Blue Whale to invest £10,000 a month into its own growth fund to show why regular investing pays off

By Angharad Carrick For This Is Money

The Blue Whale Growth fund is managed by Stephen Yiu

Investors are often told to think long term and invest regularly – and now a popular fund has decided to prove why they should… by investing in itself.

Blue Whale Growth, which has proved a hit with investors since its launch in 2017, will gradually invest £120,000 over the next year into its own fund.

The LF Blue Whale Growth Fund, which is managed by Stephen Yiu and backed by Peter Hargreaves, one of the entrepreneurs who founded Hargreaves Lansdown, has a concentrated portfolio of 25 growth companies.

It has announced plans to invest £10,000 per month over the next 12 months into the fund as a pound-cost averaging exercise.

Pound-cost averaging is the idea that making regular contributions to your investments can help to ride out market volatility and protect your portfolio.

Blue Whale said: ‘Whilst volatility prevails, individual investors find themselves hamstrung as they await either better news, or further sell-offs.

‘With cash deposits being eroded by inflation, investors are looking for a way to put their money to work that doesn’t guarantee inflation-based losses.

‘Those that would like to make a decision on what to do with their savings can dedicate themselves to spread out a lump sum investment over a period of months. In doing so they will be partaking in pound-cost averaging, hopefully smoothing out the volatility during the period over which the investment will take place.’

The fund will also be asking investors to ‘call the bottom’. Asking them whether, at any point over the next 12 months, they believe the market has reached its lowest point.

It aims to demonstrate just how hard that is compared the benefits of long-term regular investing. 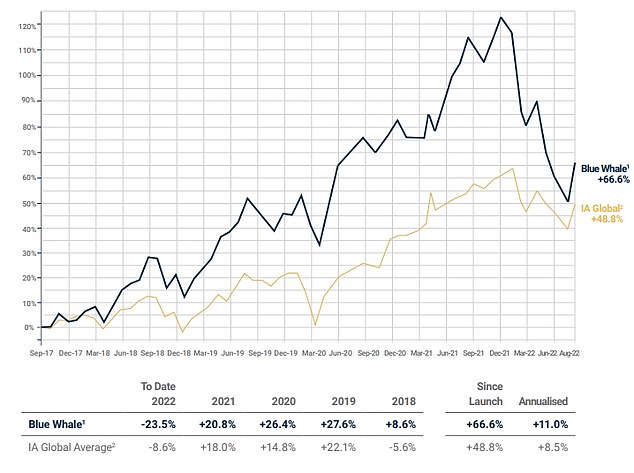 The LF Blue Whale Growth Fund has largely outperformed the IA Global Average sector since its launch in 2017 but was down 30.3 per cent in the first half of the year.

This underperformance of the £950million fund has largely been due to the higher technology exposure in its portfolio of 25 companies.

But the manager has been repositioning it to take into account changing conditions and business strategies.

Yiu has already dumped leading tech stocks this year, including Amazon and Facebook owner Meta, which he said was spending too much on a speculative push into the metaverse, and last month sold Blue Whale’s position in Google’s parent company Alphabet.

His view was that its advertising revenue would be squeezed by the consumer downturn and less people searching to buy things online.

It now no longer invests in any Faang companies – as Facebook, Amazon, Apple, Netflix and Google are known.

Tech exposure remains in its top ten though, with chipmaking and computer processing specialists ASML and Nvidia, global tech platform Intuit and Microsoft among big holdings.

PayPal was also a key disposal for the fund amid concerns over the company’s strategy relating to acquisitions, as well as increased competition.

In an update to investors last week, Yiu said: ‘Looking forward, whilst the first half of the year has been characterised by inflation and interest rate risk, we anticipate that the inflation narrative will taper off whilst we head towards greater recession risk.

‘As the cost of capital is likely to remain high, the Blue Whale portfolio of companies maintains a net cash balance sheet, with high gross margins and strong pricing power.

‘The relative valuation of high-quality tech businesses in the portfolio is attractive when compared to those sectors which have done comparatively well in the first half – sectors such as consumer staples which now trade at a significant premium to the market. We therefore hope to see a return to outperformance on a relative basis at least in the coming months.’