EXCLUSIVE: Brad Fittler pulls a switch at NSW training with Stephen Crichton running at centre – despite Jack Wighton supposedly getting the nod as coach begins mind games ahead of clash

By Sam McPhee and Andrew Prentice For Daily Mail Australia

The mind games have officially started ahead of the State of Origin series opener on June 8 – with Stephen Crichton training in the centres for the NSW Blues.

On Tuesday morning at Coogee Oval, Daily Mail Australia spotted the Panthers star, 21, partake in numerous drills on the right edge next to his club teammate Brian To’o.

It comes just 24 hours after coach Brad Fittler told a scrum of reporters Canberra skipper Jack Wighton would partner Kotoni Staggs in the centres versus Queensland in game one.

Crichton was a shock selection in the 14 jumper, with Wighton deemed the ‘safer’ utility choice in the eyes of many.

Crichton played his junior footy at fullback and sealed his club’s 2021 NRL premiership with an intercept try from the wing against South Sydney last October – but covers less positions than the versatile Raiders captain.

Despite being named as the utility option off the bench, Panthers star Stephen Crichton (pictured) may start for NSW in the State of Origin series opener on June 8 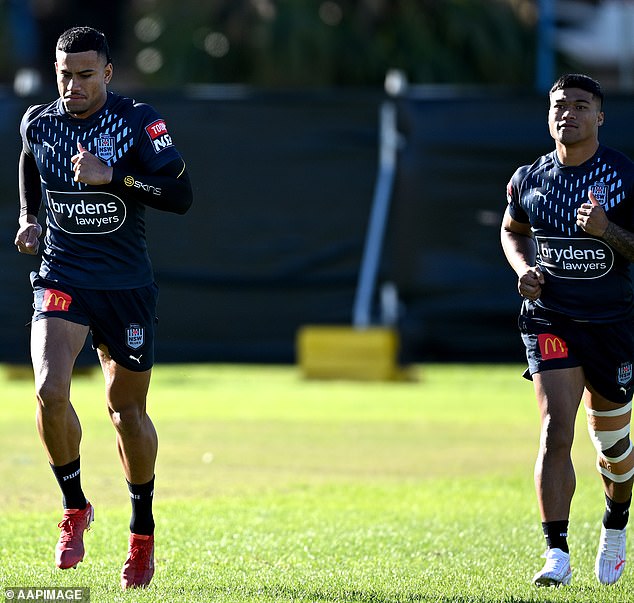 On Monday, NSW coach Brad Fittler told a scrum of reporters Canberra skipper Jack Wighton would partner Kotoni Staggs in the centres versus Queensland in game one – but Crichton (left) was running inside Brian To’o (right) on Tuesday

In Tuesday’s session in Sydney’s east, it was Crichton on the right side between his Penrith teammates Nathan Cleary and To’o – a possible early indication Fittler is prepared to play mind games with opposite Billy Slater when it comes to his selections.

The absence of incumbent centres Tom Trbojevic and Latrell Mitchell meant NSW were forced to look to debutants Crichton and Broncos x-factor Staggs to fill the significant void.

If Tuesday’s session is anything to go by, it will be Crichton who starts on a Penrith- laden right edge, with Yeo, Cleary and To’o in the starting side and back rower Liam Martin to add impact off the bench.

The Panthers stars ran through set plays effortlessly during the opening Blues session, their timing impeccable in what could be a telling advantage for NSW next Wednesday night at Accor Stadium.

Wighton meanwhile spent the majority of training through the middle, rotating through first, second and third receiver.

It could well be an indication he will replace Yeo in the lock position when his number is called in game one. 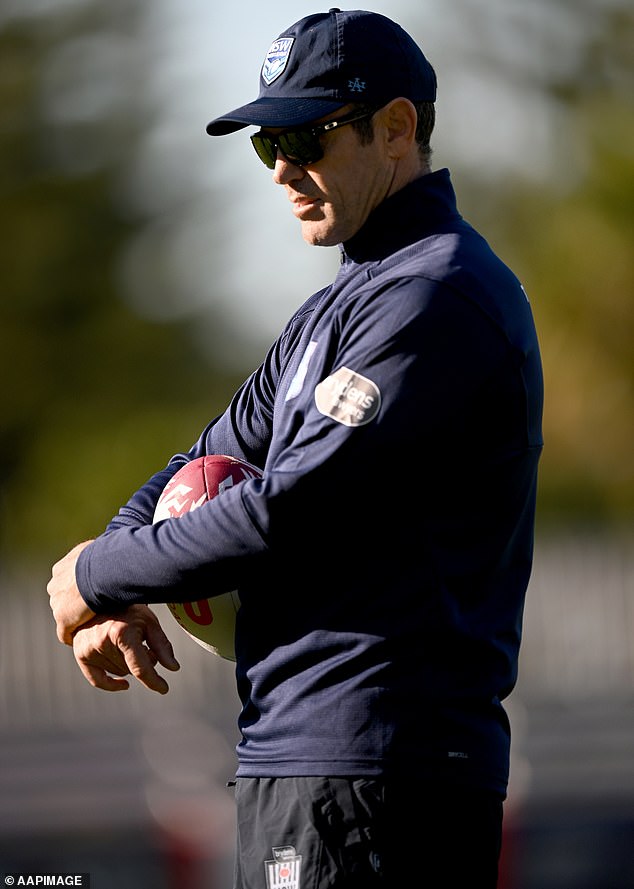 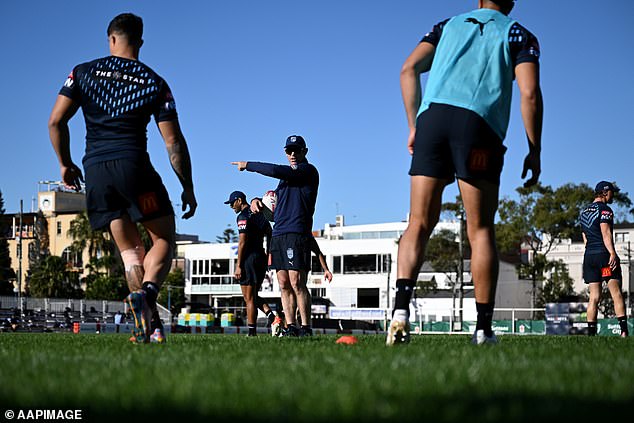 Fittler knows his centres need to fire, with Valentine Holmes and Dane Gagai proven performers in the representative arena for Queensland.

‘Our centres will have a big job on their hands and (will) have to come up with some big decisions.’

Fittler also said the side would need to play differently than the 2022 series due to Trbojevic’s recent season-ending shoulder injury.

The Manly fullback was given licence to roam in a dangerous floating role last series, and the Maroons were unable to contain his brilliance.