Five boxes of documents relating to the Guildford pub bombings have been destroyed, Surrey Police have admitted.

The blunder was blamed on a driver who left them in the wrong place, a pre-inquest review at Woking Coroner’s Court heard.

A coroner is considering whether to resume a full inquest into the 1974 IRA attacks.

Gerard Conlon, one of the Guildford Four, is released by the Old Bailey in 1989 after his conviction for being one of the bombers was overturned 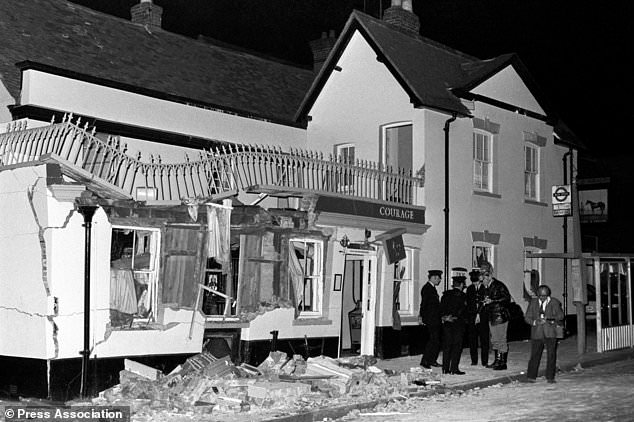 Four soldiers were killed and dozens of people were injured when a bomb went off at the Horse and Groom pub on October 5, 1974

Original proceedings did not conclude after the Guildford Four were convicted over the bombings, which killed four soldiers and a civilian and injured dozens more.

They were handed life sentences, but had their convictions overturned in 1989, and their case became one of the best known miscarriages of justice in British legal history.

Jeremy Johnson, representing Surrey Police, said on Thursday that 3,895 documents have been catalogued over the past year, and it could take years to assess the remainder.

‘It’s known that five boxes of material have been destroyed, but they contain documents which, at least to a large extent and possibly to a complete extent, are copied elsewhere,’ he said.

He said the boxes were requisitioned on November 7 2016 to address media enquiries before being returned to the store on December 8. 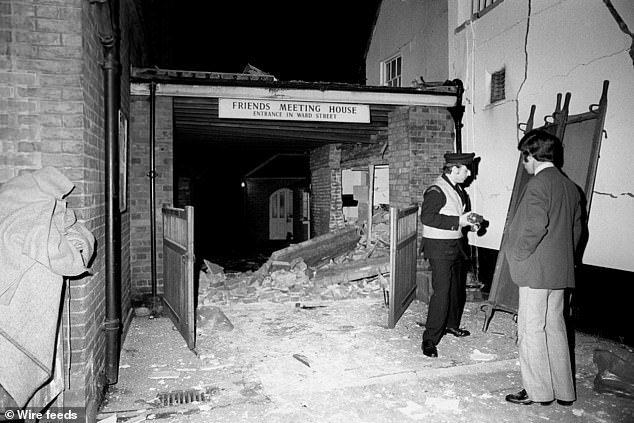 ‘The driver who returned them erroneously left them in the wrong place and they were collected by a contractor and destroyed.

‘That obviously should not have happened and that matter was referred to the information commissioner at the time.’

Brenda Campbell QC, representing the family of Ms Hamilton, said: ‘Their journey over the last 45 years as a family, and generations of the same family, is a very private one.

‘They neither seek nor do they receive the limelight.

‘They do not make this application lightly. They are aware it could increase the pain of their journey.’

Ms Campbell said they have pored over a yellowing scrapbook of newspaper cuttings, articles and photographs they collected in a bid to search for answers, and spoke of a ‘deep void’ of information.

She told the coroner they had not been involved in the criminal trial or a five-year public inquiry carried out by Sir John May, and are left asking basic questions about how Ms Hamilton died.

One example given was a discrepancy between whether the bomb went off at 8.30pm or 8.50pm.

‘But it is the big questions and the small questions that remain entirely unanswered for the purposes of this inquest.’

Ms Campbell said the confessions of two men – who admitted involvement but were not charged over the bombings – have never been the ‘subject of any independent, meaningful investigation’.

Surrey Police force said in a statement it ‘neither requests nor opposes the resumption of inquests’ and the case is not being ‘reinvestigated or made subject to a formal review at this time’.

Mr Johnson told the coroner: ‘I would submit the focus is not on questions such as who planted the bombs, what were the bombs made of, what did the police get wrong in their original investigations.

‘The focus is to be on the statutory questions an inquest is meant to answer and whether or not there is a practical proposition of throwing new light on these questions after all these years.’

Coroner Richard Travers said he would hand down his judgment on whether to resume a full inquest on January 31.