A BMW driver died after his car crashed into a bollard and burst into flames in north London.

The man was pronounced dead at the scene at 9.21am and two passengers were recovered from the car.

One passenger was taken to a central London hospital and their condition has not yet been confirmed.

Metropolitan Police were called to the incident at Dollis Hill Lane at the junction with Brook Road, north west London, and the road remains closed.

The driver of the BMW crashed into a bollard and died at the scene of Dollis Hill Lane at the junction with Brook Road, north west London

A Met Police spokesman said: ‘Police were called at 9.08am on Saturday 7 December to reports of a car in collision with a lamp post on Dollis Hill Lane at the junction with Brook Road, NW2.

‘Two people were recovered from the vehicle.

‘The male driver was pronounced dead at the scene at 9:21am. 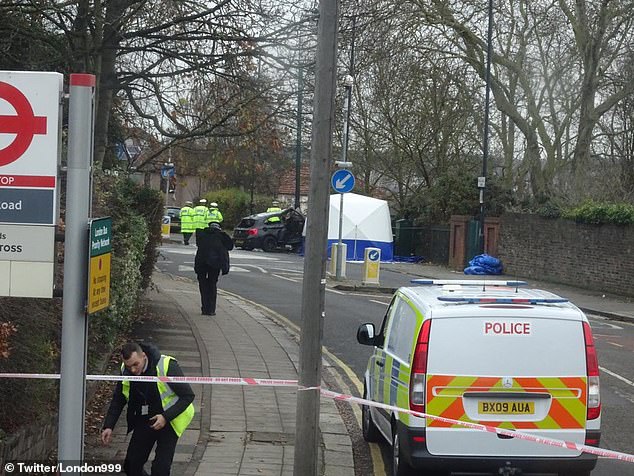 ‘Next of kin are yet to be informed and the passenger has been taken to a central London hospital.’

‘We await an update on his condition and road closures are in place.’