Boat capsizes and captain is rescued by surfer, 13,

By Hannah Parry For Dailymail.com

Dramatic drone footage has captured the moment a small boat capsized off the Florida coast and the daring rescue by a 13-year-old surfer.

Video captured the boat while it navigated through the Jupiter Inlet during very dangerous weather conditions on October 27.

‘The wind was blowing in at 20+ miles per hour, that inlet can be treacherous,’ said the drone pilot, Kevin Cadby.

The drone captured the moment a huge wave came up behind the vessel and plunged it nose first into the waves. 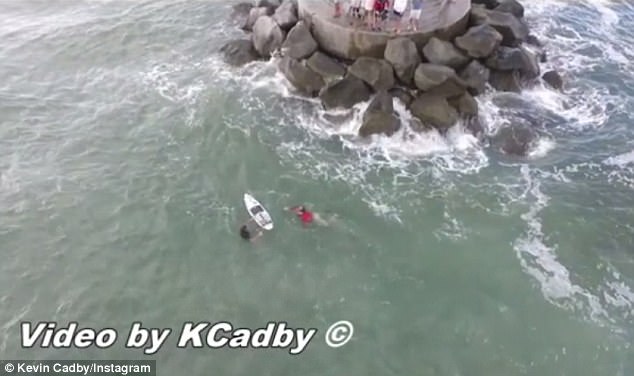 The captain, who was able to swim free of the wreckage was rescued by brave young surfer Sam Ruskin who offered him his board

Immediately, the boat overturned and sank, but the footage showed its captain, who appears to have been the only person aboard at the time, managed to swim free of the wreckage.

The man, who stood out against the ocean in a bright red shirt, began swimming to a nearby outpost of rocks – a dangerous move in choppy seas – before brave young surfer Sam Ruskin intervened.

Ruskin risked his own life to paddle out next to the boat captain and offered him his surfboard.

The boater quickly climbed aboard and swim back to shore on the board, while the 13-year-old surfer swam alongside.

‘It’s really strong, I was swimming next to him so I was just kind of struggling, trying to get out of the area because you can get sucked into the jetty,’ he said.

‘Just speaks about his character,’ Ruskin’s father said. ‘He didn’t even blink an eye, jumped off his board, handed it to a grown man, saved his life.’

The boater, who made it safely back to shore, is said to be doing fine.

Meanwhile, Cadby said he continued flying his drone over the area the boat had capsized to ensure no-one else had been aboard.

‘My first concern was to make sure nobody else was on the boat,’ Cadby said.