Costass, seen on the field prior to Super Bowl XLVIII, spoke out about not hosting this year

Bob Costas has doubled down on his remarks about concussion risks to NFL players, saying the decision not to appear on air for Super Bowl LII was mutual.

‘The decision was mutually agreeable, and not only do I not have a problem with it, I am actually happy about it,’ he said in an email to Sports Business Daily on Wednesday.

‘I have long had ambivalent feelings about football, so at this point, it’s better to leave the hosting to those who are more enthusiastic about it,’ Costas said.

The announcement on Monday that Costas, 65, had been removed from NBC’s Super Bowl coverage had many speculating that he’d been yanked over his remarks in November that football ‘destroys people’s brains’. But Costas dismissed the notion that those remarks had anything to do with the decision.

‘I have been making the same points for several years, often on NBC,’ Costas said in his email on Wednesday.

‘In halftime commentaries, interviews with Roger Goodell and other prominent NFL figures, appearances on CNN and elsewhere, I have addressed the issue of football and its undeniable connection to brain trauma many times. Why? Because the evidence is overwhelming and the effects are often devastating,’ he continued.

‘It’s the elephant in the stadium at every game whether others choose to acknowledge it or not. And it’s not going away. So the idea that I am only now finding my voice on this, or that NBC was taken aback by what I said at Maryland is just wrong. It’s all simple and straightforward,’ Costas said. 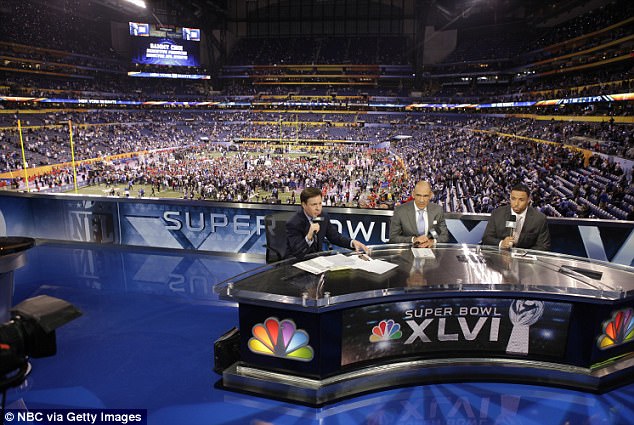 Bob Costas (left) is seen hosting Super Bowl XLVI in 2012. On Monday, NBC said they would not be bringing him on to host this year, a decision he now says was mutual

Costas had been expected to remain a host his seventh Super Bowl on February 4 after he stepped down as the long time host for the Olympics last February, because his replacement Mike Tirico would be in South Korea.

Yet when NBC announced its on-air team for Super Bowl LII on Monday, Costas was not in the line up.

Instead, NBC named Dan Patrick and Liam McHugh as hosts of the Super Bowl pregame show, which also will include Football Night in America’s Tony Dungy, Rodney Harrison, Mike Florio and Chris Simms.

NBC said it was Patrick and McHugh’s success throughout the year that had seen them replace Costas.

‘Dan and Liam have served as hosts for our NFL pregame/studio shows on Sunday nights and Thursday nights, respectively, throughout the season and will continue on Super Bowl Sunday,’ the network said in a statement, according to the New York Post. 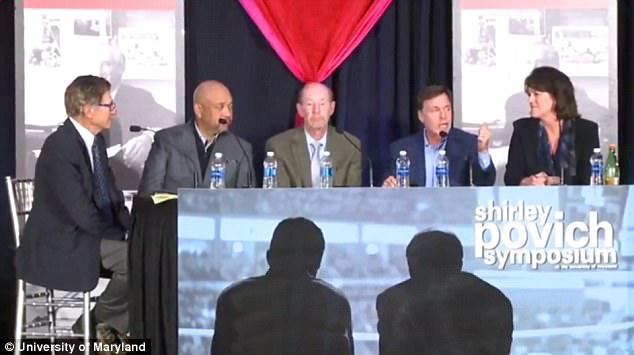 The famous NBC sportscaster had addressed the NFL’s future during this panel at the University of Maryland in November, declaring that the game’s entire existence is in jeopardy

Costas said he supported the decision, adding that: ‘Dan and Liam have done the job hosting NBC’s NFL coverage all season. It wouldn’t be right for me to parachute in and do the Super Bowl.’

The famous NBC sportscaster had addressed the NFL’s future during a panel at the University of Maryland in November, declaring that the game’s entire existence is in jeopardy.

‘The issue that is most substantial, the existential issue, is the nature of football itself,’ Costas said at the Shirley Povich Symposium, which is named for the late Washington Post sportswriter. ‘The reality is that this game destroys people’s brains.’

Costas anchored NFL broadcasts for years and works for a network that currently has a media deal with the league, but that did not deter him from addressing chronic traumatic encephalopathy (CTE) – the long-term degenerative condition that afflicted a number of deceased football stars such. 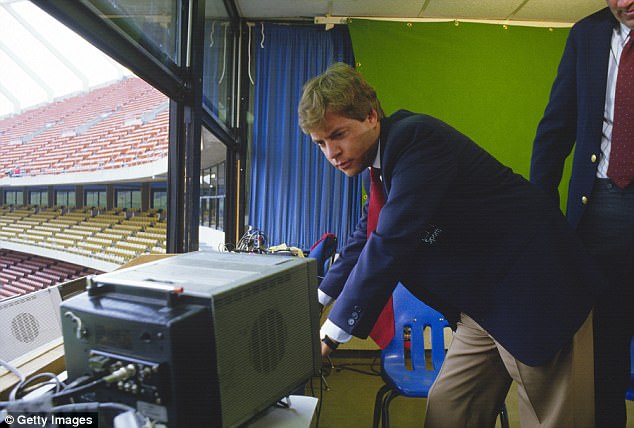 ‘You cannot change the basic nature of the game,’ Costas said, according to The Washington Post.

‘I certainly would not let, if I had an athletically gifted 12- or 13-year-old son, I would not let him play football.’

CTE was first researched in the early 2000s by coroner Bennet Omalu, and the NFL has responded by strengthening its concussion protocol over the years.

Last year, the NFL signed a $1 billion settlement with former players who are suffering neurocognitive disorders connected to football.