Disney CEO Bob Iger has said that his company would have considered a merger with Apple if Steve Jobs were still alive.

‘I believe that if Steve were still alive, we would have combined our companies, or at least discussed the possibility very seriously,’ Iger wrote in an excerpt from his autobiography published by Vanity Fair on Wednesday.

Iger and Jobs became close friends prior to the Apple co-founder’s death from pancreatic cancer in 2011.

In 2006, Iger, then just a few months into his tenure as Disney CEO, helped shepherd a massive $7.4 billion deal to acquire Pixar, the film animation company where Jobs was chairman.

Following the deal, Jobs became Disney’s largest single shareholder and a member of the company’s board of directors.

Even as Jobs oversaw the launch of the iPhone at Apple, he developed a close relationship with Iger and became a key advisor at Disney.

Iger recounts how Jobs, though he had no interest in comic books himself, played a key role in Disney’s acquisition of Marvel by vouching to the Marvel CEO that Iger was a man of his word.

Following Jobs’ death, Iger was one of only about two dozen to attend his burial in Palo Alto. 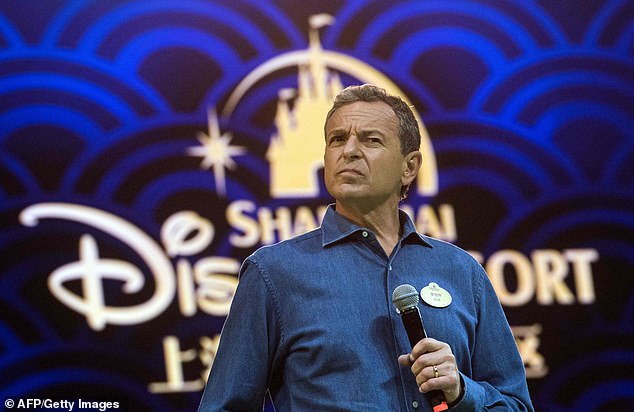 Bob Iger is seen at a press event in 2016. In a new autobiography he says he believes his company would have merged with Apple if Steve Jobs were still alive

Since then, he writes, he has often thought of Jobs at key points in Disney’s company history.

‘With every success the company has had since Steve’s death, there’s always a moment in the midst of my excitement when I think, I wish Steve could be here for this,’ Iger writes.

‘It’s impossible not to have the conversation with him in my head that I wish I could be having in real life. More than that, I believe that if Steve were still alive, we would have combined our companies, or at least discussed the possibility very seriously.’

Currently, Apple has a market capitalization of more than $1 trillion. Disney’s market cap is about $246 billion.