Bode Miller’s wife, Morgan Beck, has shared an adorable video of her two-month-old twin sons smiling up at her after they just woke up in a rare glimpse of the newborns.

The couple welcomed the newest additions to their family in a dramatic fashion on November 8 in their home, and then took more than six weeks to reveal the twins’ names: Asher and Aksel.

Now Morgan, 32, is showing the world how the twins already have their smiles down pat in an adorable clip.

Big grins: Bode Miller’s wife, Morgan Beck, has shared an adorable video of her two-month-old twin sons smiling up at her 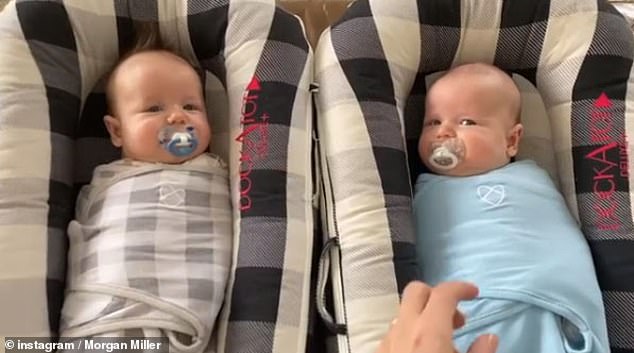 Cuties: The nearly minute-long video shows the twins swaddled in side-by-side infant loungers with pacifiers in their mouths 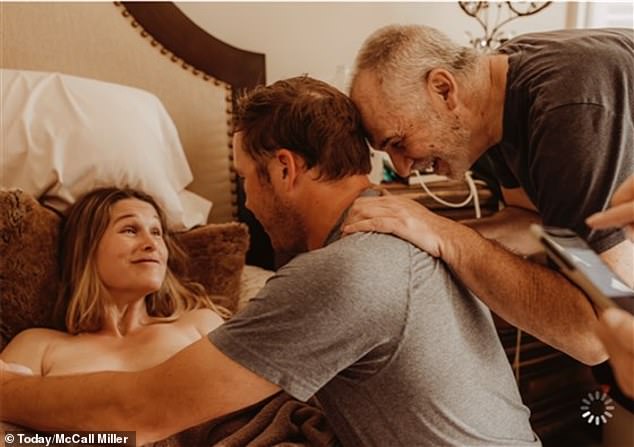 Bundles of joy: Morgan and former Olympic ski racer Bode Miller, 42, welcomed the twin boys on November 8 in their home

‘Just because this needs to live here permanently,’ Morgan wrote in the caption Tuesday when sharing the video.

The nearly minute-long video shows the twins swaddled in side-by-side infant loungers with pacifiers in their mouths.

‘Gonna go like this,’ Morgan is heard cooing in the video. ‘Anyone ready for some smiles?’

She then gently took out each of the twins’ pacifiers so they could smile up at their mom with identical grins.

The video goes on with Morgan continuing to encourage her twins to smile up at the camera. She is also heard saying, ‘I love you. Oh, are we talking? Oh my goodness.’

Sharing the video of the twins grinning up at their mom is only the second time Morgan’s posted content of her twins on her Instagram page since welcoming them on November 8.

At the time, the doting mother described the baby boys as a ‘gift’ from her late daughter Emmy, who drowned in a tragic accident at their home in Texas in June 2018.

Morgan and Bode, 42, later revealed that they struggled to name their twin boys after they welcomed them in November; according to the parents, it was a constant battle within their home for what the names should be. 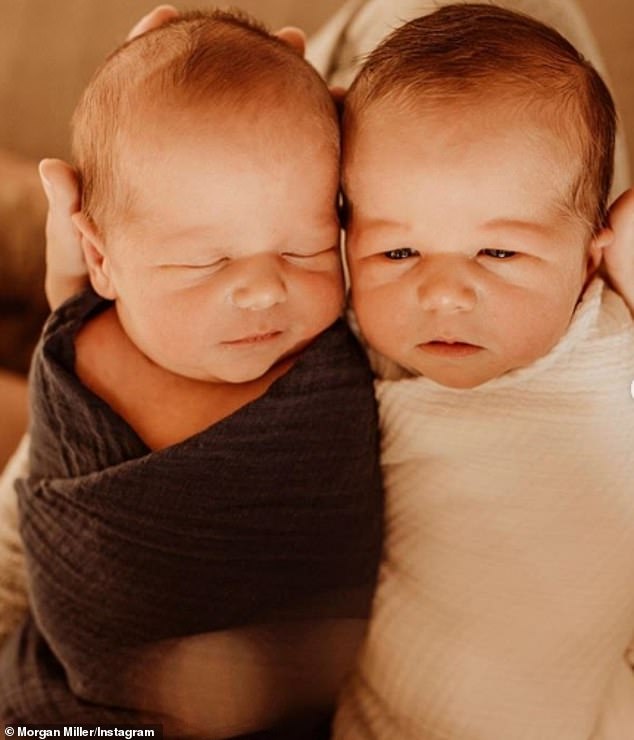 It’s settled! It took the couple weeks to settle on the names for the two boys 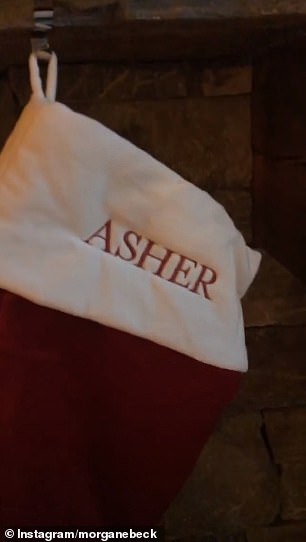 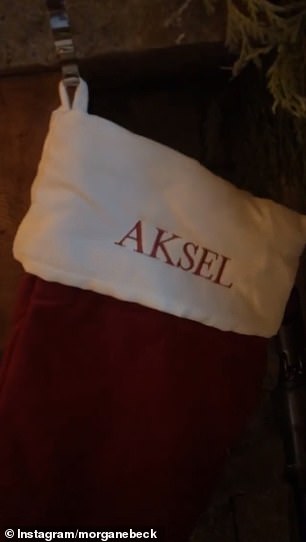 Ta-da! They’ve named the twins Asher and Aksel — and says it’s official because they have stockings 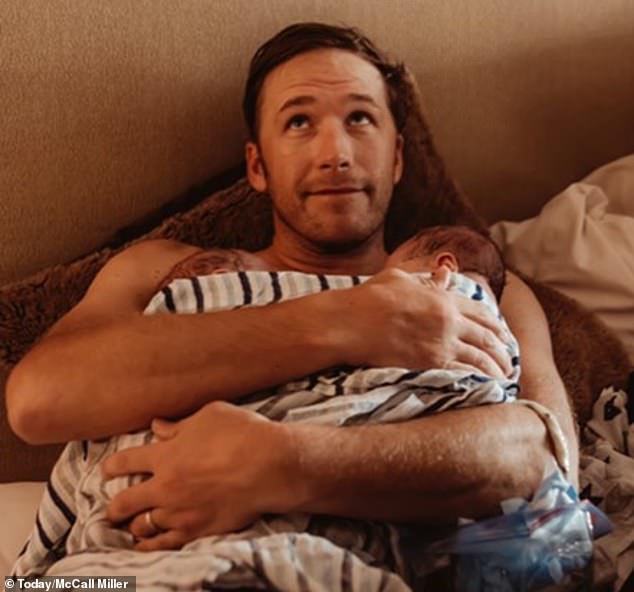 Then the couple announced on the Today show ahead of Christmas that they decided on the names Asher and Aksel.

For the most part it’s official because they have stockings with their names on it,’ Morgan said at the time: ‘We still go back and forth.’

The couple had no problem when naming their two sons, four-year-old Nash and 10-month-old Easton, or their daughter Emeline, who tragically died in a drowning accident in June 2018.

But Bode previously had a battle when naming his six-year-old son Samuel, whom he had with his previous girlfriend Sara McKenna, a former US Marine.

Sara got pregnant with Samuel just three months into dating Bode, and the former Olympic skier told his girlfriend he thought they should raise the child separately instead of together.

The exes entered into a custody battle two weeks after Sara gave birth to Samuel, and she lost custody of the child; Bode and Morgan then started referring to his son as Nathaniel instead of his given name.

Eventually Sara regained custody of her son and it was agreed by the pair to call the child by his given name instead of Nathaniel — although the name game played a large role in the legal fight between the two parties.

‘Neither of us got exactly what we wanted, but Sam got what he needed and that’s what’s most important to me,’ Sara told Page Six at the time. 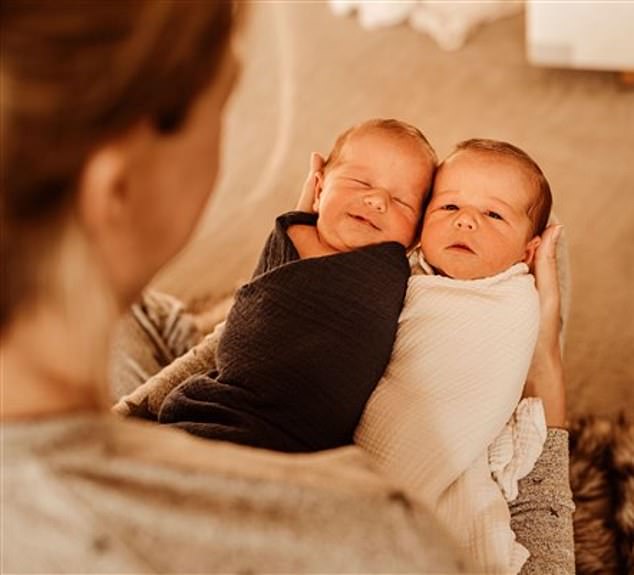 Generic: They had been calling the twins Baby A and Baby B before settling 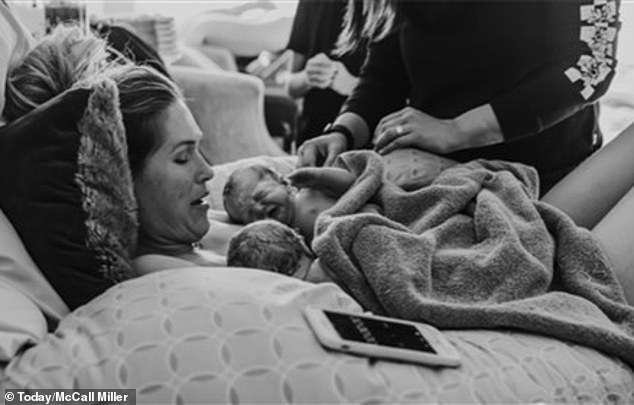 Problems: The couple had confessed that they had trouble agreeing on names this time around 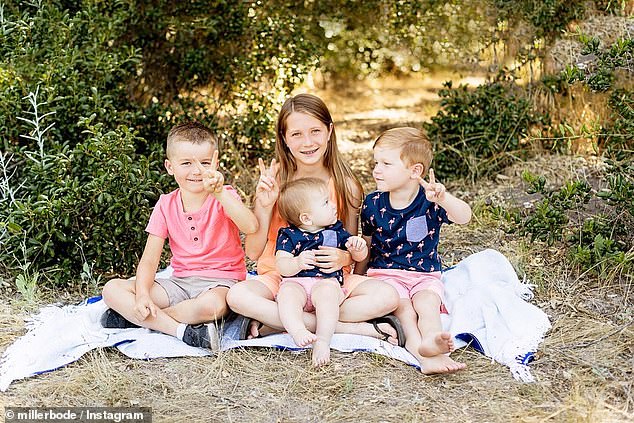 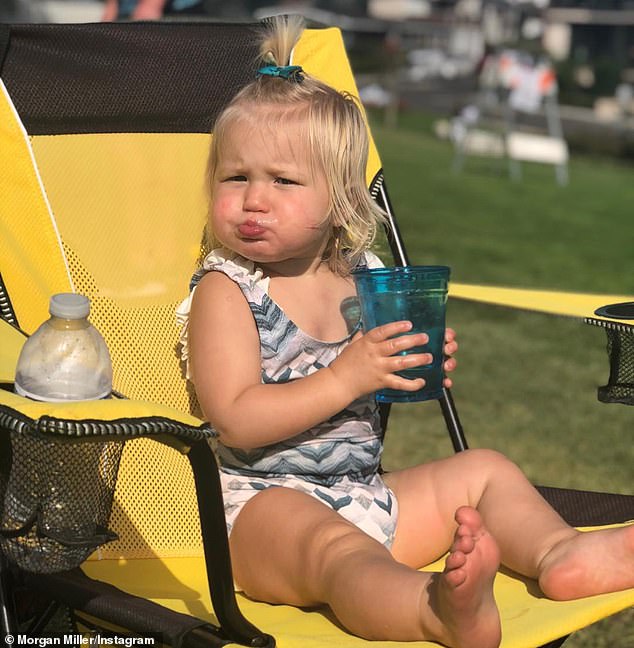 Tragic: The couple also had a daughter named Emmy, who drowned in a neighbor’s swimming pool in June last year when she was just 19 months old

Bode also has a daughter named Neesyn, 11, from a previous relationship.

The family has not announced a change to Asher or Aksel’s names, so it seems they’ve stuck for the two-month-olds.

They took quite a long time to name the boys, and had been calling them Baby A and Baby B for weeks before settling on the names. But by now, Morgan added, they have distinct personalities.

‘They’re very different. Asher is much more needy. He loves the attention. He loves being snuggled,’ she said. ‘Whereas Aksel is much more like, “I’m okay if you’re okay. And even if you’re not okay I’m still okay.” So he’s just much more mellow.’

‘Seeing them together is one of the craziest things where you see they hold hands, and they interlock arms,’ Bode added.

Bode and Morgan also spoke a bit about their daughter Emmy.

‘And then that obviously comes with the question of, “Well, where’s your other child?” And you will respond with, “She drowned.”

‘It’s hard not to feel like, “God, I’m a bad parent.” And answering that question is really hard. I cry every single time, but we get that message out,’ she added.

She did say, however, that they’re on a path to healing.

‘It’s not ever anything that will completely go away, and that pain is always gonna be there.

‘However, there are parts that you don’t realize that need to be healed, that you do discover through spending time with your kids and traveling and doing all these amazing things, you do get healed. You just figure out how to live with it and keep moving forward.’