Video has been released of the moment a Kentucky police officer fired five shots through the windshield of his patrol car at a suspect – a move some people are calling ‘reckless’.

On Tuesday, robbery suspect Demonjhea Jordan was shot at least 20 times as he fled from police down a residential street in the Portland neighborhood.

Jordan, of Jefferson, Indiana was accused of robbing a Metro PCS store. Three officers from the Louisville Metro Police Department, as well as a detective, responded to the robbery call. All four opened fire at Jordan hitting him multiple times.

The 21-year-old died at University of Louisville hospital from gunshot wounds, a Jefferson County coroner said. 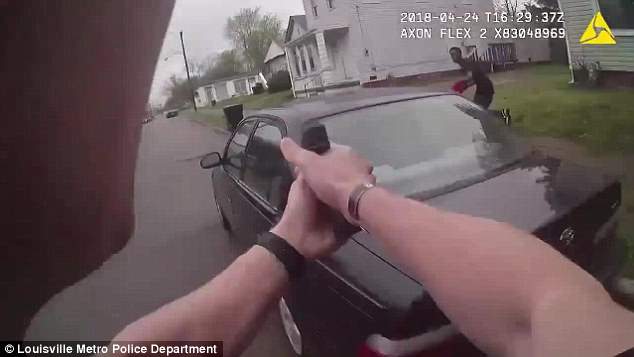 Another videos shows a second officer firing multiple shots at the suspect, 21-year-old Demonjhea Jordan, as he fled 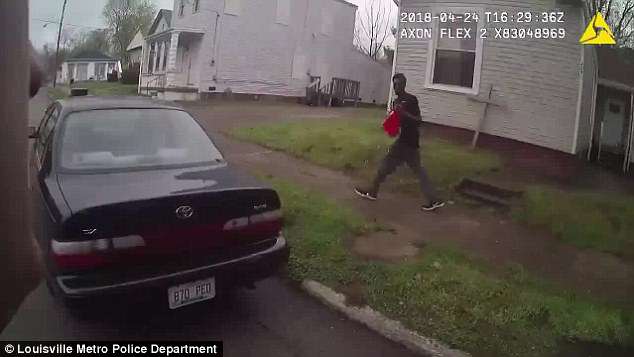 The videos were released one day after Jordan died from multiple gunshot wounds. Police said Jordan was suspected of robbing a Metro PCS store in the Portland neighborhood in Kentucky 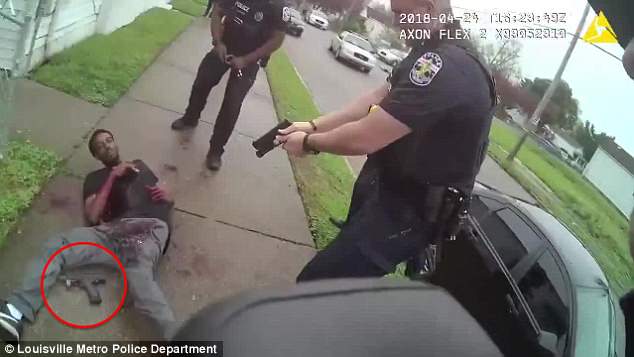 Police said Jordan reportedly fired at officers as he fled. A gun was found between his legs as he was lying on the ground wounded

During a news conference on Wednesday, the police department played videos from three of the officer’s body cameras.

In one video an officer pulls up to the scene and before he even stops his patrol car, he draws his weapon sending five shots through his windshield. The suspect appears to be already on the ground before the cop fires.

As the cop gets out of his car, he yells for Jordan to show his hands. 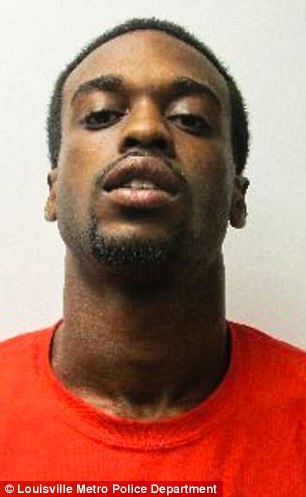 Jordan, from Indiana, died at a Louisville hospital from gunshot wounds, a coroner said

‘I was led to believe that the bullet’s trajectory could change or be deflected when going through a windshield,’ he said. ‘There’s also the element of shattered glass too. It sounds bizarre.’

Couper acknowledged that different police tactics are useful for different situations, but said the officer could have rolled down a side window or took cover behind a vehicle before firing.

‘It sounds hazardous, but I imagine the police force would defend the decision,’ he told the outlet. ‘There are two things you need to ask: Is this consistent with training or not? And was this a last-ditch method to save your life or the life of another person?’

Nicolai Jilek, an officer with the Louisville Metro Police Department and the president of the city’s police union, said shooting through a windshield can be useful in a life or death situation.

‘When you’re in your car you’ve got your seat belt on, equipment on and you have a steering wheel,’ he told the outlet. ‘If you can, you want to return fire from the car as quick as possible’. 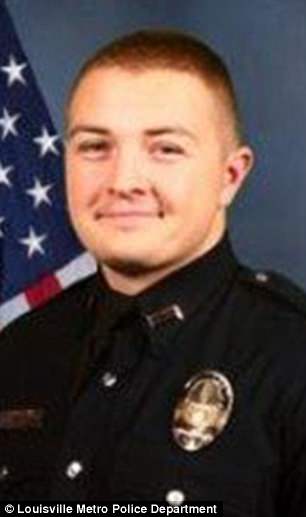 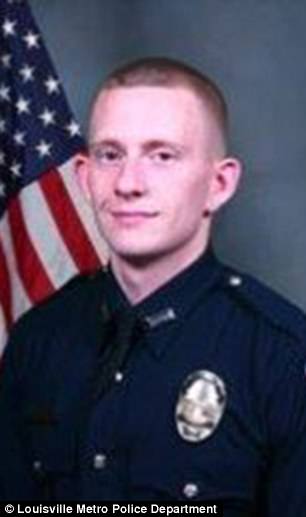 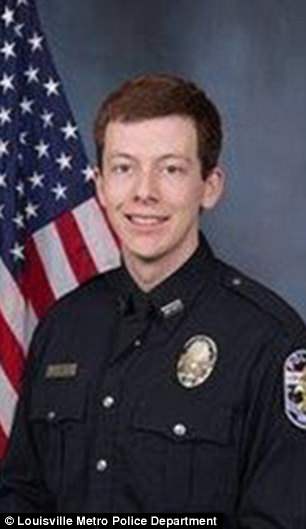 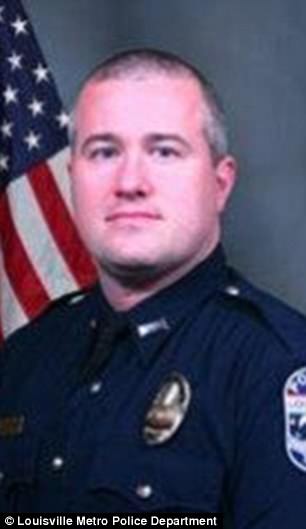 Lt. Aaron Crowell with the department’s public integrity unit said they believe Jordan, who had a gun on him, shot at the officers but it’s not clear who opened fire first.

It’s also not clear in the body camera videos if Jordan did in fact use his weapon as he fled. His gun was found between his legs as he was lying on the ground wounded.

‘They’re trying to train us to shoot through our windshield if we need to,’ Jilek told the Courier Journal. ‘If you feel threatened and you’re in immediate danger, it can be effective. I think there has been some tactical observations and research that shows officers are concerned with getting out of their own cars safely in those situations.’

A second body camera video released Wednesday shows one officer pulling up to the scene and jumping out of his car as he fires shots at Jordan.

A third video shows another cop firing multiple rounds at Jordan as he flees down the street. As the officer pursues Jordan the cop yells: ‘I think I’m hit’.

Crowell later confirmed that the officer was not shot during the incident. The detective who also opened fire at Jordan was not wearing a body camera.

The officers involved in the shooting have been identified as Joshua Weyer, Kody Despain, Benjamin Dean and detective Joseph Fox. Officials did not reveal which officer fired through the windshield. 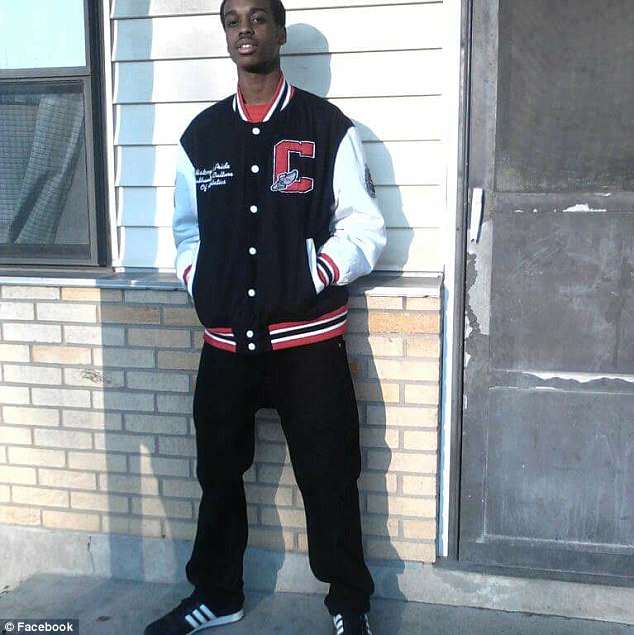 They have all been placed on administrative reassignment as the department’s public integrity unit investigates the shooting.

Jordan’s mom, Natalie Malone, told WAVE3 News that she knows her son made a mistake but she wants to know why police shot at him so many times. She also questioned why officers placed handcuffs on him while he was on the ground.

Police Chief Steve Conrad defended his officers’ use of deadly force, based on the preliminary investigation.

‘This is a dangerous job. We know that coming into the job,’ he said during the news conference. ‘We hope and pray we never have to use deadly force, but this is a situation where officers were confronted with deadly force and they responded in a manner – at least based on the preliminary investigation – consistent with police, practices and training.’

He said officers are able to ‘use force, in this case deadly force, to protect themselves and others from death or serious physical injury’.

He added: ‘That said, as you are firing those shots as a police officer, you are going to have to account for those shots.’