Amber Heard’s body language betrayed her conflicting emotions as she took the stand yesterday for the first time in her blockbuster defamation trial with Johnny Depp, an expert has said.

The actress, 36, finally had the chance to counter her ex-husband’s claims that he was an innocent victim of domestic abuse, as she recalled how the Pirates of the Caribbean star was repeatedly violent towards her.

The Aquaman star wept as she told the Virginia courthouse how she was repeatedly hit by the jealous Depp who performed a ‘cavity search’ on her for cocaine after ripping off her clothes, during her testimony in the bombshell trial.

Body language expert Judi James told MailOnline that it is difficult to read the emotions from the A-list case, as both of them are actors who know how to play a captivated worldwide audience.

The defendants will likely have been trained by their legal team in advance of their testimonies, but slight movements or expressions can give away their true feelings, while not fully revealing their guilt or innocence.

When Heard first took the stand, she deliberately addressed her answers smilingly towards the jury in an attempt to ‘humanize’ her and create an emotional bond.

But during the often graphic testimony, the actress portrayed her emotion by appearing to sob and scrunching her nose, without actually crying.

Her hand gestures were ‘congruous’ with her words, often used for expression before her words, which is usually ‘a sign of authenticity’, Judi said.

She also stared down Depp who escaped her gaze, which could either be seen as a dominant power play or an attempt at openness and honesty.

Previously in the trial, Depp won plaudits from viewers for his coolness and jokes on the stand, while Heard sat back silently throughout, occasionally whispering to her legal team.

But now she is giving a much more animated display, veering from smiles to sobs as she charts their volatile relationship.

Amber had been sat in the courtroom for weeks awaiting her moment to tell her side of the story.

And when she finally took the stand yesterday, she was asked to introduce herself, say her age and job and talk about why she is at court.

The actress instantly turned towards the jury to answer these questions, while Depp had been much more hunched while giving his testimony.

Judi said: ‘Amber’s direction of gaze and speech when she first takes the stand is important.

‘It is quite common for people to address their answers to the jury in the US but Amber seems to create personal connections and tie-signs quickly here, beginning by smiling in the direction of the judge before turning her head towards the jury to offer her answers to questions from the legal team.

‘Her hair is also draped to her left, meaning that the jury have a clear view of her face, both in silhouette and as she turns to address them directly.

‘The effect would be to “humanize” herself to the jury rather than isolating herself as a celebrity who they will presumably have been hearing negative comments about.’

She added: ‘It shows them a certain amount of respect to them to want to address them directly as it shows a consideration of them as being in ultimate control in terms of the verdict. It helps to build some early connections.

‘The jury also get to see her eyes and eyes tend to be considered one of the most revealing body parts in terms of inner feelings and emotions.

‘We tend to trust people more when we can see their eye expression so this gesture could suggest she has nothing to hide. It is of course in visual contrast to her ex husband at the same time, who sits hunched with his eyes hidden by tinted glasses, gazing down an writing or just communicating with his team.’ 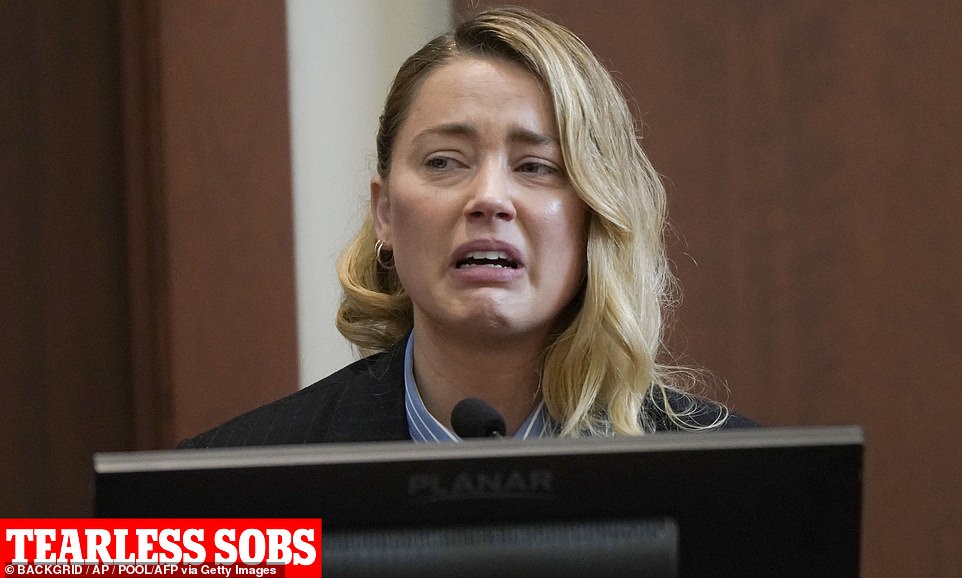 During her testimony, at times Heard became visibly emotional and appeared to sob, yet viewers pointed out they couldn’t see any tears 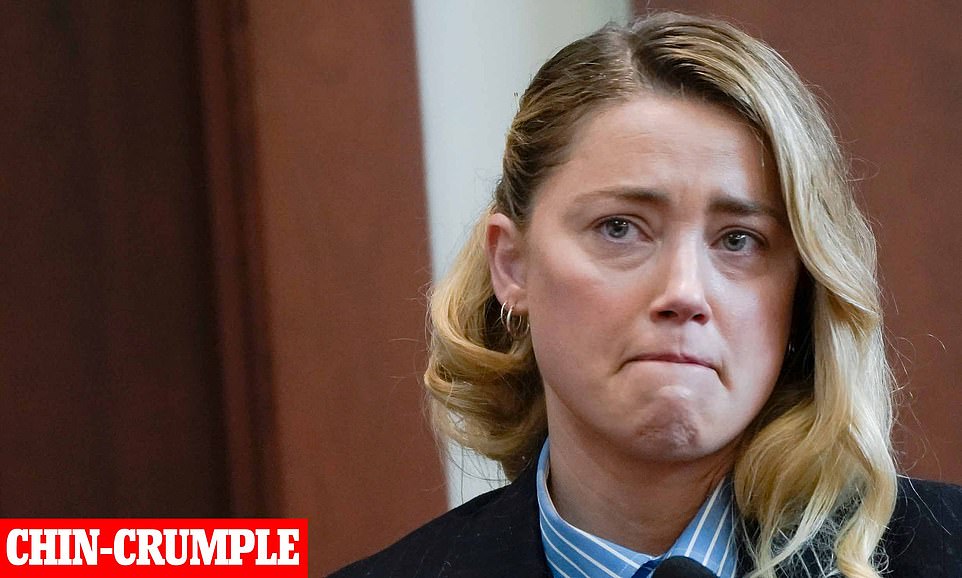 Heard attracted criticism from some who accused her of pretending to cry on the stand while she recounted the horrific allegations of abuse she suffered.

She told the court that in May 2013 she and Depp were on vacation at a trailer park in Hicksville, California near Joshua Tree where he performed ‘cavity search’ on her, looking for cocaine after he accused her of flirting with another woman.

The actress also recounted the first time she was hit by Depp after she asked him about one of his tattoos.

The actress appeared visibly emotional during these moments but some pointed out it was hard to see any tears rolling down her face.

Instead, Heard appeared to crumple her chin and tearlessly sob during the testimony to highlight her emotional state.

Judi James said: ‘The cameras made it hard to pick out if they had formed in her eyes or if her eyes had reddened. This, like everything, is a complicated point.

‘When guilty people perform tears they often try to hide their dry eyes, poking them with fingers, squeezing them shut tight or prodding them with a hankie.

‘When they do cry for real the streaming tears are often prompted by self-pity. Amber’s seemed to be truncated, but is that acting or bad acting or the innocent complex response of someone with mixed emotions?’

She added: ‘Amber’s facial expressions became more animated when she spoke about abuse.

‘She spoke in detail and her expressions seemed to range from shock and bewilderment to disgust and anger.

‘She kept her head held up and any suggestion of tears came from a change in her vocal tone and a chin-crumple.’ 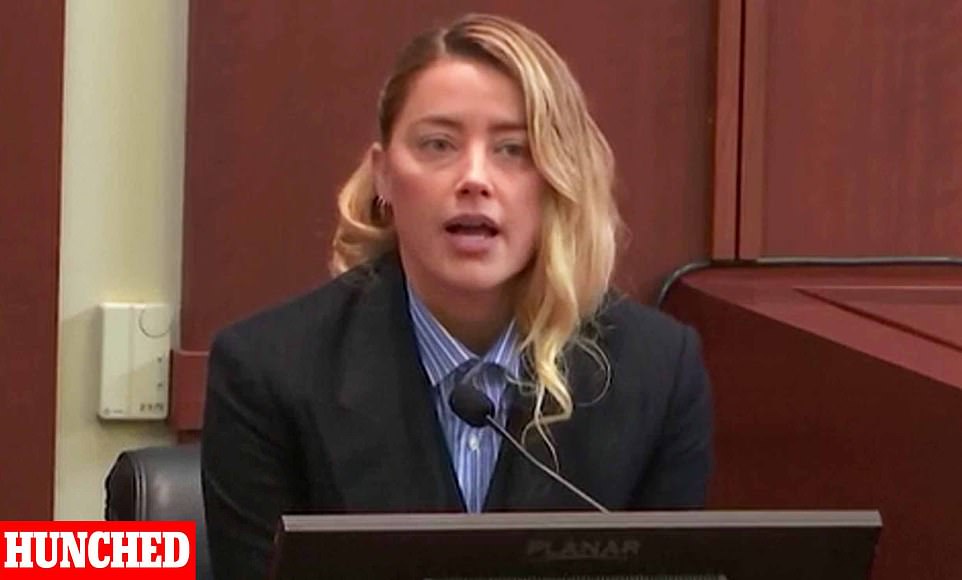 Body posture can reveal a lot about a person’s emotions, even if they have been coached to appear a certain way by their legal team.

Throughout Depp’s testimony, she appeared cold and unflinching as she sat upright in her chair listening to his claims of her abuse.

But when she took the stand yesterday, she started going more into herself.

Judi said: ‘Amber self-diminished during the first questions and hunched forward as she began to give her account.’

Similarly, during her testimony, Depp was leaning over his desk, often writing or doodling.

Judi said: ‘He wore spectacles that were tinted and which hid his eyes when he did look up. He often glanced to the guy on his right and seemed to smirk or chuckle with him at some points.

‘It looked as though he was arrogantly finding her testimony amusing or that he was bored. But it could also be translated as a hunch of subservience from a man too scared to even look his ex-wife in the eye.’ 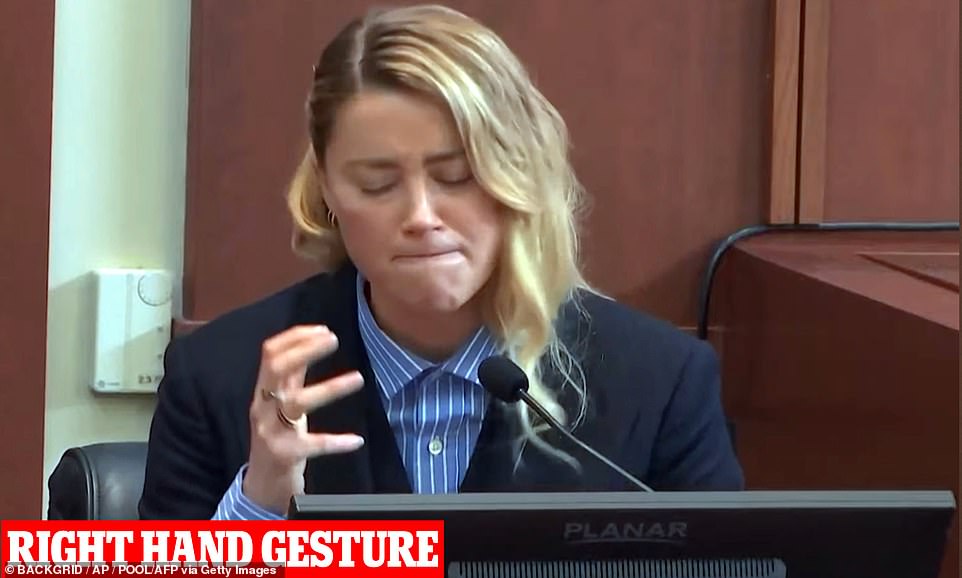 Throughout her testimony, Amber was expressive with her hands as she told in graphic detail how Depp allegedly abused her.

Judi said her gestures were ‘congruent’ with the emotions she was expressing in her evidence.

She said: ‘Her right hand was visible as she related dramatic moments from her past and in general her gestures began before her words were formed, which is usually a sign of authenticity.

‘She used whole volleys of illustrative or mime gestures as she related moments and events in detail, which would again suggest she was seeing them in her mind.’ 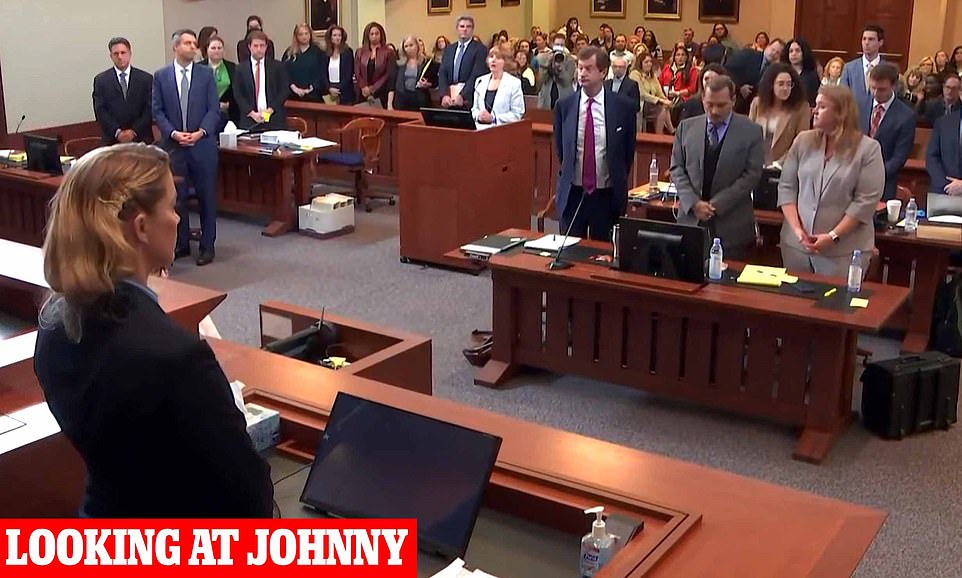 Johnny regularly avoided the gaze of his ex-wife as she took to the stand yesterday.

But in contrast, she regularly faced him down and stared at him while giving her testimony about his alleged abuse.

Judi said: ‘While Jonny rarely if ever looked at his ex-wife, who was sitting directly in front of him, she did seem to look at him.

‘This, too, can be analysed in two different ways: was it a signal of dominance and power or was it a sign of openness and honesty?’ 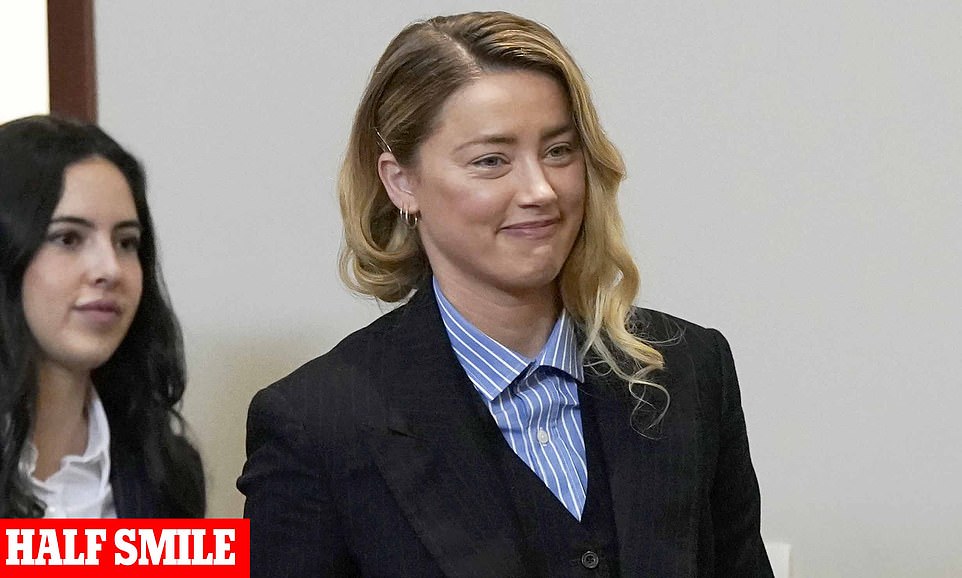 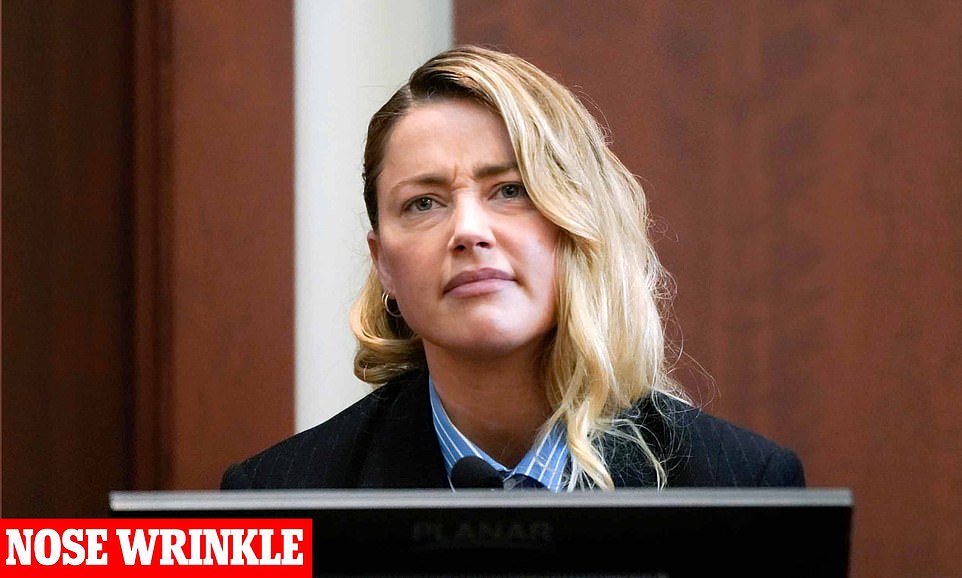 One of the tell-tale signs of Heard’s conflicted emotions was her half smile.

This showed how the actress was trying to project a sense of calm at the situation but she was not feeling fully comfortable.

Judi said: ‘We saw her talk about her childhood and her siblings and it would be true to say that her facial expressions tend to be complex, suggesting mixed emotions, even when she is talking about something that makes her happy.

‘Her smile only involved the raising of one side of her mouth.’

Judi noticed this occurred when she was ‘trying to search for the right words’, making the testimony more genuine rather than rehearsed.