Teenage tennis star Emma Raducanu showed she was ‘a young woman in almost complete command and brimming with self-control’ during her stunning US Open victory yesterday, a body language expert has claimed.

The young athlete, from Bromley, became the first British woman to win a grand slam since Virginia Wade’s Wimbledon victory in 1977, with her 6-4, 6-3 win over fellow teenager Leylah Fernandez in Flushing Meadows.

The astonishing victory followed Emma bursting onto the scene at this year’s Wimbledon, where she became the youngest British woman to reach the fourth round of the singles competition since 1959 after being handed a wildcard entry.

Body language expert Judi James told FEMAIL  Emma finished the match ‘looking like a confident but not arrogant leader’ before ‘taking control of the post-match interview’ with maturity and ‘determination.’

Expert Judi James said US Open winner Emma Raducanu’s body language during and after the match was ‘phenomenal’, and showed ‘a remarkable amount amount of self-control’ 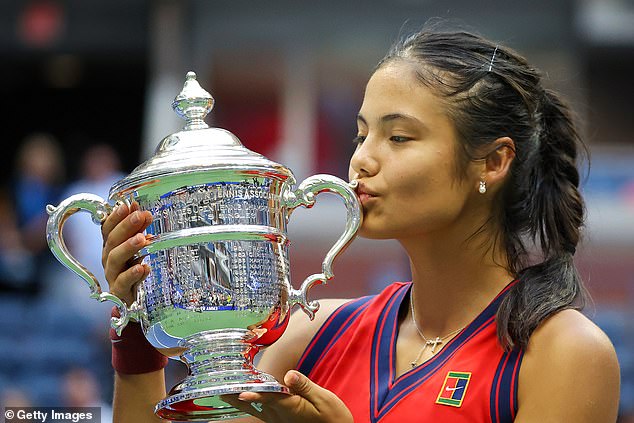 Emma finished the tournament ‘looking like a confident but not arrogant leader’, according to body language expert Judi James

Emma’s incredible performances in New York and at the SW19 tournament have seen her go from 366th in the world rankings to the top 25, increased her Instagram following to a staggering 1.2 million, and secured her first Vogue photoshoot, which appears in next month’s issue.

But if her body language cues are anything to go by, the success is unlikely to go to her head, with Judi suggesting the teenager displayed great maturity during the match. 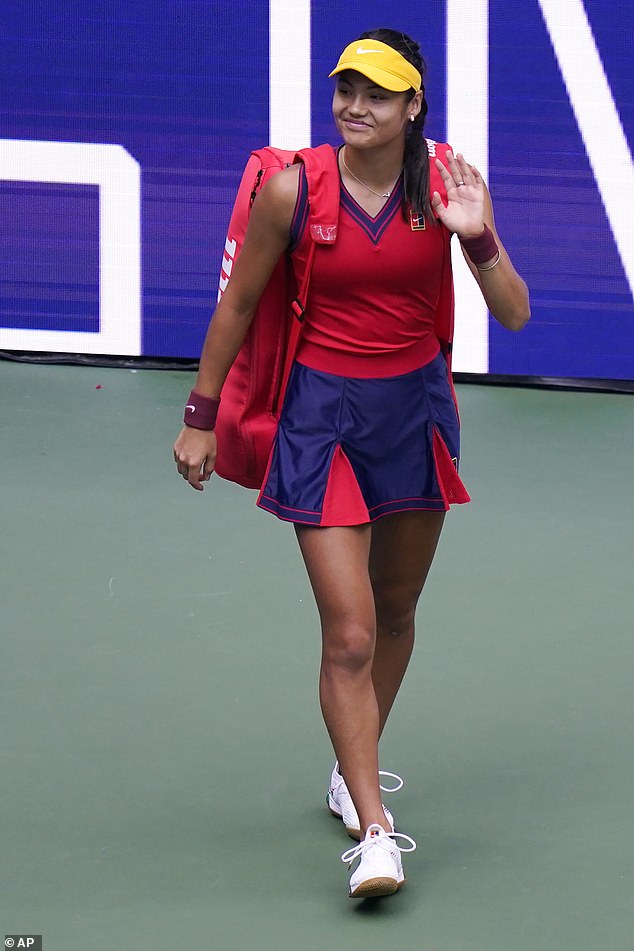 Walking onto the court at the USTA Billie Jean King National Tennis Center yesterday, Judi said Emma appeared ‘modest’ and did not indicate her ‘status’

Walking onto the court at  the USTA Billie Jean King National Tennis Center yesterday, Judi said Emma appeared ‘modest’ and did not indicate her ‘status’.

She pointed to the young athlete’s casual wave to the roaring crowd, saying: ‘Emma arrived using body language signals of modesty, like her low-positioned wave to the crowd, with the hand held below shoulder height, rather than raised in a signal of status.’

Judi said: ‘Players reveal so much about their state of mind and the methods they are using to motivate themselves towards a win and this often means non-verbal signals or rituals of focus like sitting staring during breaks in a bid to visualise or stay ‘in the zone’, or more emotional outbursts or rituals like muscle-clenching or muttering to themselves in anger.

‘They need to be their own coaches out there during a match and Emma should have been especially in need of some dramatic self-supporting behaviours as the crowd were primarily backing her opponent and her family were miles away back in the UK.’ 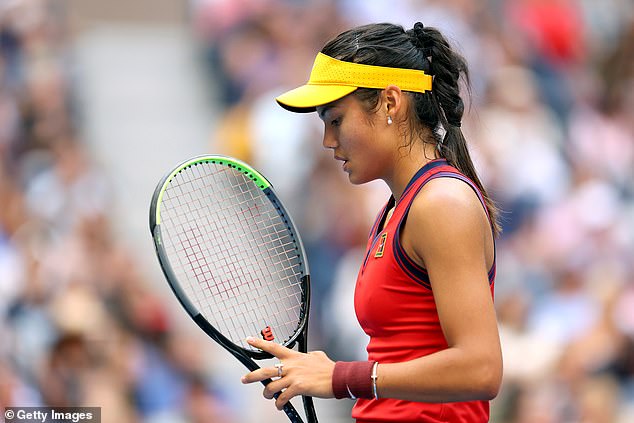 Despite the crowd overwhelming cheering for her opponent, Judi said Emma did not seem to ‘struggle emotionally’

Emma mother and father – Ian and Renee Raducanu from Romania and China respectively – were unable to attend the match due to Covid travel restrictions.

However, despite their absence, Emma showed a remarkable amount amount of self-control, according to Judi, who said: ‘Emma looked so isolated out there in front of a crowd that was very noisily backing her opponent.

‘We saw no obvious glances to her coach to suggest a desire for support though, or any more reflective moments to suggest she was struggling emotionally.’

She added: ‘Instead though we saw a young woman in almost complete command and brimming with self-control.

‘ There was so little in the way of drama from her, even when she won.’ 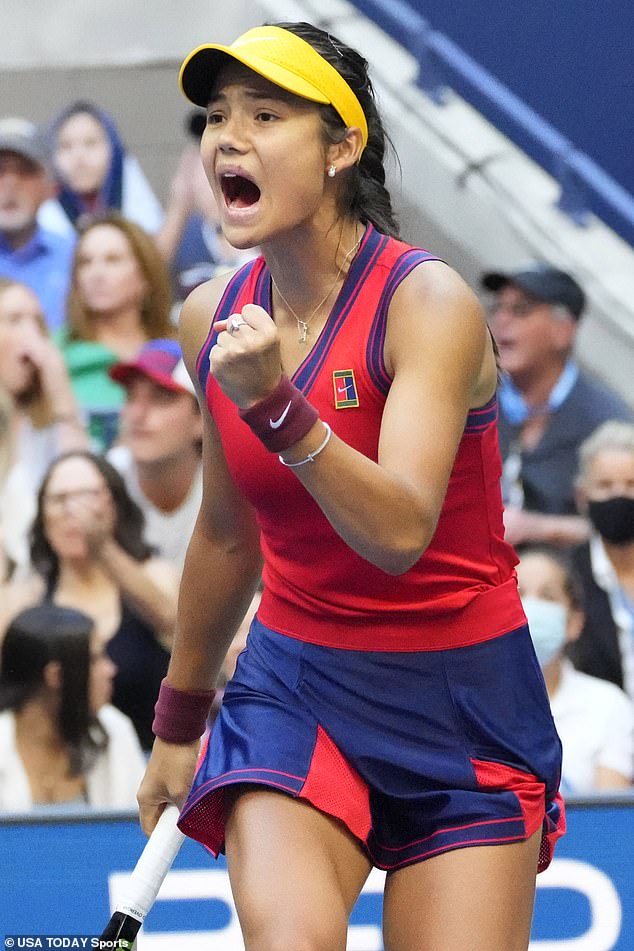 Judi went on to say that Emma’s body language showed her focus, saying: ‘To describe Emma as looking level-headed is an understatement.

‘During the match this sense of calm self-control was visual in her body language too.

‘During breaks her only sign of tension-burning came from the double leg-judder that she hid beneath her large towel, but above the waist she sat nibbling on bananas and even looking around at the crowd as though she was just another punter.

‘She even glanced across at her opponent a couple of times as though she felt she was playing a friendly rather than a Grand Slam title.

‘Top level players rarely look at or even acknowledge one another until the game is over, taking a more ‘gladiatorial’ approach.’

Judi said: ‘Emma will perform a fist-shaking gesture to motivate or to reward herself during a match but the gesture often looks incongruent with the rest of her body pose.

‘The tensing of the hand muscles is rarely accompanied by the normal angry facial expressions that players who see themselves as on-court ‘warriors’ will use.

‘Compared to the tantrums of some of the other, more experienced players, Emma looks more like a head girl calmly winning a school tournament.’

4. CONFIDENT BUT NOT ARROGANT LEADER 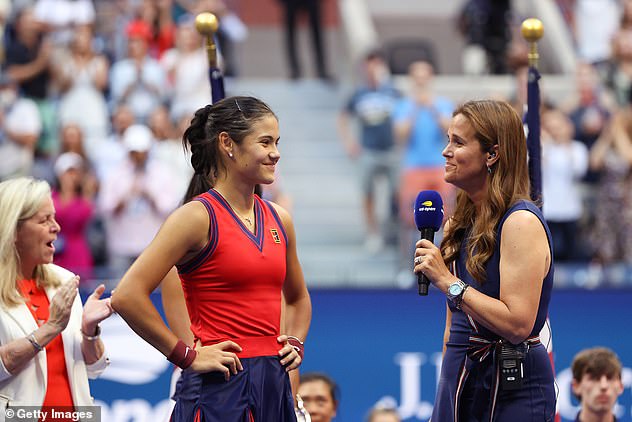 And the teenager also showed a maturity well above her tender years during her post-match interview, with Judi saying she showed ‘no unmanageable excitement’

And the teenager also showed a maturity well beyond her tender years during her post-match interview, with Judi saying she showed ‘no unmanageable excitement.’

Judi revealed: ‘She finished looking like a confident but not arrogant leader, standing during her interview with her hands on her hips and her feet splayed in a ritual of calm confidence and power.

‘Her blink-rate was steady, suggesting no burst of adrenalin to suggest stress or even unmanageable excitement and her eye contact with the interviewer suggest she is not phased by media demands.’

Judi said: ‘There were no pseudo-infantile displays from her, which are those outbreaks of ‘cute’ body language that can follow success, like squealing and tears or self-diminishing rituals, such as legs crossed at the ankles, hands clasped tight and shoulders shrugged, or over-congruent emotional displays, like clutching the head; jumping up and down; throwing the arms about in mock excitement or giggling loudly. 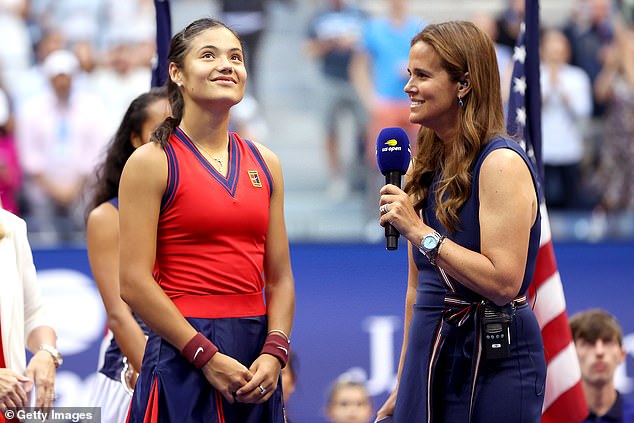 Emma’s calm demeanour continued throughout her post-tournament victory interview, with Judi saying she ‘quietly and calmly took control of this interview that was watched by millions around the world’.

She explained: ‘Her beaming smile involved closed lips and an eye and nose crinkle that suggested, although she was clearly happy, that she was also not over-awed.’

Judi continued: ‘Emma said what she wanted to say in a very polite but firm manner, pausing before her first answer to look around at the crowd as they cheered and then continuing to create her own pauses between each point to hear audience responses each time.’

She was even ‘highly magnanimous’ in victory, making sure she praised her opponent –  19-year-old Canadian Leylah Fernandez – at the beginning of the interview. 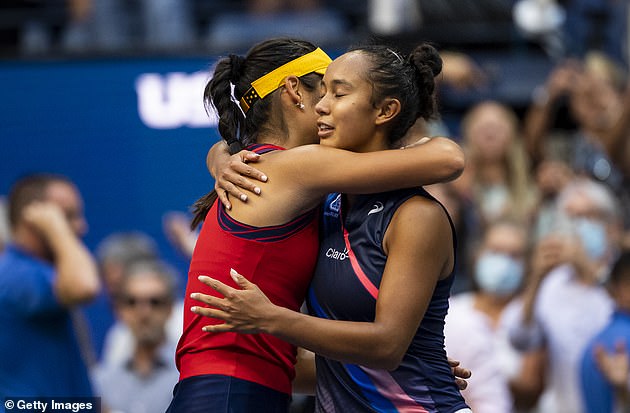 US Open champion Emma Raducanu  was ‘highly magnanimous in victory’, seen her embracing opponent 19-year-old Canadian Leylah Fernandez after beating her in the final

‘Instead of answering the first question about herself she put herself in control of the interview in a way that even mature politicians don’t often manage, saying “first of all…” and deflecting to her opponent by praising her first.

‘Emma self-punctuates, pausing with a mouth-pinch of determination and even when she was asked how she felt that Virginia Wade was rooting for her in the audience she referenced her other iconic supporter Tim Henman as well.’

Judi added that after Emma’s victory, there was ‘a moment on the stage when everyone was cooing over and cheering Leylah and the interviewer was standing right in front of Emma, blocking her from view’.

But, she said, there was ‘no trace of any diva attitude or self-pity from [Emma].’

James Carlton, manager of Bromley Tennis Centre manager – where Emma trained from the ages of 10 to 16 – told Sky News the star was ‘incredibly single-minded and determined’.

He added: ‘She works very hard. The centre is next to her school so she would be here before, after, and sometimes during.

‘We would often see her working on her schoolwork in between sessions.

‘She was here every day and when she was on court you could see she was putting everything into it. Doing that while maintaining her schooling and academia is even more impressive.’