Bodybuilder is branded ‘controlling’ over his ‘rules as a boyfriend’ which include always having phone location turned on, sharing your phone password and a ban on male friends

A bodybuilder and fitness model has caused a debate after posting a video outlining his relationship rules on TikTok.

Jamie Goldie, 22, from Edinburgh, garnered more than 140,000 views on the clip on his TikTok page, titled ‘My rules as a boyfriend’, part of a trend where people outline their demands when it comes to relationships.

Among the rules he wants a potential girlfriend to adhere to are not having male friends, and always keeping their phone location on.

In the video, he says: ‘So here’s my rules as being a boyfriend.

‘Number one, location, it’s on. Location has to be on, either Snap[chat] or Find My Phone. Either or, I’m happy, but you’ve got your location on, not got a choice.’ 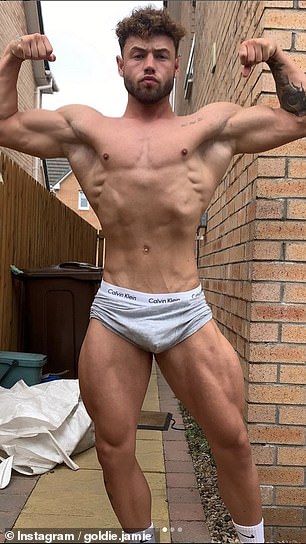 ‘You never know, I might just have to have a look on your phone.

He branded the fourth rule he outlined, which pertained to social media, as ‘another simple one’.

Finally, he tackled the fifth rule, which was about clothing.

‘This is one I actually care about to be honest,’ Jamie said. ‘I mean, girls wear absolutely ridiculous things out but there’s nothing you can do about it….don’t really care, as long as I’m the one there at the end of the day.’

He ended the video by saying: ‘There’s some basic rules for me being a boyfriend.’

Some TikTok commentators agreed with the bodybuilder, and described the rules as ‘acceptable’ and basic respect

The clip, which garnered hundreds of responses with many who perturbed by the rules calling out the poster for being ‘controlling’.

One wrote: ‘The location and friends part hmm too far id tell my daughter to run tad controlling.’

Another added: ‘Absolutely not…. NEXT… He’s all yours ladies!’

And a further TikTok user said: ‘Genuine question, why location on? Do people actually have relationships like that?’

However, others insisted his rules were just ‘basic respect’, with one TikTok user writing: ‘Just me that thinks these are acceptable?’

Another agreed, adding: ‘Sounds like a good set of rules tbf!’

And a third said: ‘Am I the only one that agrees with this 100% a think that’s basic respect. I don’t want my guy having girl pals cos I was the girl best friend to him.’

A number of respondents were more troubled by the rules, with some accusing the bodybuilder of coming across as ‘controlling’