The amount of money Boeing might have to pay families of 737 Max crash victims could depend on one disturbing factor – How long the passengers spent knowing they were plunging to their deaths.

The series of lawsuits that could exceed $1 billion shoot even higher if evidence shows Boeing knew about flaws in the planes before the tragedies happened.

Two flights on the Boeing 737 Max planes crashed within six months of each other,  killing all on board

A Lion Air flight from Jakarta, Indonesia and Depati Amir Airport crashed into the sea 12 minutes after takeoff, claiming 189 lives in October 2018.

And in March, an Ethiopian Airlines flight from Addis Ababa Bole Airport flying to Nairobi, Kenya crashed six minutes after takeoff, killing 157 aboard.

The Ethiopian disaster led to the worldwide grounding of the 737 Max, which accounts for around a third of Boeing’s operating profit.

While the precise causes of the crashes are still being determined, it is believed preliminary evidence is raising the liability risk for Boeing. 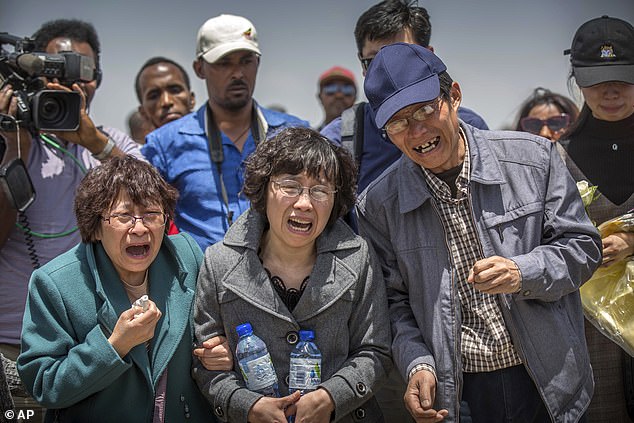 Family members cry at the scene where the Ethiopian Airlines Boeing 737 Max 8 crashed shortly after takeoff, killing all 157 on board, near Bishoftu, south of Addis Ababa, Ethiopia 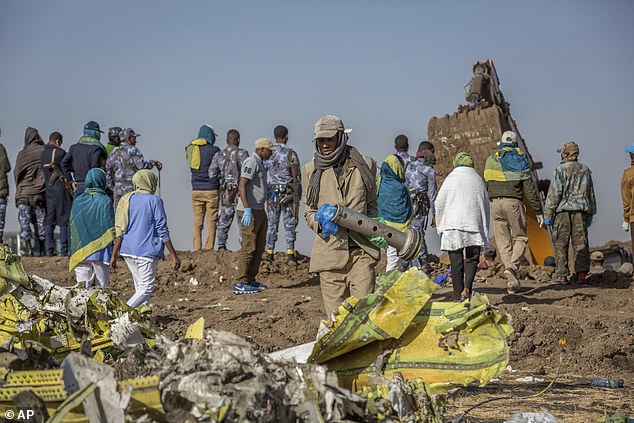 Workers gather at the scene of an Ethiopian Airlines flight crash near Bishoftu, south of Addis Ababa, Ethiopia in March 2019 to collect the wreckage. All 737 Max planes were grounded following the second disaster in six months 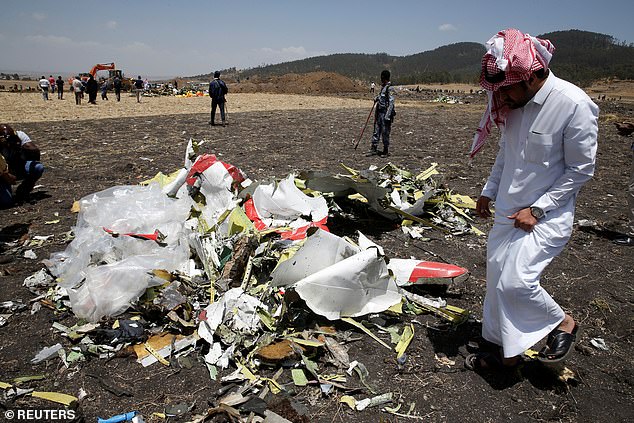 Reports are believed to show the pilots of both aircraft struggled for several minutes to regain control of the diving planes as they reached speeds of almost 600 miles an hour.

The evidence suggests the victims knew their fate, some of the family’s lawyers have argued.

‘The bottom line is Boeing’s exposure is much more substantial than in any other case that I’ve been a part of in my quarter-century of representing families,’ aviation lawyer Brian Alexander told Bloomberg.

The family of Samya Stumo, 24, a health-care analyst killed in the Ethiopian crash, filed a lawsuit against Boeing in Chicago, where the company has their headquarters. 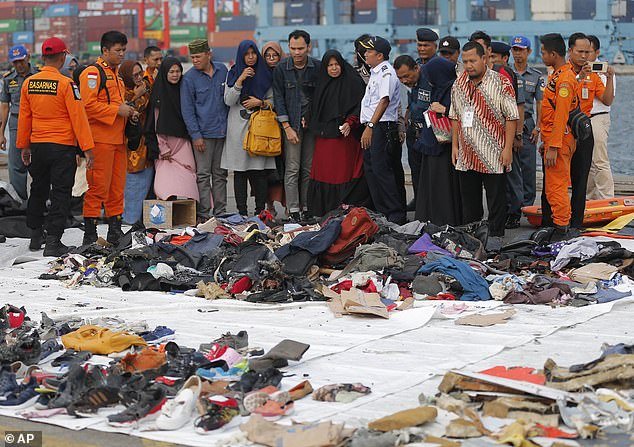 Relatives of passengers of a crashed Lion Air jet check through personal belongings retrieved from the waters where the airplane is believed to have crashed, at Tanjung Priok Port in Jakarta, Indonesia 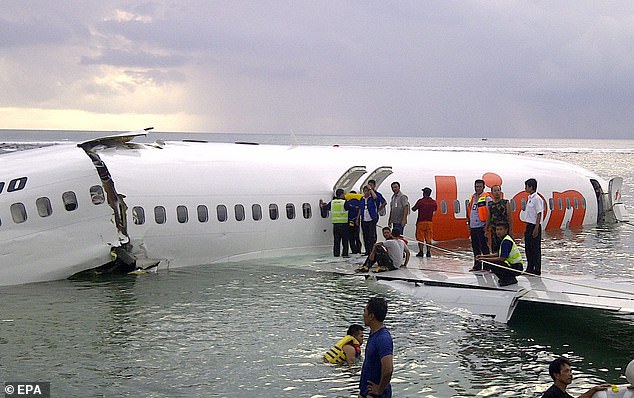 The downed Lion Air Boeing 737 was brought into shore from the Java Sea, having remained significantly more intact than the Ethiopian Airlines flight five months later 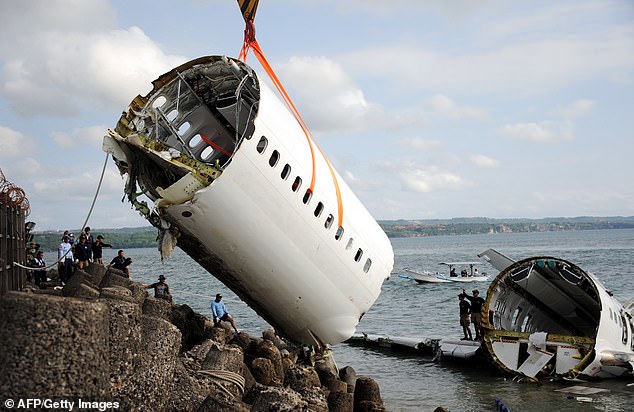 The lawsuit alleges negligence, as well as failure to warn and civil conspiracy.

Another 30 relatives have now taken action against the company on behalf of the deceased.

The measure is only one part of the extremely complex legal fight, in which families could also claim damages for grief, sorrow, loss of companionship and even future paychecks.

It comes as Boeing admitted to knowing about a technical problem with its 737 Max ‘cockpit safety alert’ a year before the two aircrafts crashed. 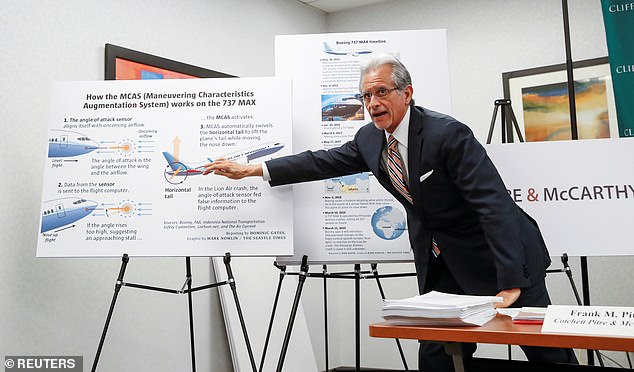 Lawyer Frank M. Pitre from Cotchett, Pitre & McCarthy speaks in relation to a lawsuit regarding the crash of Ethiopian Airlines Flight 302 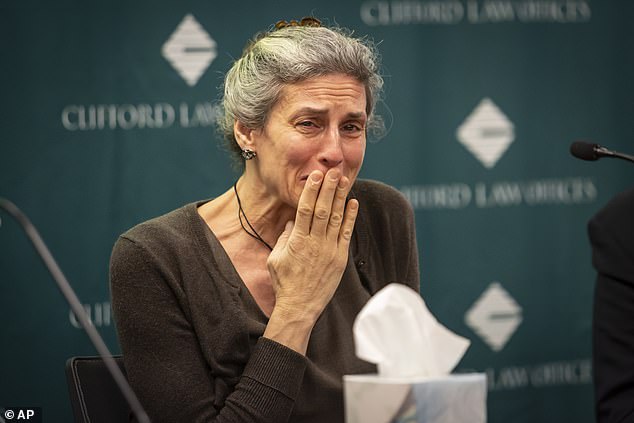 Samya Stumo’s mother Nadia Milleron becomes emotional during a news conference in which the family announced a lawsuit against Boeing. It is believed they were the first American family to take legal action, and are now one of 30 victims relatives who have sued Boeing

The feature was designed to warn pilots when a key sensor might be providing incorrect information about the pitch of the plane’s nose.

But within months of the plane’s debut in 2017 engineers realised that the sensor warning light only worked when airlines also bought a separate, optional feature – but did not disclose the concerns to airlines or safety regulators.

The sensors malfunctioned during the flight in Indonesia.

It is not clear whether having the warning light would have prevented either crash.

A spokesman for the American Federal Aviation Administration (FAA) said the agency was notified of the non-working warning light in November, after a Lion Air 737 Max crashed on October 29.

‘However, Boeing’s timely or earlier communication with (airlines) would have helped to reduce or eliminate possible confusion,’ the spokesman said in a statement.

Nearly 400 Max jets were grounded at airlines worldwide in mid-March after the Ethiopia crash.

It is believed some defendants are offering cash settlements to victims families in exchange for a pledge not to pursue legal claims.

Some families in Indonesia have been approached by Lion Air with an offer of more than 1 billion rupiahs ($90,000), according to plaintiffs’ attorney Brian Kabateck, who provided a copy of the release form. The average annual income in the country is about $3,400.