Shares in Boeing crashed for the second time in two days as $20 billion was wiped off the firm’s value following the Ethiopian plane crash that killed 157 people.

Malaysia, Singapore Australia and and Oman also grounded the plane. The same model was involved in another fatal crash in Indonesia in October.

Boeing’s stock fell 3.2 to $387.10 minutes after the opening bell at the New York Stock Exchange today, adding to a 5 per cent decline on Monday.

Sunday’s disaster has caused alarm in the international aviation industry and wiped billions of dollars off the market value of the world’s biggest planemaker.

Boeing’s stock fell 3.2 to $387.10 minutes after the opening bell at the New York Stock Exchange today 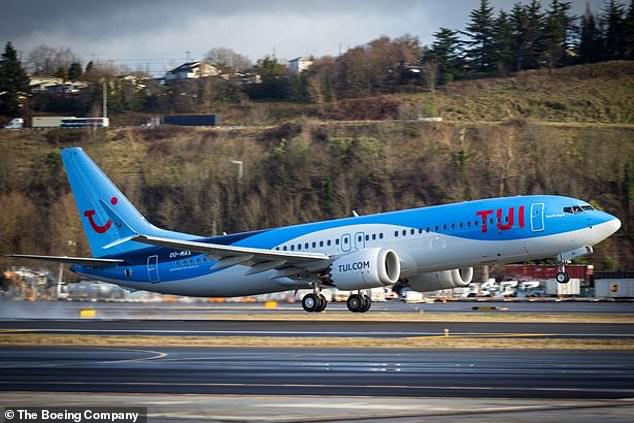 The UK Civil Aviation Authority said in a statement headlined ‘Boeing 737 MAX Aircraft’ that ‘as a precautionary measure’ it had decided ‘to stop any commercial passenger flights from any operator arriving, departing or overflying UK airspace’.

Since the Ethiopia crash, at least seven of the 24 analysts covering the stock have reviewed their ratings, with two downgrades and one price target cut so far, according to Refinitiv data.

DZ Bank became the first brokerage in nearly two years to place a ‘sell’ rating on the stock, while setting a price target of $333 – the lowest on Wall Street.

Brokerage Edward Jones also downgraded the stock to ‘hold’ from ‘buy’, saying the accidents could result in additional expenses, some order delays and pressure financial results.

‘On whether Boeing is responsible in some way or if there is a problem in its aircraft is something investors are still trying to digest,’ said Rick Meckler, partner at Cherry Lane Investments in New Vernon, New Jersey. 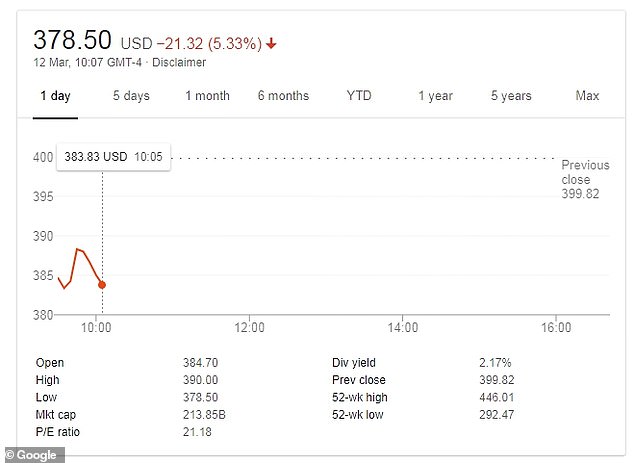 When the New York stock exchange opened at 10.30am local time, Boeing shares dropped for a second day, adding to a 5 per cent decline on Monday 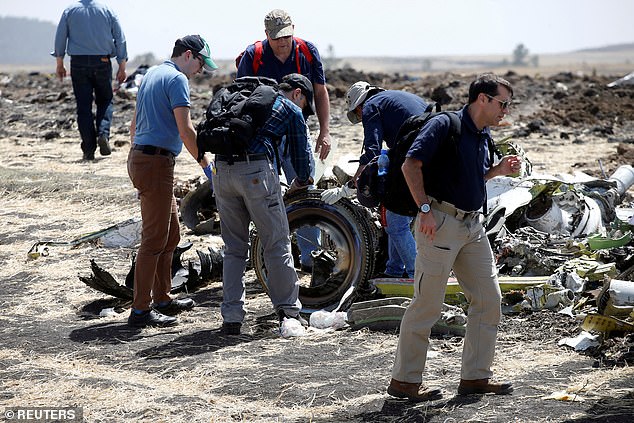 American civil aviation and Boeing investigators search through the debris today at the scene of the Ethiopian Airlines Flight ET 302 plane crash, near the town of Bishoftu

The United States will mandate that Boeing implement design changes by April, but said the plane was airworthy and did not need to be grounded.

Safety experts say it is too early to speculate on what caused Sunday’s crash and black box recorders were yet to yield the cause.

Some experts say it is too early to speculate on the reason for the crash or whether the two are linked. Most crashes are caused by a unique chain of human and technical factors.

Given problems of identification at the charred disaster site, Ethiopia Airlines said it would take at least five days to start handing remains to families.

Identification of the Ethiopian crash’s 157 victims is still being made and black boxes have not yet revealed the cause of the tragedy. 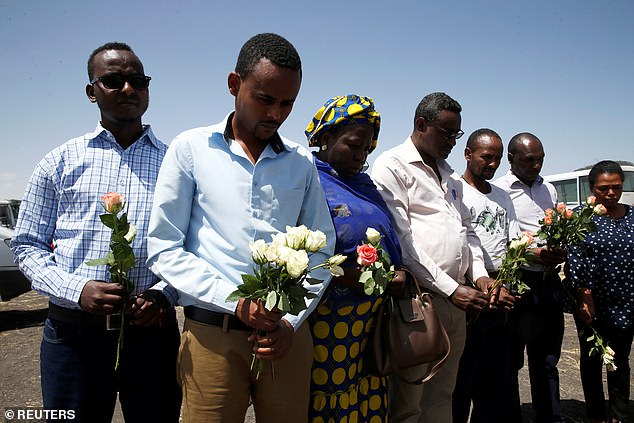 Noordin Mohamed, a 27-year-old Kenyan businessman whose brother and mother died, said: ‘We are Muslim and have to bury our deceased immediately.

‘Losing a brother and mother in the same day and not having their bodies to bury is very painful,’ he said in the Kenyan capital Nairobi where the plane had been due.

Flight ET 302 came down in a field soon after takeoff from Addis Ababa on Sunday, creating a fireball in a crater. It may take weeks or months to identify all the victims, who include a prize-winning author, a soccer official and a team of humanitarian workers.

The United States has said it remained safe to fly the planes, and Boeing has said there is no need to issue new guidance to operators based on the information it has so far.

Ethiopian Airlines has grounded its four other 737 MAX 8 jets as a precaution and aviation authorities in Singapore, Australia, Malaysia and Oman followed China, Indonesia and others to temporarily suspend Boeing 737 MAX aircraft in and out of their airports.