The lone survivor of an alleged mass shooting is responsive and walking around just two days after he fled for his life with a gunshot wound needing emergency surgery.

Ross Tighe witnessed the alleged shooting of his mother and stepfather, Maree and Mervyn Schwarz, and his older brother Graham, at their $10million property in Bogie, inland from Queensland’s Whitsunday region.

Police will allege the young father hid in bushes and ran for his life as gunshots rang out on the extremely remote, 29,000 hectare bush property. 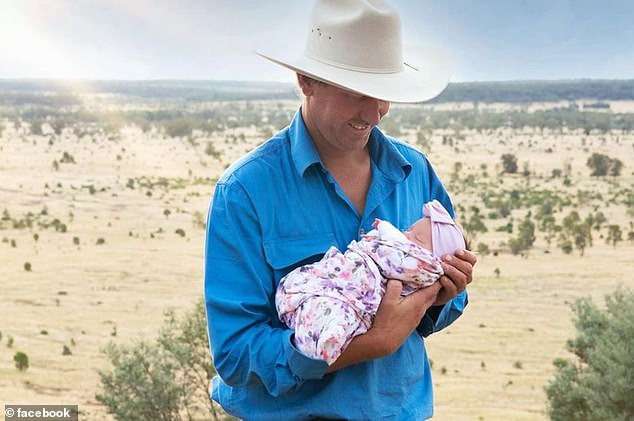 Mr Tighe (pictured) allegedly fled down a winding track to his nearest neighbour, gripping the steering wheel and desperately fighting to remain conscious with a gunshot wound in his abdomen

Neighbour Darryl Young has been charged with three counts of murder and one of attempted murder. Police suspect the alleged incident was sparked by a property dispute regarding boundary lines.

Mr Tighe allegedly fled for his life and was able to drive 40km through unforgiving terrain along a winding gravel track to his nearest neighbour’s property to seek help – all while trying to remain conscious with a gunshot to the abdomen.

He underwent emergency surgery on a Thursday night at Mackay Base Hospital and spent two days in intensive care.

But Mr Austen noted the young dad still has a long way to go to recover from the alleged horrors of the past 72 hours. 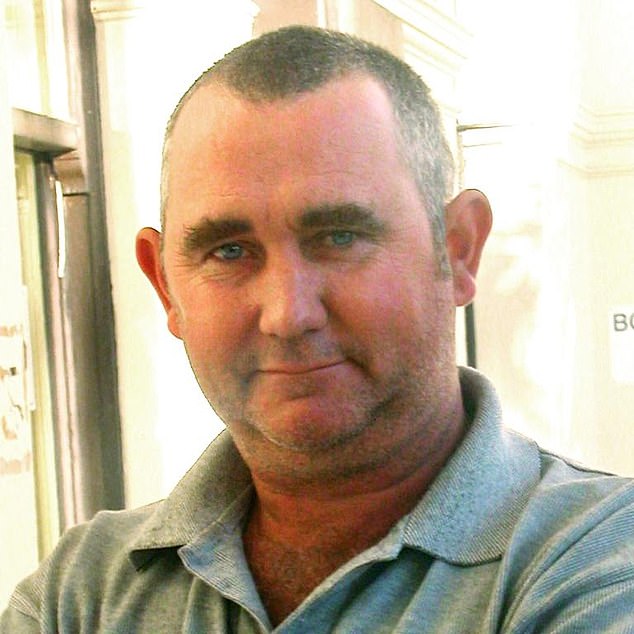 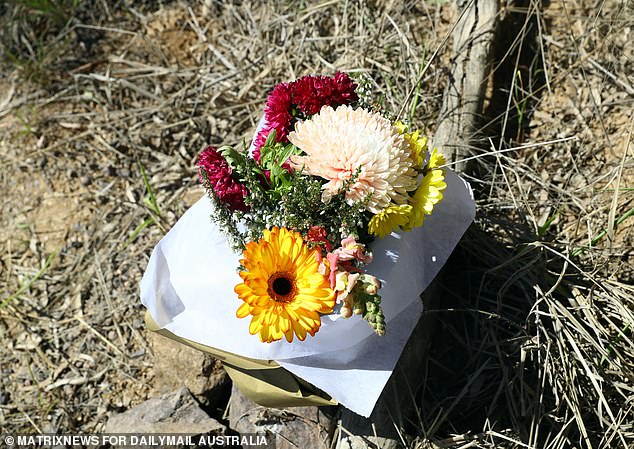 It’s a remarkable recovery for a man who was found in the middle of nowhere with life threatening injuries on Thursday morning.

Police said Mr Tighe was was in a ‘very distressed state’ when he initially spoke to officers, which led to confusion as police tried to narrow down the area where the alleged shooting took place.

He’s understood to have sought out neighbours at the Flagstone cattle farm 40km away. A man at the property said he would not comment on the incident, adding his family were ‘too close’ to those involved. 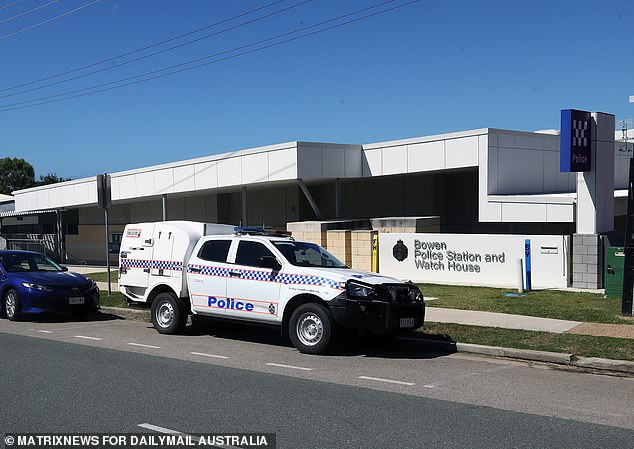 Young, a neighbour to Mr Tighe, has been taken into custody and charged with three counts of murder and a count of attempted murder

The $10million Schwarz estate has gone under the hammer five times in the last 17 years. It’s understood previous owners had also butted heads with Young over the boundary lines but Mr Schwarz did not feel put off by the disputes.

Extended family have made the journey from all over Queensland to be by Mr Tighe’s bedside. It’s understood the wife and children of his late brother Graham were flown via Angel Flight Australia to be there when he woke up.

‘They were getting a bit inundated,’ Mr Austen said, adding his family were hoping for time and space to come to grips with the immense loss. 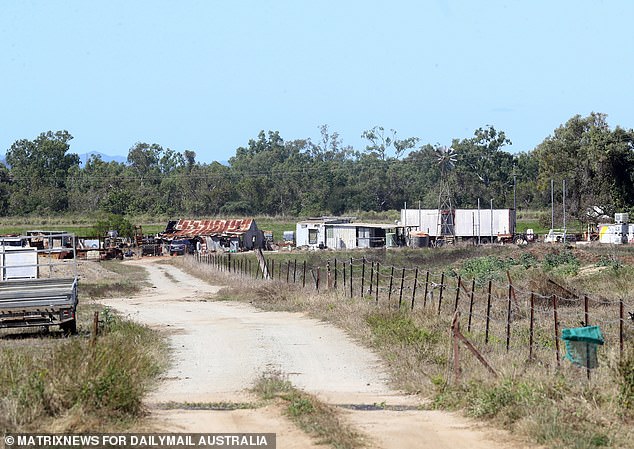 Daily Mail Australia also understands alleged gunman Young was not even living at the 7,700 hectare property at the centre of the dispute.

His primary place of residence was in fact just outside of Bowen – about 2.5 hours from the land in Bogie.

The home – sitting on a far more manageable 65 hectares – is at the back of a quiet dirt track and protected by a fence with a warning sign which reads ‘Admittance by invitation only’.

The sign warns ‘trespass damages’ of at least $10,000 will be applicable ‘upon one step onto this land’. 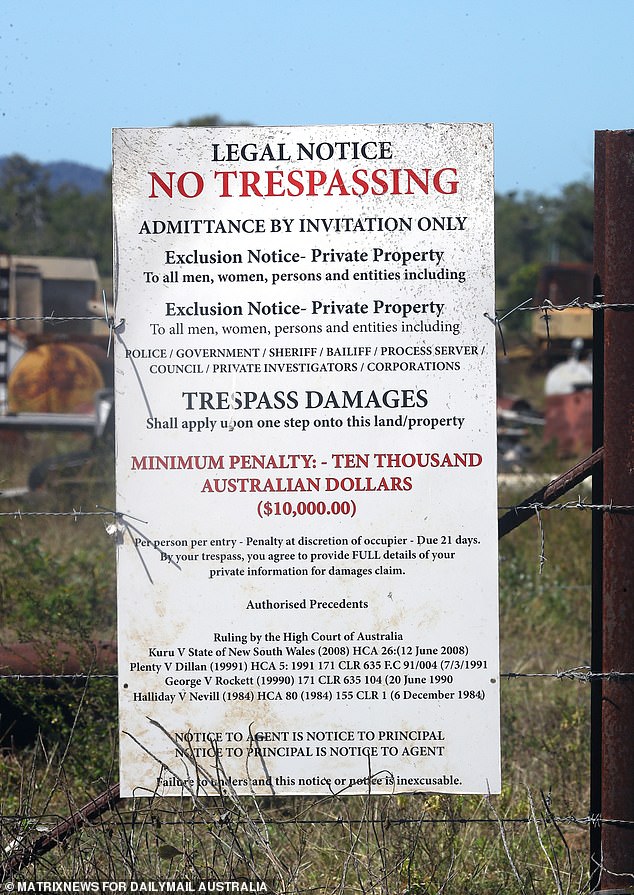 Young’s Bowen property is a secretive one with a large and extensive warning sign posted on its barbed wire fence reading: ‘No Trespassing’

A nearby neighbour told Daily Mail Australia Young often kept to himself and appeared ‘a quiet fellow’.

‘He doesn’t have very many visitors at all,’ the neighbour said, making light of the extensive list of prohibited people according to his legal notice.

The person, who did not want to be identified, said Young had been spending less and less time at his primary residence in favour of his Bogie property.

‘He’s been out there fixing it up a lot lately,’ the neighbour said.

‘Everyone knows everyone out here but we like to all keep to ourselves. I knew him as a pretty quiet, loner type.’

Over the years Young’s place had acquired more and more junk, to the point where it now ‘looks like a junkyard’ from the street, according to neighbours. 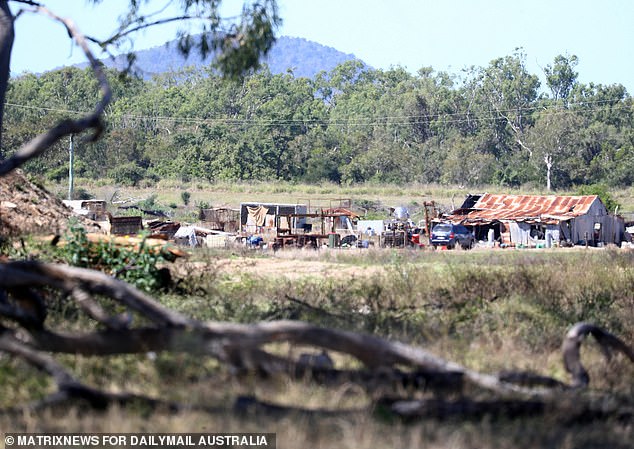 Rusty old cars, farming machinery and random bits and pieces are littered across the front portion of the property and line the driveway to the tin shed at the back. His home is tucked around a corner, further out of the way of the main road.

Mackay Detective Inspector Tom Armitt revealed Young was taken into custody alongside four other people several hours after they were first alerted to the alleged shooting.

‘It took a period of time for us to make contact with him,’ Det Insp Armitt said.

Meanwhile townspeople are mourning the loss of the Schwarz family, and their son Graham.

One Collinsville store owner told Daily Mail Australia they were a friendly family who always went out of their way for the community.

‘They were genuine people and they’ll be missed. What a tragedy,’ she said.