A treasure-trove of rare photographs from New York City’s 1960s counter-culture scene taken by legendary snapper, Fred W. McDarrah, have been released by the Museum of the City of New York.

From AIDS demonstrations to Pride Parades, poetry readings and the Stonewall Riots, McDarrah both reflected and defined the tumultuous era transforming the independent weekly paper into a national institution as its only photographer and photo editor for almost 50 years.

McDarrah was one of the first people to ever photograph Bob Dylan in 1962 while he was performing with Karen Dalton at the Greenwich Village bohemian hangout known as the Bitter End Club.

Three years later, in 1965, the Minnesota transplant had by then achieved some critical success when McDarrah captured him sitting outside Sheridan Square Park in stove pipe jeans and a black turtleneck, with his tangled hair. His photo of the Bard saluting the camera has become an iconic image worldwide, and McDarrah is credited with being the one who helped launch his career.

This image of Bob Dylan sitting outside Sheridan Square Park in 1965 is one of Fred McDarrah’s best known photographs. McDarrah is credited for recognizing Dylan’s talent early on and launching his career after snapping him in 1962 while performing the harmonica at a Greenwich Village bohemian hangout known as the Bitter End Club 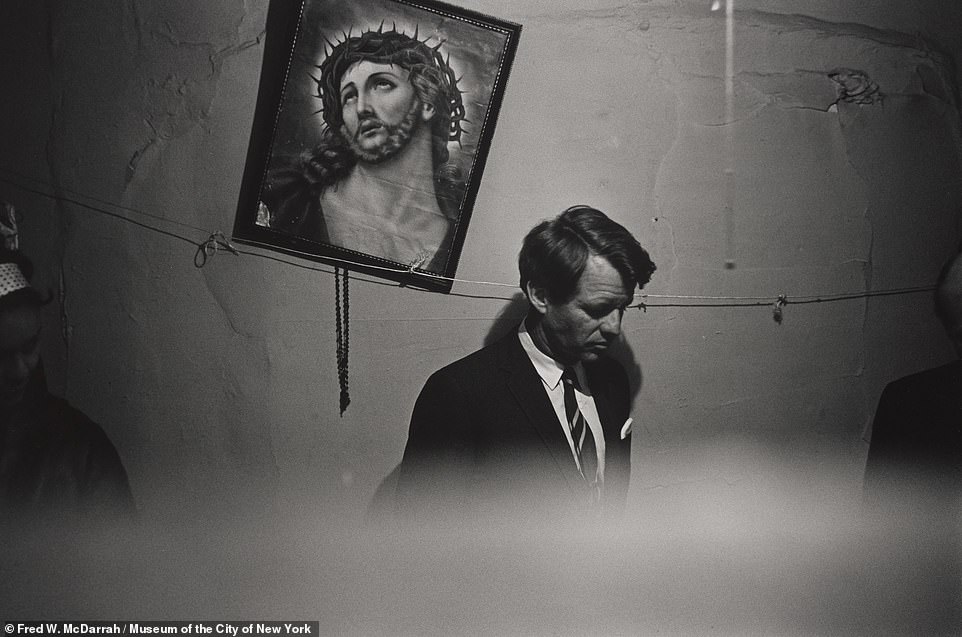 McDarrah snapped this photo of Senator Robert F. Kennedy who was touring a slum in the Lower East Side in May 1967.  The poignant image ran on the front page of the Village Voice after the presidential hopeful was assassinated on the campaign trail in June 1968 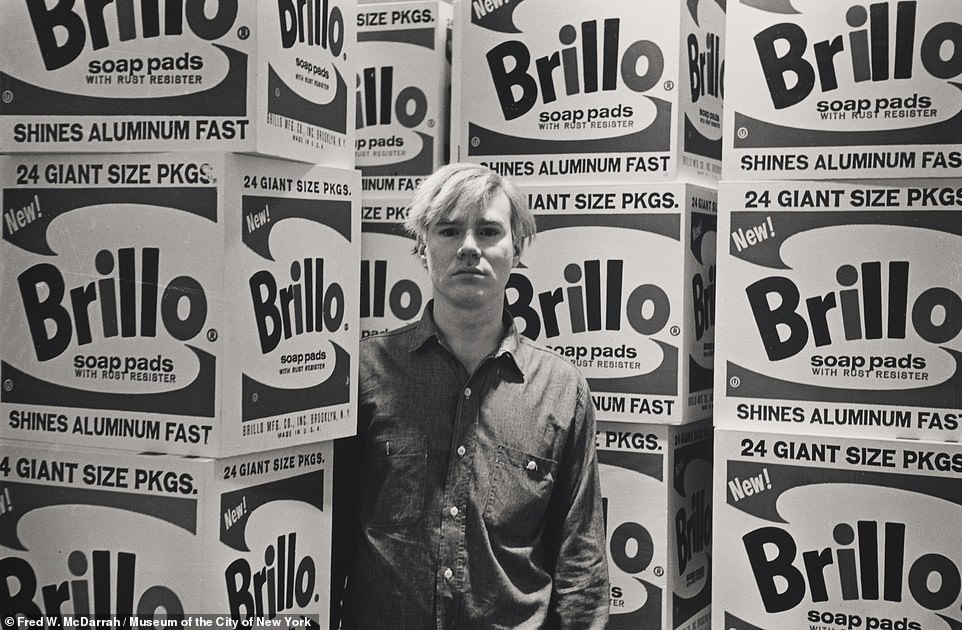 Andy Warhol at opening of ‘The Personality of the Artist’ at Stable Gallery in 1964. McDarrah was able to forge a relationship with many famous artists of the era after he was invited to join an informal get-together of various artists known as ‘The Club; Some of The Club’s members were: Robert Rauschenberg, Willem de Kooning, Lee Krasner, Jasper Johns, Alex Katz and Roy Lichtenstein. ‘Often, he would have his camera and unobtrusively document the world of artists he had become a part of,’ explained the Steven Kashner Gallery who represents McDarrah’s work

‘Fred saw the artists who helped define the time—Jack Kerouac and Bob Dylan— poets scratching lyrics and stories out of the New York air,’ wrote Pulitzer Prize winning cultural critic, Hilton Als in the forward for a book of McDarrah’s images titled Pride: Photographs after Stonewall.

McDarrah’s incessant coverage of the bongo drum playing bohemians proved to be auspicious – by the late 1950s he opened a side-business as a ‘Beatnik broker’ throughout catered affairs in New York City.  He got the idea after a suburban housewife from Scarsdale, called his office to ask if he knew where she could ‘hire’ a beatnik as entertainment for her next dinner party.

McDarrah charged $15 for a 30-minute poetry session with one beatnik, but $200 would buy the client a trio of performing Beats for an entire night. McDarrah took a small commission and left the rest to his money-strapped artist friends. 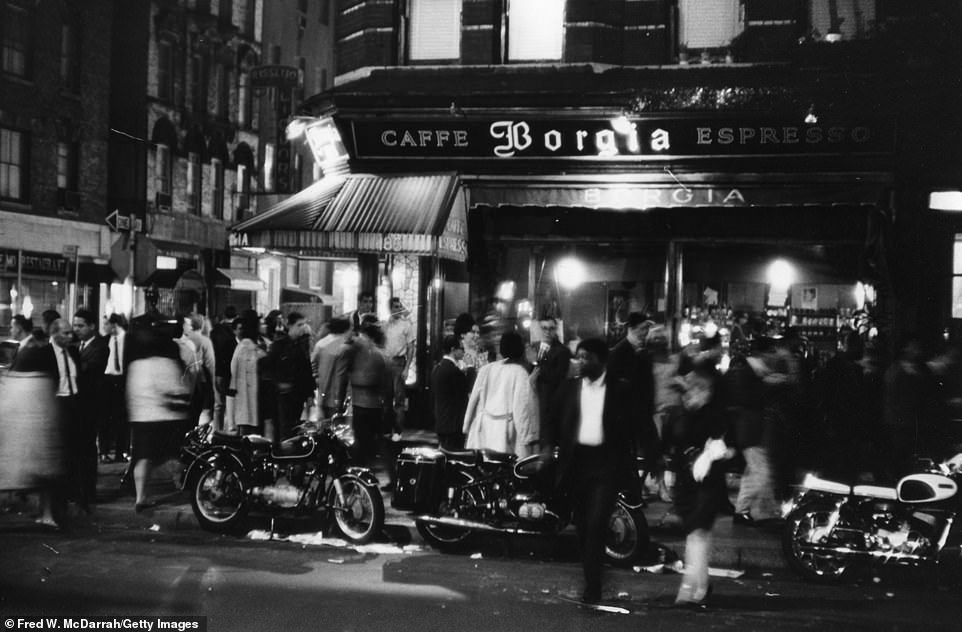 McDarrah captures the lively scene outside Cafe Borgia in 1966. The Greenwich Village institution was a favorite haunt for bohemians and beatniks. By the 1950s, espresso and coffee houses became a symbol of the beatnik counterculture 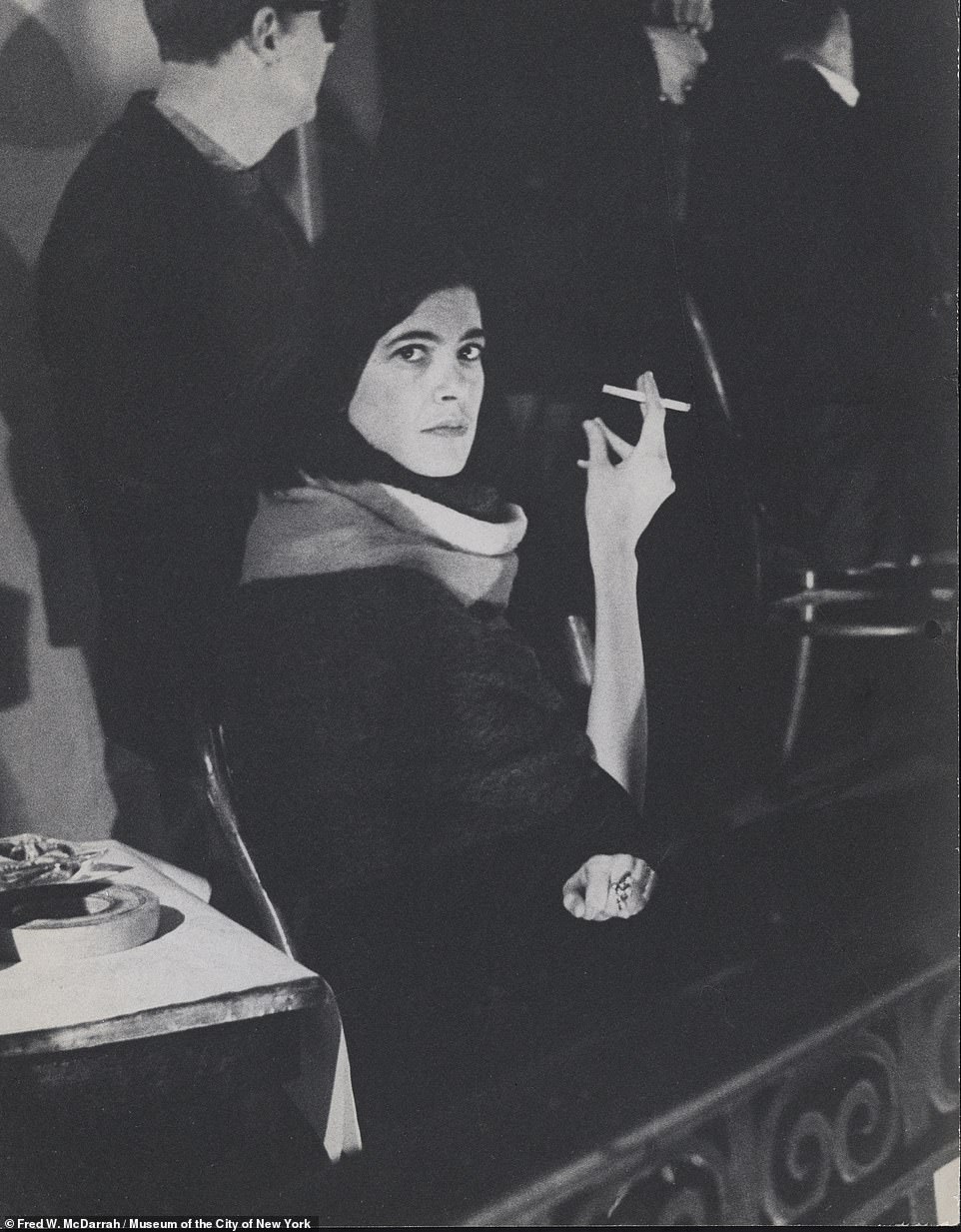 Susan Sontag in the Atrium of the Mills Hotel for a Symposium on Sex on December 2, 1962. Susan Sontag is one of the most influential female intellectuals of the 1960s as a writer, filmmaker, philosopher, teacher, and political activist

Another generation-defining photo taken by McDarrah is that of New York Senator Bobby Kennedy who was touring a slum in the Lower East Side during in May 1967. After the presidential hopeful was assassinated on the campaign trail in June 1968; the Voice ran the evocative photograph on the front page which depicts Kennedy in the shadow of an image of Christ in a crown of thorns.

Fred William McDarrah was born in Brooklyn in 1926 and purchased his first camera for 39 cents at the 1939 World’s Fair. Though he did not begin taking photography seriously until he was stationed in Japan as an Army paratrooper during World War II. After returning back to the States, McDarrah received his degree in journalism in 1954 from New York University under the G.I. Bill.

Though his work has been displayed in many exhibitions and collected into numerous coffee table books, McDarrah, along with critics, always considered himself a photojournalist rather than an artist. ‘If somebody called me a fine arts photographer I’d laugh them out of the room,’ he told The East Hampton Star in 1999.

Though, more than just an observer, McDarrah was at the heart of everything that happened in New York City during its postwar bohemian splendor.

‘He shot jazz clubs and coffeehouses; concerts and poetry readings; sit-ins, be-ins, love-ins and teach-ins. He captured famous faces, like Norman Mailer and William S. Burroughs; now-vanished places…and historic moments, like the Stonewall uprising in 1969,’ wrote the New York Times in his 2007 obituary.

Over the course of his long career at the Village Voice, McDarrah was also responsible for launching the career of other seminal photographers: Sylvia Plachy and James Hamilton, with his influence palpable in their deft documentation of the artists, politicians, freaks, buildings and institutions that define New York City.

McDarrah is also responsible for mentoring the young career of Hilton Als, who succeeded him in retirement as the Photo Editor for Village Voice. ‘That I was ever his ‘boss’ is a ridiculous notion. No one is ever the boss of history, the living history you want to learn from,’ said Als, who went on to become a Pulitzer Prize winning writer for The New Yorker after leaving the Voice.

He continues: ‘This would have been in the early 1980s, when I was barely a self, but anxious to join all those bodies, glitter, voices, agents of change that Fred, an agent of change himself, recorded with nothing less than love and respect, the same love and respect many of us had for Fred who, lifting his camera, saw the person before he saw anything else.’

Herein are just a sample of the photos snapped by the indefatigable visual chronicler that are currently on view at the Museum of the City of New York until December 1.

Warhol Superstar and transsexual icon, Candy Darling poses on the David Susskind television show in December 1970. Pulitzer Prize winning cultural critic and former assistant to McDarrah – Hilton Als said: ‘His portrait of Candy Darling, the trans performer, is one of the greatest comments we have no only on transformation but on stillness- a moment of reflection during an era when stillness was not the point but change was’ 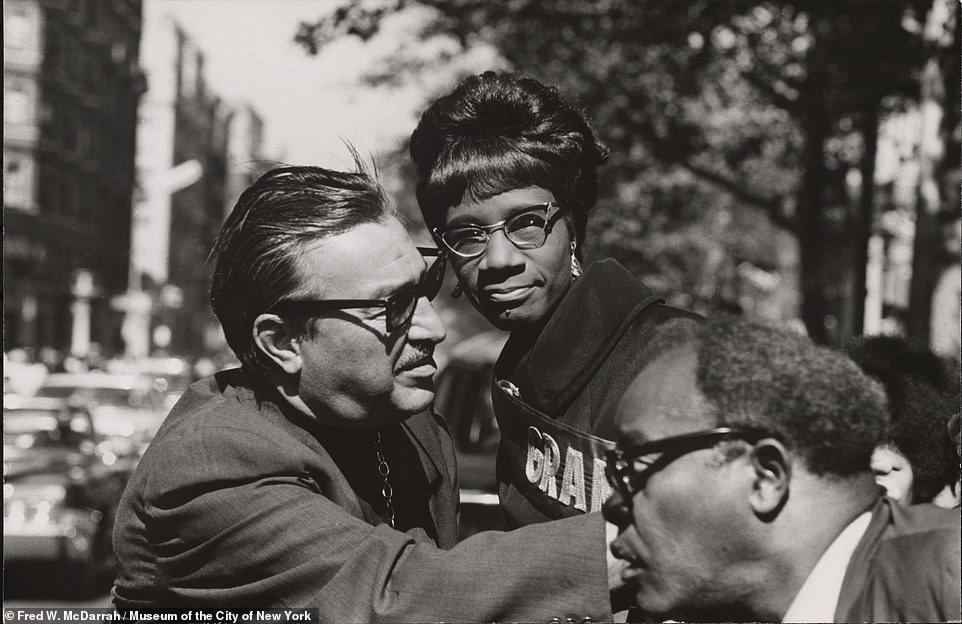 Shirley Chisholm, also known as ‘Fighting Shirley’ poses next to Adam Clayton Powell Jr (left) on September 21, 1969. Chisholm was the first African American woman to be elected to Congress, serving seven consecutive before she became the first black woman to seek the presidential nomination in 1972.  Powell Jr was the first African-American man elected to New York City Council in 1941 and  then later served 12 terms as a Congressman for New York in 1945 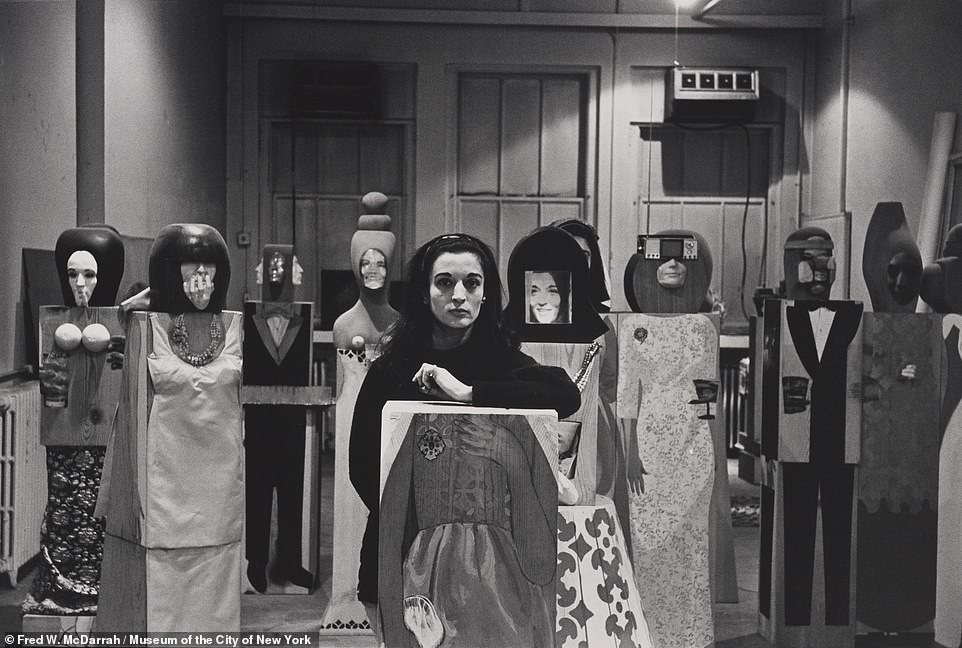 Artist Marisol Escobar poses among her 15 wooden sculptures on the eve of her one-woman exhibition that was titled ‘The Cocktail Party’ on April 14, 1966