Murillo added that while in Bolivia, said the drug kingpin’s son took up piloting classes at a school in Santa Cruz de la Sierra, the country’s commercial center.

Iván Archivaldo Guzmán, the son of Joaquín ‘El Chapo’ Guzmán, received access to Bolivia’s parliament building in 2015 while he was there to take up aircraft pilot classes 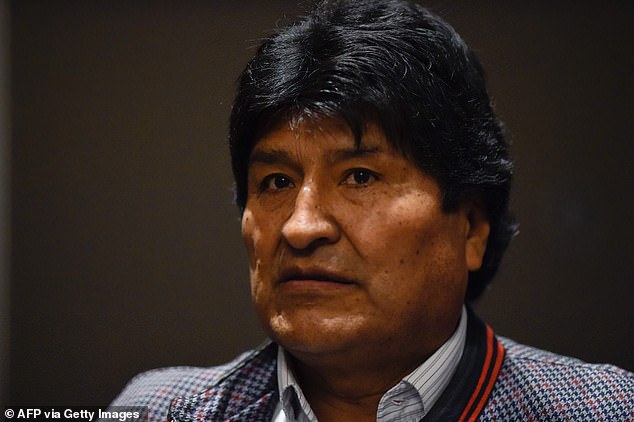 ‘The other day we found credentials of the Plurinational Legislative Assembly on behalf of the son of El Chapo Guzmán,’ Murillo said.

‘Credentials are provisional permits to enter the Assembly. The son of El Chapo Guzmán was in Santa Cruz, came to study piloting, then disappeared.’

Murillo said that drug trafficking organizations from Mexico and Brazil have been operating an illicit business that generates between $1 billion to $1.5 billion a year in Chepare, a city in central Bolivia where Morales was raised.

The Interim Minister, who said he will not stop the pursuit of Morales until he sees him land in a jail cell for the rest of his life for his purported role in directing orders from Mexico, added that the government received 15 extradition requests from its Brazilian neighbor that went unattended.

After Morales left for asylum in Mexico, his own supporters took to the streets in protest.

Officials say at least 32 people have died in demonstrations since the October presidential election. 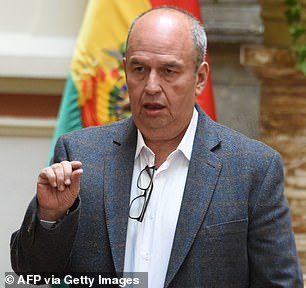 An agreement late Friday on elections between Morales´ party and the interim government helped pacify the country. Street blockades were lifted, allowing supplies to reach marketplaces Saturday in areas that had been short of groceries and gas.

On Friday, the interim government accused Morales of terrorism and sedition for purportedly organizing highway blockades intended to prevent food from reaching some cities.

Acting Interior Minister Arturo Murillo said the complaint relates to a video in which Morales is supposedly heard in a phone call coordinating the blockades from Mexico. Murillo said Bolivia´s government is seeking a maximum penalty, which is between 15 and 20 years in prison.

Morales has said the video is a “montage” by his opponents.

Guzmán Salazar, who is in his mid-30s, was included in the United States Department of Justice’s January 2015 indictment against 117 people who formed part of the Sinaloa Cartel, which his dad co-founded with Ismael ‘El Mayo’ Zambada-Garcia.

Guzmán Salazar was charged with trafficking huge quantities of methamphetamine, cocaine, heroin and marijuana to points around the United States.

He was in charge of a war-like assault on Mexican forces, who promptly released his brother, Ovidio Guzmán López.