A neighbourhood in north west England is managing to get through the coronavirus crisis thanks to the kind heart and clever planning of a young family doing their bit to supply the vulnerable.

Three young boys and their parents have helped more than 50 isolated and vulnerable neighbours needing food or a friend during the lockdown period in the Breightmet area of Bolton, Greater Manchester.

Mother Angela Barry, 32, a church administrator, was keen to help her elderly neighbours after thinking about how her grandfather, who died last year, might have struggled to cope during lockdown. Mobilising her sons Joshua (nine) Ben (seven) and Isaac (four) an idea was hatched.

The Barry family have now become famous in their community for setting up a free vegetable stall, delivering essentials to vulnerable residents, and offering to connect with those quarantining alone.

(Left to right) Joshua Barry, 9, Isaac Barry, 4, and Ben Barry, 7, of Bolton, Greater Manchester, have set up a free fruit and veg stall to help the elderly in their local community 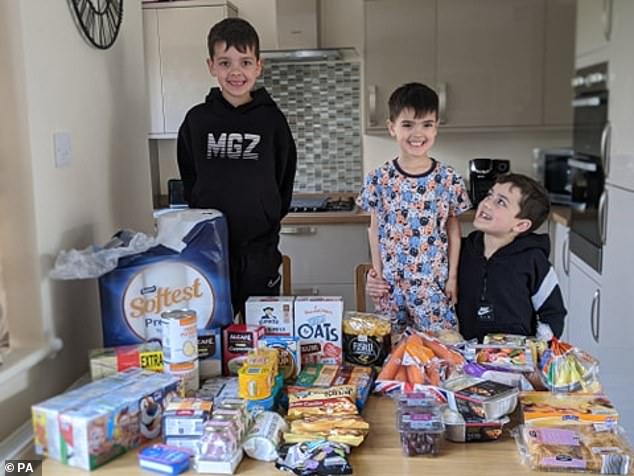 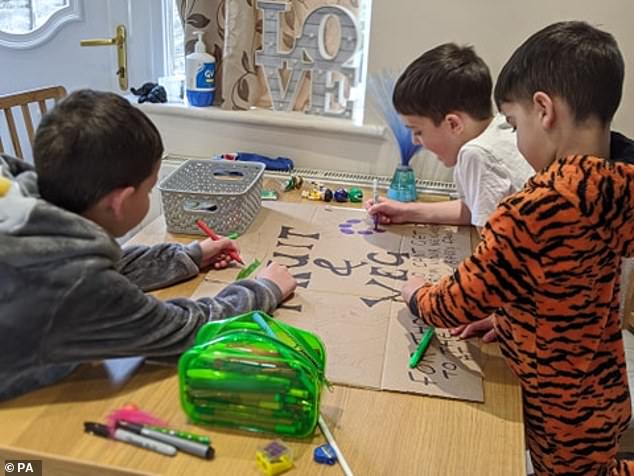 After their parents stocked up with fruit and veg, the brothers set about making signs for their stall and now ‘get very excited whenever somebody comes to take an item’

Mrs Barry said their endeavour began when she ordered extra boxes of vegetables from their local market for neighbours and her sons couldn’t wait to set up a stall in their front garden, for those in the community to come and take what they need.

Her husband Martin Barry, 33, a wood machinist, has also been helping after he was furloughed.

Mrs Barry said their children, who have been working on the stall for two weeks, ‘absolutely love it’.

‘They get dead excited every time someone takes anything from the stall,’ she said.

‘They’re getting to know so many people in the area, and everyone recognises them. They think they are famous.’

‘They also like it because we are remembering (my) grandad by looking after the elderly people in our area,’ she added. 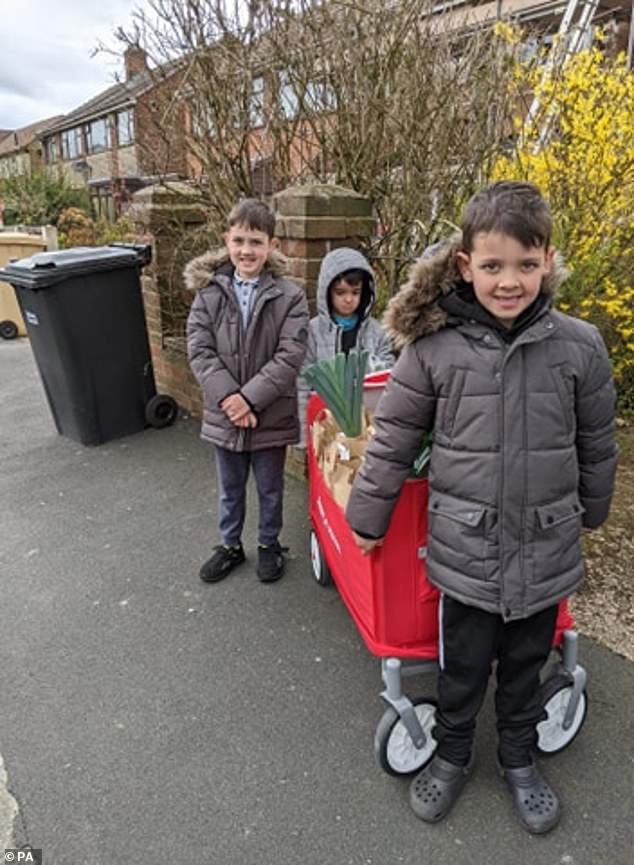 The young brothers, of the Breightmet area of Bolton, help parents Angela and Martin with the produce and have become well recognised for their good deeds

‘Their (great) grandad was always helping people and we’re doing this in his memory too.’

Mrs Barry said they have also been delivering essential food and Easter eggs to vulnerable people, and to those still waiting on hampers from the Government.

The family also set up a system encouraging neighbours to display coloured cards in their windows to indicate if they would like assistance.

Mrs Barry said one neighbour had no internet access and had not spoken with anyone in more than two weeks until her sons reached out to them.

She said: ‘It’s just so needed at the moment, there’s a lot of people who have always needed support and help, but what’s happening now is meaning that people who wouldn’t usually need any help, are doing.

‘We need to rely on each other more than we ever have done before.’

‘It’s been great, the people on our street have been very grateful,’ she added.

‘Some people have lived here for 40 years and they have never experienced anything like this. 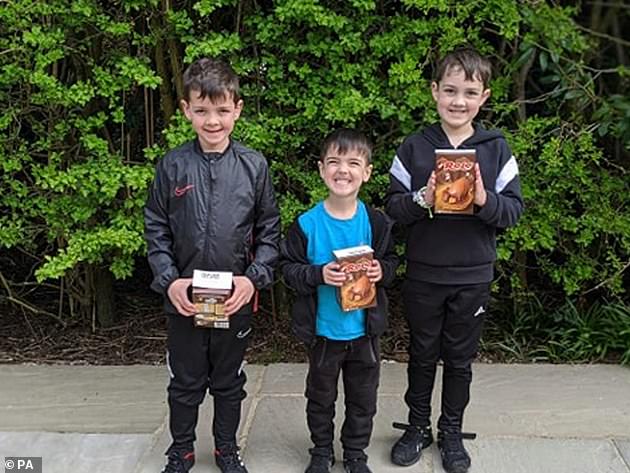 The Barry brother pictured holding their Easter eggs on Easter Sunday, before getting ‘back to work’ on the fruit and veg stall helping out those in need

‘We are talking about having a street party when it’s all over.

‘Once this time has passed, we will be continuing to work to make our community stronger and to look out for those who are isolated.’

Breightmet Morrisons has donated spare food to the family’s efforts, but they have funded most of the deliveries themselves.

As their mission to help their neighbours has ‘snowballed’, Mrs Barry set up a fundraiser so they can keep it up throughout lockdown.