A father has blocked a bin lorry in the street in a 30-minute standoff after being told his recycling could not be emptied because it had an empty Pot Noddle tub.

Robert Watts, 44, claimed when his wife Linzie, 29, offered to remove it, bin men still refused as the rubbish would now be ‘contaminated’.

The father of two from Bolton, Lancashire, was furious when refuse collectors would not empty his family’s recycling that had not been cleared for weeks.

He demanded to know their details so he could put an official complaint in to the council.

But when they refused, he parked his Hyundai in the street so the wagon could not leave.

Robert Watts, 44, from Bolton, Lancashire, claimed when his wife Linzie, 29, (pictured with children Jacob and Amelia) offered to remove it, bin men still refused as the rubbish would now be ‘contaminated’

Mr Watts said: ‘He would not show me his ID so I drove around before they left the street. I then asked him again for his ID and he said ”back up or I’m calling the police”.

‘After 30 minutes he finally shown me his ID but very quickly, I caught it on camera as I had my phone ready.’

Mr Watts said his main issue with the confrontation was the way his wife, who he runs a coffee shop with, was spoken to.

He said: ‘Our bins are usually collected bi-weekly but they changed it to monthly which is understandable. 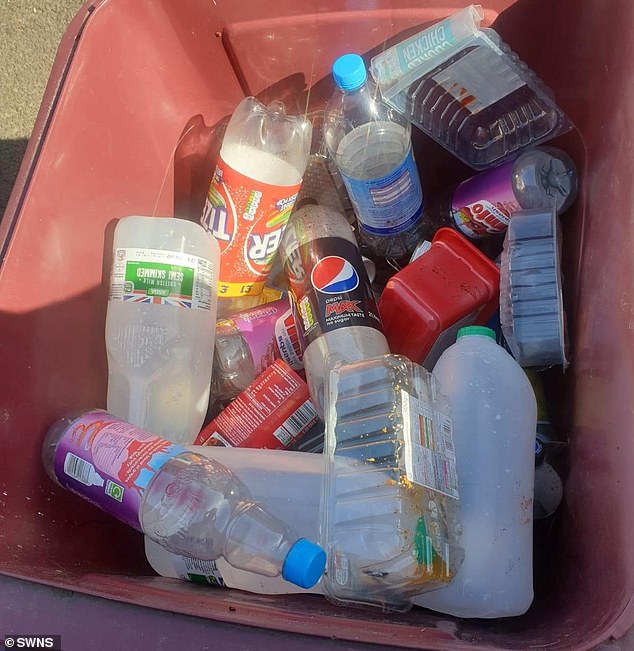 The father of two from Bolton, Lancashire, was furious when refuse collectors refused to empty his family’s recycling bin that had not been cleared for weeks

‘The council have closed off all the public bins to also make the workload lighter. They missed half the bins in the street and when Linzie asked him why, he opened it and said it was contaminated.

‘He pointed to a pot noodle and half an egg shell that fell in. No glass at all. When she said she didn’t understand, he said ”read my lips”.

‘He was not two metres away either when he did this. It was the wrong thing to do really, but I was annoyed.’

Mr Watts, who has lived in the street for four years, said neighbours poured into the road to see what was causing the commotion. 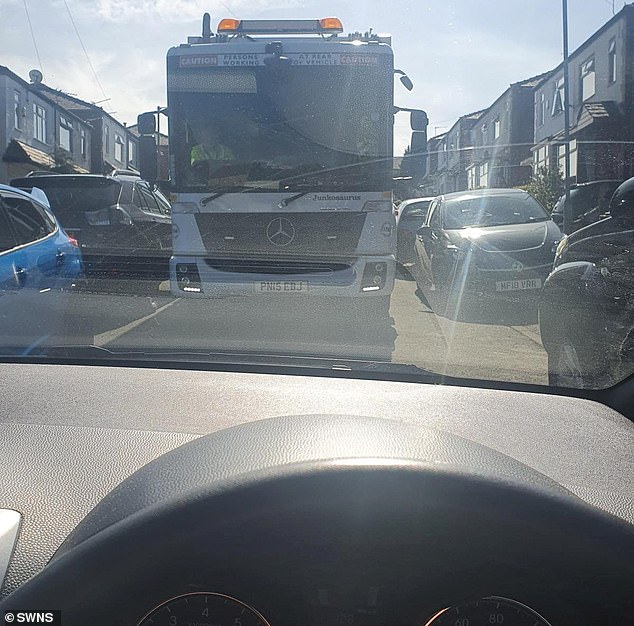 When the bin men refused to tell him their details, he parked his Hyundai in the street so the wagon could not leave (pictured)

And he said he was concerned they might get the impression his bin was dangerous as they were told it had been contaminated.

He added: ‘Are they scared it has got coronavirus in it or something because I could hear the bin men saying it was contaminated?

‘With what’s going on, you say the word ”contaminated” and you think ”Oh my God”.’

After the incident on Tuesday, another collection lorry returned to the street on Wednesday and emptied the couple’s bin.

But Mr Watts, who lives with Linzie, son Jacob, seven, and daughter Amelia, two, called for bin men to be more tolerant if people put the wrong rubbish in a container. 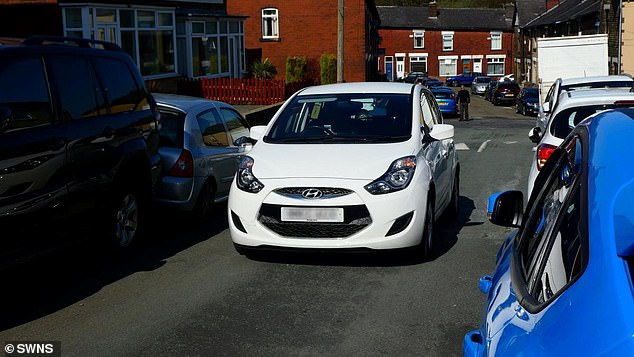 Mr Watts (pictured, his car), who lives with Linzie, son Jacob, seven, and daughter Amelia, two, called for bin men to be more tolerant if people put the wrong rubbish in the wrong container

He added: ‘I have Googled it and it says a Pot Noodle is a completely recyclable item, but they wouldn’t accept it. I don’t actually like them, that what’s annoying as well – it’s my kids that eat them.’

A council spokesman said: ‘This was an unfortunate incident which our crew were subjected to – and it was not because of one Pot Noodle container.

‘Mr Watts’s burgundy bin actually contained lots of items that shouldn’t have been in there – plastic pots, tubs, trays, a pane of window glass and food waste.

‘A crew member explained to Mr Watts why we could not empty the bin.

‘He also offered that if the resident removed the non-recyclable waste and brought the bin back to them, they would empty it as they would be in the street for a while.

‘Later in the afternoon the resident pulled up in his car, blocking the bin wagon from going down the street. The crew were left with no option but to contact the police to resolve the issue.

‘The vast majority of our residents recycle correctly and we understand it is frustrating when bins cannot be emptied.

‘However, every load of waste that is contaminated costs council taxpayers and this resident’s actions delayed other bins from being emptied.

‘This is unacceptable, particularly at a time when our bin crews are working incredibly hard in very challenging circumstances.’