A teacher allegedly told a ginger pupil to dye her hair because ‘orange is not a natural colour’.

Paris Lane, 12, attends Kearsley Academy, near Bolton, Greater Manchester, and was allegedly told to change her hair colour during a uniform crackdown labelled excessive by some parents.

Her furious mother, Nic, 31, has now complained about the comment.

Paris from Farnworth, Lancashire, says she had been walking down a corridor near to the maths department when a teacher made the comment.

She said: ‘I was walking around school and heard somebody say “oi”, I turned around and said “me?” I didn’t really see him.

‘He went “you need to dye your hair back”, he said “orange isn’t a natural colour”. I left and walked off.’

Mrs Lane said: ‘I had actually bought her a brown hair dye because she’s getting bullied. 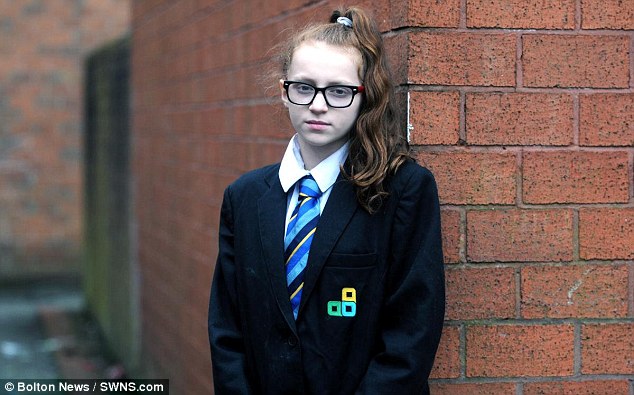 Paris attends Kearsley Academy, near Bolton, Greater Manchester, and was allegedly told to change her hair colour during a uniform crackdown labelled excessive by some parents

‘She was already upset. She’s emotional anyway as she’s gets called all these ginger names.’

Paris added: ‘They should concentrate on our learning rather than what we look like.’

On the school’s website under the uniform policy, it says: ‘No extreme hair colours/ styles (the decision as to what is extreme rests with the principal).’

Mrs Lane rang the school after Paris told her what happened and a member of staff called her back to discuss the hair issue, the school’s new policy about wearing formal-style shoes and a number of problems Paris had been having.

She said: ‘I told (the staff member) about Paris’ hair and she giggled and said, “that’s nothing to worry about, we know ginger is her natural colour”, but it’s not funny to someone who’s already conscious of their hair colour.’

Mrs Lane then had a face-to-face meeting with a teacher about her complaints and about Paris being told to dye her hair.

Plain black shoes (no trainers, no boots. For the avoidance of doubt shoes must be of a polishable material)

Mrs Lane said: ‘He said “I will write that down. Can I speak to Paris about this?” I gave him permission and he’s still not spoken to her.

‘Nothing ever seems to get done. Before I used to get a letter home explaining what action had been taken.

Mrs Lane says she has now sent her complaints, including the teacher’s comments about Paris’ hair, to Ofsted.

A spokesman for Kearsley Academy said: ‘It is our policy not to comment about any individual student at our academy.

‘We always aim to develop a positive relationship with all parents and encourage those who have any specific concerns to speak with the academy.’

An Ofsted spokesman said: ‘While we do not comment on individual schools, we consider all complaints thoroughly.

‘Any complaints received about a school are reviewed and when appropriate assessed to see if any actions are required.’