A man has been arrested and a suspected explosive device seized from a vacant New Zealand property.

Police were called to the empty Newcastle Street property in Phillipstown, a suburb in Christchurch, at about 3.15pm on Tuesday.

Specialist officers were seen entering the cleared lot shortly afterwards, before seizing a suspicious package and ammunition from the rear.

A 33-year-old man was also arrested and is assisting police with their enquiries.

‘Police have located a package containing a suspected explosive device and ammunition at a vacant address on Newcastle Street in Christchurch,’ superintendent John Price said at the time.

Surrounding streets were cordoned off, numerous nearby houses evacuated and a no-fly zone declared in the area.

The bomb disposal unit was on hand and a person, who drove past the scene, counted almost two dozen police cars, according to NZ Herald.

An ambulance was also waiting on standby at the site.

Residents were allowed to return to their properties at around 6pm after the cordon in the area was lifted.

One local who was evacuated said officers did not give an explanation to the sudden evacuation.

‘Members of the community are asked to continue to report any concerning behaviour or activity in their neighbourhoods as we all work together to ensure the safety of our community,’ superintendent Price said. 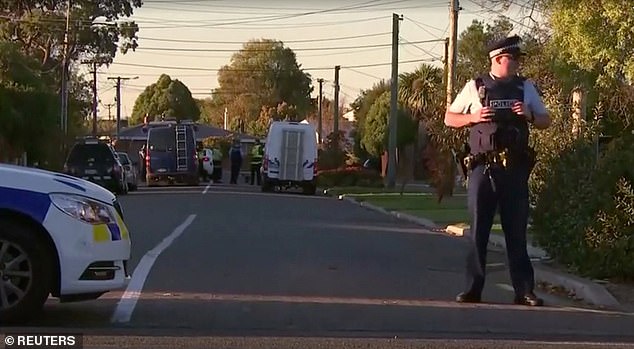 Officers were called to the empty Newcastle Street property in Phillipstown at about 3.15pm on Tuesday