Little Jack Flower smiled with his dad and grabbed a happy snap as Scott Pendlebury was named the Anzac Day medallist.

‘They are booing him!’ Jack, 12, exclaimed as smiles turned to stunned disbelief.

‘They’re booing him’: Jack Flower (right) poses for a photo with his dad Gavan just as Scott Pendlebury walked up to collect his medal. The 12-year old could not believe his ears when the champion was booed by a feral Essendon crowd 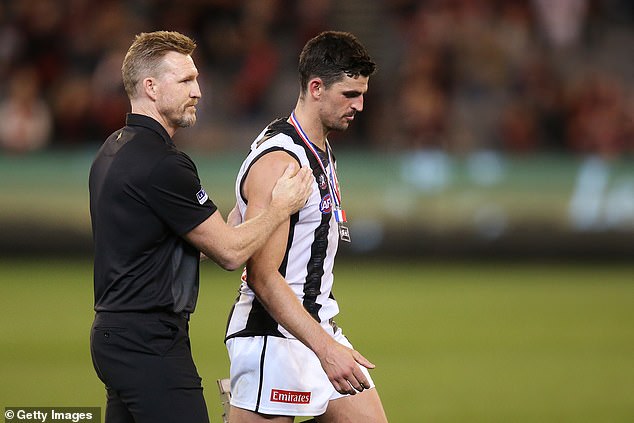 Collingwood coach Nathan Buckley consoles his captain Scott Pendlebury after he was booed on being awarded the best on ground medal. Buckley told Bombers fans they should be ashamed of themselves

Bombers fans in the MCC members shook their heads.

As a 44-year old Collingwood supporter since birth, I’ve seen some shocking moments in AFL footy history, but this one was just mind boggling.

When Pendlebury walked up to collect his medal, the yobos in black and red should have clapped him – or at worst kept their mouths shut.

They clearly forgot or didn’t much care for the supposed Anzac spirit the game is meant to be played under.

If they’d bothered to watch anything other than footy replays that morning, they may have seen an old digger recount his respect for the German nurses and doctors who saved his life while he was a prisoner of war.

The Anzac game is supposed to make us remember about what our armed forces go through and the respect and dignity they have for their opponents, even in war.

But if fans can’t hold onto a shred of decency on Anzac Day, well, I weep for the future.

As a kid watching the Pies at Victoria Park in the 80s and 90s, there is no doubt I booed many a champion player. 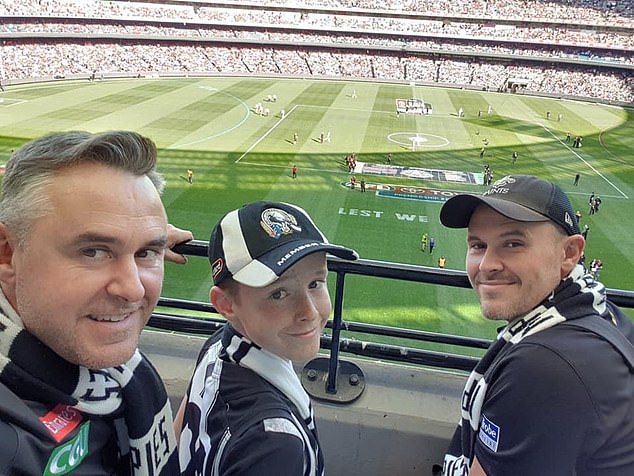 Daily Mail Australia reporter Wayne Flower (right) with his nephew Jack (centre) and brother Gavan (left) at the Anzac Day. We look happy, but we were stunned about what was going on around us

But they were usually the likes of the Bulldogs’ Doug Hawkins or Carlton’s David Rhys Jones – and they’d almost always done something dirty to warrant the abuse.

I was at Vic Park when Saints legend Nicky Winwar raised his shirt and pointed to the colour of his skin amid a sea of boos from rabid Collingwood fans.

It was a disgrace.

One, I like many, didn’t truly appreciate at the time.

While Pendlebury was visibly shocked by the boos, he’ll no doubt dust it off as just another day on the field.

There’s been a lot of controversy about booing in AFL matches in recent years.

Scott Pendlebury hadn’t put a foot wrong. He hadn’t said or done anything other than play good footy.

He had been a deserving winner of the best on ground medal in perhaps the best Anzac Day game since 1995.

Sure, the umpiring in yesterday’s blockbuster match between the Bombers and Magpies had been dodgy.

At one point the game simply stopped while players waited for an umpiring adjudication that just didn’t arrive.

The ferals in red sashes obviously felt their team had been robbed in the closing minutes of the game.

I’m no PC warrior, that’s for sure, and I rolled my eyes when the teams ran out onto the ground and ran underneath the banner instead of straight through it.

I don’t care what the reason was for it. To me it seemed like the players were scared of being injured by tape and paper cuts. Real Anzac spirit there. 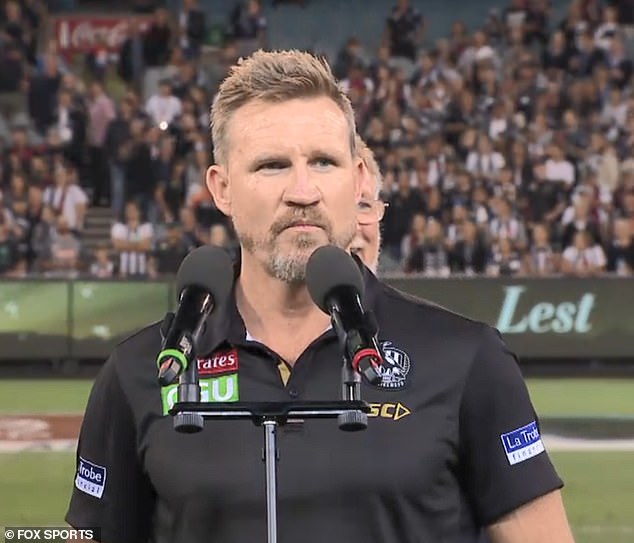 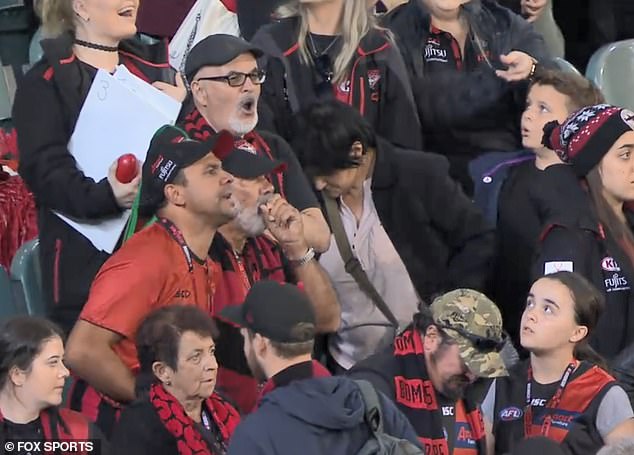 Footy has never been a gentleman’s sport in the outer. It’s not tennis. It’s always been a bit feral – unless you live in Sydney and support the Swans or the Giants of course.

Just the other night the cretins at Melbourne Storm booed Cooper Cronk – the same playmaker, who helped guide Storm to seven grand finals and two premierships.

AFL fans have traditionally had a healthy respect for brilliance.

Collingwood coach Nathan Buckley probably summed it up best as the sound of the boos subsided.

‘Shame on anyone that booed a champion,’ he said.

For a bloke who was booed himself throughout his career for being a champion, he was more than qualified to make the statement. 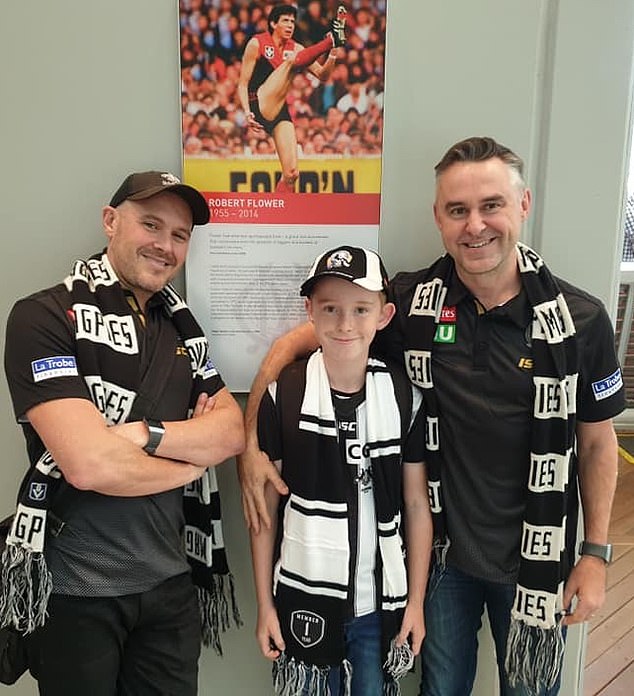 Proud history: Reporter Wayne Flower, nephew Jack and brother Gavan outside the Robert Flower Bar in the MCC Members. Jack was mortified at the sound of boos from the crowd directed at Collingwood captain Scott Pendlebury 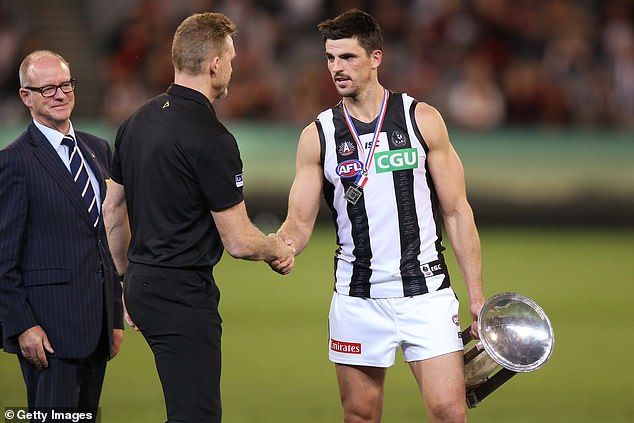 Collingwood coach Nathan Buckley congratulates his skipper Scott Pendlebury after the Pies defeated the Bombers in yesterday’s Anzac Day clash. Pendlebury was visibly shaken by the response to his awarding of the best on field medal

The honest and innocent disbelief from a 12 year old boy at the booing of Pendlebury offers signs of hope that things are going to get better.

In the post match press conference, Buckley was asked about his comment, which he said ‘speaks for itself’.

The post-match display tarnished a day when the spirit of Anzac Day was otherwise respected, with the moving pre-game military ceremony, in which the Last Post, the Ode of Remembrance and the minute’s silence were scrupulously observed.

Many fans took to social media to praise Buckley for his stance and to shame the crowd for their behaviour.

‘Well said Bucks. Brilliant. Standing up for a champion, showing respect for the honour to play in the Anzac match and most importantly our Anzacs,’ one fan wrote. 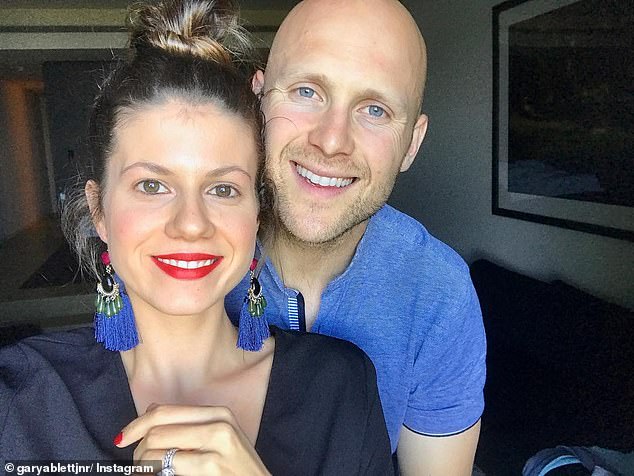 Geelong superstar Gary Ablett (pictured with wife Jordan) was subjected to relentless booing on Monday after he ‘liked’ a controversial post by Israel Folau, which prompted many to go online in defense of the playmaker

‘You all should sit back and reflect you not only disrespected yourselves but if you realise what that medal is for you just disrespected the Anzacs,’ another wrote.

Collingwood president and media identity Eddie McGuire also chimed in after the match.

However, McGuire also said such behaviour needs to be strongly discouraged.

The jeers came as the Geelong legend put on a vintage display against Hawthorn at the Melbourne Cricket Ground on Monday.

Much of the 66,000-strong crowd booed Ablett for the entire game, getting louder when the dual Brownlow Medallist kicked each of his three goals.

Ablett, who welcomed his first child with wife Jordan earlier this year, is open about his Christian faith.

The AFL’s sensitivity over booing of champions stems from 2013 when Sydney Swans great Adam Goodes was booed at most games throughout his farewell year. 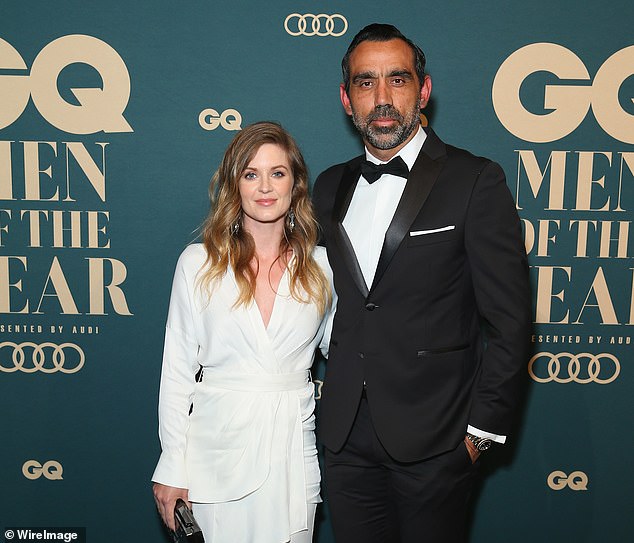 In 2013 Adam Goodes, AFL’s greatest Indigenous player, was also relentlessly booed after he made a stand when a fan hurled racist comments at him during a game

Many attributed that booing to simple racism, while others said it stemmed from an incident earlier in the year when he pointed out a young female fan as having racially abused him during a game by calling him an ‘ape’.

Critics said he went over the top in his condemnation of a young girl who claimed no racial animus in her comments, and the booing campaign began.

Whatever the motivation, the booing became a blight on the game and many commentators said the AFL had not done enough to stamp it out.

‘To come to the boundary line and hear a 13-year-old girl call me an “ape”, and it’s not the first time on a footy field that I’ve been referred to as a “monkey” or an “ape”, it was shattering,’ Goodes told the ABC.

Goodes forgave the young girl after she called him up to apologise, and went on social media to urge other fans to also forgive her.