A feud has broken out between landscapers and an angry group of Bondi residents who want petrol leaf blowers banned during lockdown for being too noisy.

Locals from Bondi Beach have lead the charge for the ban on petrol-powered leaf blowers in favour of electric powered alternatives, leaving landscapers and gardeners fuming.

Residents of the beach-side suburb claimed the increase of dust and noise has had an extreme impact in the locked-down area.

But hardworking labourers like John Hayes, who has serviced the yards of the ritzy area for over a decade, says the ban would send his business costs soaring.

The owner of The Bondi Gardener and Handyman laughed off the noise concerns over traditional leaf blowers and instead highlighted the economic costs of switching to  electric-powered alternatives.

‘Because they haven’t got the grunt, you spend hours getting debris out of difficult places to clean it up – so your labour cost would go through the roof.’

Voicing his outrage at the notion to ban the two-stroke leaf blowers Mr Hayes reassured he had no issues with his hearing, despite decades of exposure to loud-operating machinery like jackhammers.

‘It’s a plethora of stupidity … I’m just shaking my head at it.’ He told the news outlet. 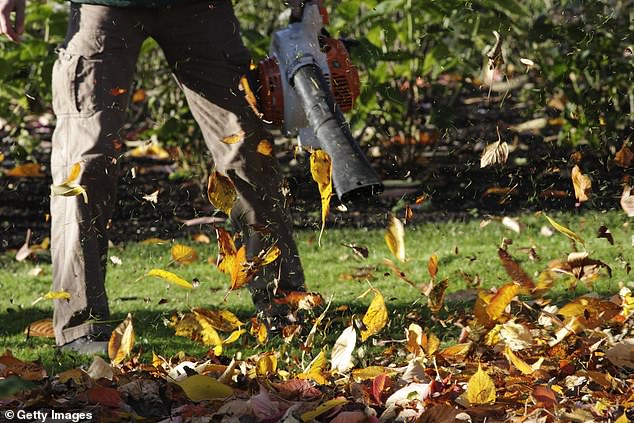 The notice of motion outlined the psychological and health impacts the petrol-powered leaf blowers inflicted upon the Bondi community, claiming the gas-guzzlers noise levels reached ‘hundreds of times above the World Health Organisation Australia maximums’.

The co-convener of the Precinct Margaret Merten told the Daily Telegraph that Sydney’s lockdown was the catalyst for the ban.

‘With lockdown the impact of the noise and dust has really become a lot more extreme for people in the Bondi area,’ Merten said.

‘Bondi is a densely populated area (with) a lot of people living in blocks of units. Their only access to fresh air is opening windows – (with leaf blowers) you’ve got a lot of noise and a lot of dust with not a huge amount of open space for that to be dispersed without it landing in people’s homes.’ She told the news outlet.

Waverley Council workers use a combination of petrol and electric leaf blowers, with 32 petrol-powered blowers being currently used.