More than 4,000 people have put their names down on the waitlist at one Bondi pub, so desperate are Australians to get a taste of pre-COVID-19 normality.

Like many of its counterparts across Australia, The Corner House Hotel had to put its staff on jobkeeper and ask for a rent reduction, with its business ended by the strict lockdown.

But after NSW Premier Gladys Berejiklian announced a slight lifting of restrictions at cafes, restaurants and pubs from 12am Friday, the hotel’s owner Ben Siderowitz had an idea to get people back in the door.

At the cost of $100-a-head, 10 friends could book out the entire pub to themselves and in return get a $1000 bar tab, a private bartender and unlimited woodfire pizza.

The first three slots for Friday, Saturday and Sunday were gone in just seven minutes, while a further eight slots – including some weekday sessions – went within hours.

A group of 10 incredibly eager Irish friends snapped up the first of the extra slots and began sipping on schooners on Friday at midday.

A group of 10 incredibly eager Irish mates paid $1000 to have The Corner House Hotel in Bondi to themselves on Friday, after COVID-19 restrictions were eased in New South Wales 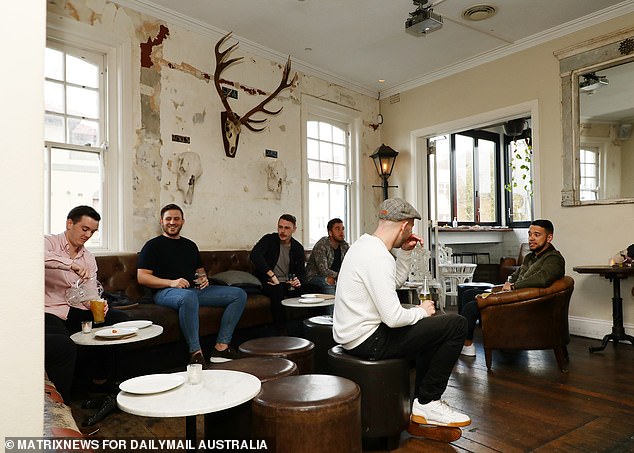 The first three slots for Friday, Saturday and Sunday were gone in just seven minutes, while a further eight slots – including some weekday sessions – went within hours 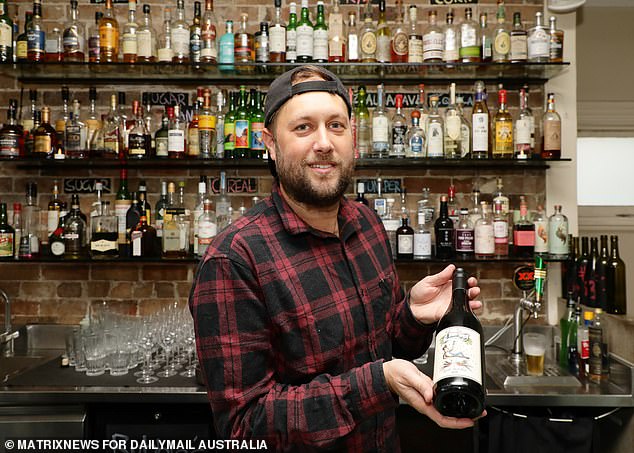 The hotel’s owner Ben Siderowitz (pictured) said that the pub had 4,000 on a waitlist for a slot at the pub 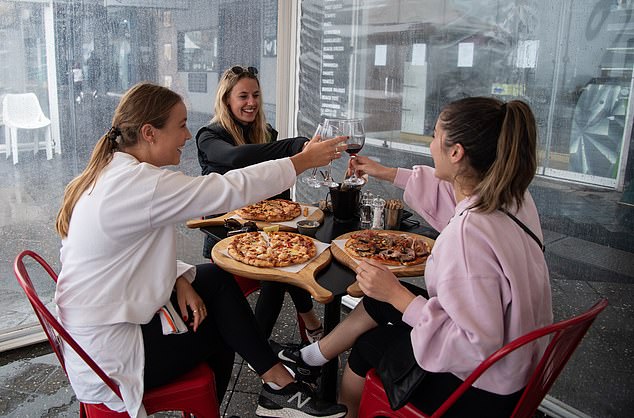 Mr Siderowitz said he could not believe the enormous reaction to his idea, which has since been copied by pubs and restaurants across the city – with the response much the same.

‘I haven’t slept in four days. I had to put up an out of office email so the notifications would stop, because they were coming day and night,’ The Corner House boss told Daily Mail Australia.

‘I didn’t even think I was doing anything revolutionary, but everyone is just so thirsty and desperate to get out of the house.

‘We started with just Friday and Saturday nights, and a Sunday session and thought: “Let’s see if we can get three booked out”. Well, they went within seven minutes.

‘Now we’ve got seven days booked out, with double slots on four of those days and a further 4,000 people who have put their names down on the wait list if restrictions are eased further.’

In the Northern Territory, pubs and bars do not need to adhere to the same 10 person restrictions in place elsewhere.

‘It’s been a long time coming and it tastes pretty good,’ he told the camera.

‘That might be the first of many this afternoon.’

He was followed by the NT’s Chief Minister Michael Gunner, who poured his first beer at midday and said: ‘I think I’ve earned one and I think I lot of Territorians out there have earned a beer as well’. 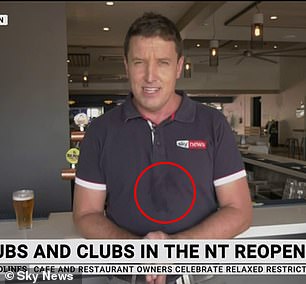 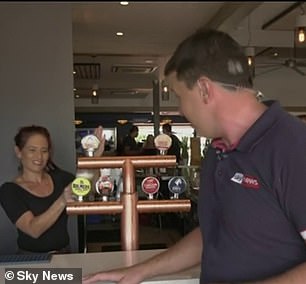 Sky News reporter Matt Cunningham took his first sip live on air at Darwin’s Beachfront Hotel as the clock struck midday, with restrictions on pubs and clubs in the Northern Territory eased 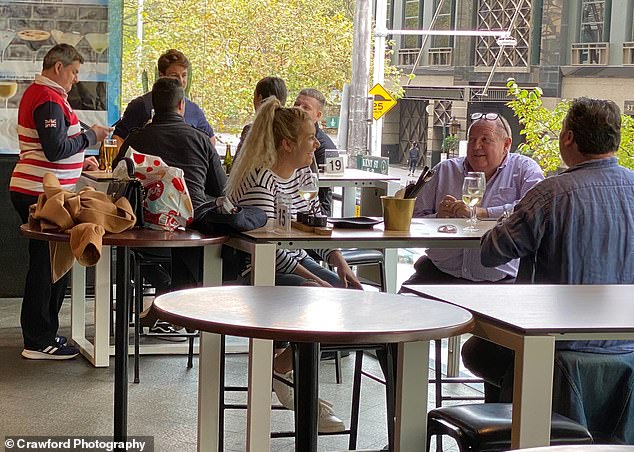 A long lunch was in order for some office workers in Sydney’s CBD, who enjoyed a drink and some Asian food at Dumpling Bar Restaurant 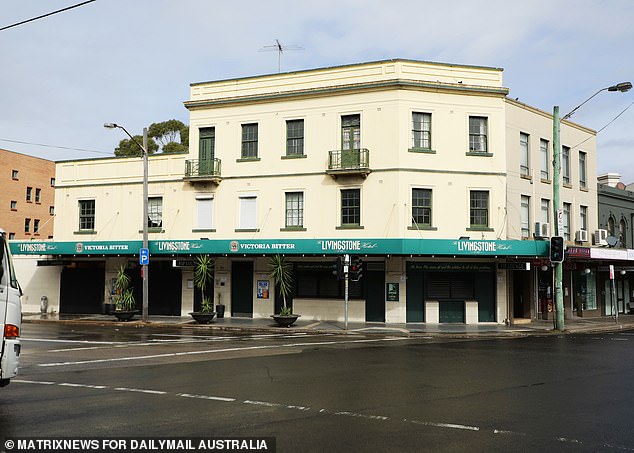 While some pubs have taken the first opportunity to let patrons back inside, others such as The Livingstone in Petersham have kept their doors and windows firmly shut – at least for the time being 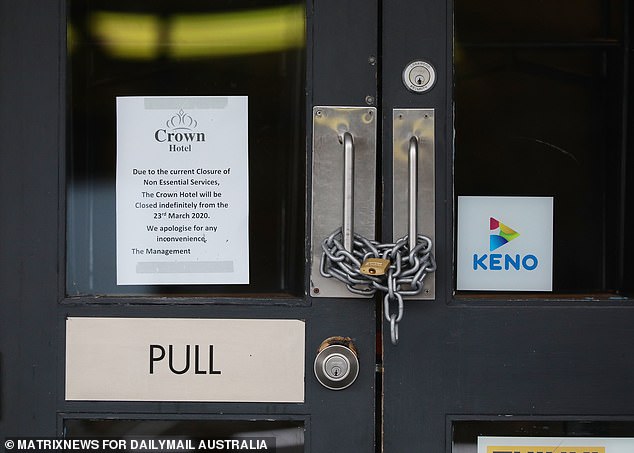 The Crown Hotel in Surry Hills was among those not to embrace the lifting of restrictions, with locks still on its doors on Friday

While many pubs have chosen to stay closed, either taking the opportunity for some much needed refurbishments or seeing the idea of having just 10 people at their bar as just too few to open their doors, many eager restaurants and cafes are cashing in.

Bel and Brio in Barangaroo, Sydney, is booked out for the next week, with more than 160 keen customers desperate to get a sitting.

The restaurant’s event manager Mylene Selosse said the slight relaxation of COVID-19 restrictions is a major boost for the business, who had transitioned to a takeaway service.

‘We’ve been receiving a lot of bookings which is great, we’re actually fully booked out until next week,’

‘We didn’t shut our doors for the past month, we developed an online service, so for us right now it doesn’t make much difference to our kitchen and staff’s (workload) – it is just a plus for us to have ten people in here.’ 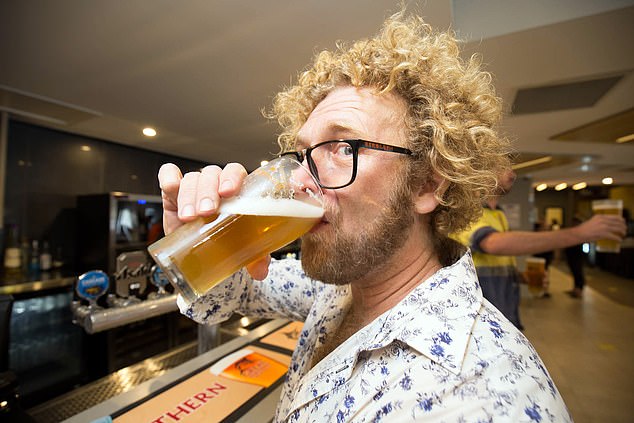 One Darwin resident was happy to see pubs reopened, hurrying into his local to down a beer at midday 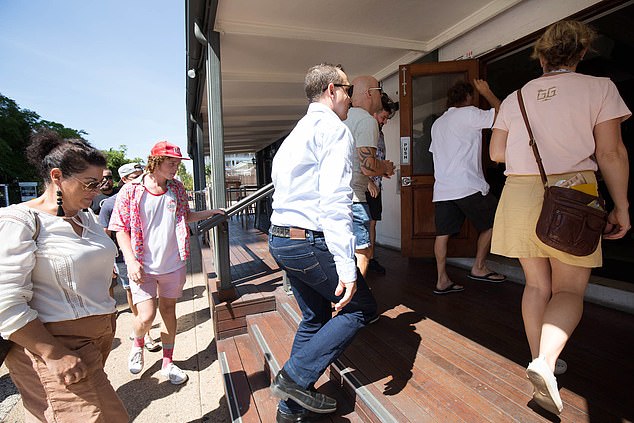 So eager were those in the Northern Territory to get back to the pub, queues formed outside some venues 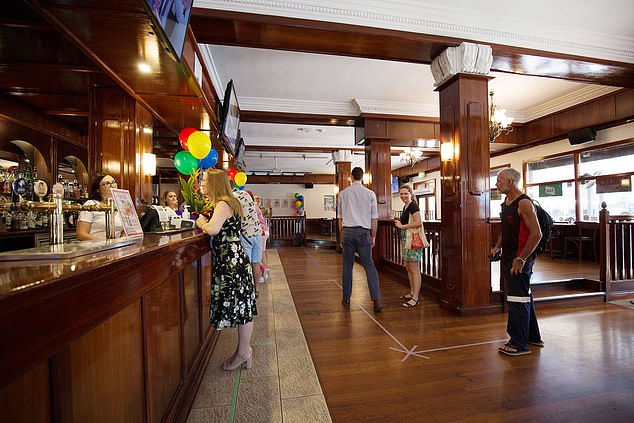 Despite not having a limit on the amount of patrons inside a venue, social distancing is still in vogue in the NT

‘We need to take it slowly, but right now we are seeing restrictions changing every two weeks or so. So hopefully in two weeks we can have 20 people in here to serve!’

While some businesses have embraced ‘Freedom Friday’, others were slow to get on board and will wait until next week to return to internal dining.

Ljubo Milicevic, manger of north Bondi cafe Porch and Parlour, said only being able to have 10 people sit down for a meal is not worth it for their bottom line.

‘As far as us being a smaller cafe, our capacity isn’t great so it doesn’t really benefit us to only having 10 people at any one time, in or outside the venue,’ Mr Milicevic said.

‘We’re lucky, we can operate as a takeaway venture, whereas for wine bars and restaurants it’s all about the experience of sitting in.

‘All our friends at business up the road are fully booked out tonight, which is good for them and good for us, because we’ve got somewhere to go.

‘It’s nice that things seem to be getting back to more of a normality, I think life for everyone is going to be more peaceful now – with less fear in the air.’ 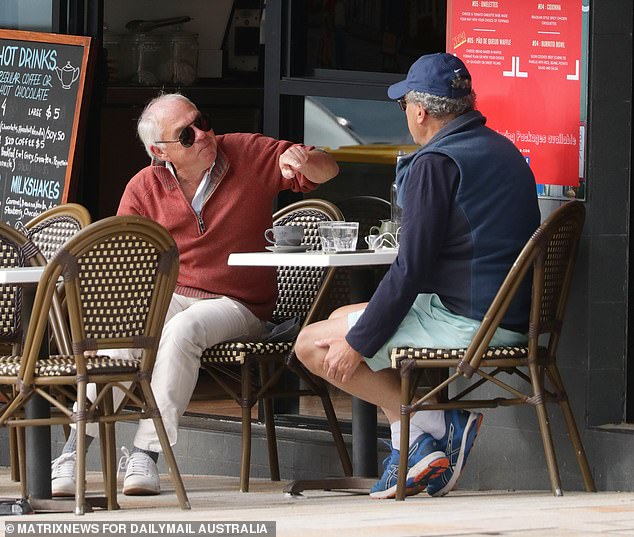 Long-time Bronte locals Jack (left) and Geoff (right) were happy to be able to once again sit at their regular cafe, which they said they would easily visit twice a day pre-COVID-19 pandemic 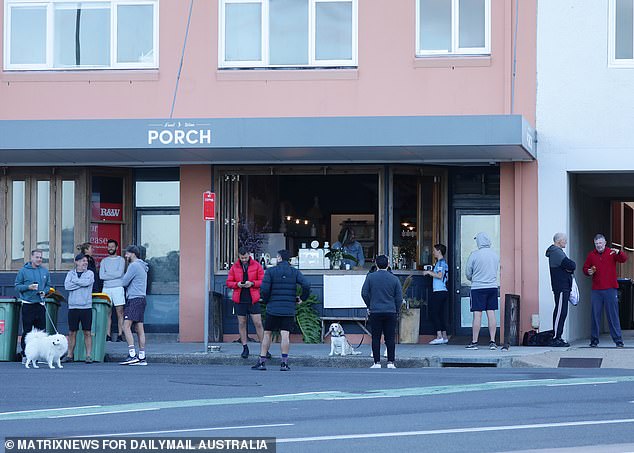 Ljubo Milicevic, manager of north Bondi cafe Porch and Parlour (pictured), said only being able to have 10 people sit down for a meal meant it was not worth them reverting from the takeaway operation they have mastered over the past few months 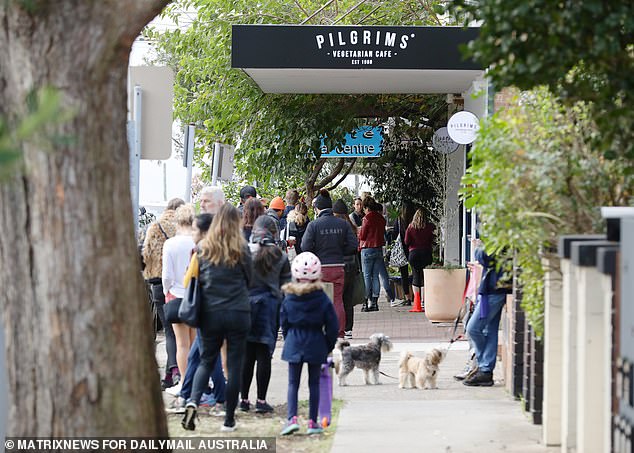 While they could have sat down inside elsewhere, dozens queued to get a coffee at the popular Iggy’s Bread cafe in Bronte on Friday morning

Leading Sydney chef Bret Cameron, who runs Three Blue Ducks in Bronte, said they had also decided to wait until next week before allowing patrons to dine-in.

He admitted that despite diversifying his business to offer takeaway or cook at home meals, the past few months had been incredible difficult – especially as the ‘goal posts continue to move’.

‘For us, we’re already doing takeaways, so putting seats outside isn’t adding any kind of pressure, but we’re not doing table service,’ Mr Cameron said.

‘From next week we’ll be opening for groups of 10, but we just weren’t ready today. I want to do it right and the goal posts are always moving, so we’ll take out time over the weekend and bring back internal dining from Monday.

‘It’s been tough, it’s been really tough. We’ve got our same core group of staff as we have had for the past few months and we’ll begin to bring some back who have been on jobkeeper.’