Bonnie Tyler totally understands that every now and then we fall apart.

So naturally she was there for her dear friend Sir Cliff Richard during his recent ordeal with the BBC and the South Yorkshire police.

‘I supported him by letting him know that it was absolutely absurd what they were saying,’ Tyler says angrily. ‘I’d meet him and go out for lunch and be seen with him. It was so unfair what was said. So unfair.’

The famously husky voice rises with indignation and her Swansea accent thickens dramatically. ‘My God, if you know Cliff he would never ever do anything like that,’ she says, dismissing the allegations of abuse made against the entertainer. ‘He had such a terrible bloody time, but he’s over it now and he’s flying.’

Bonnie Tyler’s unique voice – once described as ‘a foghorn of longing and intent filtered through the Port Talbot smog, Elnett hairspray and dry ice’ – sounds as fresh and familiar as it did on her mega-hits Total Eclipse Of The Heart, Holding Out For A Hero and It’s A Heartache

Sir Cliff won a high court privacy case last summer against the BBC over its coverage of a police raid on his apartment in Sunningdale, Berkshire, in August 2014.

‘It was the police, I think, that were out of line more than anything,’ she adds pointedly.

‘The BBC are playing Cliff’s records now. It’s as if they’re apologising – and he deserves it. If they weren’t on the wagon with the police, this would never have happened.’

The duet she has recorded with Cliff, 78, is called Taking Control. ‘It’s great,’ she insists. ‘Very upbeat, perfect for us.’

Sir Cliff is just one of a trio of knights – take a bow, Sir Rod Stewart and Sir Barry Gibb, 72 – who have collaborated with Tyler on her outstanding new album, Between The Earth And The Stars. She has also teamed up with Status Quo’s Francis Rossi, who is merely a lowly OBE. Tyler held out for a hero, then four arrived at once.

‘Poor Francis, he’s got some catching up to do,’ chuckles Tyler, enjoying a chat in a cosy country pub in Hampshire where she’s filming with TV chef James Martin later today.

Tyler’s unique voice – once described as ‘a foghorn of longing and intent filtered through the Port Talbot smog, Elnett hairspray and dry ice’ – sounds as fresh and familiar as it did on her mega-hits Total Eclipse Of The Heart, Holding Out For A Hero and It’s A Heartache.

Her signature gravel-gargling rasp came after she rushed her recuperation period following an operation to remove nodules from her vocal cords in 1976. Even her speaking voice is an instrument of wonder, with a great pantomime cackle of a laugh that she deploys frequently.

It was ‘a lifetime dream’ to sing with Sir Rod, confesses the singer, as she knew the distinctive grain in their voices would rub along well. In the end, a simple email via a mutual friend secured his services. ‘He got back to me personally to say yes, the very next day, from his own email account, and we’ve been in touch ever since.’

She agrees that the 74-year-old roué is still an attractive man. ‘But steady on, I’m a married woman,’ she says, having been with her husband, Robert Sullivan, for 46 years. ‘But I love Rod’s sense of style. Even when he went to meet the Pope and everyone said Rod still had his slippers on, I thought he looked great in those Gucci shoes with the fur coming out the back. He’s got that certain something and he always looks immaculate. Anyway, I’d better stop there, or I’ll have Penny [Lancaster, Stewart’s wife] after me. I’m too old for him anyway, and definitely not tall enough.’ 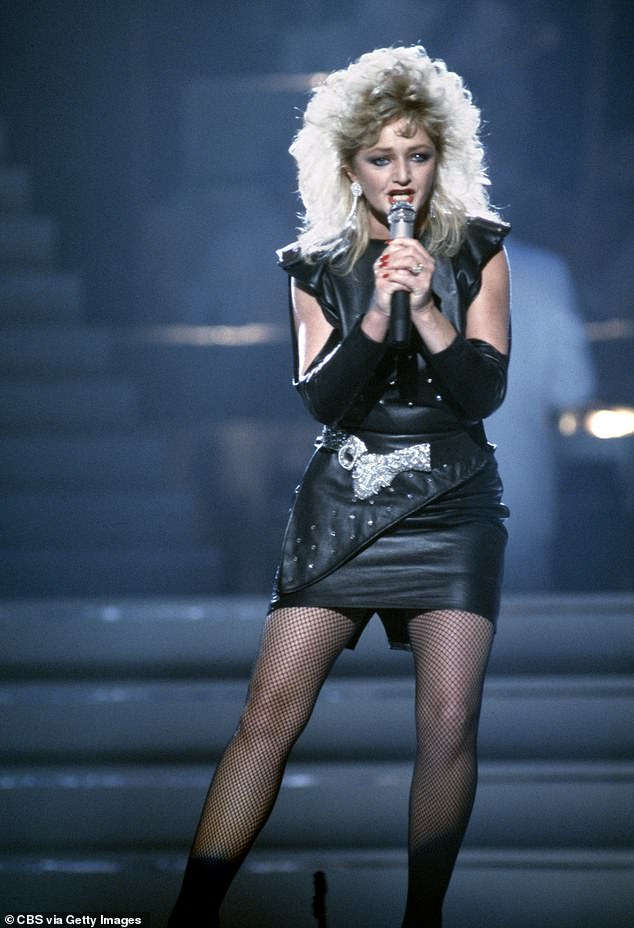 Bonnie Tyler performing at the Grammy Awards in 1984. She may be wealthy, with a net worth of £7.5 million, but Tyler is unpretentious to a T

Tyler’s last knight, legendary Bee Gee Sir Barry Gibb, wrote a song, Seven Waves Away, specifically for her. ‘That was pretty mind-blowing,’ she admits. ‘He’s written for the greats – Barbra Streisand, Dolly Parton, Frankie Valli – and here he was doing one for me. I’m still astonished that people even want to work with me, let alone a load of sirs.’

Tyler has been Sir Cliff’s confidante for nigh on a decade. They occasionally holiday together in Barbados and both have places in Portugal, where they often get together for a curry. ‘The only problem,’ she grumbles cheerily, ‘is when people want a photo with us both, and you’ve got a mouthful of spinach bhaji.’

At 67, she is bright-eyed and fresh-faced (‘Thank God for Botox,’ she deadpans, features immobile) but recoils in mock horror when asked if she attends a gym. Her jaw though, she maintains, gets plenty of exercise: ‘I’m a terrible chatterbox.’

Tyler is only lost for words once this morning, when asked if her former judo-champion hubby has ever thrown her around a dojo.

‘No way,’ she splutters. ‘Actually, he doesn’t do judo any more, just light weights, and he’s a very gentle guy, unless someone crosses him. He went to the 1972 Olympics in Munich, the only Welshman in the British team. I didn’t go. I couldn’t afford to in those days.’

She could probably afford it today. Bonnie and Robert, 69, a property developer, have an impressive portfolio that includes a dairy farm in New Zealand (‘thousands of acres of land’), houses (‘we had 22 but sold 17’), stables in Berkshire and a quarry in Wales (‘he invests very cleverly’). The couple, who have never had children, divide their time between the Mumbles in Swansea, and the Algarve.

She may be wealthy, with a net worth of £7.5 million, but Tyler is unpretentious to a T, and even apologises for name-dropping when she casually mentions that Michael Douglas once popped around on Christmas Day.

‘Catherine [Zeta-Jones] is Robert’s cousin, see,’ she explains. ‘And when she and Michael first got together they came over for our traditional Christmas midday party. He was great with all the guests and joined in with the carols.’

Comedian Rob Brydon believes that Zeta-Jones’s accent gets stronger the second she sets her suitcase down in Swansea. ‘Although she’s hardly ever home these days, I can believe that,’ grins Tyler. ‘But she’s an actress so at least she can get rid of her accent – I can’t. I had a crash course in elocution once to try to sound posher when I spoke between songs but, as you can tell, it didn’t work.’

Tyler had a successful career singing in nightclubs during the early Seventies, but it was meeting eccentric Meatloaf songwriter Jim Steinman in 1982 that set her career ablaze. Yet despite a worldwide smash with the Steinman-penned Total Eclipse Of The Heart, Tyler hasn’t received the same critical acclaim that her male counterparts have enjoyed.

‘You mean because I’m female, I’m not held in the same esteem?’ she ponders. ‘I’ve never thought about it that way.’

But you sense that this no-nonsense firecracker won’t be joining the #MeToo movement, preferring to take matters into her own hands, quite literally on occasion.

Michael Douglas popped by on Christmas Day. He joined in with all the carols

‘One time in Denmark a journalist from one of their big newspapers grabbed me by the hair. This was when I had the really big curly hair, cut in layers and scrunched, never permed. He grabbed hold of my hair, pulled it and said, “Is that a wig?” So I grabbed his balls and said, “Are they real?” I squeezed them with my nails and everything. You should have seen his face. In agony, he was.’

Tough as Tyler can be, there is a touchingly tender side to the singer too. I ask when she last experienced ‘a heartache’ and her reply is nothing short of heart-breaking. ‘It’s terrible when your parents die,’ she says sadly. ‘Both of mine are passed now and that’s horrible. There’s no way to get through it. You just try to keep their memory alive. I’ve got pictures of them everywhere, they were wonderful.’

Tyler brightens when the conversation returns to her album and it is suggested that perhaps employing three knights of the realm is simply an intelligence-gathering exercise with a view to a future damehood.

‘I’ve got no chance of that happening,’ she hoots. ‘Anyway, I don’t know about Dame. Maybe Lady would be better. But, seriously, would I accept a damehood – of course I would!’ Raucous laughter fills the room once more. ‘Abso-bloody-lutely.’

Bonnie Tyler’s new album, ‘Between The Earth And The Stars’, is out on March 22