Bono has vowed to wave the blue EU flag at his next concert in a ‘provocative’ act of support for Europe amid the Brexit row.

The U2 frontman said it is the job of a rock star to shock – and he hopes to ruffle feathers by waving the Brussels emblem when their tour kicks off in Berlin this week.

The millionaire singer – an arch critic of Britain’s looming departure – also railed against the rise of nationalism in Europe and defended the Brussels project.

He said watching Angela Merkel open Germany’s doors to more than one million Syrians at the height of the refugee crisis made him ‘proud’.

And he thanked the EU for backing Ireland in the  row over what should happen to the Irish border when Britain quits the EU.

Bono made the remarks in an article for the German newspaper FAZ, in which he warns that the European project is under threat from ‘extremist politics’.

He wrote: ‘I’m told a rock band is at its best when it’s a little transgressive: when it pushes the bounds of so-called good taste, when it shocks, when it surprises.

‘Well, U2 is kicking off its tour in Berlin this week, and we’ve just had one of our more provocative ideas: during the show we’re going to wave a big, bright, blue EU flag.

‘I’m guessing that even to a rock audience, waving an EU flag these days is either an annoyance, a bore, a kitsch reference to the Eurovision Song Contest but to some of us it has become a radical act.’

He said that some Irish people feel closer to those in Europe than their fellow countrymen – but the Brussels project is now under threat.

He wrote: ‘Ireland is a place with a special emotional connection to Europe, and the idea of it. 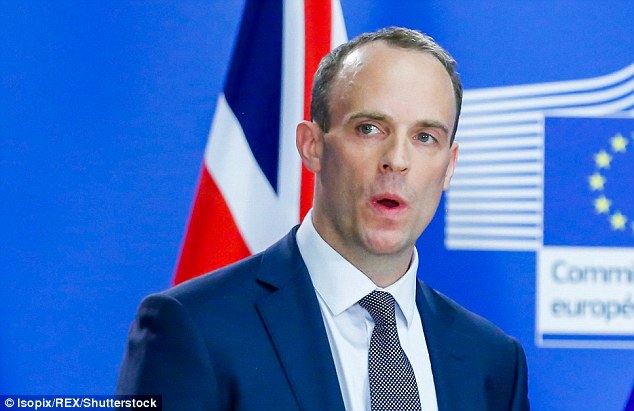 ‘Maybe it’s because we used to feel closer to Europe than we did to some of the people on our island.’

The singer, 58, said the peace and prosperity Europe has enjoyed post World War Two is down in large part to the EU, but the continent is being rocked by a loss of ‘faith’.

He wrote: ‘As a European I feel proud thinking back to when Germans welcomed frightened Syrian refugees (I’d feel prouder had more countries stepped up); proud of Europe’s fight to end extreme poverty and climate change; and, yes, extraordinarily proud of the Good Friday agreement and how other countries have rallied behind Ireland on the border issue, revived by Brexit.

‘I feel privileged to have witnessed the longest stretch of peace and prosperity ever on the European continent.

‘But all these achievements are under threat, because respect for diversity—the premise of the whole European system—is being challenged.’

And he urges European to rally behind the EU ‘in these troubled times’ so that Europe ‘is a thought that needs to become a feeling’.