Proving you can’t judge a book by its cover! Bookworms reveal the most bizarre things they’ve found hidden in the pages of second-hand reads, from money and food to a dead LIZARD

By Freya Drohan For Dailymail.com

Books are history in themselves, but it seems like many readers regularly stumble upon antiques hidden within the pages.

A thread detailing items left within the pages of books showed an array of interesting, unusual and fateful finds.

Old school: A list details the most unusual and interest things unearthed by readers, including this vintage ad for a 25 cent tooth powder which was found in a Bible from the 1860s 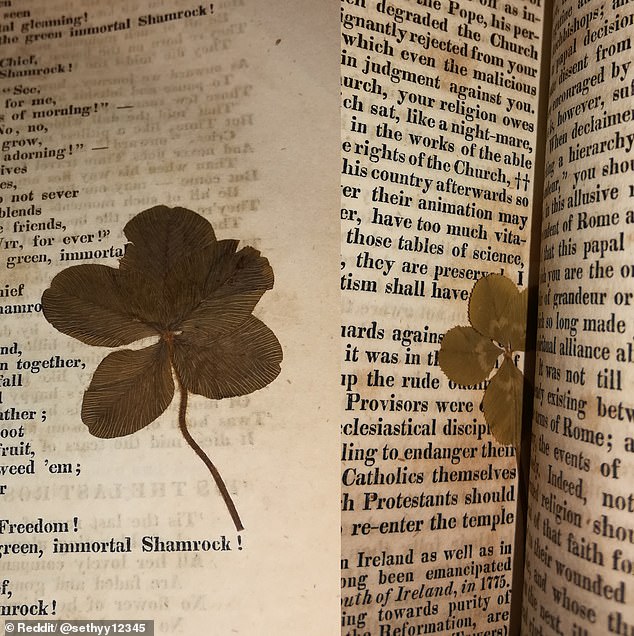 How lucky! A reader came across two ultra rare four and five leaf clovers in a book that dated back 200 years

Dried plants – and in some cases spiders, roaches, book worms and even a lizard – were also stumbled upon.

It seems that many people wanted to bestow some luck on to the next reader who picked up their book, with numerous people finding $2 bills or notes scrawled with the word, ‘surprise’.

Speaking of good fortune, what could be luckier than finding a rare four-leaf clover, as one reader did in a 200-year-old book.

In more bizarre instances, someone found a ‘drug stash’ in a hollowed-out book while another person came across a crushed can. One reader was perplexed to come across an actual taco that had been used in place of a book mark.

And perhaps the best case scenario? When readers picked up editions of novels and were stunned to find the author’s signature. 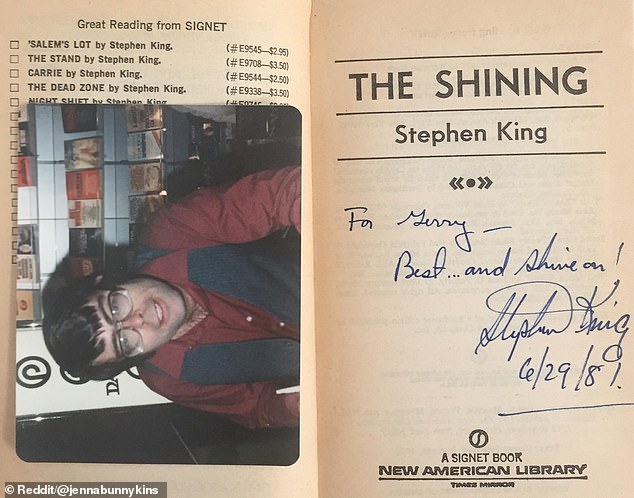 That’s gotta be worth something: A shocked reader found a photo and an autograph of Stephen King inside a library copy of The Shining 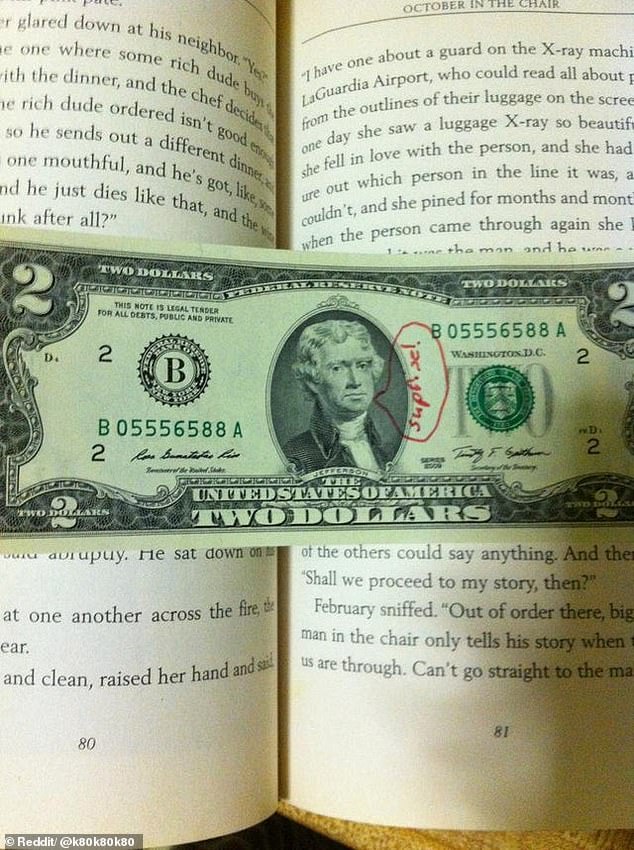 Lucky! Traditionally, rare $2 bills are considered lucky – so one reader was delighted to find this in a library book with the word ‘Surprise!’ etched on it 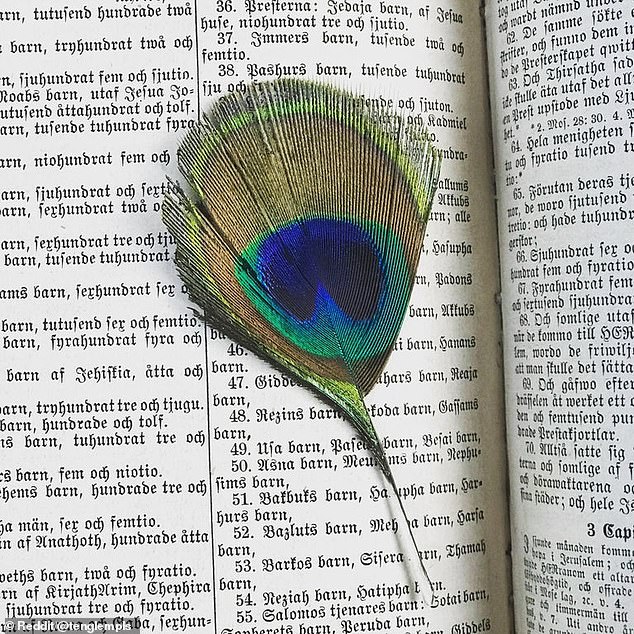 Ancient: A reader found this peacock quill in a Bible dating back to the 1800s that was written in old Swedish text 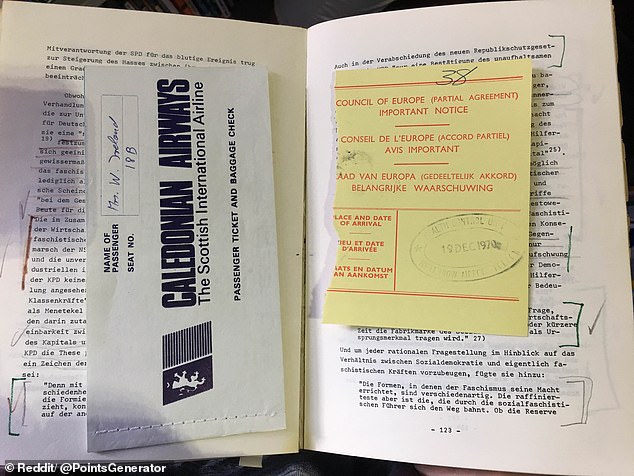 Leaving on a jet plane: A Reddit user found a plane ticket from 1970 for the now-defunct Caledonian Airways (which ceased operation that same year) 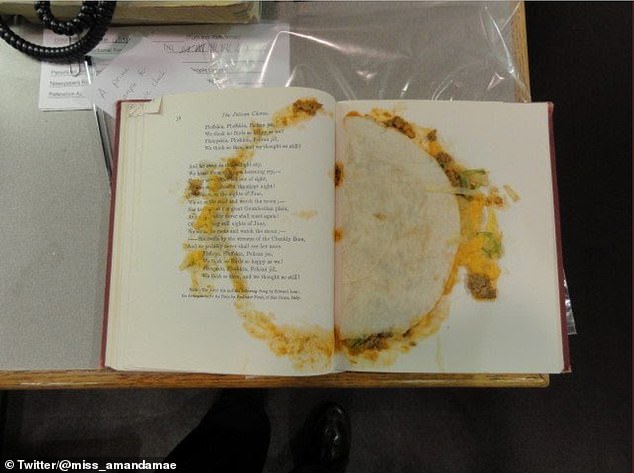 WTF? A library user was taken aback to find that the previous reader of their book had used a taco as a book mark 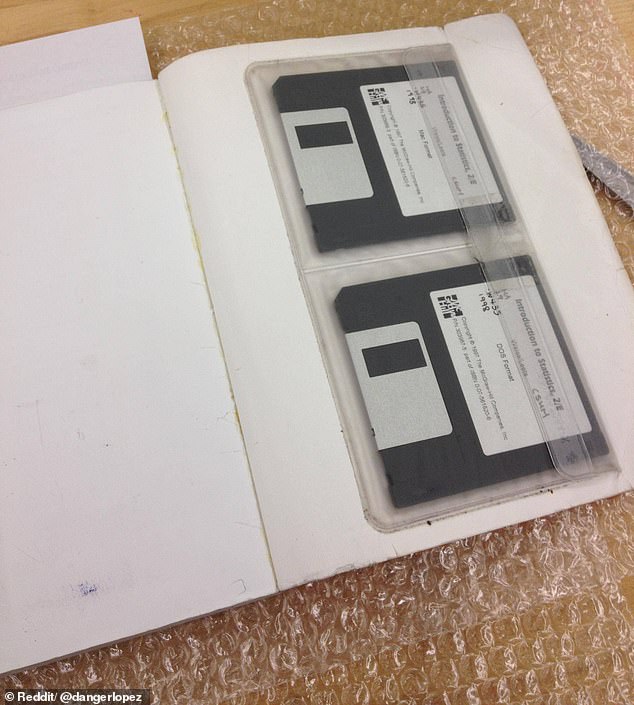 Remember these? A Reddit user joked, ‘What are these save buttons doing in my book’ as they came across some outdated floppy discs 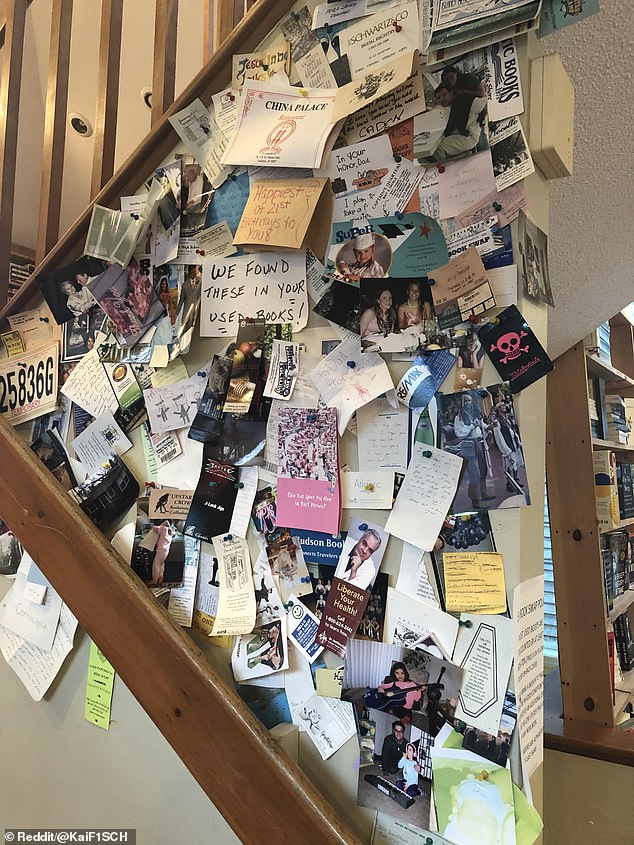 Display: A wall of ‘found’ items compiled by a used book store makes for fascinated glimpse into  people’s personal lives 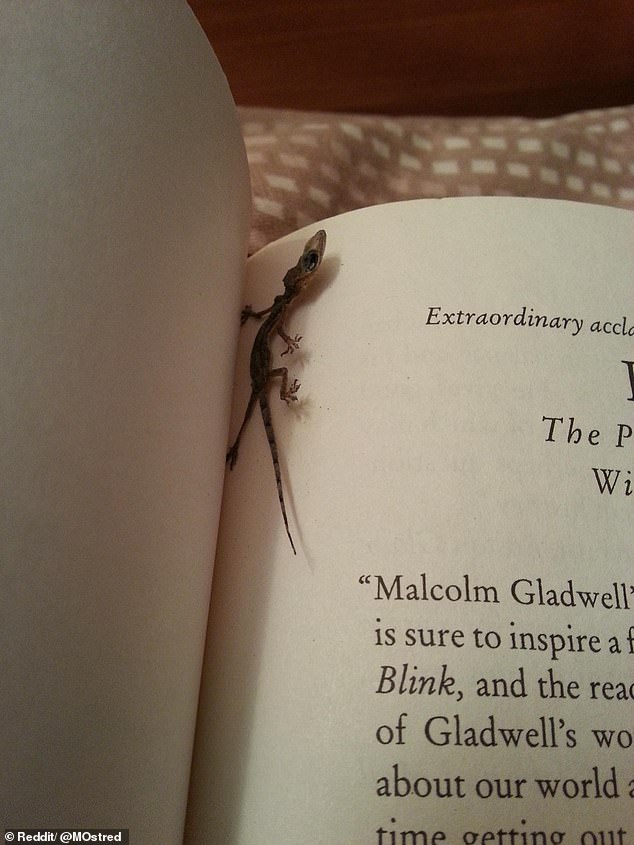 Yikes! A reader stumbled upon a dead lizard in a book and took to Reddit to share the questionable find 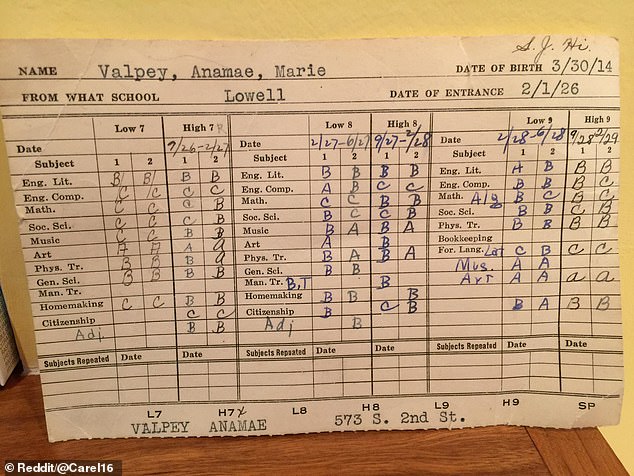 History: One woman shared how her son had found a near-100-year-old school report card for a Ms Anamae Marie Valpey 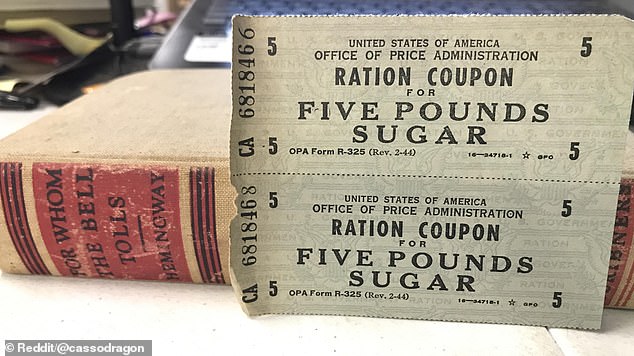 Rations: A history-lover was happy to find Government-issued ration coupons inside a vintage Hemmingway novel 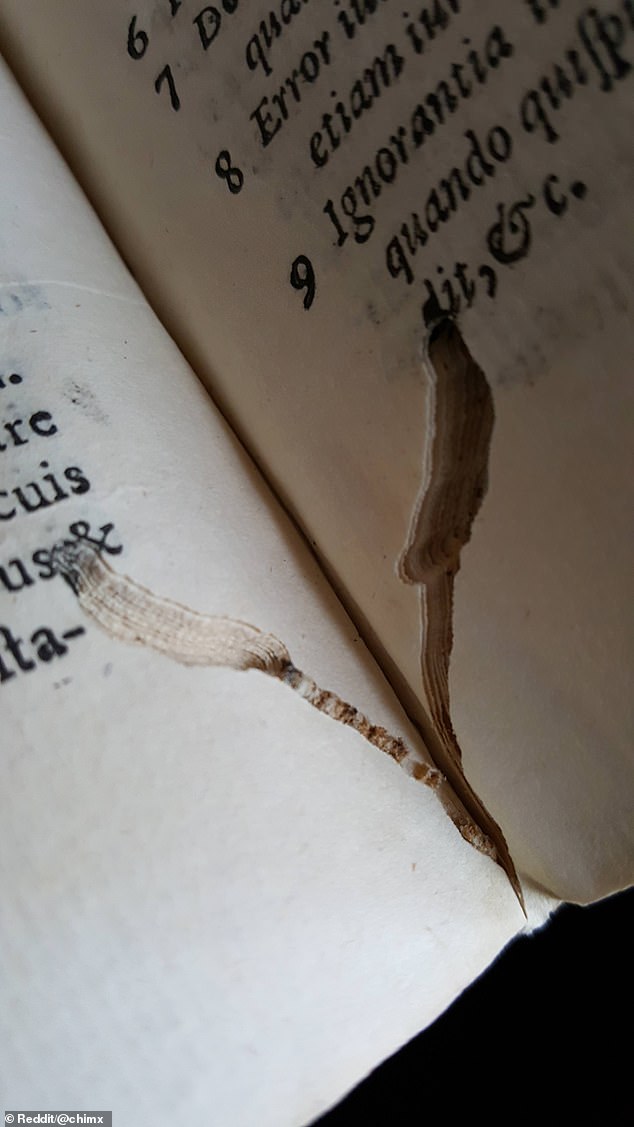 Damage: A reader who thought their book was carved into, suddenly realized that it had been burrowed into by a book worm 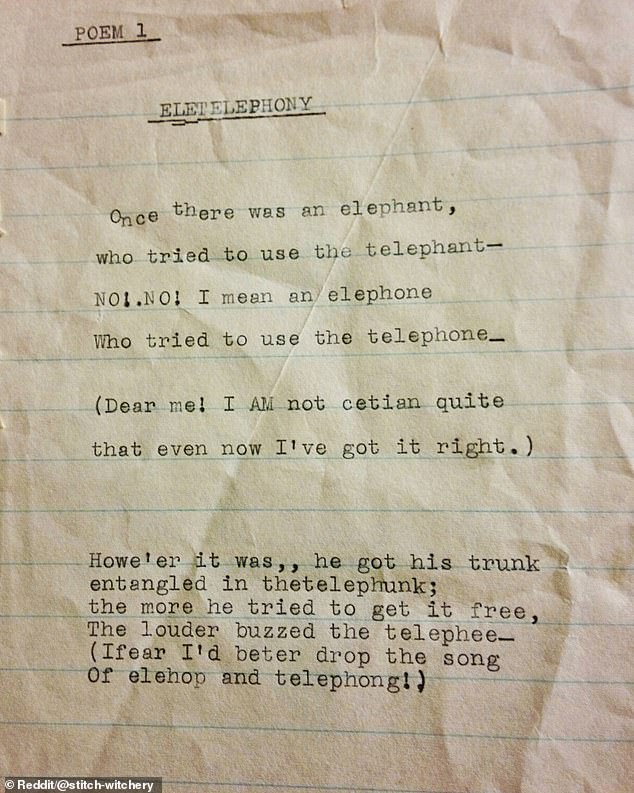 Wordsmith: A reader found this cute poem tucked into a children’s book from 1949 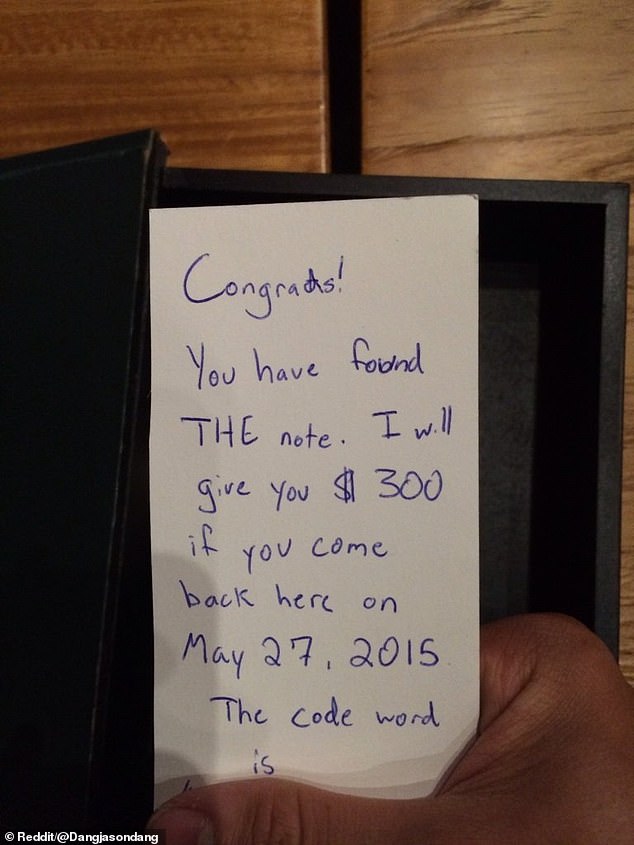 Mysterious: A reader found this note, likely written by a child or teenager, in a book in a cafe five years ago 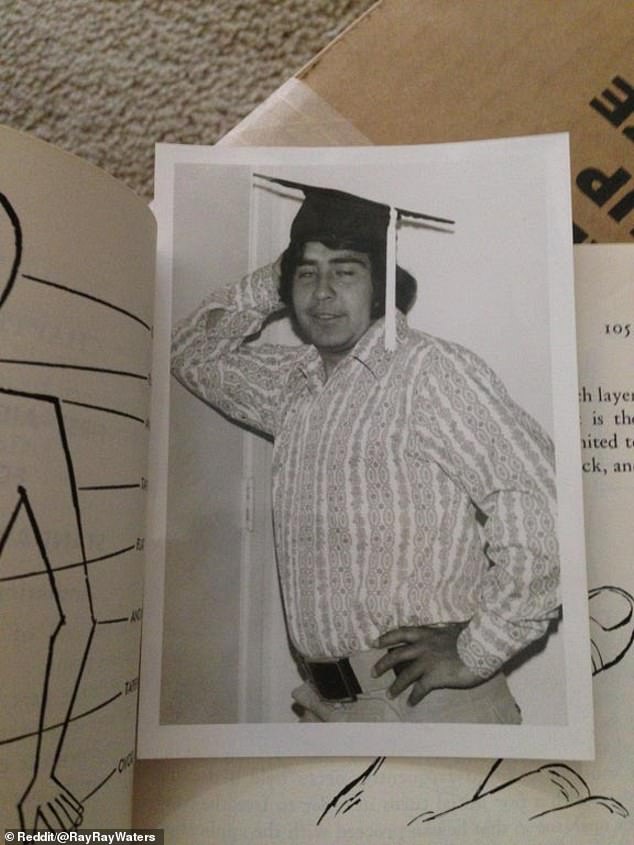 Who is he? A reader found this rather hilarious snap in a 1947 Red Cross First Aid textbook 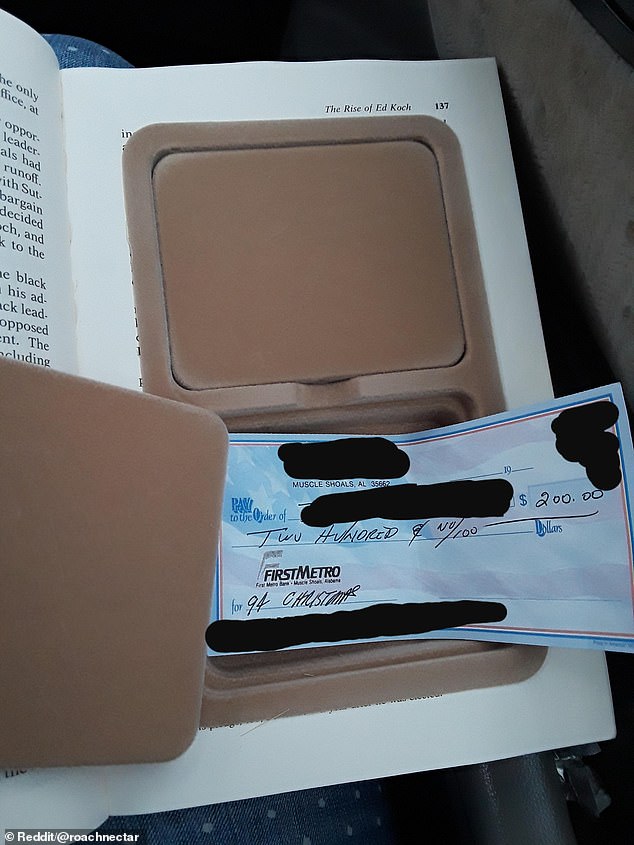 Hidden: A book lover picked up this tome at a thrift store only to find it contained a hidden compartment with a $200 check from 1994 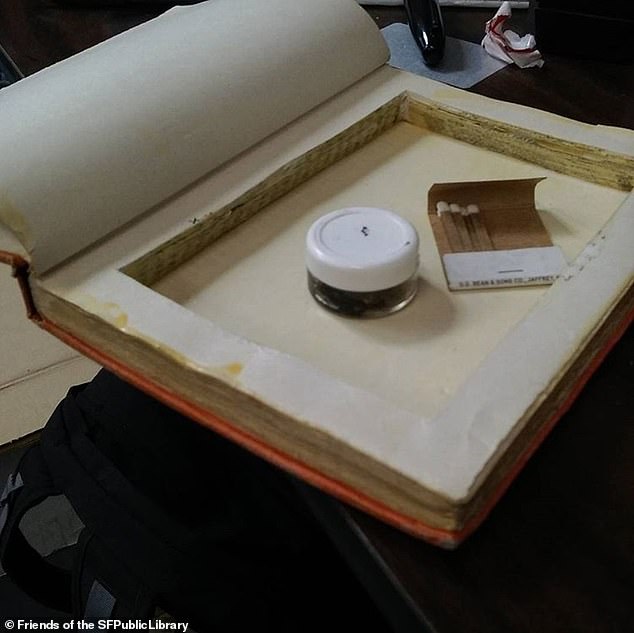 Contraband: A San Francisco shelter found a drug stash in a book that had been donated