England and Scotland stars were booed for taking a knee moments before kick-off in their hotly anticipated Euro 2020 encounter at Wembley.

Both sets of players took a knee just seconds before the game got underway, where the boos were drowned out by applause and cheers inside the stadium.

But Scotland’s national anthem, Flower of Scotland, was booed by England supporters despite pleas from the Football Association for supporters to respect the anthem.

Scotland’s players opted against taking the knee before their Euro 2020 opener against the Czech Republic on Monday, with both teams instead deciding to stand. They then decided to stand with England as a symbol of unity.

Speaking of those plans, Scotland captain Andy Robertson said: ‘Our position was – and remains – that the focus must be on meaningful change to fight discrimination in football and wider society.

‘In Scotland, the football family has stood against racism all season. It was our collective view that the national team would do the same.

‘Our stance is that everyone, players, fans, teams, clubs, federations, governing bodies and governments must do more. Meaningful action is needed if meaningful change is to occur.

‘But it is also clear, given the events around the England national team, taking the knee in this tournament matters as a symbol of solidarity.’ 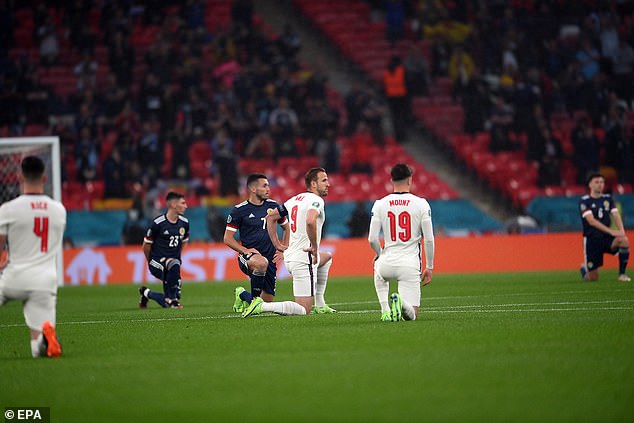