Deliveroo has fired the starting gun on a blockbuster £7billionn stock market float in London.

In a major boost to the City, the food delivery firm confirmed it will list its shares in Britain rather than New York, Asia or Europe.

The decision hands London one of its biggest floats in recent years with estimates for Deliveroo’s value ranging from £5billion to more than £7billion.

Big portion: Deliveroo’s float could trigger a windfall of £500m for boss Will Shu, who set the company up eight years ago and holds a 6.9 per cent stake

The deal could trigger a windfall of £500million for Deliveroo boss Will Shu, who set the company up eight years ago and holds a 6.9 per cent stake.

The Mail revealed the company was set to choose London over Wall Street or Hong Kong in January.

Announcing the plan, Shu, 41, said: ‘Deliveroo was born in London. This is where I founded the company and delivered our first order.

‘London is a great place to live, work, do business and eat. That’s why I’m so proud and excited about a potential listing here.’

Claudia Arney, the company’s chairman, added: ‘Deliveroo is proud to be a British company, and the selection of London as its home for any future listing reflects Deliveroo’s continued commitment to the UK.

‘London is not just where Deliveroo was born, it is one of the leading capital markets in the world, with an incredible technology ecosystem, sophisticated investment community and a skilled talent pool.’ 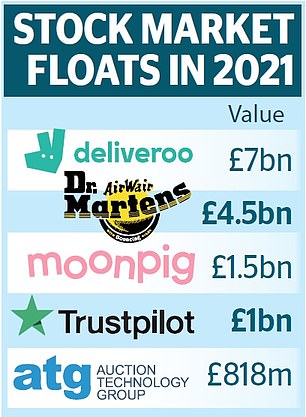 The pandemic has turbocharged demand for food delivery services as lockdowns have forced restaurants to close.

US firm Door Dash was valued at over £40billion when it listed in New York in December while Just Eat Takeaway is valued at £10billion on the FTSE 100. Deliveroo’s decision to list in London partly reflects the fact that its biggest market is the UK, where it is engaged in fierce competition with the likes of Just Eat and Uber.

However, discussions with the Government about its plans are also understood to have influenced the outcome.

For the first three years after the float, Deliveroo is proposing a dual-class share structure that will let Shu and other shareholding managers keep a tight grip over the company.

The proposal is strikingly similar to one recommended in a major review of the listings rules by Lord Hill this week.

Hill, a former EU commissioner asked by Sunak to draw up a blueprint to attract more fast-growing tech firms to the London stock exchange, said: ‘The changes we recommended would make it easier for more companies to follow Deliveroo’s lead, sending out a message that London is open for business.’

Sunak welcomed Deliveroo’s announcement, saying: ‘The UK is one of the best places in the world to start, grow and list a business – and we’re determined to build on this reputation now we’ve left the EU.

‘That’s why we are looking at reforms to encourage even more high growth, dynamic businesses to list in the UK.’

Deliveroo was founded by former investment banker Shu in 2013 and now works with some 140,000 restaurants globally.

It has emerged as one of the winners from lockdowns, as families unable to go out have treated themselves to takeaways.

Other investors who would be able to cash in from the float include Amazon, which invested last year and owns a 16.2 per cent stake, potentially worth more than £1billion.