Thousands of booze-fuelled revellers hit the country’s bars and clubs last night wearing their spookiest attire – but all that partying may have left some feeling pretty ghastly this morning.

Across the country there were scary ghosts, clowns and vampires all visible on the streets as people well and truly got into the spirit of Halloween.

Although not until Wednesday, many used Friday night as an opportunity to sport some of their most outrageous outfits.

And despite the plummeting temperatures they were determined to have a good time, parading through city centres in their frightening garb.

Some may have had too much of a good time however, with pictures showing boozed up party-goers sitting on pavements in Manchester, and teams of police keeping an eye out for any especially worse-for-wear individuals in Birmingham.

No outfit is too outrageous for the people of Manchester, as this trio of daring revellers sport some of their most frightening attire. Hundreds were seen in the city enjoying a boozy night out as people celebrated Halloween a little early 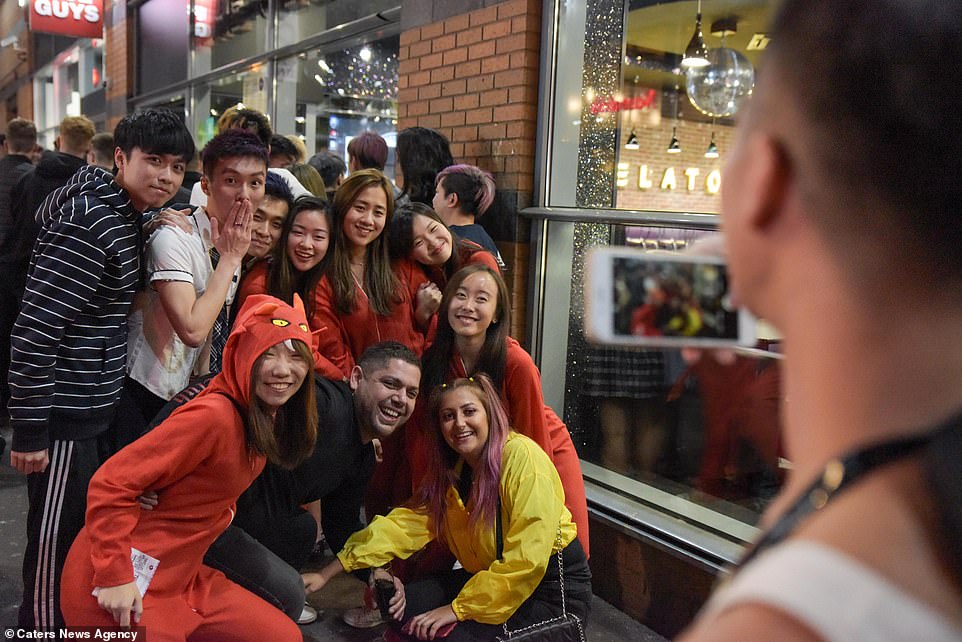 Friends in fancy dress pose for the camera as they queue up for a nightclub in Birmingham. Thousands of revellers took to the streets of the city on Friday night to take part in an early Halloween celebration 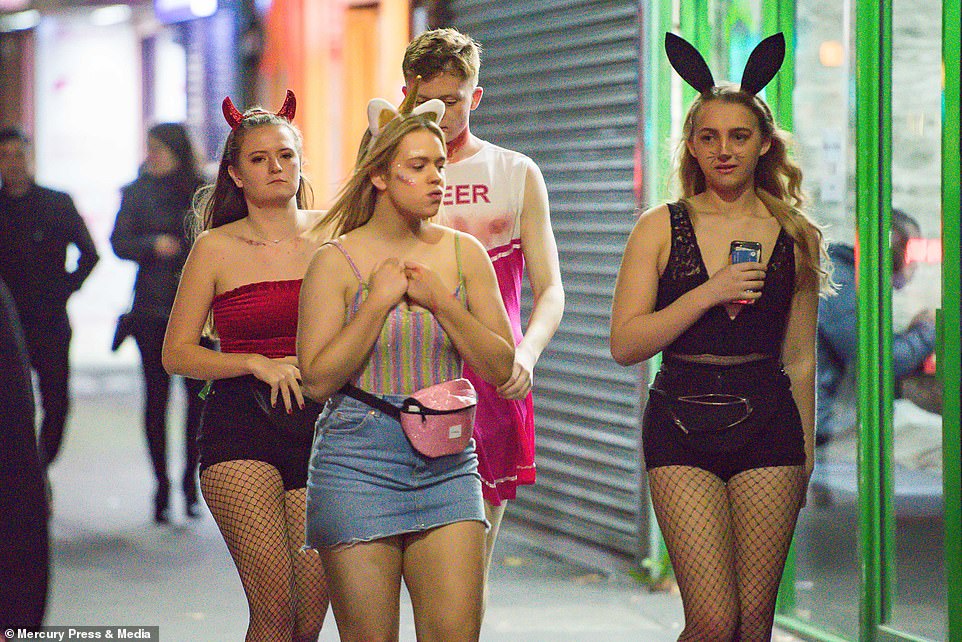 Halloween is not until Wednesday, but many used last night as an opportunity to sport their Halloween themed outfits – some of which included devil horns, bunny rabbit ears and spooky cheerleaders 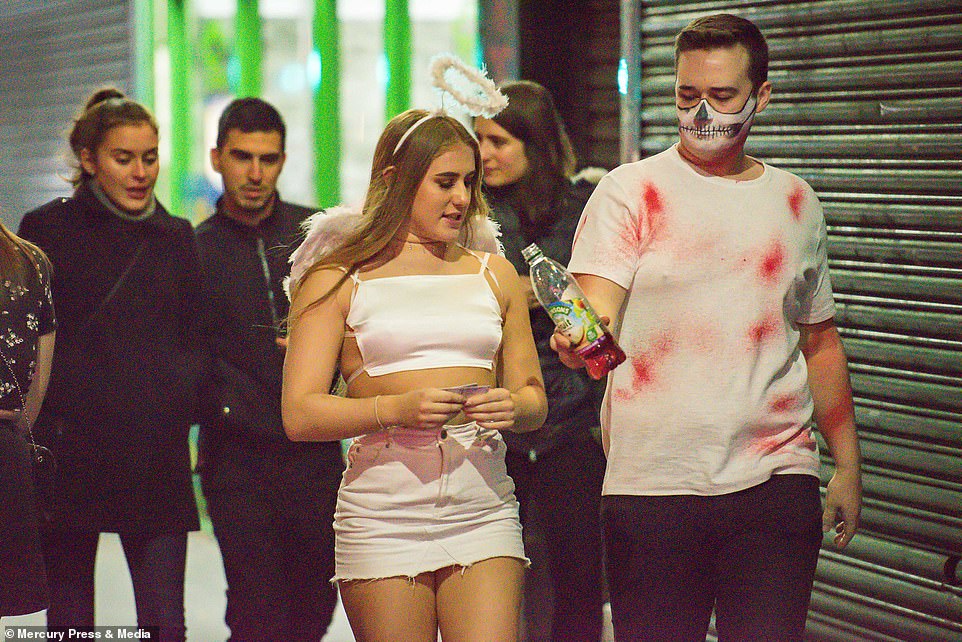 Revellers in Manchester wore some of their spookiest attire as they paraded through the streets on a night out. A touch of fake blood gave one man (pictured right) all he needed to put together his frightening outfit 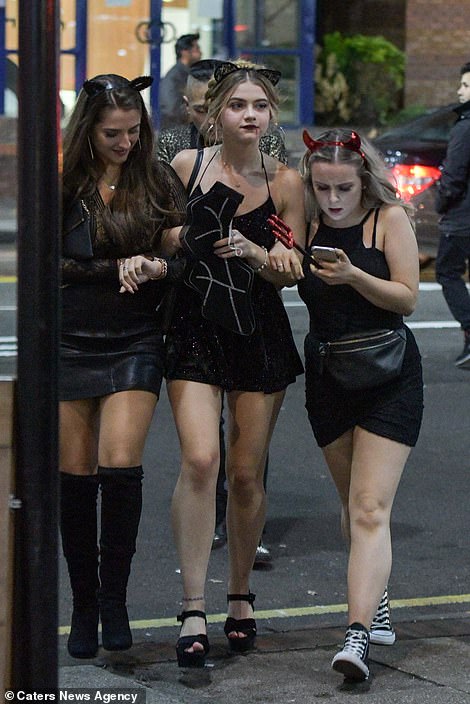 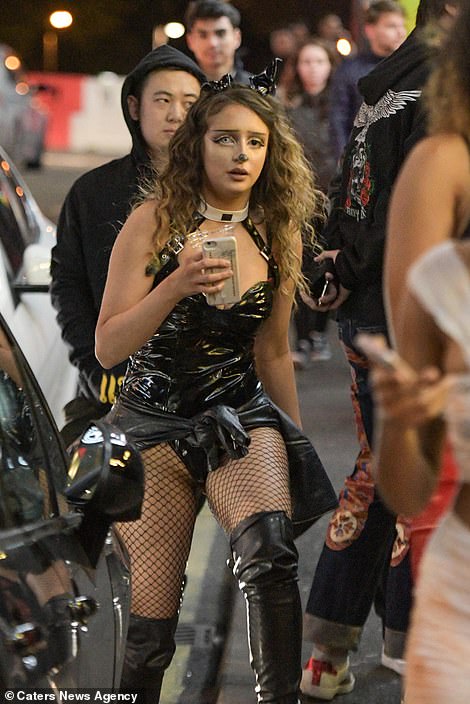 Thousands of revellers took to Birmingham city centre (left and right) on Friday night to celebrate an early Halloween. Several nightclubs in the city had fancy dress, including PRYZM which saw hundreds of people queue up outside, many of whom had donned their spookiest outfits 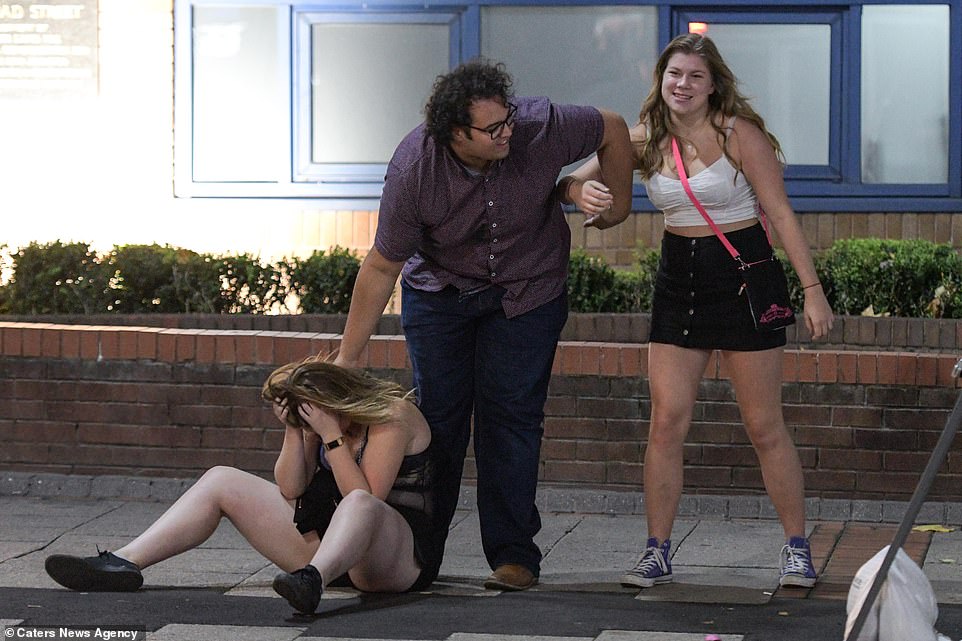 Some might have had a little too much fun, as several revellers were spotted sitting on pavements and taking a break from all the action. One woman has to sit down on a street in Birmingham (pictured) during a night out yesterday 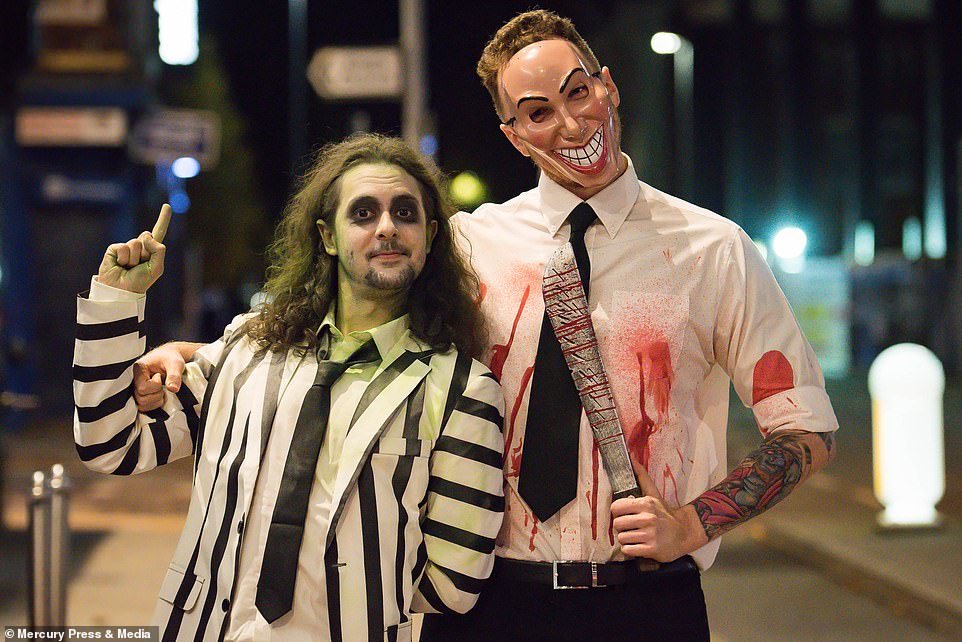 This frightening pair are likely to have given fellow party-goers quite a scare, as they donned their very best Halloween outfits. Fake blood, a mask and mock sword were all this chap (pictured right) needed to put together his spooky outfit 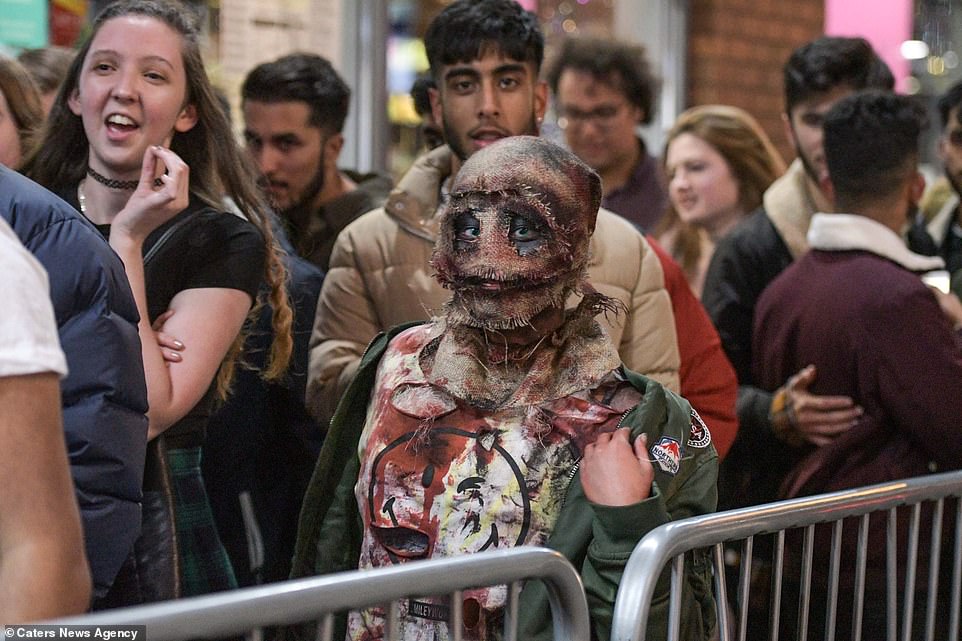 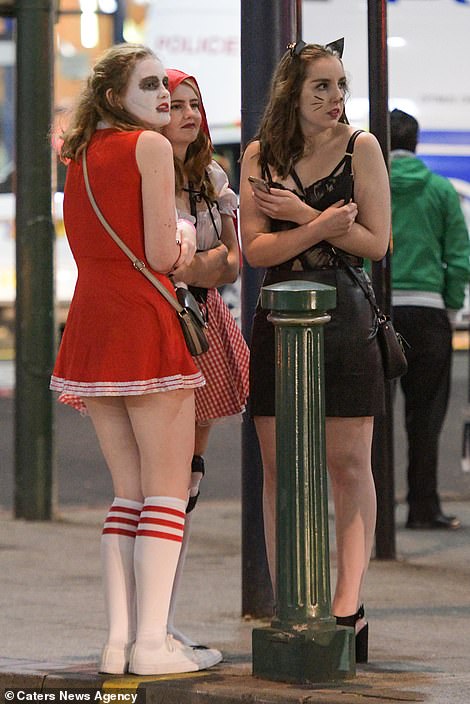 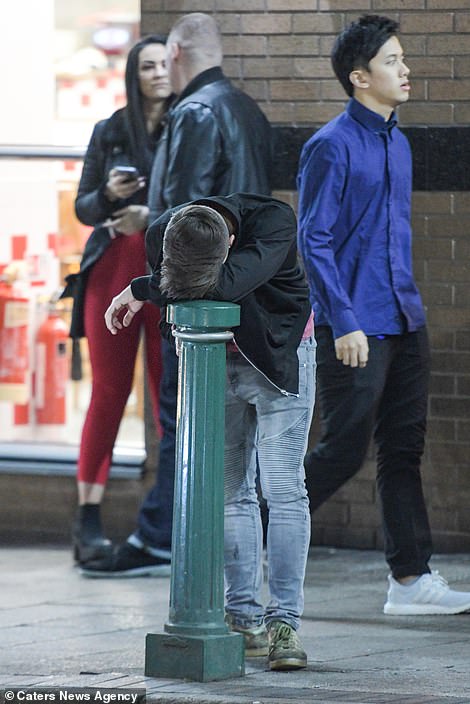 Despite plummeting temperatures, eager party-goers were determined to have a good time. Ditching their winter wear, residents of Birmingham (pictured left and right) hit the streets in some of their spookiest attire. Although the night out eventually took its toll on some revellers (right) who had to take a little rest 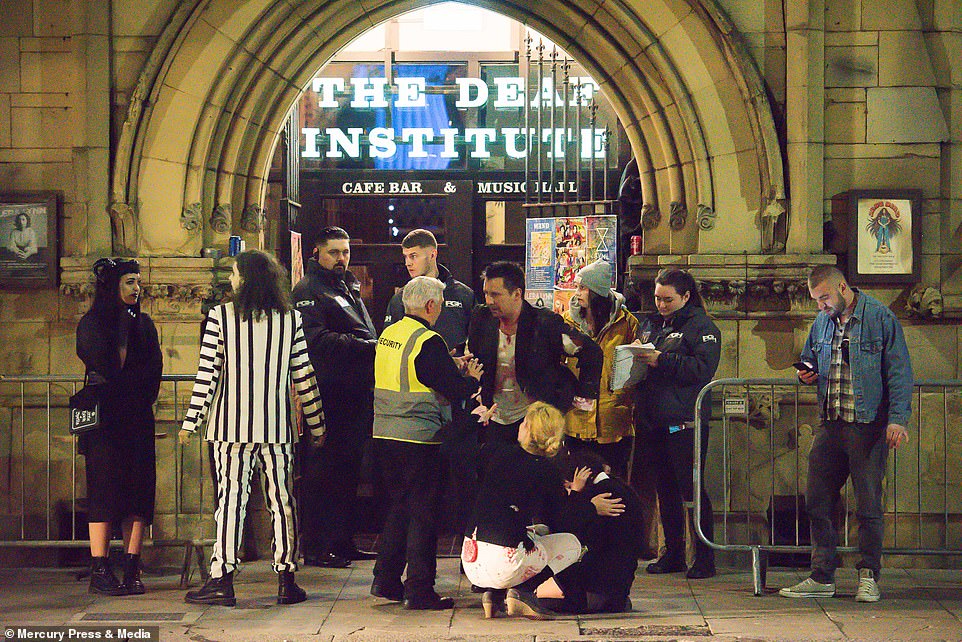 It wasn’t all fun and games for every one last night, as some ended up needing assistance. A woman is pictured here outside The Deaf Institute in Manchester while a man is seen speaking to security outside the venue 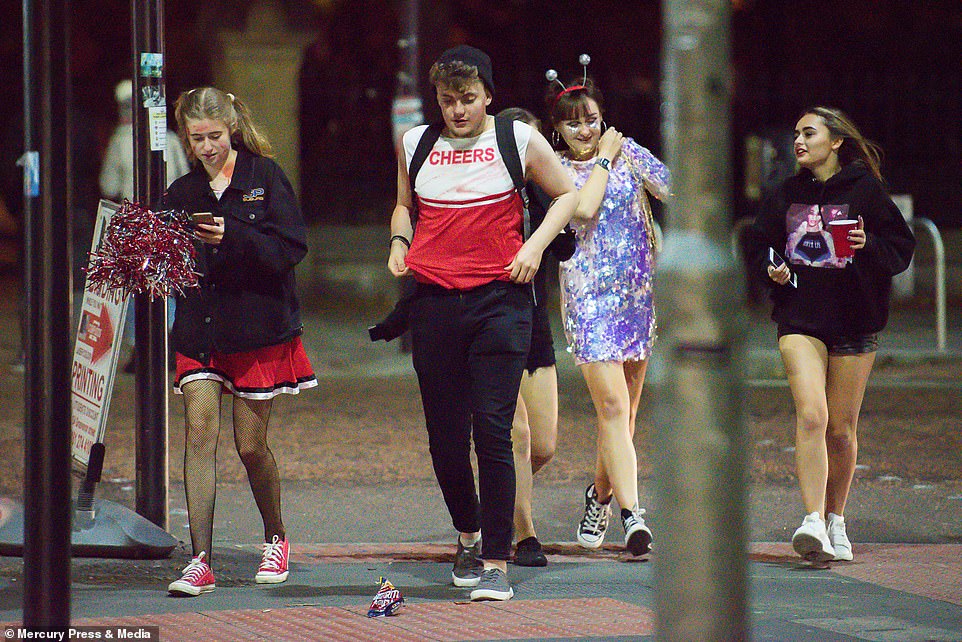 As well as scary ghosts, vampires and clowns there were some dressed up as cheerleaders and others sporting sparkly outfits as hundreds hit the streets of Manchester for an early Halloween celebration 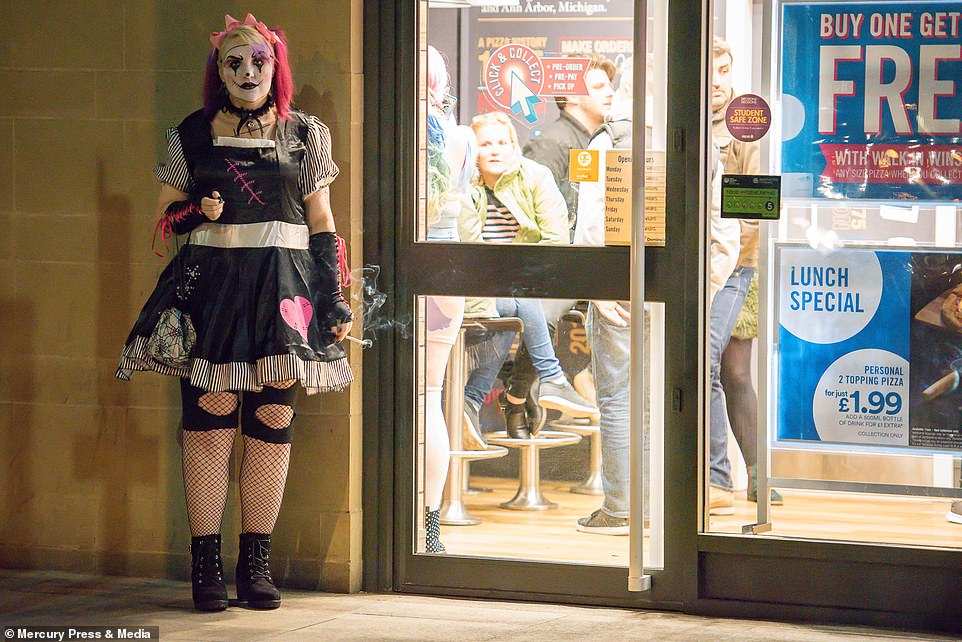 For some, a night out in Manchester ended with a takeaway. Several are seen here inside a Domino’s pizzeria while another is seen outside still sporting her Halloween garb 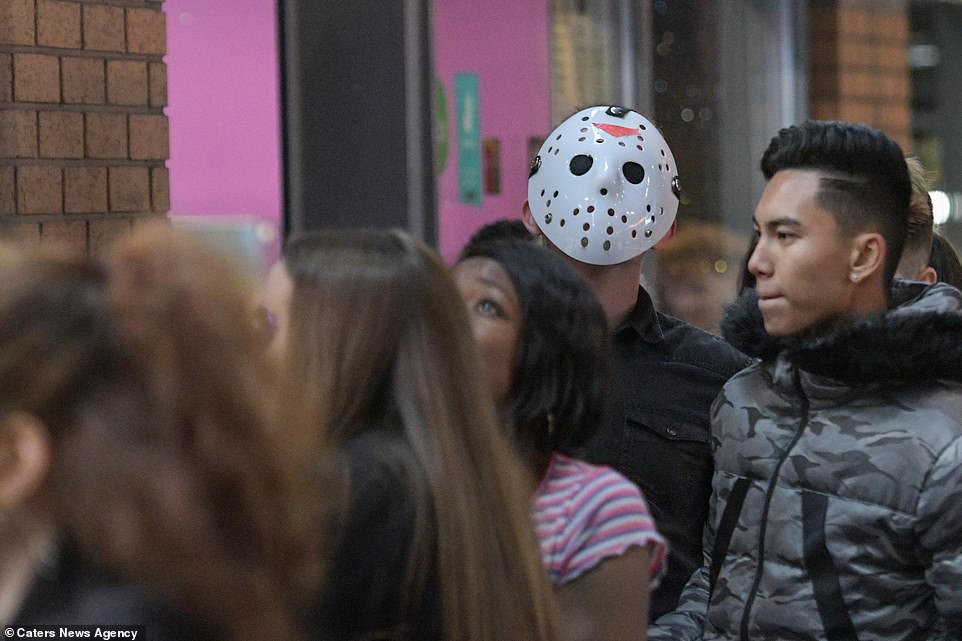 A mask was all this chap needed to put together his spooky outfit for a night out in Birmingham last night. He is seen here queuing alongside dozens of others to get into PRYZM nightclub in the city centre 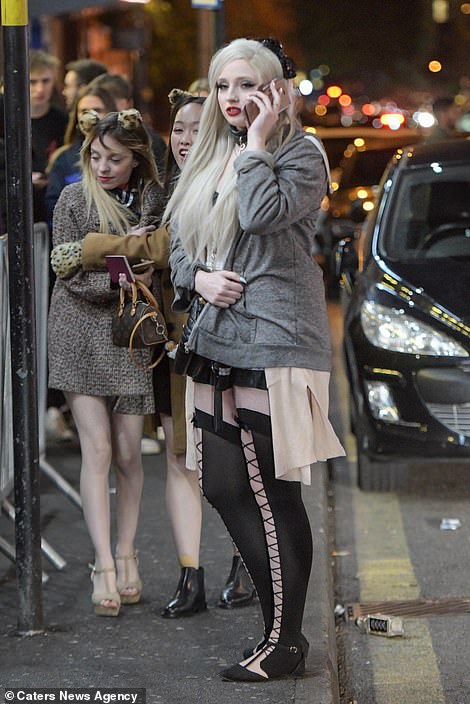 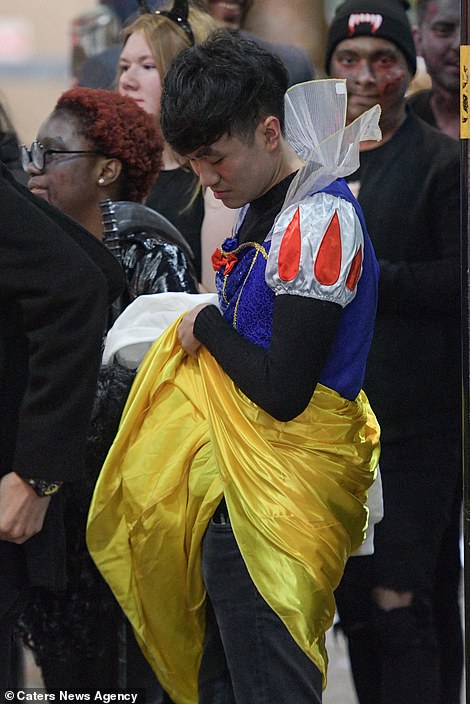 Snow White (right) was one of a number of outfits spotted in Birmingham last night as thousands of revellers hit the streets of the city for an early Halloween celebration. Several night-clubs in the city were offering Halloween themed events and eager party-goers certainly got into the spirit of things (left) 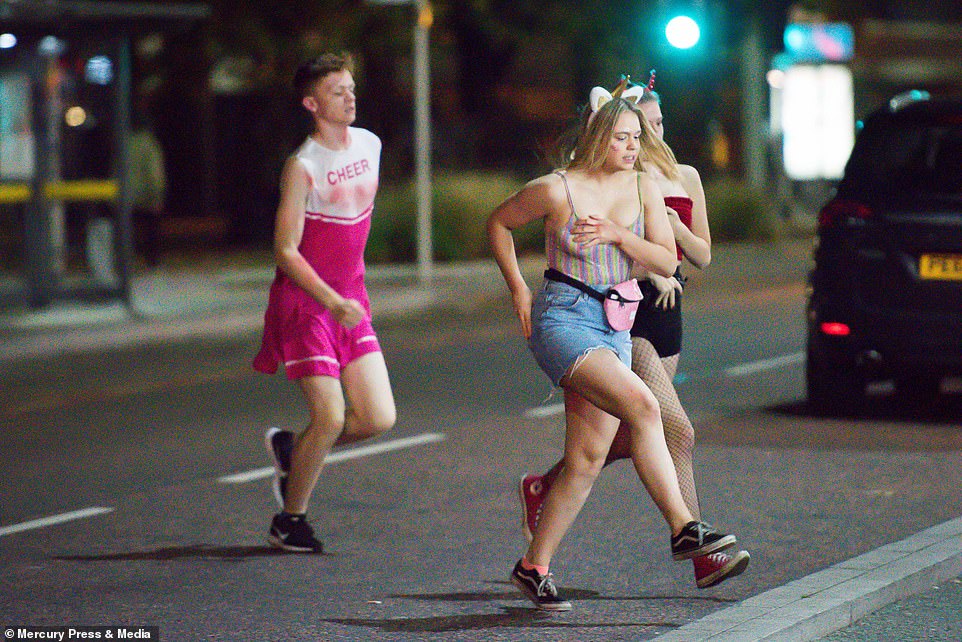 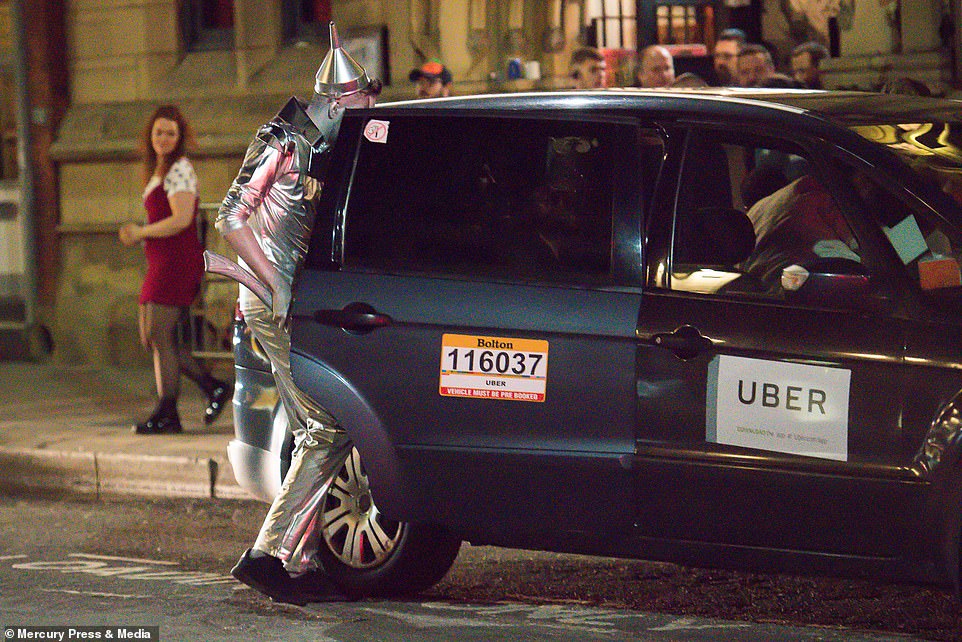 It’s home time for The Tin Man from the Wizard of Oz as he clambers into a taxi in Manchester. It is just one of a number of outfits seen in the city last night as revellers make the most of the run-up to Halloween 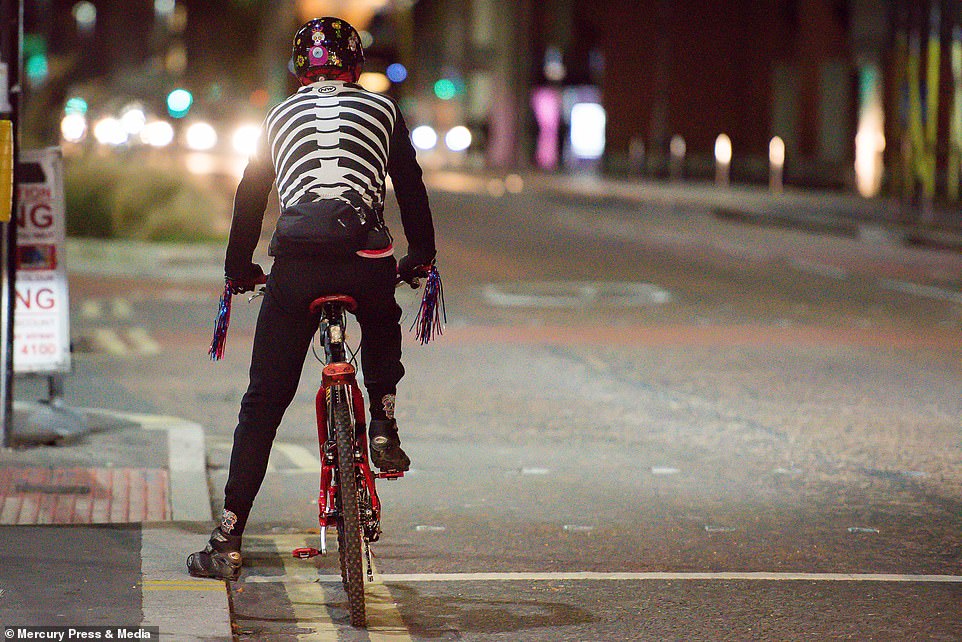 It’s not every day you see a skeleton cycling through the streets of Manchester on a bike with tassels – but last night locals got the opportunity to see that very thing. Sensibly this cyclist also opted for a helmet as part of his Halloween get-up 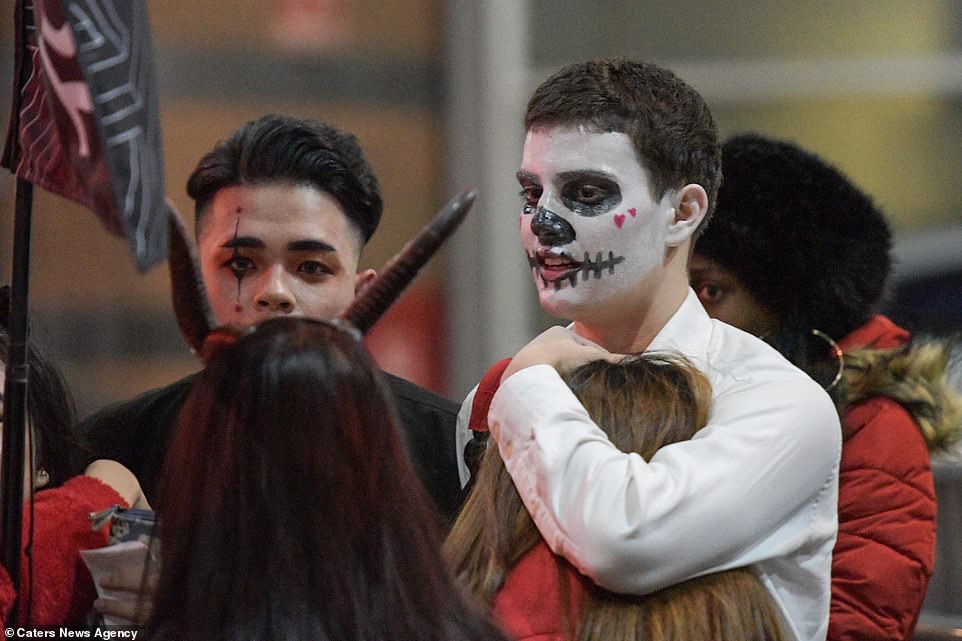 Some people went the extra mile and painted their faces for the occasion – bringing a whole new element to their Halloween costume. Two revellers are seen here in Birmingham city centre last night 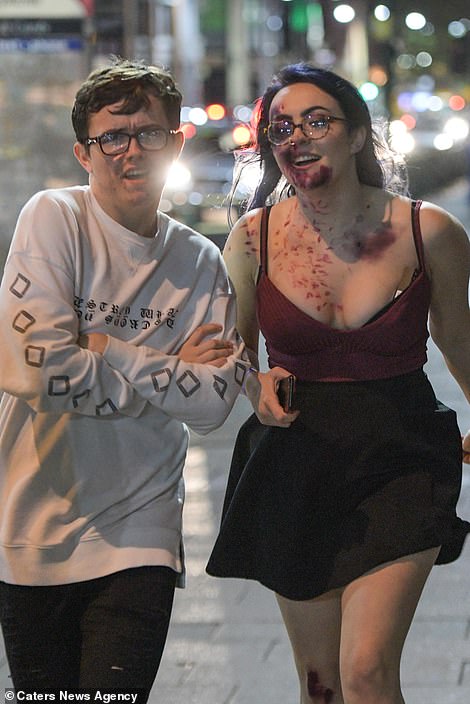 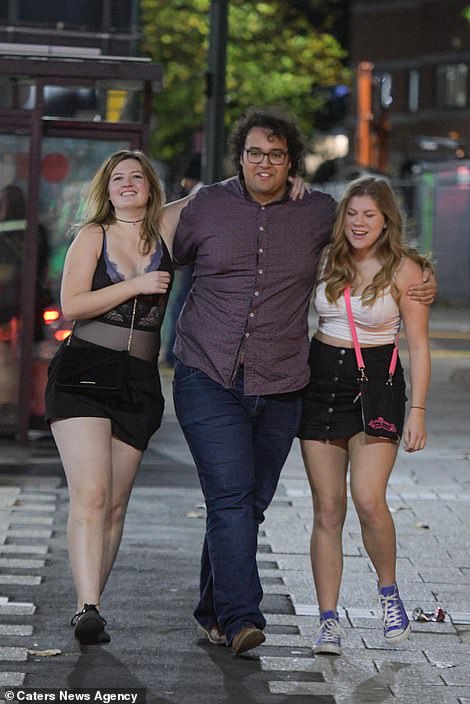 Not everyone decided to dress up in Halloween attire for their night out. Some high-spirited revellers (right) were seen walking through Birmingham city centre last night without any fake blood inside. Unlike others (left), who had decided to use fake blood quite heavily in their outfit 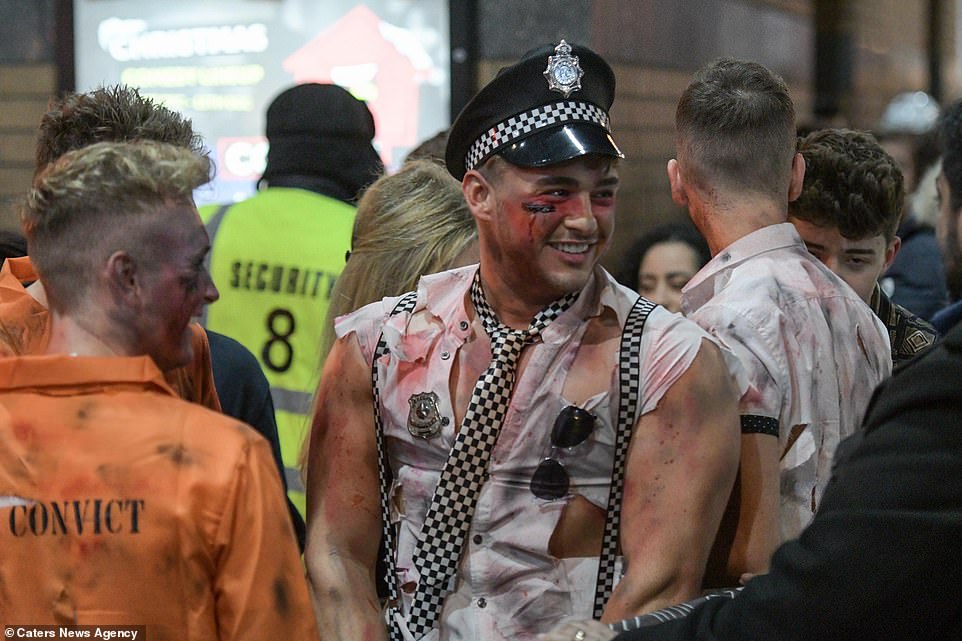 As well as dozens of police on the streets of Birmingham last night, there were also a few unofficial officers (pictured) who had donned the outfit for an early Halloween celebration. Other outfits on show were felons, scarecrows and even cat woman 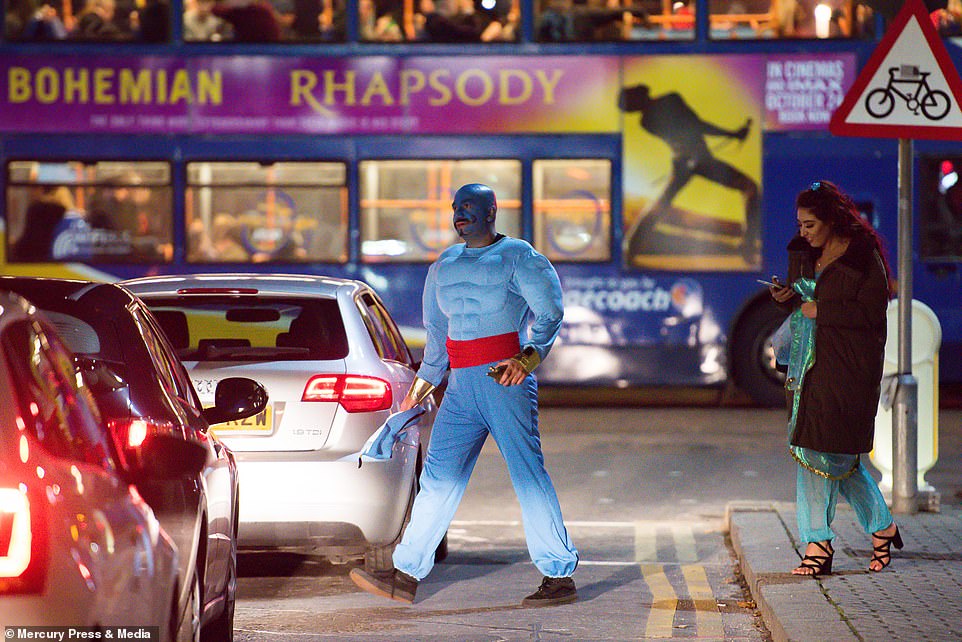