To anyone who remembers Blue Peter’s over-excitable dog Shep in the 1970s, it’ll come as no huge surprise.

But border collies have been revealed as Britain’s most badly-behaved dogs – and most likely to need therapy.

Which is probably why presenter John Noakes’ exasperated refrain ‘Get down, Shep!’ became such a classic catchphrase on the BBC show.

John Noakes, pictured here with Shep in a Blue Peter Annual from 1973. The border collie was renowned for his misbehaviour on the show and Mr Noakes’ classic catchphrase ‘Get down, Shep!’ 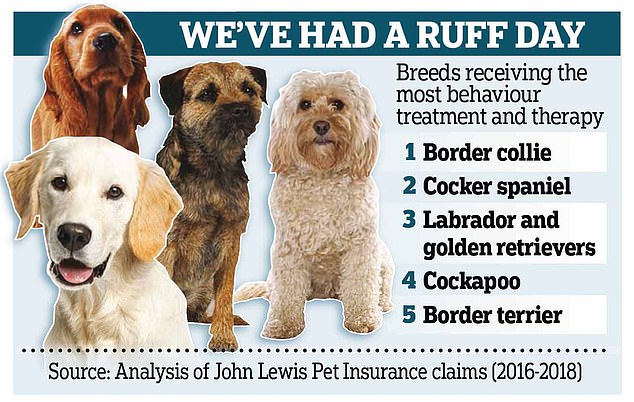 John Lewis conducted research of the five top breeds when it came to claims against pet insurance. The border collie was joined on the list by the cocker spaniel, Labrador, Cockapoo and finally the Border terrier

They appear to be at odds with the idea that the border collie is an acutely intelligent working dog, able to outsmart a truculent herd of sheep with an expert shepherd.

In fact, the breed was developed in the Scottish borders for herding livestock, specifically on the basis that it was both intelligent and obedient.

However, the findings suggest that collies are likely to become frustrated and unruly when they are raised in urban homes without the mental and physical challenges they were bred for.

Just as psychological therapy has become more commonplace in the general population, it is now being offered to pets to improve behaviour.

It is suggested that therapists can diagnose and resolve issues by delving into the psyche of the dogs – and even go back to any trauma they suffered during their puppy years.

A John Lewis spokesman said: ‘Behaviour therapy can be used to treat a range of common conditions including excessive barking, destructive behaviour, aggression towards people or other animals, separation anxiety and fear of people, places and noises.

‘Behaviour therapy typically includes a home consultation where experts investigate the reasons for the behaviour, including delving into their puppy years, environment and lifestyle.

‘They then come up with a therapy treatment plan. This could include training exercises or even props such as CDs and downloads to treat noise phobias, or dog ‘play mats’ and puzzle toys to alleviate boredom in unruly pets.’

Rebecca Cannon, a Veterinary Surgeon for RSA, which underwrites John Lewis Pet Insurance, said: ‘Working dogs such as border collies have been bred to have exceptional herding abilities and are highly intelligent and energetic.

‘But, if they are not given a suitable outlet for these instinctive behaviours or not sufficiently stimulated with regular physical and mental exercise, they can become frustrated, bored or anxious. However, we should be careful not to classify entire breeds as aggressive or hypersensitive because individual dogs can vary enormously, just as people do.’

Meanwhile, dog trainer Jennifer Billot of Bone Ball Bark, who has a Masters degree in canine life sciences, confirmed that poor behaviour can stem from boredom. She recommends taking troubled pets for a swim, play dates with other dogs and using games, such as hiding food, to keep them stimulated.

Other tips include not making a fuss of your pet when leaving the house or returning home – to avoid separation anxiety.

She added: ‘Tell your dog what to do as opposed to what not to do. We can get into the habit of saying “no, no, no” to a lot of their behaviours, without giving them an alternative.’