Border Force has intercepted a boat carrying around eight migrants, including a child, off the Kent coast this morning, to add to a record 336 migrants who arrived in August.

The Home Office said authorities was alerted to a small boat travelling across the Channel close to St Margaret’s Bay, near Dover, at around 6.30am.

Sea conditions are said to have been ‘perfect’ for the latest migrant crossing – with record numbers making it to Britain in recent weeks.

Officers from Kent Police were called out to assist Border Force and the Coastguard, and the asylum seekers are now being checked over by Home Office officials.

A group of seven men and one minor, who presented themselves as Iranian nationals, were subsequently detained in St Margaret’s village.

Hundreds more could come to the UK in the coming weeks after two migrant camps in France were cleared – including one near Dunkirk holding 1,100.

A reported eight migrants were found on a boat in St Margaret’s Bay, in Dover, early this morning 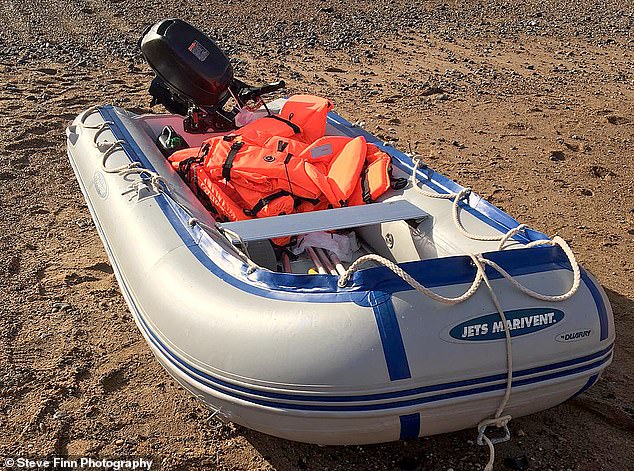 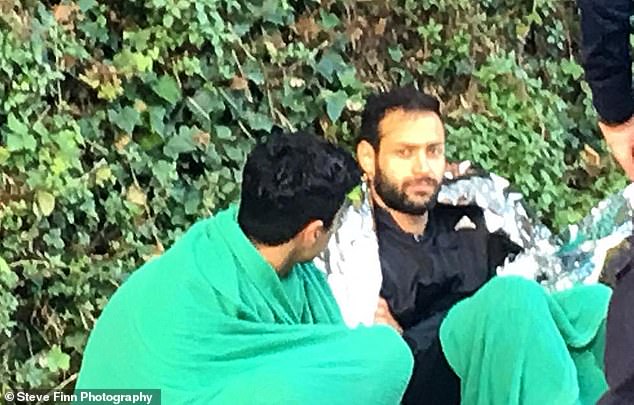 The asylum seekers are now being checked over by Home Office officials in Dover, Kent

The group found this morning were taken to Dover to be medically assessed before being transferred to immigration officials to be interviewed.

A Home Office spokesman said: ‘Crossing the Channel in a small boat is a huge risk.

‘The criminal gangs who perpetuate this are ruthless and do not care about loss of life.

‘We are working closely at all levels with the French authorities to tackle this dangerous and illegal activity.

‘In addition, Border Force cutters are patrolling the Channel and we have deployed equipment to detect migrant activity.

Far-right activists from political group Britain First – including convicted criminal Paul Golding – have sparked outrage after patrolling at a beach near Dover to catch migrants crossing the Channel.

The group said it sent people on the lookout for desperate migrants who risk their lives to get to Britain from France. 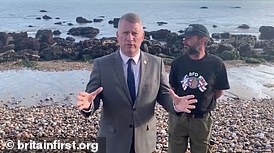 Far-right activists, including convicted criminal Paul Golding (pictured in the suit) have been patrolling a beach in Dover

They shared pictures of their ‘patriot migrant patrol’ at the beach in Dover, in Kent, on its website, saying: ‘Equipped with torches, binoculars and hi-vis jackets, our activists patrolled the beach keeping a close eye out for migrant crossings.’

Charities have criticised the patrols, with Care4Calais saying it was ‘shocked and concerned’ by the search parties, and that they were ‘unsettling.’

‘Last month the Home Secretary and her French counterpart agreed to intensify joint action to tackle small boat crossings in the Channel.

‘This includes drawing up an enhanced action plan to deploy more resources along the French coast to intercept and stop crossings.’

A Kent Police spokesman said: ‘Kent Police was called by HM Coastguard to St Margaret’s Bay at 6.53am on September 19 to reports of a vessel with suspected migrants on board.

‘Officers attended and those from the vessel are now in the care of Home Office officials.’

Last week 400 migrants were cleared from a camp in Calais, just 200 metres from the notorious ‘Jungle Camp’ which had 6,000-odd people living there until it was shut down in 2016.

Charity workers said the clearance could see migrants fall into the clutches of people smugglers, who charge them thousands to cross the Channel.

More than 1,200 have made it into Britain from France this year, shattering the number that crossed last year.

They make life-risking trips across the Dover Strait – one of the world’s busiest shipping lanes – often crammed into small boats.

On Sunday, 41 made it over the Channel, including two men on a kayak and another 24 – including minors – on one boat.

Last month, a record 336 migrants got into Britain, and two people died trying to get over.

The body of a 48-year-old Iraqi man was found on Belgian waters wearing diving fins and plastic bottles attached to him as a makeshift life jacket.

While a woman was discovered on Dutch waters after falling overboard.

The majority of the migrants present themselves as either Iranian or Iraqi nationals, and once they are brought on to land they are screened by Border Force officers.

The crisis took hold in November and has raged on since, despite millions of pounds being spent on security measures including drones.