A Border Force ship patrolling the English Channel has intercepted a stolen French fishing boat with 17 Iranian migrants, including three children, on board.

The fishing boat is thought to have been stolen from the French port of Boulogne late last night and the group jumped on.

UK officials and a lifeboat were alerted and stopped the vessel in rough seas off the coast of Dover.

It is the latest in a series of similar incidents in the English Channel, where migrants are attempting to cross the 21 mile stretch of water between France and Britain.

Ingrid Parrot, a spokesman for maritime authorities in northern France, explained agents monitoring the coastline alerted their British counterparts after seeing a boat that was taking a ‘bizarre’ route between 9.30pm and midnight on Monday.

Officials identified the 12-metre (40-feet) boat and contacted its owner, who said the vessel had been stolen from the port of Boulogne-sur-Mer.

Agents from Britain’s Border Force then intercepted the migrants at around 1am. 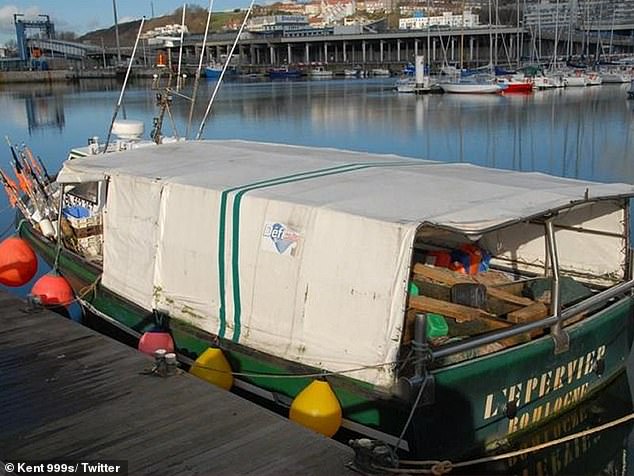 The green and white painted boat was brought into the marina where Border Force officials were waiting to board it.

The vessel, named L’Epervier, The Sparrow Hawk in English, was being looked at by officers at the Marina today.

The group, 14 men and three minors, who all presented themselves as Iranian, are understood to have been ‘extremely cold’ when they were brought ashore.

One boatman, who did not want to be named, said: ‘This situation is happening more and more but this seems like a particularly large incident involving a lot of people.

‘It’s always worrying. They’ve clearly been through a lot to have got this far and only on a small boat. People are concerned for them.

‘You hear of people coming through on lorries through the tunnel but this is rarer. 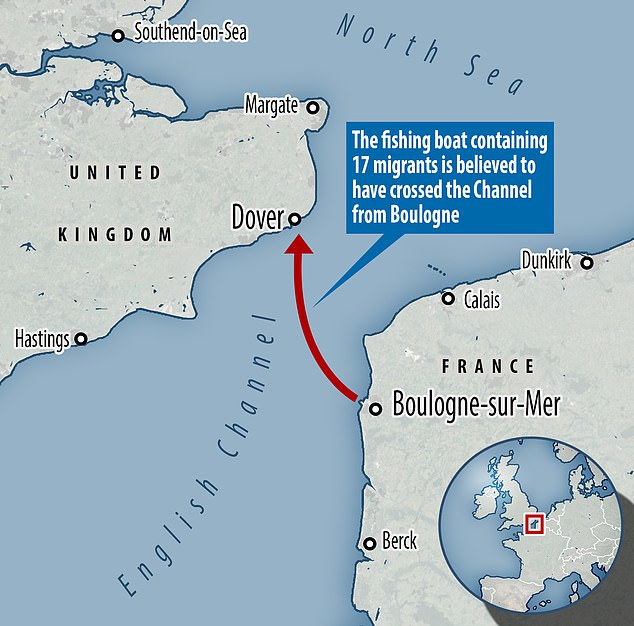 ‘Nobody knows if it will get better or worse as well when Brexit happens. Who knows?’

A Home Office spokesperson said: ‘Border Force attended a report of a fishing vessel at Dover Harbour this morning, Tuesday 13 November, and boarded it with assistance from Dover Harbour Authorities and HM Coastguard.

‘Fourteen men and three minors, all of whom presented themselves as Iranian, were found on board.

‘The Home Office will progress their cases in accordance with the immigration rules and the three minors have been referred to social services.’

French police are investigating the theft of the boat.

Pascal Deborgher, the owner of the stolen fishing boat, said it was taken from its berth on Monday night and he was ‘surprised’ to see it gone.

Mr Deborgher has been mooring the The Sparrow Hawk in Boulogne since the 1980s, where he runs a successful fishery business.

He said: ‘We don’t know if the boat has been damaged or not, when we will be able to recover it or at least see it. For the moment, we are waiting for news of the investigation.’

He said it had not gone out to work on Monday night because of strong winds – leaving the thieves to board and break in. 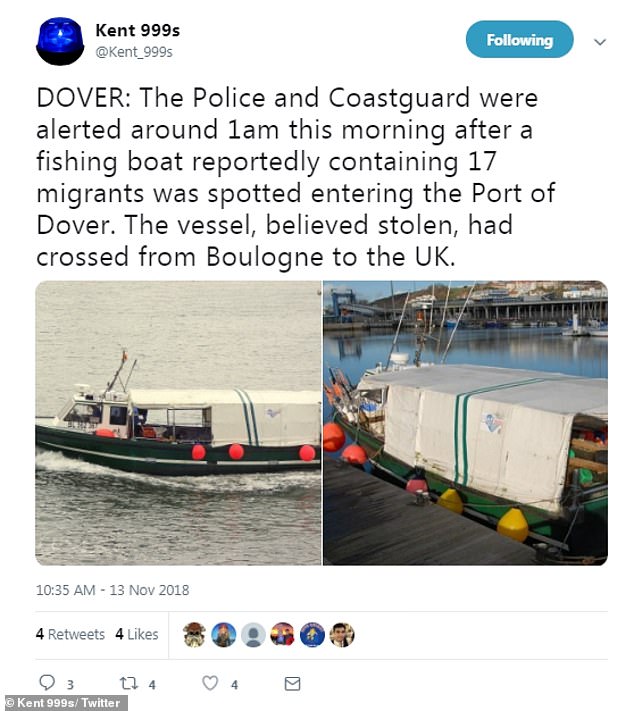 British authorities have not yet to confirmed details of the incident, including the nationality of the migrants

‘I got a call from the authorities to see it had been spotted following an erratic route across the Channel. I went to the harbour and was surprised to see it gone.’

Mr Deborgher told the Voix du Nord newspaper: ‘To run the boat, you need a minimum of knowledge.

‘You have to know how to start it, to follow a course, especially in the middle of the night and when it is low water. But despite this, they got to Britain.

‘If they cannot get through the tunnel or in the trucks, they will steal boats.

‘The temptation is huge when you know that only thirty kilometers separates France and the English coast.

Dover MP Charlie Elphicke said: ‘This brazen attempt to break into Britain shows yet again the extreme lengths these desperate people will go to.

‘This latest incident underlines why we need to significantly boost our borders budget – and increase the number of vessels patrolling the whole border.

‘This is a growing problem – and the Home Office must not turn a blind eye.’

French authorities intercepted migrants in the English Channel 23 times in 2016 and 12 times in 2017.

So far this year French maritime officials have again launched 23 operations, either to rescue migrants in the Channel or to stop groups about to set sail.

In the early hours last Friday, a dinghy with seven Iranian migrants was discovered two miles off the Kent coast at Dover after they dialled 999 for help.

And 15 migrants were discovered in two separate incidents on the same day where a rigid hulled inflatable boat and a dinghy were intercepted.