Borderline ridiculous but fun too: Angel Has Fallen starring Gerard Butler is the best so far

Memo to all writers of action thrillers, particularly ones who might just be putting the final touches to Bond 25 (now to be called No Time To Die, apparently) or Mission: Impossible 7 – I think we may already be at peak drone attack.

I don’t mean the military-grade ones at the centre of films such as Eye In The Sky and Good Kill, I mean the pesky, almost domestic-sized ones that are normally released by the chief baddie, whizz rapidly around like an angry swarm of killer bees and then – thanks to the magic of visual effects – promptly start dispensing murderous mayhem.

They’ve become increasingly ubiquitous. It’s barely two months since they provided the key reveal in Spider-Man: Far From Home, and now they have a pivotal role to play in Gerard Butler’s latest offering, Angel Has Fallen. 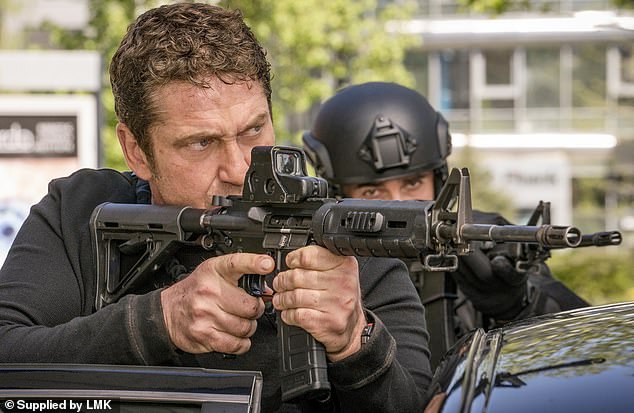 The President of the United States is out enjoying an afternoon of lake fishing when, suddenly, up go the drones – ‘Are they bats?’ wonders a secret service agent who clearly doesn’t get out much.

Down go the President’s security detail in flaming seas of pyrotechnics and the only man mysteriously left standing is Agent Mike Banning. Ooh, that doesn’t sound good.

I groaned at the first sight of multiple drones, but fair dos – these explosive flying machines have facial recognition programmed into their internal weaponry (the old cliché about a bomb only being dangerous ‘if it has your name written on it’ has been seriously upgraded), which lends them a bang up-to-date topicality. 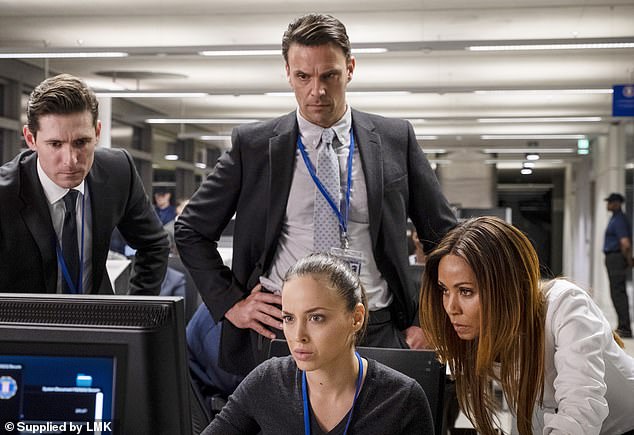 This turns out to be the best so far. The supporting cast, led by Jada Pinkett Smith (above, bottom right) and a fabulously game Nick Nolte, is undoubtedly the strongest yet

And besides, I didn’t expect much more from the underwhelming franchise that began life with the disappointing Olympus Has Fallen in 2013, continued with the risible London Has Fallen in 2016, and now returns to the US for this one.

This, however, much to my surprise, turns out to be the best so far. Yes, the climactic shoot-out goes on seemingly for ever, and some of the dialogue is laughably poor, but the visual effects have been significantly improved, there’s topical talk of Russian collusion, and the supporting cast, led by Jada Pinkett Smith and a fabulously game Nick Nolte, is undoubtedly the strongest yet.

Overall that’s still not saying a lot, but for Butler, who once again stars and co-produces, it’s definitely got to go down as progress. 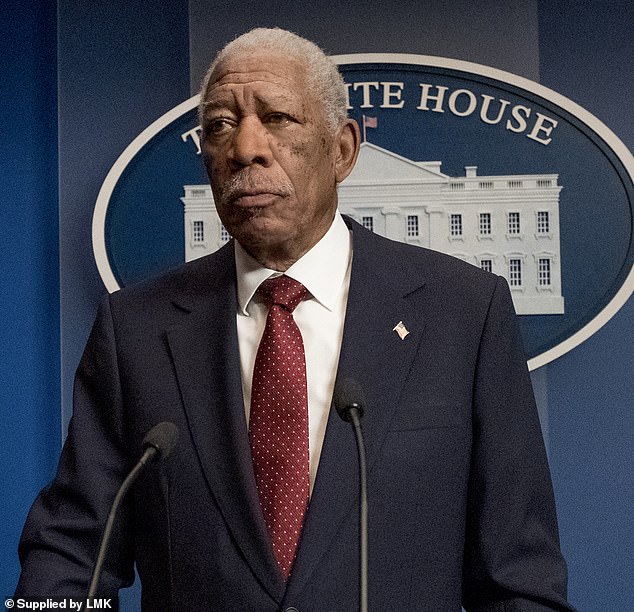 How nice to see Morgan Freeman (above), who began the franchise as merely Speaker of the House, finally making it to the top job as the liberal President Trumbull

Having seen off the North Koreans in the first film and Middle Eastern terrorists in the second, this time around, following the assassination attempt, it’s very much a case of the enemy within.

But first, Banning – ageing, addicted to painkillers and suffering from headaches and dizzy spells – must prove his innocence. Which, given that he’s got the uncompromising Agent Thompson (Pinkett Smith), half the FBI and assorted vigilante groups after him, is not going to be easy.

But hey, he’s Mike Banning, and stuntman-turned-director Ric Roman Waugh has two hours to fill – ‘not easy’ is what they do.

Gerard Butler was awarded a certificate of bravery by the Royal Humane Society in 1997 after rescuing a drowning boy from the River Tay.

There’s a certain 39 Steps/Rogue Male/The Fugitive-like quality to proceedings, while Banning attempts to stay one limping step ahead of his pursuers, particularly as he holes up with the grizzled old backwoods man who not only turns out to be a Vietnam veteran but someone Mike has definitely seen before.

Oh, and did I mention that Clay (Nolte) is also an explosives expert? What ensues is borderline ridiculous but fun too.

Nolte comes close to stealing the film, but there’s unexpected quality right across the board – from Danny Huston as Mike’s old army buddy, Wade, to Tim Blake Nelson as Vice President Kirby.

And how nice to see Morgan Freeman, who began the franchise as merely Speaker of the House, finally making it to the top job as the liberal President Trumbull. Surely no one could wish a politician like that ill. Just no more drones, OK?

By tradition, every summer at the cinema must feature at least one terrifying movie involving a toothy, water-dwelling predator. This year it’s alligators. Very large, very hungry alligators…

To be honest, I found the combination of roaring reptiles (do alligators really roar?), a partially flooded sub-basement and some seriously nasty injuries a bit too much. But even through my fingers I could see that former Skins star Kaya Scodelario is very good as the Florida-based university swimmer who unwisely goes looking for her missing dad (Barry Pepper) as a hurricane closes in.

And yes, she does find him in the basement and, no, he’s definitely not alone.

The films of Spanish director Pedro Almodóvar used to be all about colour, life and excitement. These days, with the great man due to turn 70 next month, they come with a more melancholy and reflective air, as his latest, personal offering shows.

An on-form Antonio Banderas (he won Best Actor at Cannes this year) plays Salvador Mallo, a once-successful film director who, hampered by chronic ill-health, now lives as a semi-recluse.

It’s the sort of life that leaves him plenty of time for remembering his childhood, his mother (Penélope Cruz), his religious education… 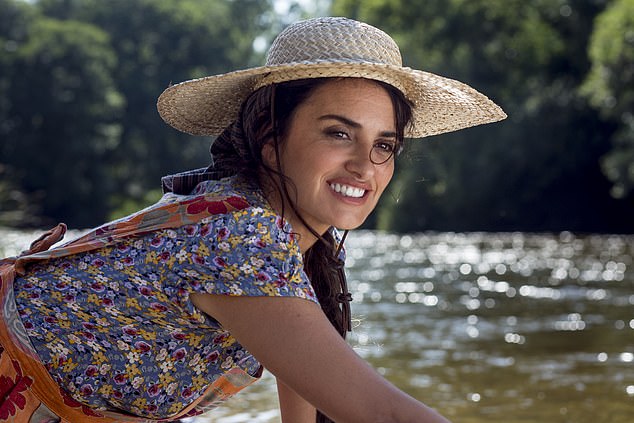 An on-form Antonio Banderas plays the once-successful film director, Salvador Mallo. Living as a semi-recluse he remembers his childhood and his mother (Penélope Cruz, above)

But he hasn’t totally forgotten past glories, venturing out one day to reconnect with an actor he fell out with decades ago. What eventually results is a little slow and over-extended but also thoughtful, beautifully shot and rather touching.

Scary Stories To Tell In The Dark (15)

Local Mill Valley legend tells of a haunted house and of Sarah Bellows, a sick young woman who wrote stories so terrifying they would scare children literally to death. Fast-forward to 1968, when teenagers find Sarah’s long-missing book and, guess what? 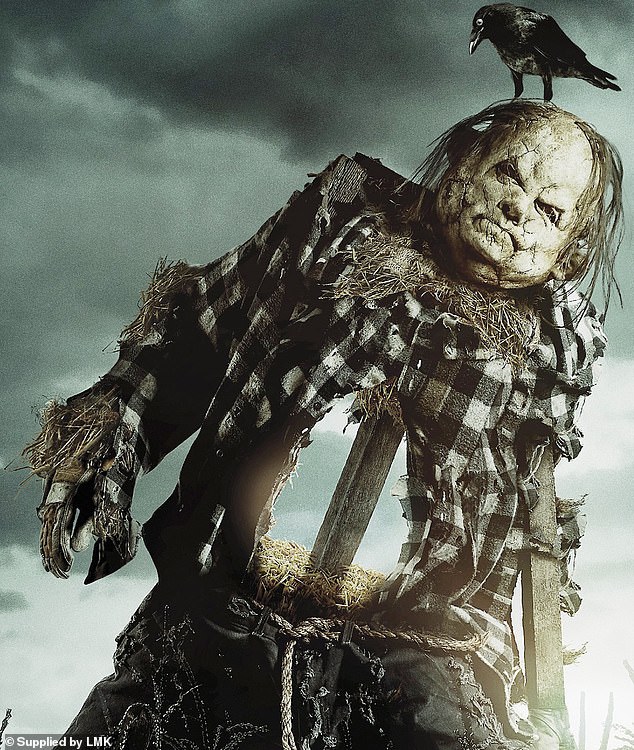 Local Mill Valley legend tells of a haunted house and of Sarah Bellows, a sick young woman who wrote stories so terrifying they would scare children literally to death

She’s still writing stories and it’s all happening again! The result is slow, and neither clever nor scary.