Boris Becker’s estranged wife reportedly made a barbed Instagram post on the day the warring couple came head to head in court.

The former tennis star, 50, and his Dutch model wife Lilly Kerssenberg, 42, are currently locked in a court battle over the terms of their split.

On the day of a court appearance in London earlier this week, both of them posted barbed comments on their social media accounts. 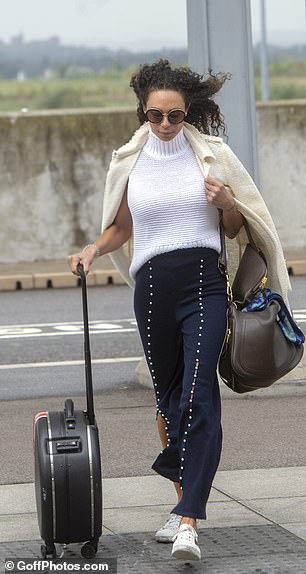 Lilly Kerssenberg, formerly Mrs Becker, was seen leaving at Heathrow Airport today after aiming a barbed comment at her husband as they battle over the terms of their split 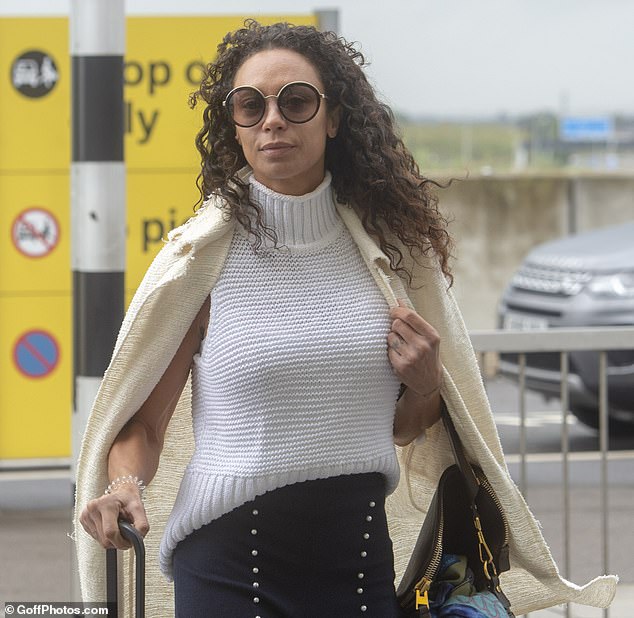 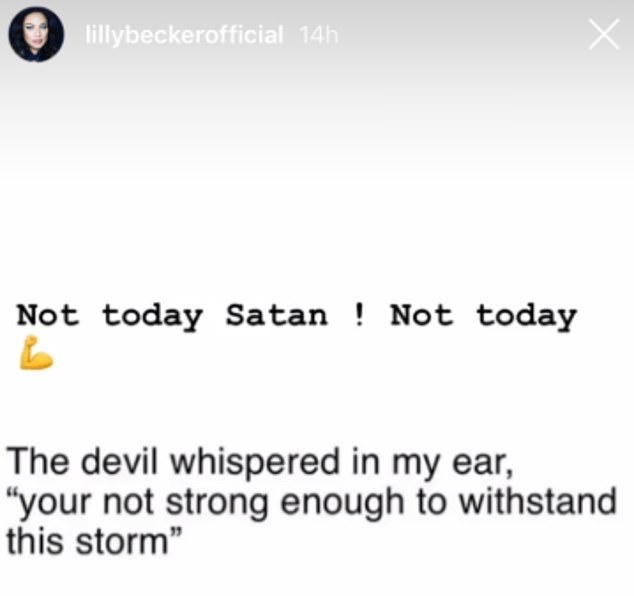 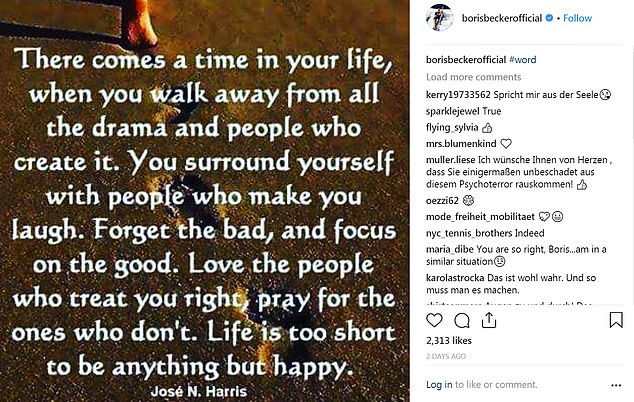 Becker posted this message on Instagram, saying: ‘There comes a time in your life when you walk away from all the drama and people who create it’

Ms Kerssenberg posted: ‘Not today, Satan not today. The Devil whispered in my ear: “You’re not strong enough to withstand this storm”. I whispered back: “It’s you that isn’t strong enough”.’

Dutch-born Ms Kerssenberg is apparently leaving the country, as she was seen walking through London’s Heathrow Airport today.

Becker – whose lawyer previously claimed the split is ‘amicable’ – posted: ‘There comes a time in your life when you walk away from all the drama and people who create it.

‘You surround yourself with people who make you laugh. Forget the bad and focus on the good. Love the people who treat you right, pray for the ones who don’t. Life is too short to be anything by happy.’

The 50-year-old former tennis star announced in May this year that he and Lilly had separated after 13 years together. 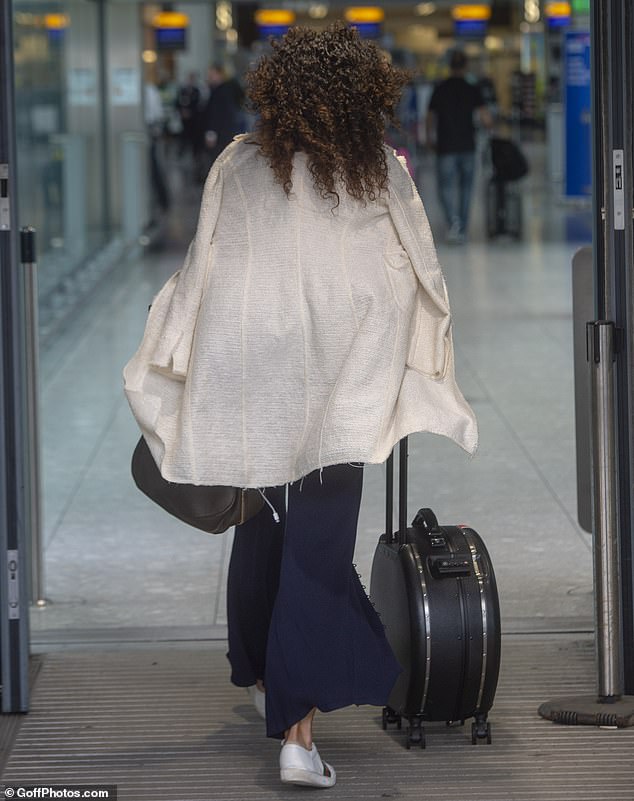 It came after Becker was declared bankrupt last year when it emerged he had racked up a debt of £3.3million with a private bank.

Becker was then involved in a bizarre row over whether a diplomatic passport he had been issued by the Central African Republic entitled him to immunity from bankruptcy proceedings.

The tennis star came to fight his latest battle at London’s Central Family Court on Wednesday, as he and Lilly attempt to settle disputes over arrangements for the split.

Becker looked pensive as he arrived and left the courtroom, while Lilly, who arrived separately, smiled as she chatted to one of her legal team.

It was previously reported that Lilly had instructed respected law firm Grosvenor Law to represent her amid concerns about her future financial situation.

Announcing the couple’s decision in May, lawyer Christian-Oliver Moser said: ‘The decision after a 13-year-long relationship and nine years of marriage wasn’t an easy one.’ 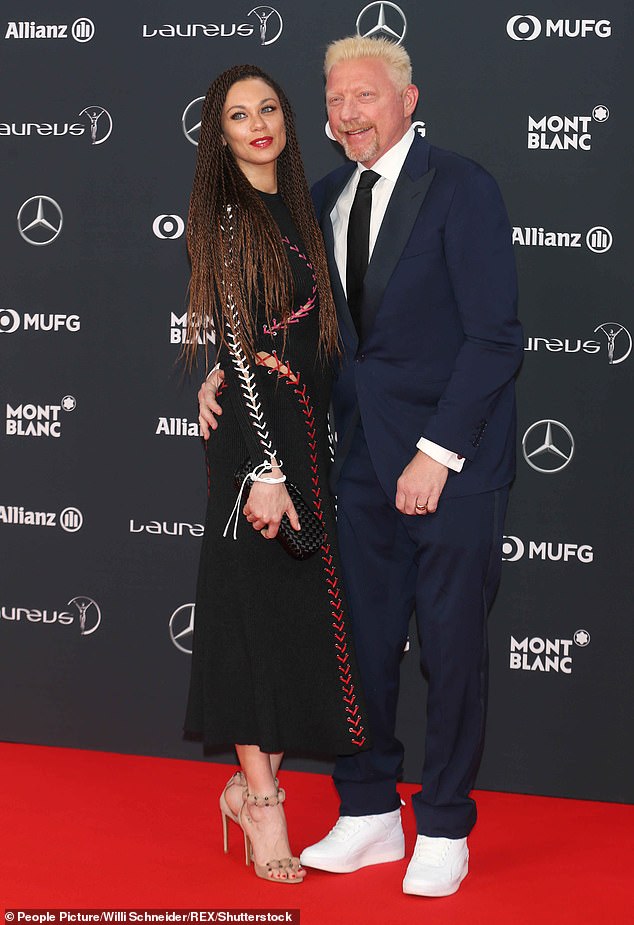 Father-of-four Boris wed his Dutch second wife in Switzerland in 2009. They are pictured in Monte Carlo earlier this year 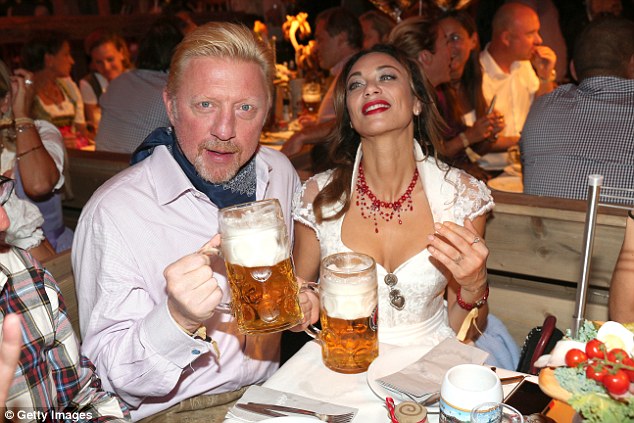 The couple, pictured at Oktoberfest in Munich in 2016, previously said their split is ‘amicable’

Moser insisted that the separation was ‘amicable’, but it is understood the pair have been living apart, and Lilly has moved out of the former marital home in London.

At the end of July, she was seen moving her stuff out of the £5million mansion.

Reflecting on their woes, Lilly told The Daily Mail’s Richard Eden in March that they had previously gone for relationship therapy to save their nine-year union.

She continued: ‘We did couples’ therapy. It was something we never thought we would have to do. It helped. We did an hour a day for five days a week.

‘It was nice to have the input from someone on the outside who doesn’t know you and isn’t biased.

‘If you go through a really s****y time, I’m convinced you have to go through it in your way and hit rock bottom before you can come back. That’s what happened to me.’

Becker was appointed attache to the European Union on sporting, cultural and humanitarian affairs by the Central African Republic in April.

His lawyers told a court in London in June that the position was covered by the 1961 Vienna Convention on Diplomatic Relations and meant he could not be subjected to any legal proceedings without the consent of Foreign Secretary Boris Johnson and his counterpart in Bangui.

He was declared bankrupt in June 2017 by Registrar Christine Derrett, who recalled watching him play on Centre Court.

The bankruptcy was due to be discharged but Becker’s lawyers told the court he agreed to the suspension of the discharge so the issue of his diplomatic immunity could be investigated further.

Becker had to pay his previous wife, actress and designer Barbara Feltus, £11 million when they divorced in 2001 after an eight-year marriage. He also had to give Barbara their Florida apartment.