Boris Berezovsky was killed when he decided to return to Russia

A Russian oligarch found dead in his Berkshire home five years ago, was killed by British intelligence because of his involvement in the 2006 murder of an ex-KGB spy,  Moscow’s top prosecutor has claimed.

Boris Berezovsky, an outspoken Putin critic and former Moscow official, died in 2013, having fled to the UK in the early 2000s and escaped Russian jail after obtaining political asylum.

Prosecutor General Yury Chaika told Russian Parliament that he believes Berezovsky was involved in the plot to kill Aleksandr Litvinenko – and murdered by Britain when he wanted to return to Russia in 2013.

Bold words: Prosecutor General Yury Chaika says he believes Boris Berezovsky, pictured, was killed by British intelligence because he was involved in the death of Aleksandr Litvinenko.

Litvinenko, a former Russian spy and friend of Berezovsky who was also living in exile in the UK, died in 2006 after being poisoned with radioactive polonium.

Chaika claimed Berezovsky was involved in Litvinenko’s death, and that it had been organised by British intelligence in order to accuse Russia of murdering dissidents.

‘The highest concentration of polonium was found in Berezovsky’s office, but Berezovsky could not get polonium on his own,’ he told MPs according to RT.

‘Neither could he fabricate such a trace of evidence. He was acting under control of the British intelligence services, acted together with them,’ the Russian official said.

‘When he decided to return to Russia, they could not allow that a person with access to secrets about radioactive terrorism did so.’ 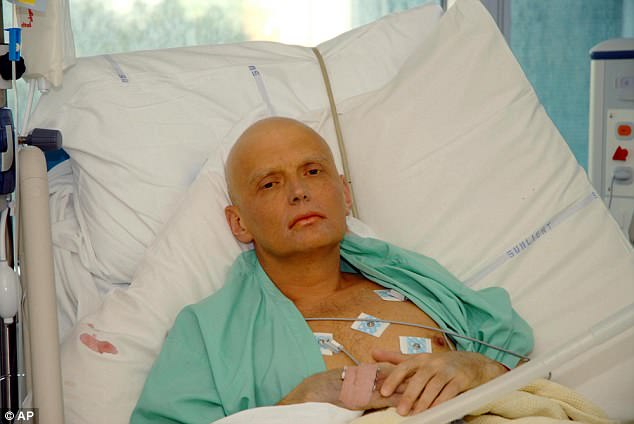 Beresovsky was a friend of Litvinenko, seen here attending a service marking five years since the death of the former KGB spy in 2011 with Litvinenko’s widow and son

This echoes comments made last week by Chaika’s deputy, who accused Britain of withholding evidence in the Berezovsky case in order to cover up their involvement.

Saak Karapetian cited the 2013 inquiry where a coroner concluded it was impossible to say whether Berezovsky’s death was suicide or a slaying.

Mr Karapetian insinuated that Berezovsky was killed because he would have been arrested upon return to Russia.

‘People who faced Russian criminal charges were used as targets… helping create a semblance of motive for their physical elimination.’ Accusations: Chaika said UK spies could not allow Beresovsky to return to Russia

He added that the refusal by British officials to cooperate with Russia or publicly share any evidence in their secret probes was ‘excluding any possibility of their objective assessment.’

Berezovsky, who had made his fortune during the privatisation of state Soviet assets in the 90s, fled to Britain in 2001.

He was convicted of embezzlement in absentia, but was granted political asylum in Britain in 2003, and Russia’s extradition request refused.

He was found dead with a ligature around his neck at his ex-wife’s £20million home in Ascot in Berkshire in March, 2013.

His death has been shrouded in mystery, with his family saying he would not have killed himself and the coroner recording an open verdict.

His daughter has claimed the Russian government could be responsible for his death.

However, friends of Berezovsky has said he had planned to hand over evidence to President Vladimir Putin of a plot by oligarchs to topple him, and that Western secret services linked to the plan to overthrow the Kremlin leader killed him.