The PM told the Commons he was determined to improve services after official data showed only 81.4 per cent of emergency patients were seen within four hours in November.

That was the worst performance ever against the target that 95 per cent of A&E patients should be seen and treated, discharged or admitted to hospital within that timescale.

But in a round of interviews, Health Secretary Matt Hancock suggested the measure will be scrapped, complaining that it does not reflect the true performance of the NHS.

NHS England was already piloting new targets so patients with the most serious conditions receive treatment within an hour while others with more minor complaints wait longer.

Boris Johnson told the Commons he was determined to improve services after official data showed only 81.4 per cent of emergency patients were seen within four hours in November Mr Hancock suggested the trials could become permanent across the country when he was questioned about the NHS’s performance under the Tories.

‘We will be judged by the right targets,’ he told BBC Radio 5 Live. ‘Targets have to be clinically appropriate.’

He continued: ‘The four-hour target in A&E – which is often taken as the top way of measuring what’s going on in hospitals – the problem with that target is that, increasingly, people can be treated on the day and able to go home.

Mr Johnson was challenged on the missed A&E target by Jeremy Corbyn at PMQs.

The premier said the delays that people were facing are ‘unacceptable’. ‘That is why this government is investing record sums in the NHS,’ Mr Johnson said.

The official figures today also showed that more people than ever are on waiting lists for treatment.

NHS England faced allegations of trying to abandon key targets because they cannot be met when pilots were announced in March.

The Royal College of Emergency Medicine warned that scrapping the four-hour target, which has not been met since July 2015, would have a ‘a near-catastrophic impact on patient safety’. 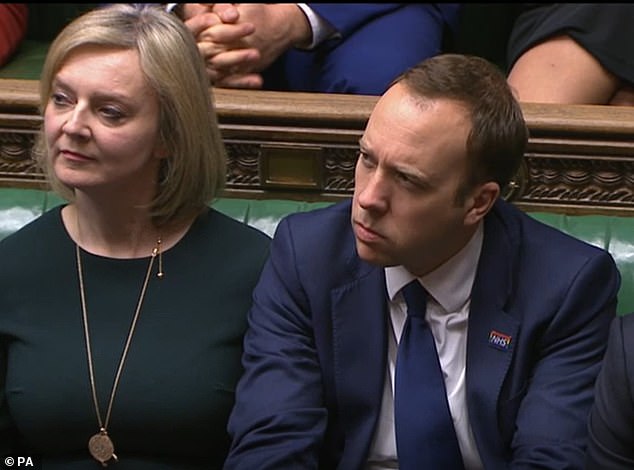 Health Secretary Matt Hancock (pictured at PMQs today) suggested the A&E measure will be scrapped, complaining that it does not reflect the true performance of the NHS