Boris Johnson kicked off his first G7 summit by igniting a war of words with Donald Tusk after the European Council president warned the Prime Minister against going down in history as the man who took the UK out of the EU without an agreement.

Mr Tusk said when he arrived in Biarritz for the three day gathering of the leaders of the wealthiest nations in the world that he would not ‘co-operate on No Deal’.

He suggested Mr Johnson should do everything he can to prevent becoming known as ‘Mr No Deal’.

But the PM hit back hard, telling reporters on the flight to the French coastal town that it was Mr Tusk who risked becoming known as ‘Mr No Deal’.

‘If Donald Tusk doesn’t want to go down as Mr No Deal Brexit then I hope that point should be born in mind by him too.’

The war of words erupted as Mr Johnson prepared for his first head to head meeting with US President Donald Trump tomorrow morning.

Their meeting is expected to dominate the summit with the PM expected to use the sit down to tell Mr Trump that the NHS must be ‘off the table’ in any transatlantic post-Brexit trade deal.

Mr Johnson and Mr Trump have laid the groundwork for a strong friendship since the former took office in July.

But the breakfast meeting is unlikely to be plain sailing for Mr Johnson with clashes likely on a number of issues including whether Russia should be readmitted to the G7 – something Mr Trump supports.

Mr Johnson will meet Mr Trump just hours before a showdown with Mr Tusk when he will urge his European counterpart to reopen Brexit talks after Emmanuel Macron and Angela Merkel said the UK should have 30 days in which to come forward with alternatives to the controversial Irish border backstop.

But today’s clash between the two men suggests their meeting will be anything but straightforward.

Mr Johnson will kick off a series of meetings with world leaders this afternoon as he meets with Canadian prime minister Justin Trudeau.

Mr Macron, the French president, said he wants the summit to focus on addressing environmental challenges and climate change with leaders expected to discuss the Amazon rainforest fires. 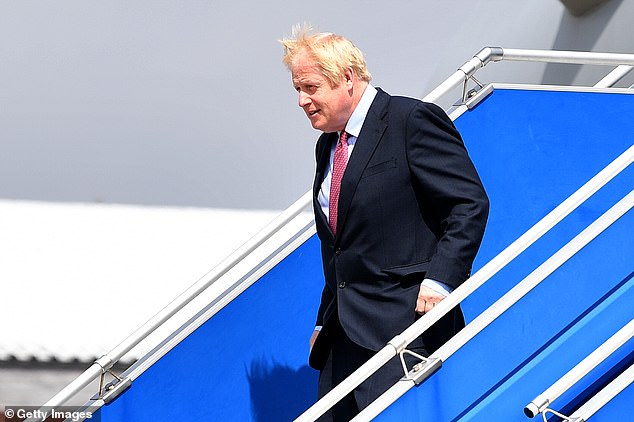 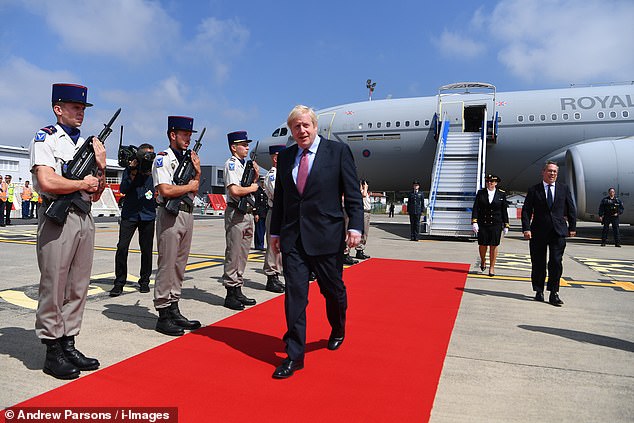 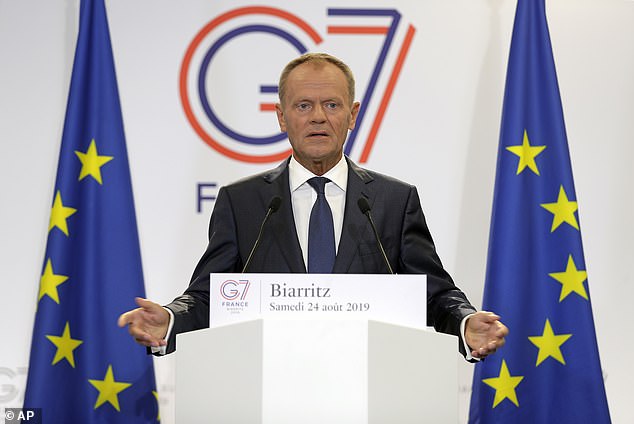 Mr Tusk, pictured today in Biarritz, also warned Mr Johnson he will not help deliver a No Deal Brexit

Mr Tusk set the scene for a tense meeting with Mr Johnson as the former Polish prime minister said he hoped the British premier would not go down in history as ‘Mr No Deal’.

‘He will be the third British Conservative prime minister with whom I will discuss Brexit,’ Mr Tusk said.

‘The EU was always open to co-operation when David Cameron wanted to avoid Brexit, when Theresa May wanted to avoid a No Deal Brexit, and we will also be ready now to hold serious talks with Prime Minister Johnson.

‘One thing I will not co-operate on is No Deal. I still hope that Prime Minster Johnson will not like to go down in history as ‘Mr No Deal’.

‘We are willing to listen to ideas that are operational, realistic and acceptable to all member states including Ireland, if and when the UK Government is ready to put them on the table.’

Mr Tusk’s last sentence will boost optimism that a fresh deal could yet be done to avoid the UK leaving the EU without an agreement on October 31.

But his vehement opposition to a No Deal split will put him on a collision course with Mr Johnson who has repeatedly promised to deliver Brexit with or without a deal by the Halloween deadline.

Mr Johnson will be hoping that Mr Tusk will follow Mr Macron’s and Ms Merkel’s lead after they both signalled a willingness to ditch the backstop if the UK can provide a practical replacement.

However, the EU is deeply sceptical that Britian will be able to come up with anything good enough to allow the border insurance policy to be scrapped.

The backstop was inserted in the original Withdrawal Agreement to ensure there is no return to a hard border on the island of Ireland in the event Brussels and Britain cannot agree terms on a future trading relationship.

‘We will have to work very hard to get this thing done.’ 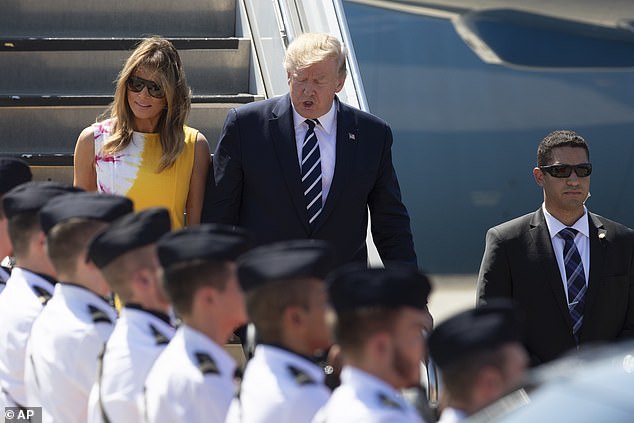 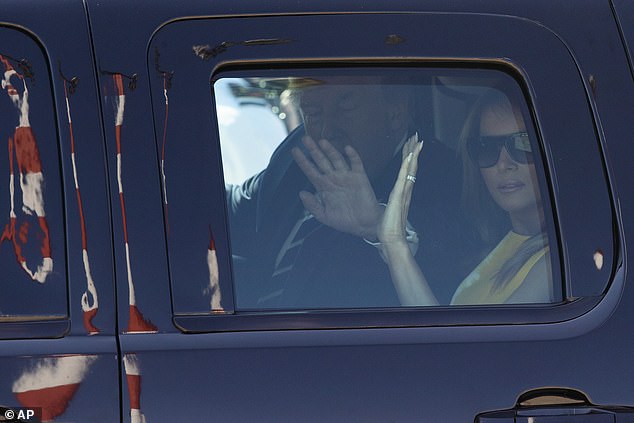 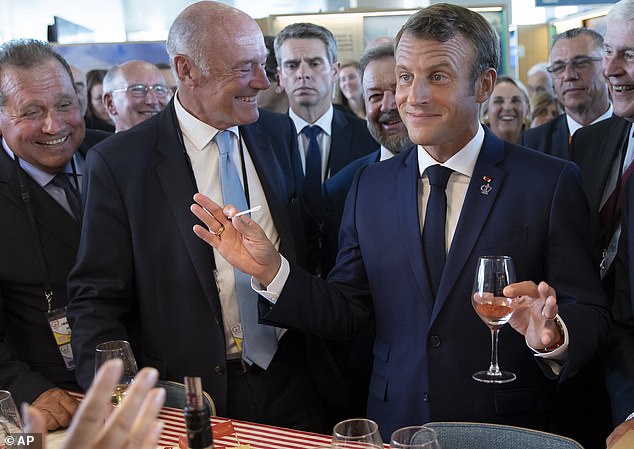 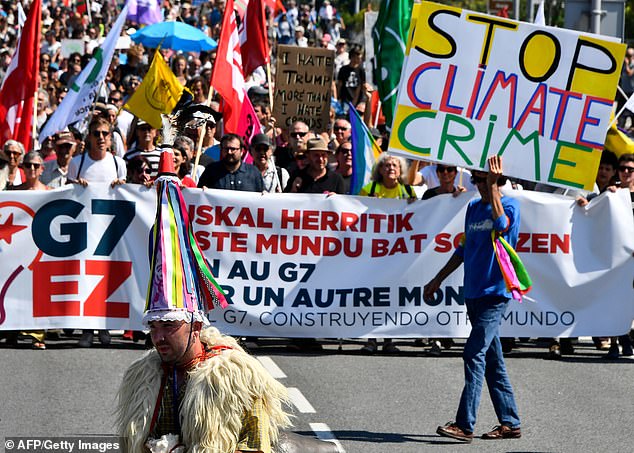 Climate change protesters demonstrated against the G7 as they marched in Hendaye, south west France today

Before setting off for the G7, Mr Johnson warned his Brexit critics that Britain will not be retreating from the world stage after it has left the EU.

He said: ‘Some people question the democratic decision this country has made, fearing that we will retreat from the world. Some think Britain’s best days are behind us.

‘To those people I say: you are gravely mistaken.’

He added: ‘We will stand up for liberty, democracy, the rule of law, equality and human rights — the ideals that we share with our friends and allies.

‘We will remain at the heart of the alliances that span the world. And we will continue to use the breadth of our expertise in diplomacy, defence and development to uphold and safeguard the global order on which peace and prosperity depends.’

His comments will be seen as a rebuke to Mr Macron who suggested earlier this week before the pair met in Paris that a post-Brexit trade deal with the US could see Britain as a ‘junior partner’ in a position of ‘historic vassalisation’.

Mr Johnson will meet the US president – who has repeatedly praised his leadership qualities – early on Sunday morning.

The pair spoke on the phone on Friday evening ahead of their meeting, their fourth official phone call since Mr Johnson took office a month ago and the second call this week. 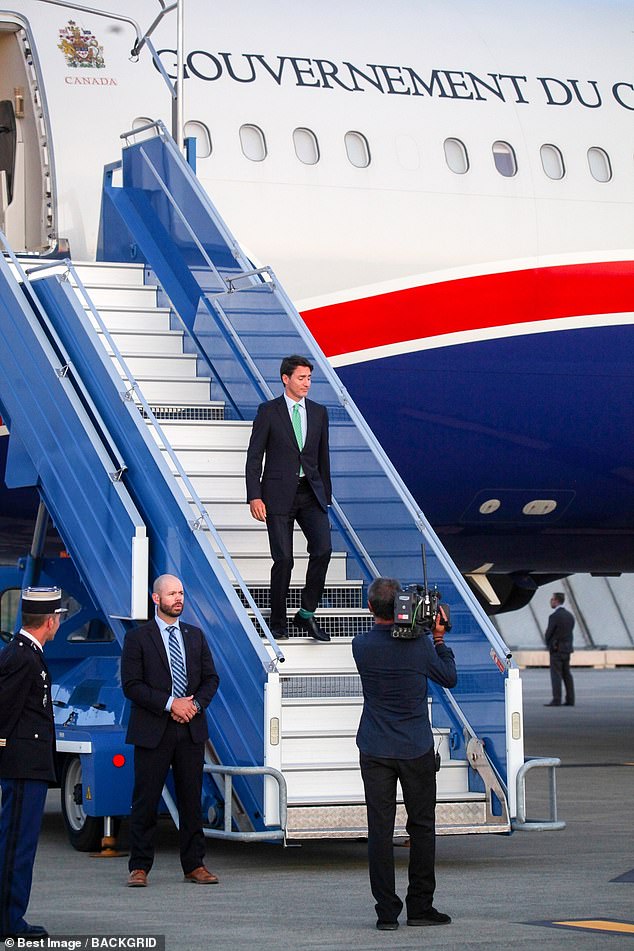 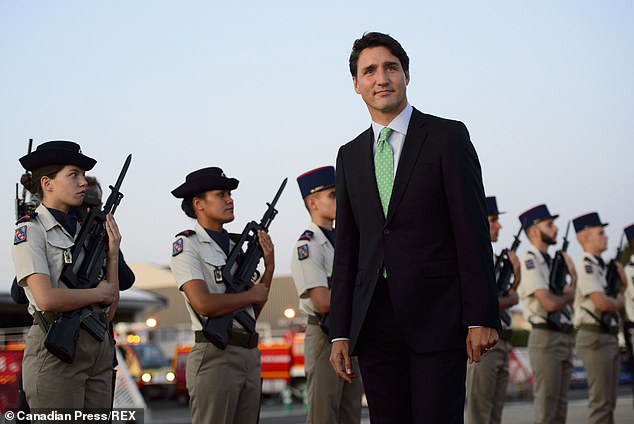 Mr Trudeau will be the first world leader Mr Johnson will meet in Biarritz. The pair are due to sit down together this afternoon

Mr Johnson is expected to warn Mr Trump during their showdown that the NHS is ‘off the table’ for any post-Brexit trade deal.

Number 10 has insisted neither the NHS, nor a watering down of animal welfare or food hygiene standards, will be up for discussion in trade negotiations with the White House.

Downing Street reportedly fears that the two issues of accusations of selling off the NHS and allowing the import of US-produced chlorinated chicken could be used by Jeremy Corbyn as ammunition during a potential snap general election.

While a broad free trade agreement – or at least a series of smaller deals – with the US are seen as a major post-Brexit prize, the British side is adamant it wants to secure the right deal rather than a quick agreement.

Before the summit had even started Mr Trump and EU leaders had exchanged trade war threats.

Mr Tusk said: ‘Trade wars will lead to recession, while trade deals will boost the economy.’ 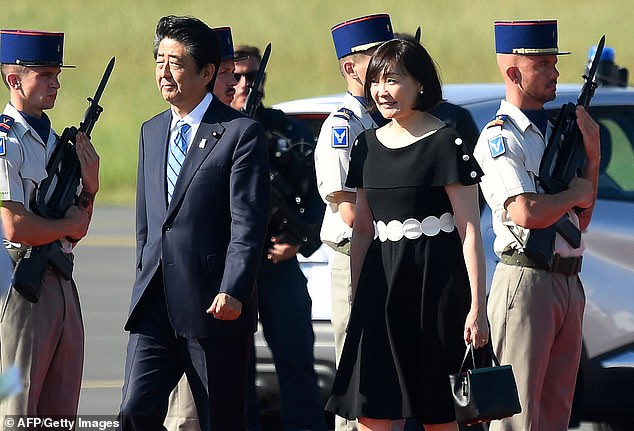 Shinzo Abe, the Japanese prime minister, and his wife Akie are pictured arriving in Biarritz today

Mr Trump flew into Biarritz on Air Force One hours after promising to impose punishing tariffs on French wine imports if Mr Macron doesn’t withdraw a tax on US tech giants.

Mr Tusk said the EU ‘will respond in kind’ and added: ‘The last thing we need is a confrontation with our best ally, the United States.

‘This is not our initiative, this trade and tariff struggle, but we have to be ready and we are ready.’

The G7 has traditionally been a forum for frank yet cordial discussions but the dynamic has changed since Mr Trump’s election in 2016.

European leaders are expected to use the summit to mount tough calls for action against fires in the Amazon rainforest despite Brazilian right wing President Jair Bolsonaro’s angry response to what he sees as outside interference.