Boris Johnson invoked Margaret Thatcher today as he defending tax hikes to pay for the NHS and social care – as he faced down business fury over supply chain chaos.

In his keynote speech, the PM delivered a defiant message that, unlike predecessors David Cameron and Theresa May, he has the ‘guts’ to push ahead with big reforms.

He insisted there is ‘no alternative’ to shifting from a ‘broken’ immigration-reliant economy to a high wage, high skill one after Brexit.

And he said that his predecessor Lady Thatcher would not have kept borrowing after the ‘meteorite’ of the pandemic left the health service under massive strain and national debt over £2trillion.

He said ‘structural change’ is the way to resolve the problems the country was facing as he pushed his ‘Levelling Up’ plans.

But he did say he wanted there to be ‘low tax’ in the longer term.

Mr Johnson opened by telling the party faithful he was pleased to be back ‘cheek by jowl’ and the country had opened up ‘faster than any other major economy in the world’.

He said that was down to the ‘unbeatable’ NHS – and referred to his experience in hospital as his life hung in the balance.

Mr Johnson set out the scale of the challenge Two trillion pounds and waiting lists will ‘go up before they come down’. A tide of anxiety

However, Mr Johnson is facing growing unrest over his blunt denial that the country is in ‘crisis’ with petrol stations running dry, spiking inflation and labour shortages. Amid warnings that Christmas could be ruined once again, he has argued it is ‘not his job’ to ‘fix’ all the problems for industry.

Next chief and Tory peer Lord Wolfson – who backed Brexit – added his voice to criticism this morning saying there was ‘despondency’ about the situation and the government’s approach was ‘not particularly constructive’.

He told BBC Radio 4’s Today programme that failing to take the issues seriously ‘leads to queues at petrol stations and pigs being unnecessarily shot’.

The Tories have been holding their first in-person conference since the 2019 general election, after the pandemic wreaked havoc on normal life.

But the proceedings have been largely dominated by events elsewhere, with petrol stations running dry and worries about labour shortages in crucial sectors causing months of misery.

Cabinet ministers are behind the premier on the need to push ahead with change, although they admit that

But there is increasing unrest about huge tax rises being brought in to bail out the NHS and social care.

Senior figures also fear ‘complacency’ over inflation – on track to hit double the Bank of England’s 2 per cent target – despite Mr Johnson saying he is not ‘worried’ about it.

No formal announcement is expected on the national living wage, but there are reports it will be lifted by 5 per cent to £9.42 within weeks. 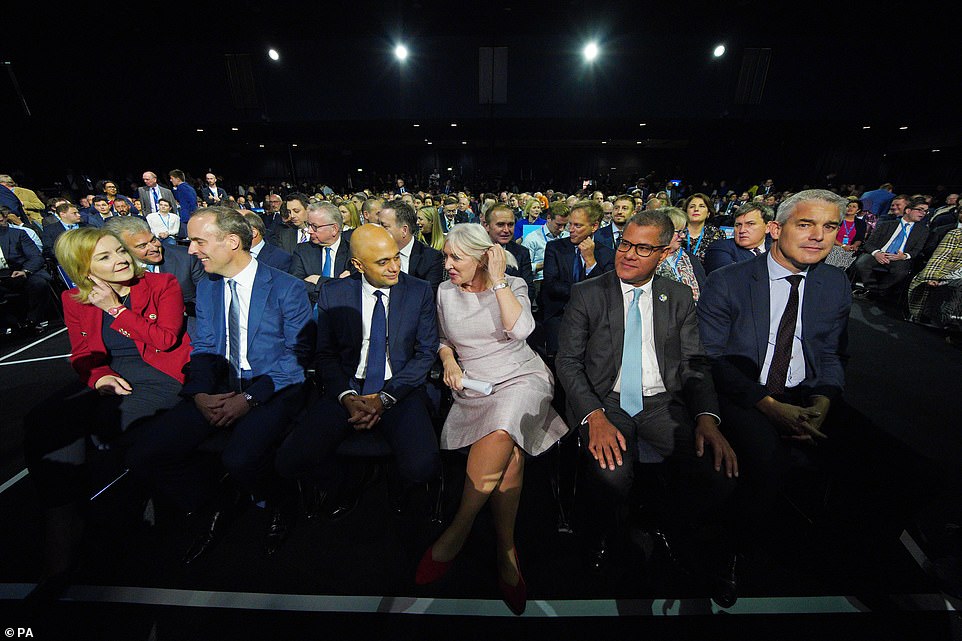 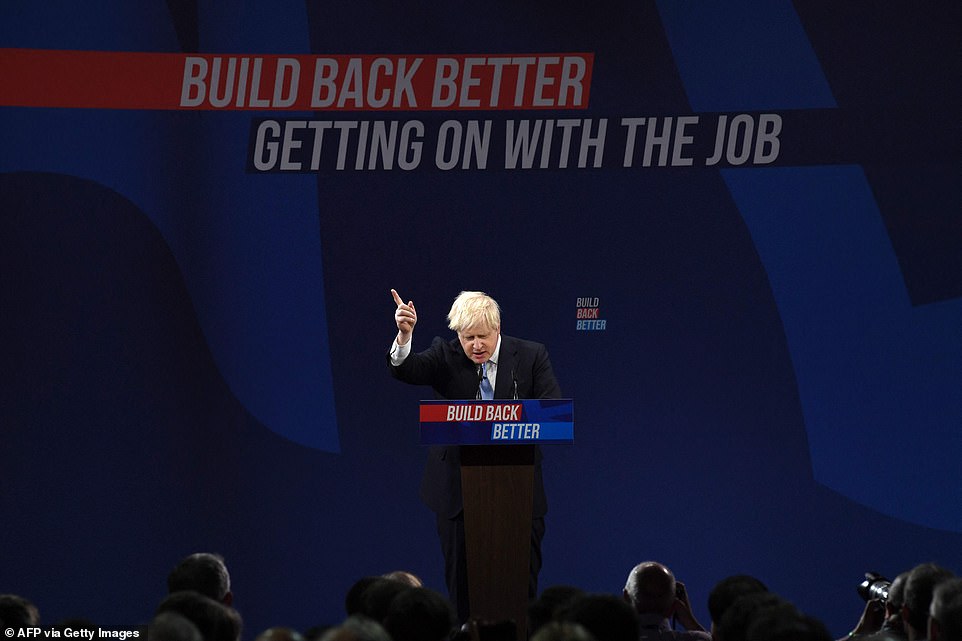 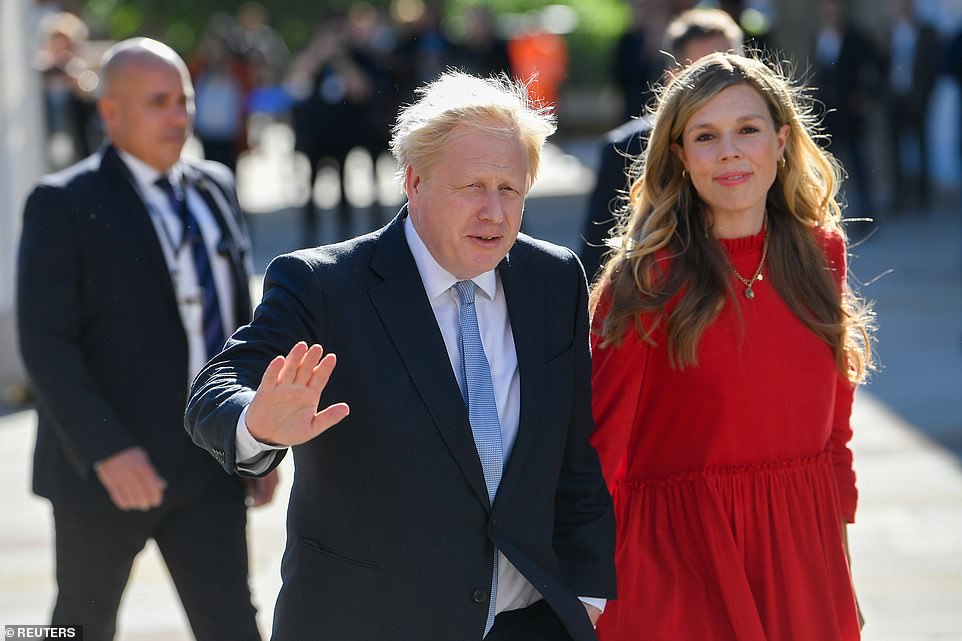 Boris Johnson arrived at the venue in Manchester with wife Carrie as he prepares to round off his party’s gathering with a defiant message thathe has the ‘guts’ to push ahead with big reforms. 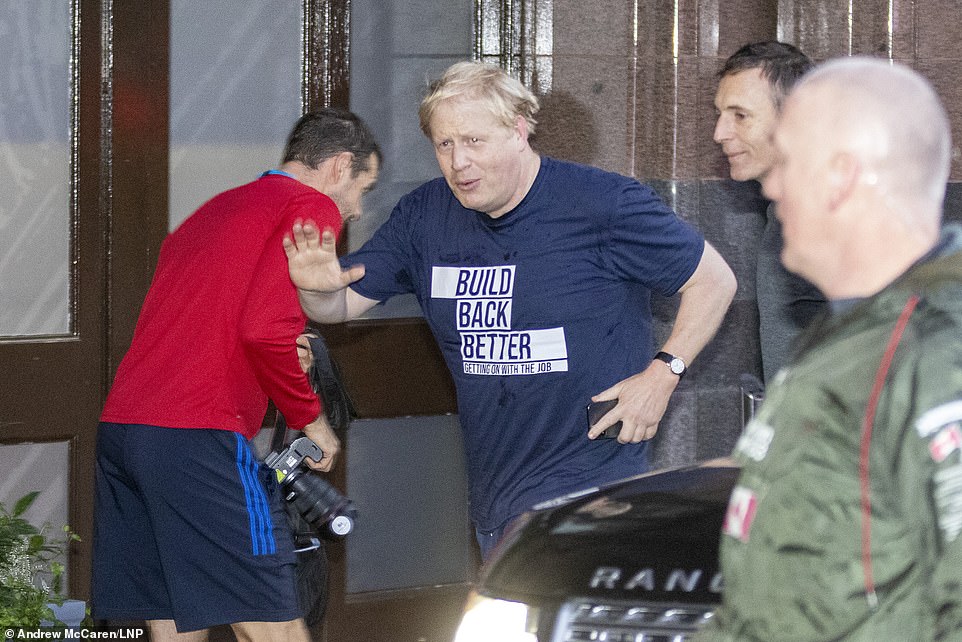 Boris Johnson (pictured running today) will round off his party’s gathering at lunchtime with a defiant message that, unlike predecessors, he has the ‘guts’ to push ahead with big reforms 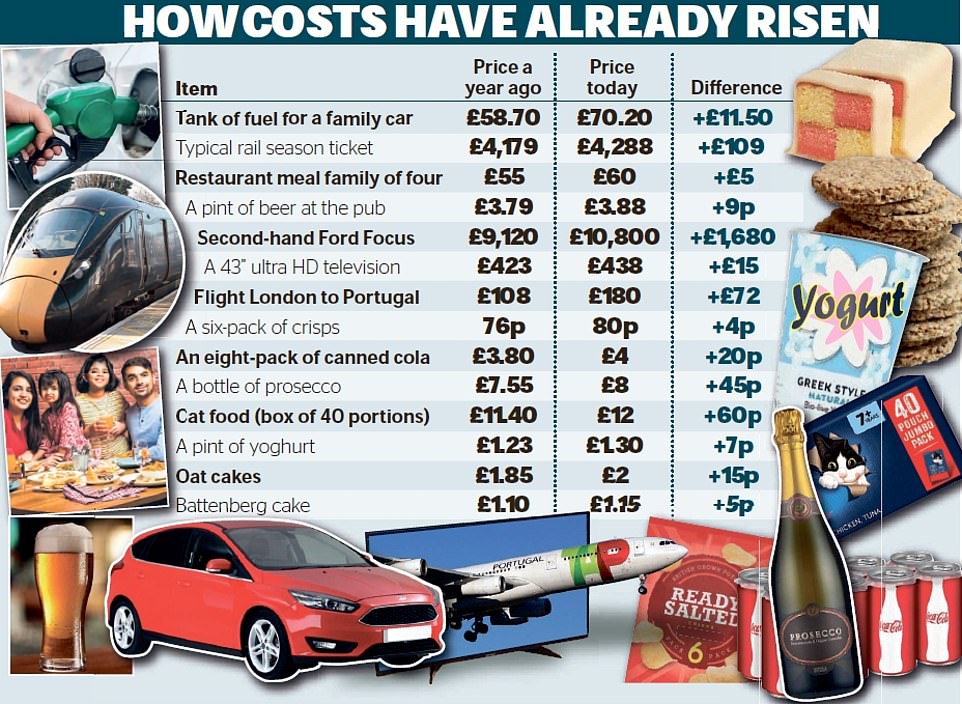 Analysis of price rises in the last year shows the cost of a second-hand car has risen more than £1,600, a tank of fuel is up more than £10 and the price of a pint of beer is creeping close to £4 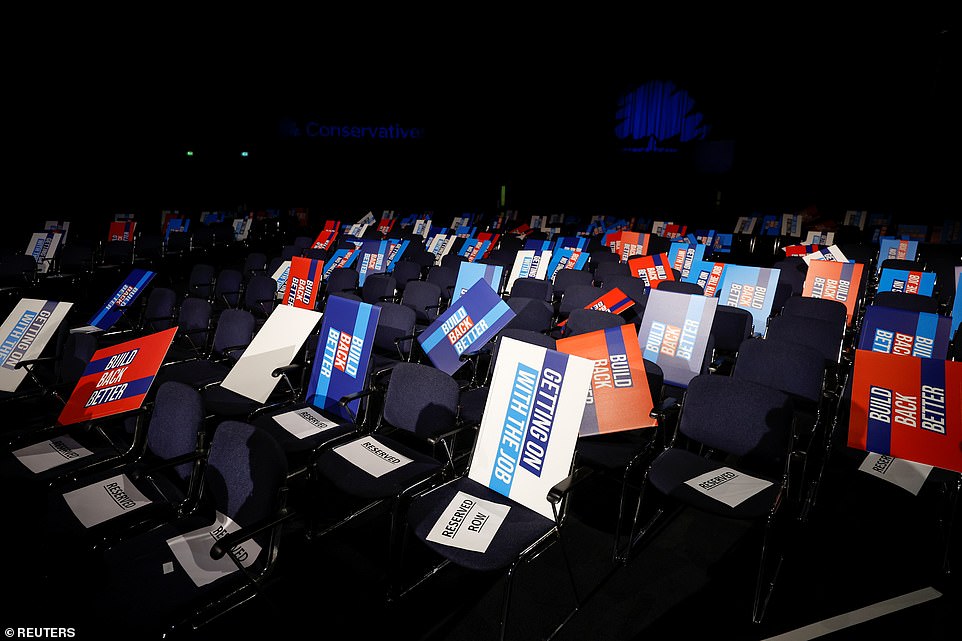 Families face £1,800 squeeze this year… as PM says he is not worried about inflation

The financial squeeze that Britons are facing this winter thanks to inflation driven by labour shortages, rising energy costs and gaps in global supply chains as the coronavirus pandemic subsides has been revealed by research – a day after the Prime Minister dismissed cost of living fears at the Conservative Party conference.

Exclusive research for the Daily Mail by the Centre for Economics and Business Research (CEBR) reveals how inflation will cost the typical family of four an extra £1,800 by the end of this year, while a retired couple can expect to see living costs rise by more than £1,100, and a lower income couple could be stung by nearly £900.

Meanwhile, a Money Mail poll today reveals that one in two households have already started making cutbacks due to concerns over the rising cost of living.

But while many Britons are fear a financial hit, Prime Minister Boris Johnson yesterday insisted that he is not worried about rising prices because he believes they will be temporary, and insisted it is ‘not his job’ to fix every aspect of supply chains in the UK.

Asked about the situation during the Conservative Party conference, he told the BBC: ‘Actually I think that people have been worried about inflation for a long time and it hasn’t materialised.’

In his speech, Mr Johnson will move to reassure voters in the Tory shires that they will not lose out from his flagship plan to ‘level up’ the North.

And in a thinly veiled swipe at Theresa May and David Cameron, he will claim to be the first PM for decades to have the ‘guts’ to tackle the deep-seated issues facing the UK.

The premier will say that as Britain emerges from the Covid pandemic it is now time to ‘get on with our job of uniting and levelling up across the UK’.

The levelling-up agenda has been seen as code for pouring cash into deprived parts of the North.

But Mr Johnson will also claim that by doing so it will take pressure off the ‘overheated’ South East.

It comes as reports suggest the Prime Minister is set to hike the minimum wage to £9.42 an hour in a bid to steer the country away from the ‘broken’ model of a low-wage, low-growth economy.

‘After decades of drift and dither, this reforming Government, this can-do Government that got Brexit done, is getting the vaccine rollout done and is going to get social care done,’ he will declare.

‘We are dealing with the biggest underlying issues of our economy and society. The problems that no Government has had the guts to tackle before.’

Mr Johnson will insist there can be no return to the days of mass immigration in the wake of Brexit.

He will tell activists that the Government is ’embarking now on the change of direction that has been long overdue in the UK economy’, adding: ‘We are not going back to the same old broken model with low wages, low growth, low skills and low productivity, all of it enabled and assisted by uncontrolled immigration.’

The PM is expected to repeat his call of recent days for firms facing staff shortages to give workers a pay rise, saying: ‘That is the direction in which this country is going – towards a high-wage, high-skill, high-productivity economy that the people of this country need and deserve.’

A Tory source said: ‘This is a message to business that if they want to fill their vacancies they are going to have to pay people more.’

The PM will say: ‘The answer is to control immigration, to allow people of talent to come to this country but not to use immigration as an excuse for failure to invest in people, in skills and in the equipment or machinery they need to do their jobs.’

Mr Johnson is also expected to announce a rise in the minimum wage within weeks, it emerged last night.

To someone working 35 hours per week, the increase would be worth an extra £928 a year before tax.

The £9.42 figure would be the third biggest annual rise since the 2008 financial crash.

It will also put the Government in line with the independent advisory body the Low Pay Commission (LPC), which estimated that its 2022 minimum wage recommendation would be £9.42. 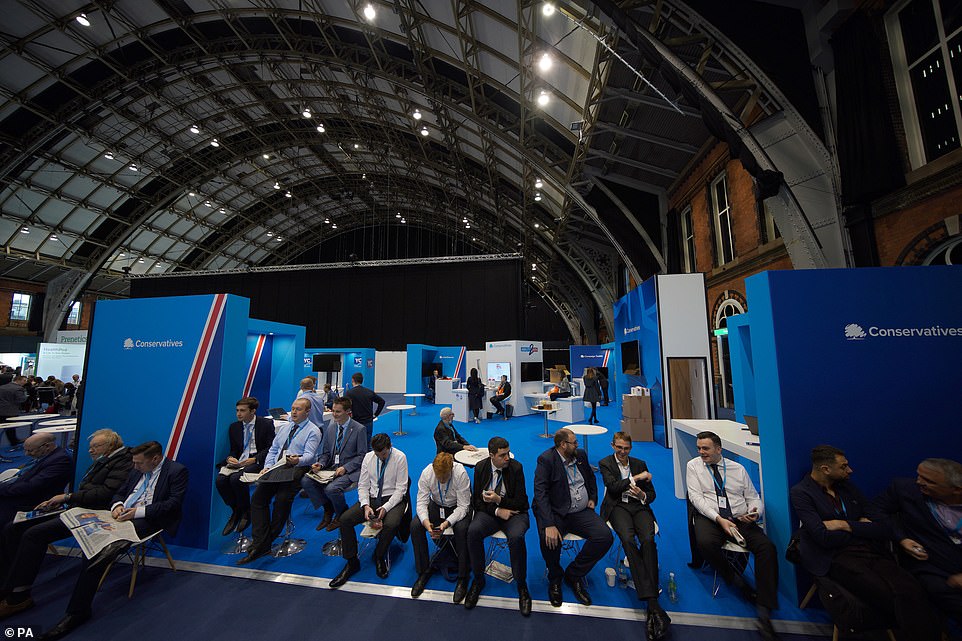 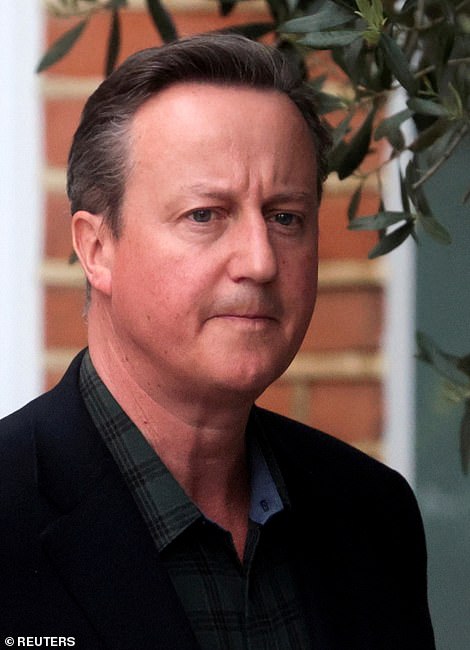 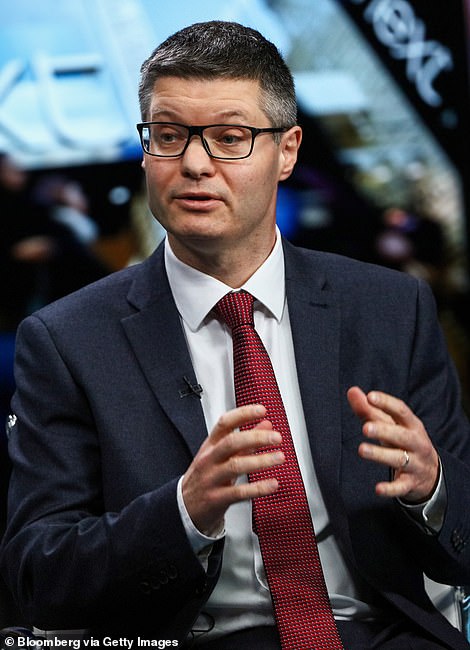 In a thinly-veiled swipe at Theresa May and David Cameron (pictured left), Mr Johnson will claim to be the first PM for decades to have the ‘guts’ to tackle the deep-seated issues facing the UK. Next chief and Tory peer Lord Wolfson (right) – who backed Brexit – added his voice to criticism this morning saying there was ‘despondency’ about the situation and the government’s approach was ‘not particularly constructive’

According to the Times, the Government’s figure could be higher – in the region of £9.45 per hour – but it will be around this point.

The figure falls short of Labour’s demand for a rise to £10 an hour, and way short of the £15 Unite figure which caused a stir at Labour’s party conference last wee.

It ultimately led to the resignation of Andy McDonald, who resigned from his shadow cabinet position after saying the leadership had ordered him to argue against the rise to £15, making his position ‘untenable’.

Sources, meanwhile, said much of the PM’s speech will focus on his pledge to ‘level up’ left-behind parts of the UK.

He is expected to back plans for the construction of a new rail line linking Manchester and Leeds.

But he will also reassure Tory voters in the South that they will benefit from investment in other parts, arguing that levelling up ‘helps to take the pressure off parts of the overheating South East, while simultaneously offering hope and opportunity to those areas that have felt left behind’.

He told BBC Radio 4’s Today programme: ‘Our vision for the economy as we bounce back from this terrible pandemic, employment rising, youth unemployment going down, is also to make sure that wages are rising.

‘Now, real wages are rising on the latest quarterly figures, but we need to support that and we can’t go back in the long term to being reliant on the addiction, if you like, of cheap, unskilled labour from abroad.’

He added: ‘It’s absolutely true that if we’re, over a long period of time, overly reliant on cheap, unskilled labour from abroad, we’re ducking some of the big productivity issues that we’ve got to address.’