Boris Johnson today claimed Jeremy Corbyn is not ‘tough enough’ to stand up to Nicola Sturgeon and reject her demands for a second Scottish independence referendum.

The Prime Minister said the only way Mr Corbyn could form a government after the election on December 12 would be if the SNP agrees to prop him up.

As a result, Mr Johnson said Mr Corbyn would inevitably buckle and go back on his promise not to hold a second vote on splitting up the UK in the ‘early years’ of a Labour government.

Mr Corbyn said last week he would not agree to an independence referendum in the first two years of being in power – but suggested he could agree to a vote taking place later.

Ms Sturgeon is adamant a second vote must be held before the end of next year and Mr Johnson said today he believed Mr Corbyn would bow to the Scottish First Minister’s demands.

He said of Mr Corbyn: ‘The only way he could conceivably form a government is if he agrees to Nicola Sturgeon’s demands to have a second referendum on Scotland.

‘And do you think he is really going to be in a position to refuse? 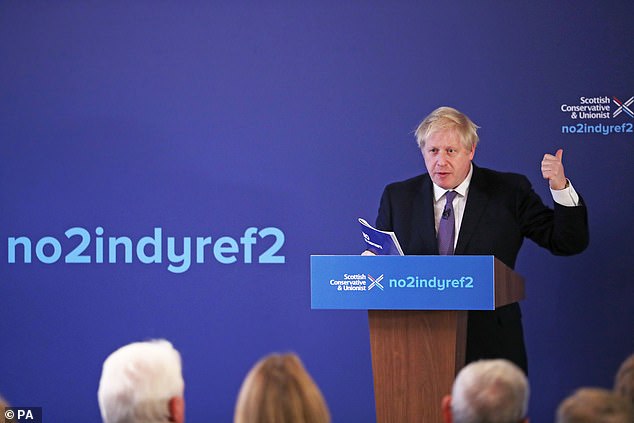 He added: ‘If Nicola puts the hard word on him. Do we want another referendum? That’s why this manifesto is so aptly named.

‘We don’t want another referendum on Scotland. We don’t. We rule it out.

‘Why? Because we do not want to destroy the moist successful political partnership of the last 300 years. ‘

The Scottish Conservatives’ manifesto is emblazoned with the slogan: ‘No2indyref2’.

Mr Johnson’s address in Fife came as he claimed it would cost more than £150 million and take at least nine months for Britain to hold referendums on Brexit and Scottish independence next year.

The premier insisted his party would focus on delivering on the 2016 vote to leave the EU and the ‘people’s priorities’.

Tory analysis suggested it would take a minimum of nine months to hold both referendums next year and would cost £155 million – with the second Brexit poll costing an estimated £138 million and the Scottish vote costing £17 million.

Mr Corbyn has vowed to give voters the final say on Brexit in a second referendum – with a ‘credible’ Leave option and Remain on the ballot paper – and has promised to resolve the issue within six months.

But he has said he would not support a second Scottish independence referendum within his first two years in office if he wins the keys to Number 10.

However, he has suggested he would not stand in the way of another referendum on breaking up the UK after that period if there was a majority in Holyrood in favour of one.

Ms Sturgeon has demanded that a second independence referendum take place before the end of next year.

She said over the weekend that she would press for such a vote by the end of 2020 as part of any agreement to support support a minority Labour government.

The SNP is confident that Mr Corbyn would give in on the issue and allow the vote to take place if that was the price of becoming PM. 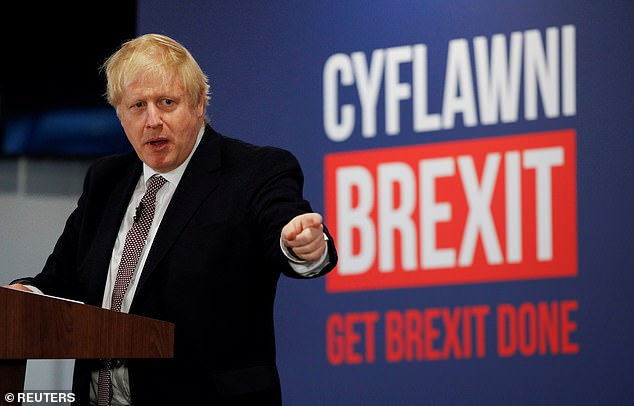 The PM said: ‘A majority Conservative government would get Brexit done and focus on the people’s priorities – such as increasing funding in our NHS and reducing the cost of living.

‘The alternative is Jeremy Corbyn, a man who can’t even make up his mind on Brexit, submitting to a pact with Nicola Sturgeon, and we already know what terms she will demand – another divisive referendum on Scottish independence alongside a second vote on Brexit.

‘The financial cost of this to taxpayers up and down the country will be in excess of £150 million.

‘But the real cost will be much, much higher: the chaos of two referendums in 2020 grinding the country to a halt and the world’s greatest political union reduced to the status of a bargaining chip.’