Boris Johnson compared Brexit to the eternal torment of Greek god Prometheus having his liver pecked out by an eagle in a bizarre speech to the UN.

The Prime Minister spoke of ‘terrifying limbless chickens’ and ‘pink-eyed terminators’ as he compared Remainers’ treatment of those who voted to leave the EU to Zeus as he eternally tormented Prometheus.

Johnson only mentioned Brexit once during his speech at the UN General Assembly last night after the UK’s Supreme Court found he’d acted unlawfully by suspending Parliament.

During a late-night, 20-minute address that drew laughs and baffled looks from delegates, he warned of technology’s capacity to control citizens. He made no mention of the court ruling.

The shock ruling plunged his plans to exit the European Union by October 31 into crisis and sparked calls by opposition MPs that he resign immediately.

At the UN, Johnson painted the possibility of a future where devices in every household ‘monitor your nightmares, monitor your fridge,’ and where smart cities are ‘as antiseptic as a Zurich pharmacy.’ 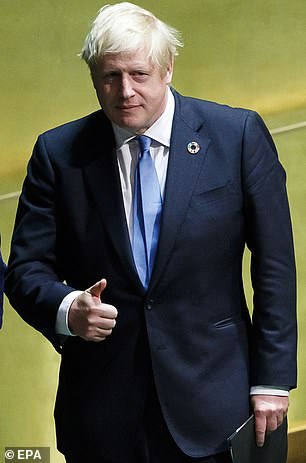 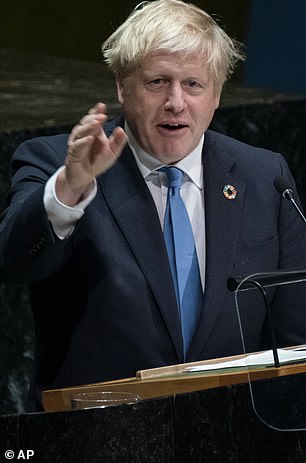 ‘Alexa will pretend to take orders but this Alexa will be watching you, clapping her tongue and stamping her foot,’ Johnson boomed, suggesting ‘there may be nowhere to hide.’

‘As new technologies seem to race towards us from the far horizon we strain our eyes as they come, to make out whether they are for good or bad, friends or foes.

‘AI, what will it mean?’ he asked of artificial intelligence. ‘Helpful robots washing and caring for an ageing population or pink-eyed terminators sent back from the future to cull the human race?’

He went on to wonder whether synthetic biology could restore tissues ‘like some fantastic hangover cure’ or ‘bring terrifying limbless chickens to our tables.’ 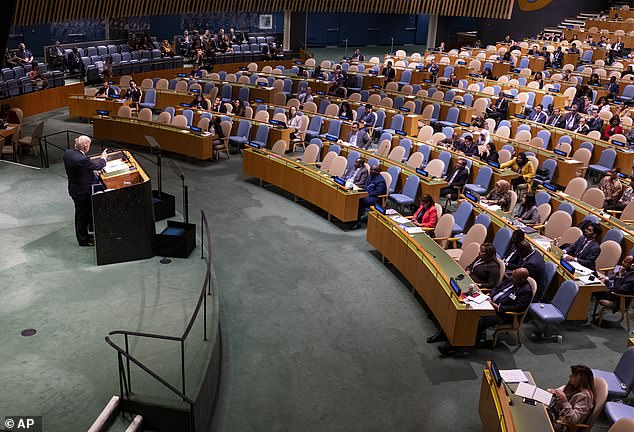 Johnson also referenced one of his favorite subjects, Greek mythology, by telling the story of Zeus punishing Prometheus by ensuring that an eagle ate his liver over and over again.

‘This went on forever. A bit like the experience of Brexit in the UK if some of our parliamentarians had their way,’ he said, drawing laughs from the remaining delegates in the largely deserted hall.

The Conservative leader made an impassioned plea for technology to be a force for good and said he was optimistic it could ‘serve as a liberator and to remake the world wondrously and benignly.’

In Greek mythology, Prometheus was a Titan who stole fire from the gods in order to give it to humanity for the benefit of mankind.

The trickster’s defiance of the gods was punished by their leader, Zeus.

He had Prometheus chained to a mountainside for eternity.

Every single day, an eagle would swoop down on the prisoner and peck out his liver.

He would be left in agony as the wound healed over in time for the next day, when the bird would return to torture him again.

He called on world leaders to agree to a set of guidelines to ensure that new technologies are designed ethically before inviting them to join him at a tech summit in London next year.

Whether Johnson is still prime minister then remains to be seen. Following his UN address he was due to fly back to Britain where a political storm awaits him, cutting his New York trip short.

He also poked fun at France during his speech, reminiscing about how when he was mayor of London the city had more Michelin stars than Paris.

‘The French somehow rapidly recovered – by a process that I wasn’t quite sure was entirely fair,’ he joked.

The PM also invited the Iranian president to London during his whirlwind trip to New York, but still called for ‘progress’ on the cases of Britons jailed in Tehran.

His meeting with Hassan Rouhani at the UN General Assembly yesterday came amid heightening tensions with the Islamic republic.

But the pair were pictured laughing as Mr Johnson invited Mr Rouhani to London where they could ‘discuss things more’.

Mr Johnson was keen to raise the case of British-Iranian mother Nazanin Zaghari-Ratcliffe, who is more than half way through a five-year jail term for spying. 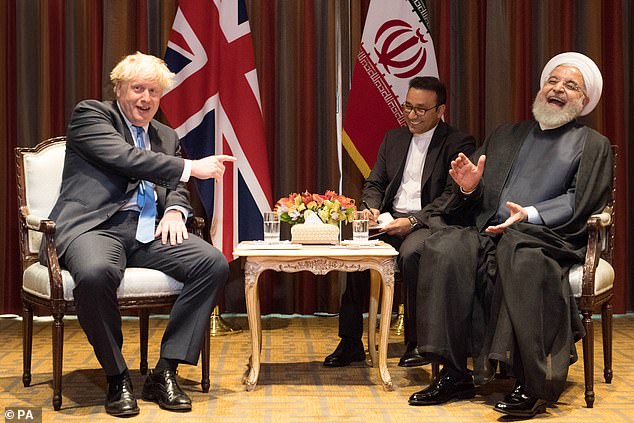 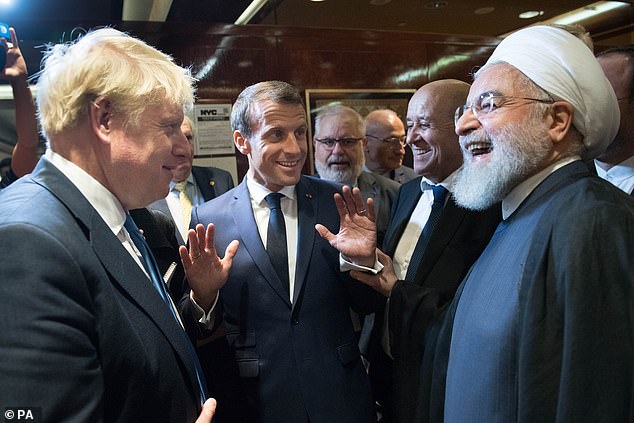 Adding that his 2017 visit to Tehran in his previous job was ‘very productive’, he added: ‘I think we still have a lot of progress to make.’

Despite an apparent jovial exchange between the two leaders, Mr Johnson told President Rouhani: ‘There are other issues also I wish to raise with you and we retain serious concerns about the detention of dual nationals in Tehran and we are looking forward to make progress on that.’