Boris Johnson dodges questions over whether Mark Sedwill was forced out

Boris Johnson praised the ‘incredible service’ of Sir Mark Sedwill today as he dodged questions over whether he was forced out in a power struggle with Dominic Cummings.

The PM insisted the Cabinet Secretary had ‘seen the government through all sorts’ since taking on the role two years ago – and hinted that he could contribute in future.

But in an interview with Times Radio he dismissed ‘briefing’ coming from aides and the heart of Whitehall in recent weeks about the future of the country’s most senior civil servant.

The comments came amid claims Mr Johnson is looking for a Brexiteer to succeed Sir Mark, who will be handed a peerage and a bumper civil service pay-off when he stands down later this year.

Britain’s top civil servant, 55, last night confirmed he will step down as both Cabinet Secretary and national security adviser in September, after more than 30 years in Government service.

Sir Mark Sedwill (pictured in Westminster today) has confirmed he will step down as both Cabinet Secretary and national security adviser in September, after more than 30 years in Government service 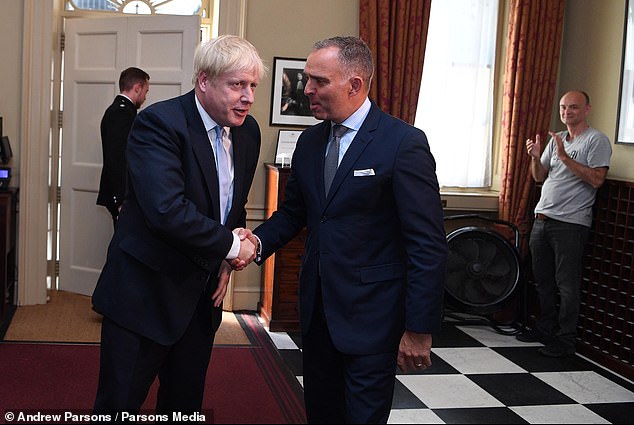 Sir Mark Sedwill (middle with Boris Johnson left) said it had been ‘a privilege to serve’ as he announced he will stand down from both roles in September, after over 30 years in Government service

Sir Mark’s departure comes just days after Mr Cummings is reported to have told Government advisers ‘a hard rain is coming’ to Whitehall – an apparent reference to the radioactive showers that follow a nuclear blast.

He is said to have advised Mr Johnson to sack the former diplomat at the end of last month following clashes over the scale and timing of the planned overhaul.

But Mr Johnson and Sir Mark finalised his departure at a private lunch on June 2, and agreed to try to paint the departure as amicable.

In his interview this morning, Mr Johnson said: ‘Sir Mark has given incredible service to this country. He came in at a very difficult time.

‘He has seen the Government through all sorts of very tough stuff – changes in the premiership, an election, Brexit, dealing with the worst bits of the Covid crisis. He has got a lot more to offer and I am sure he will.’

He played down suggestions that Sir Mark had been the subject of a series of negative briefings in the media.

‘I try not to read too much of the negative briefing. There is an awful lot of stuff that comes out in the papers to which I wouldn’t automatically attach the utmost credence,’ he said.

‘People brief all kinds of things into the newspapers. All I can tell you is Mark is an outstanding servant to this country and will continue to be so.’

Bob Kerslake, a former head of the Civil Service, along with the civil servants’ union accused Number 10 ‘or those around it’ of working to ‘undermine’ the ex-diplomat.

Speaking to the Guardian, Lord Kerslake said: ‘I fear from some of the press briefing that had obviously gone on that the Civil Service is being made the fall guy for mistakes made in the handling of the pandemic.’

Dave Penman, general secretary of the FDA, which represents public officials, said: ‘No 10, or those around it, has sought to undermine Sir Mark and the leadership of the civil service, with a series of anonymous briefings against him over many months.’ He blasted the tactics as ‘corrosive and cowardly’ and said the Government would be ‘weaker as a result’ of the departure.

It comes as Dominic Cummings, the PM’s chief aide, prepares to take an axe to the Civil Service after the coronavirus exposed ‘fundamental’ flaws in the government machine