Boris Johnson, pictured at the PM’s key speech in Florence last week, is risking a fresh Cabinet meltdown over Brexit

Boris Johnson is said to be risking a fresh Cabinet meltdown over Brexit by setting more red lines for the negotiations.

The Foreign Secretary is apparently demanding that Britain does not accept any new regulations from Brussels during a mooted two-year transition period.

The issue is likely to be a flashpoint within the government and with the EU as the negotiations intensify over the coming months.

Brexiteers want the UK to be able to set our own rules and strip out red tape as soon as possible in order to gain a competitive advantage.

But Eurocrats will try to insist that we must fully agree to all EU regulations while we have the benefits of our current membership terms.

The Cabinet struck an uneasy truce last week before Theresa May’s crucial speech in Florence, where she made a series of concessions to the EU in a bid to unblock talks.

The PM said the UK was ready to cover the huge hole left in Brussels’ finances for another two years after we formally leave in 2019 – contributing potentially another 20 billion euros – and meet other liabilities that could total tens of billions more.

She also said the European court could help enforce the rights of EU nationals – easing back a previous red line – and admitted that bringing in tougher immigration measures would take time, raising the possibility that free movement rules could essentially stay in place for longer.

But Mrs May said in return for the ‘generous’ offer the UK must have full access to the single market during a two-year ‘transition’ period.

Setting out her vision for a post-Brexit future, she also ruled out existing models for trade arrangements such as Norway’s, saying: ‘We can do better than that.’

She suggested the final deal should be ‘bespoke’, but could be a much looser affiliation similar to that sealed with Canada.

Mr Johnson praised the speech as ‘positive, optimistic and dynamic’. But he had thrown the Cabinet into chaos the previous week with a bombshell article seen as an attempt to push the PM into a harder stance on Brexit.

He even made an apparent resignation threat to maximise his leverage, before backing off on the eve of the speech. 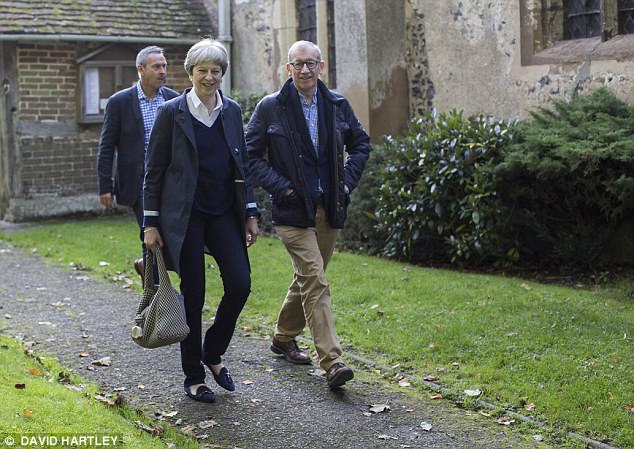 Mrs May, pictured going to church in her Maidenhead constituency with husband Philip today, is trying to manage the vying factions on Brexit within her Cabinet 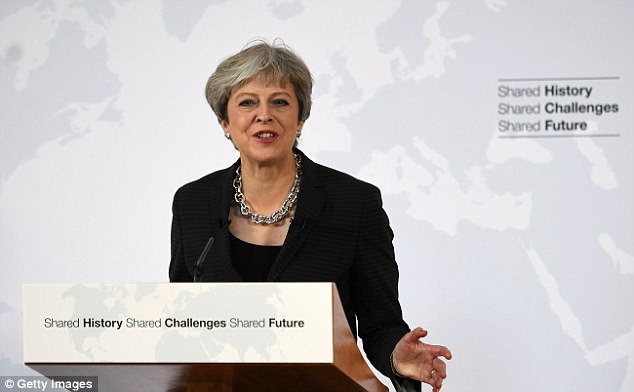 Boris Johnson hailed the speech in a tweet afterwards, saying it ‘rightly’ disposed of the ‘Norway option’ of staying in the EU single market

According to the Sunday Telegraph, Mr Johnson is now agitating on the issue of whether Britain should have to adopt EU rules and regulations after formally leaving the bloc in March 2019.

A Cabinet source told the newspaper: “Boris will be one of those Cabinet ministers pushing to make sure we don’t have any new EU rules and regulations during the transition.”

One ally of Mr Johnson said: “There should not be any new regulations during that period. We should uphold those we have already but not take any more.”

Ministers are hoping they can skate over the topic of new regulation, even though we will not be able to vote on the substance of rules during the transition.

Many point out that due to the glacial speed of legislation in the EU, any new rules that come into force during the two years will in reality have been approved by the UK while it was still a member of the bloc.