Boris Johnson laid down the gauntlet to Jeremy Corbyn on social care yesterday – challenging him to work on a cross-party deal to fix the crisis.

As the pair clashed for the first time in the Commons, the new Prime Minister said the Tories and Labour needed to build consensus in order to end the scandal which sees people having to sell their homes to pay for care in old age.

But Mr Johnson warned that if Labour refused to play ball, the Conservatives would come up with their own plan to fix the issue.

Mr Johnson vowed in Downing Street on Wednesday that he would protect the elderly from the fear of ‘having to sell your home to pay for the costs of care’. He said his team had drawn up plans to ‘fix’ the social care crisis ‘once and for all’.

Yesterday, the Prime Minister came under intense pressure to publish these plans – as an expert told him it would cost just £5 billion a year.

Sir Andrew Dilnot, the economist who drew up plans for a cap on care costs eight years ago, called for a state-backed insurance scheme to end the risk that people face catastrophic bills. A similar scheme was floated by Health Secretary Matt Hancock during the Tory leadership campaign.

Yesterday, Mr Johnson was asked by a Labour MP whether he would give social care an immediate cash injection as well as long-term funding reform. Liz Kendall, a former shadow health minister, said: ‘Above all, it means deciding that funding cannot be left to individuals and families alone.

‘We must pool our resources and share our risks to ensure security and dignity for all.’

Mr Johnson replied: ‘I agree very strongly with the thrust of what she says.

‘I suggest it is high time that this House again tried to work across parties to find a cross-party consensus about the way forward. That is absolutely vital. If the Opposition are not interested, we will fix it ourselves, but I urge them to think of the good of the nation.’ 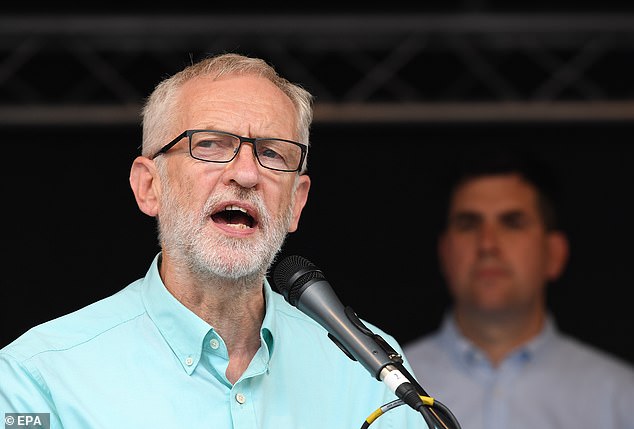 Both parties have failed to tackle the issue of social care for more than 20 years, despite strings of promises.

In 2011, Sir Andrew published a government-backed report demanding a lifetime cap on the amount people have to pay for their care, but his suggestions were never implemented.

Yesterday he told the Radio 4 Today programme that elderly people were ‘frightened’ about the care costs they face. Sir Andrew said money was not the problem – the issue was political will. Previous prime ministers David Cameron and Theresa May had not thrown their weight behind the need for social care reform.

But he warned that the country did not need ‘another wheeze’.

Sir Andrew said: ‘I’m delighted to see it being taken very seriously – the problems of social care are great, they’ve been listed as essential to be solved by most recent governments, and we haven’t ended up doing anything. 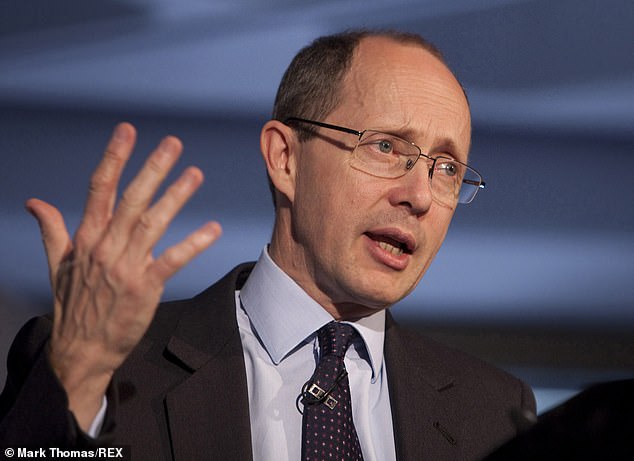 Sir Andrew Dilnot, the economist who drew up plans for a cap on care costs eight years ago, called for a state-backed insurance scheme to end the risk that people face catastrophic bills

‘So it’s good to see that it’s being discussed and there’s a commitment here, but until we see what is actually proposed, we can’t really assess whether it will be an effective way of doing it.

‘We don’t need another wheeze.’

‘And tinkering with the current flawed, dysfunctional system, which lets too many older people down, won’t do.

‘We need a new settlement to guarantee decent support when you need it. And the Prime Minister needs to be prepared to work on a cross-party basis if we are to secure a lasting settlement.’

Why, unlike the others, he must copy his idol and make it happen

When Winston Churchill wanted to ensure officials followed his instructions swiftly, he would stamp documents with the command ‘Action This Day’.

Churchill is Boris Johnson’s political hero, but if the PM wants to emulate him he should perhaps apply the ‘Action This Day’ spirit to one of the biggest scandals facing the country: The social care crisis.

On the steps of No 10 on Wednesday, Mr Johnson pledged to ‘fix’ the scandal ‘once and for all’ – claiming he had drawn up a plan to do so. Observers welcomed the rhetoric, but said the time for talk was over.

Churchill is Boris Johnson’s political hero, but if the PM wants to emulate him he should perhaps apply the ‘Action This Day’ spirit to one of the biggest scandals facing the country: The social care crisis

For more than two decades, politicians have promised action to stop the elderly having to sell their homes to pay sky-high care bills. But nothing has been done.

Here are just some of the promises made:

‘I don’t want [our children] brought up in a country where the only way pensioners can get long-term care is by selling their home.’

‘We can and must look to give people the opportunity and the support to save for their old age in a way which protects their houses and their inheritance.’

‘We should be able to construct a system where that doesn’t have to happen [elderly people selling their homes].’

‘We want to give people the certainty that they don’t have to sell their home to pay for care’.

‘Our final pledge is to ensure Britain has a strong economy so we can protect the NHS and make sure no one is forced to sell their home to pay for care.’

‘We need to ensure we have got that long-term solution for a sustainable future for social care.’

‘We therefore need a system that includes an element of risk-pooling, and we will bring forward ideas as to how to do this alongside their potential costs in the Green Paper.’

‘My job is to protect you or your parents or grandparents from the fear of having to sell your home to pay for the costs of care.

‘And so I am announcing now – on the steps of Downing Street – that we will fix the crisis in social care once and for all with a clear plan we have prepared to give every older person the dignity and security they deserve.’

Her late husband Roy was a money man, an accountant with financial giant Deloitte and a whizz with figures at both work and home.

He certainly set his family up for the future. Iris Laing had a beautiful home in Reading with a garden that was the envy of the neighbours.

And with her savings invested wisely – reaping the benefits of a five per cent interest rate – surely she would never have to worry about money again? Not quite.

If Roy were alive today, he would be horrified to see how things have panned out for his wife.

‘If Iris knew herself, I can’t imagine what she would think’, says Peter Evans, her cousin and the person responsible for running Iris’s affairs after she was diagnosed with Alzheimer’s 12 years ago.

Like his cousin’s late husband, Peter is also a retired City trader. He is used to dealing with daunting figures on a spreadsheet.

It was in 2007 that Peter, who lives in Sunbury-on-Thames in Surrey, stepped up to the mark at a time of family crisis.

Having just lost her husband, Iris’s condition was deteriorating and she was fast losing the ability to make decisions and so power of attorney was needed.

Peter and Iris hadn’t exactly been close as children, but had seen more of each other’s families throughout the 80s and 90s.

‘We still weren’t close, but we’d have them over a few times a year,’ Peter recalls. ‘Before she was diagnosed we knew something was wrong. Once at dinner she was sick all over the place, completely out of the blue.’

Soon the once-lively Iris became forgetful and confused. ‘She’d always been so immaculate. Her hair was perfect. Her house was always spotless.’ When it became clear that Iris was struggling, Peter was contacted by her neighbour of 40 years. 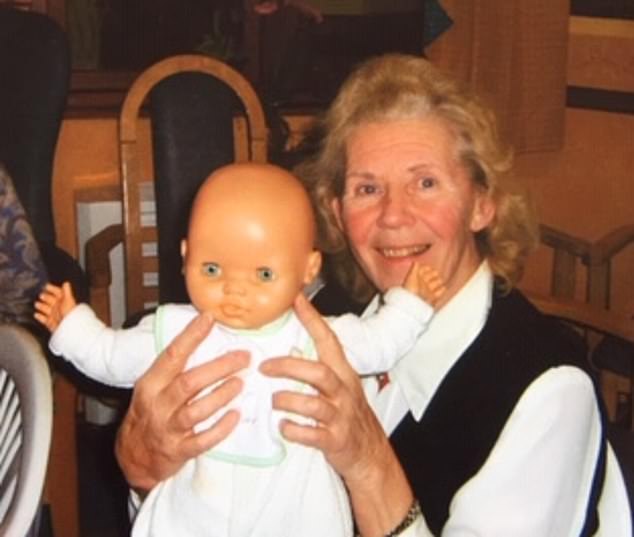 Having just lost her husband, Iris’s condition was deteriorating and she was fast losing the ability to make decisions

‘I was happy to help out, because there weren’t really any other blood relatives.’ And in November 2007, they were forced to move Iris into a care home. Now, 12 years on, Iris is still with us. To a point. It has been many years since she has been able to recognise Peter.

She now lives in a nursing home in Surrey, her third such establishment. The first, says Peter, chosen by the local council was a ‘hideous place’.

Peter’s attempts to find a better home proved quite the ordeal. ‘The number of ones which smelled of urine…’ he complains. ‘I wasn’t having it for Iris.’

She stayed in the second nursing home for four years, before a change of management led to her care becoming less attentive.

Her current home is ‘one of the best’, he insists. For Iris, life has all but ceased and it is distressing to witness. ‘I used to go twice a week, but now it’s more like once. I volunteer as a helper there now. I drive the bus on outings.’

Iris’s days of trips out are over. She is a prisoner, if only in her own body. ‘She’s barely conscious. At night she just lies in her bed and stares at the ceiling.’

In fact, Iris is dying as she lived – quietly, without much fuss. ‘She’s very docile,’ says Peter. ‘Always was. Still is. You’d hardly know she was there.’

But if Iris could comprehend how her savings have been plundered, it is unlikely she would remain so tranquil. For the figures involved are just extraordinary.

‘At the minute, Iris’s nursing home is costing £7,200 a month. But things like toiletries are extra. All her savings are gone. Most of the money from the sale of her £335,000 house is too. If she lives for another three years – which she may well do – everything will be gone.’ What happens then?

‘Well when her savings run down to the magic £23,250 figure [the threshold below which the government pays for care], the council will start paying something. But will they pay £7,200 a month? I doubt it.’ Peter, who is not a beneficiary in Iris’s will, has been doing his best to stem the haemorrhage from Iris’s accounts.

When he first started handling the finances, it was much easier. ‘With half a million invested, and interest rates at four or five per cent, there was a bit more balance. But more recently you are lucky to get one per cent, and I can’t take any risks with her capital.’ In short, Iris’s money is disappearing at a horrifying rate.

Peter resents the extortionate fees. ‘All these nursing homes are businesses. They will always be businesses, and that’s the problem. Every year they put fees up, but never up by one per cent or two per cent. I’ve seen fees go up by even seven per cent a year.’

Of course, Peter could have housed Iris in a cheaper home. He shudders. ‘I couldn’t, hand on heart, have put her in some of the cheaper places I went to see. You wouldn’t put an animal there.’

So Iris will continue to have the best care. But for how long? ‘She could keep on going – and even outlive me!’, Peter concludes. ‘What on earth will happen then?’

You can help send a message: Sign our petition change.org/dementiacare