Boris Johnson says he is ‘glad’ a Labour activist confronted him at a hospital yesterday over the state of the NHS as it is part of his job.

Omar Salem accosted the PM at Whipps Cross University Hospital in north-east London to complain about the care his seven-day old daughter received after she ‘nearly died’.

In the widely-shared video, Mr Salem complained there were ‘not enough doctors or nurses’ and ‘this ward is not safe for children’.

The Tory leader has since responded in a tweet: ‘I’ve been PM for 57 days, part of my job is to talk to people on the ground and listen to what they tell me about the big problems.

‘It doesn’t matter if they agree with me. I’m glad this gentleman told me his problems. This isn’t an embarrassment this is part of my job.’

Omar Salem, whose child was being treated at Whipps Cross University Hospital in north-east London , accosted the PM to complain there were not enough doctors and nurses 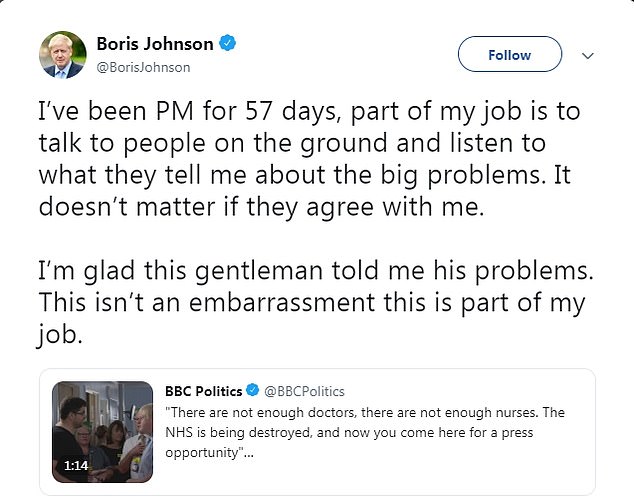 In a tweet, Boris Johnson said he was ‘glad’ he was confronted, saying ‘this isn’t an embarrassment this is part of my job’

It is the latest confrontation with a member of the public that Mr Johnson has endured since becoming Prime Minister in July as he comes under pressure on several fronts. 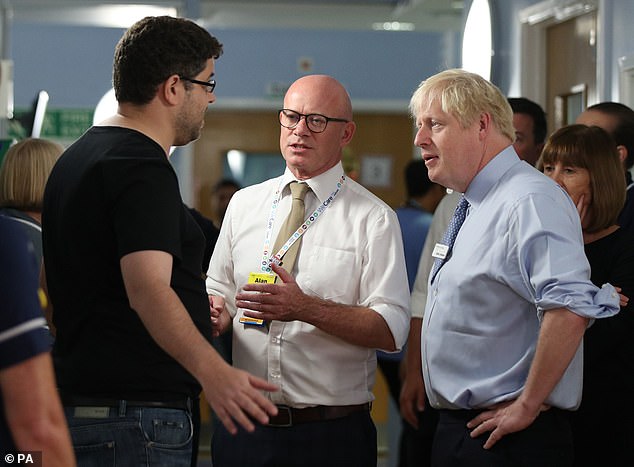 But the man retorted: ‘That’s not going to fix things now. Years and years of the NHS being destroyed.’

Mr Salem, thought to be in his 20s, revealed his identity and gave more details of his motivations on Twitter this afternoon.

‘Boris Johnson had the temerity to come to @WhippsCrossHosp for a press opportunity on the children’s ward that my 7 day old daughter is on, having been admitted to A&E yesterday gravely ill,’ he wrote.

‘The A&E team were great but she then went for hours on the ward without seeing a doctor.’ 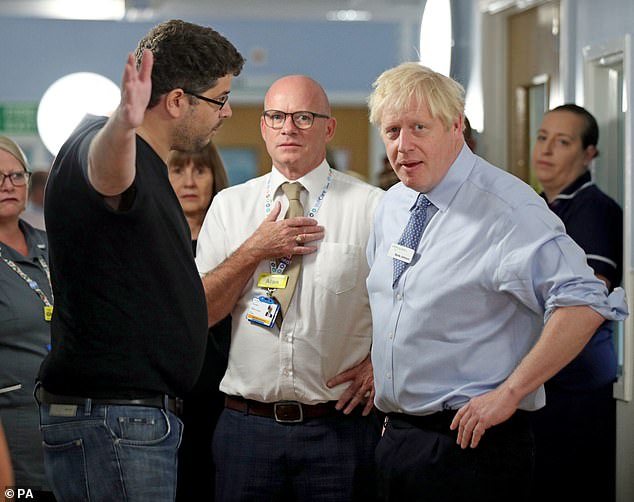 When Mr Salem accused him of only coming for a photo op, Mr Johnson said there were no press with him. But Mr Salem then pointed to the cameras and reporters down the corridor 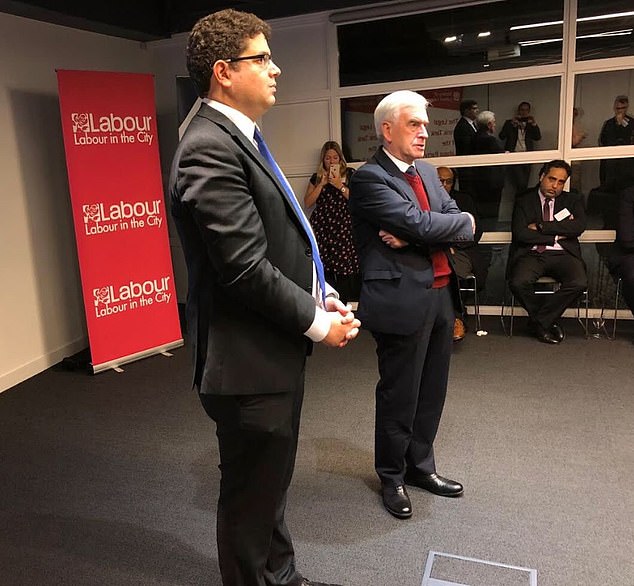 Mr Salem has posted pictures of Labour politicians on his Twitter feed, including this shot of him with John McDonnell

During the extraordinary clash, Mr Johnson denied coming to the hospital for a photo op, saying ‘there’s no press here’.

But the incredulous parent gestured to cameras filming the confrontation and said: ‘What do you mean there’s no press here, who are these people?’

How the exchange between the PM and Omar Salem unfolded

Omar Salem approached the PM in a corridor at Whipps Cross Hospital today.

He said: ‘My daughter nearly died yesterday. I came in and the A&E guys were great… but then I came down to this ward here…

‘It took us two hours for adrenaline to be put into my seven-day old daughter..

‘She was six days and 22 hours or something.

‘That is just not acceptable.  This ward is not safe for children.’

He went on: ‘There was one registrar covering the entire (inaudible) and neonatal unit… would you like that for your own children?’

Mr Johnson interjected: ‘Actually there is no press here.’

But pointing to the waiting cameras in the corridor, Mr Salem said: ‘What do you mean there’s no press, who are these people?’

But Mr Salem: ‘That’s not going to fix things now. Years and years of the NHS being destroyed.’

Mr Johnson said ‘I understand’, ‘we’re working on it’ and ‘we’re putting more money into it’ as the trust chief executive tried to step in.

Mr Salem did not give details of exactly what happened to his daughter, but said she was brought into A&E yesterday, when she was six days and 22 hours old.

He suggested the treatment there had been satisfactory, but problems began when they were brought to the ward and had to wait hours for care.

‘That is not acceptable,’ Mr Salem said.

‘This ward is not safe for children.

‘There was one registrar covering the entire (inaudible) and neonatal unit… would you like that for your own children?’

Mr Johnson said ‘I understand’, ‘we’re working on it’ and ‘we’re putting more money into it’ as the trust chief executive tried to intervene.

A spokesman for the Prime Minister said he was visiting public services to see for himself the reality of the situation.

Sources suggested Mr Johnson thought there was only a No10 camera with him on the visit today – whereas in fact a Press Association reporter was taking video footage.

The spokesman said the man was understandably ‘very distressed’, and Mr Johnson was ‘not going to hide away from those circumstances when he goes on these visits’.

‘Obviously he is keen to talk to people and empathise and see what he can do to help,’ the spokesman added.

‘It’s also a reminder of why exactly he is so keen to make the NHS a priority and make sure it’s getting the funding that it requires.’

Aides dismissed the fact that Mr Salem was a Labour activist, saying he had clearly been through a difficult experience and was exactly the kind of person Mr Johnson wanted to meet on such visits.

On his Twitter feed, Mr Salem said he had given Mr Johnson ‘a piece of my mind about how he is running the NHS based on the experience with my 7 day old daughter, who was neglected for hours last night’.

‘Boris Johnson has been an MP, Mayor of London, Cabinet Minister and now PM while the NHS has been neglected, just as my daughter was last night,’ he said

‘Rather than drips of money for press opportunities he should get on with properly supporting the NHS so that patients get the care they deserve, there is adequate staffing with good working conditions and worried fathers like me can have some peace of mind.’

Mr Salem also shrugged off the relevance of being a Labour activist. ‘My Labour values are WHY I back proper support for the NHS. I am not ashamed of them.’

Labour said Mr Johnson was being confronted by the effects of Conservative austerity and hit out at his claim there was ‘no press’ at the event.

Lawyer and local Labour activist who confronted the PM

Omar Salem is a lawyer and lives in South Woodford.

According to his Twitter feed, Mr Salem, thought to be in his 20s, is a Labour activist.

He has campaigned against Brexit and says he wants to help bring about a ‘socialist Europe’.

Mr Salem has posted pictures of himself at various events staged by Labour MPs including lford North’s Wes Streeting – who retweeted his comments on Mr Johnson.

He is also shown with shadow chancellor John McDonnell in one photo.

‘He can make as many phoney announcements on the NHS as he likes but he can’t hide from the truth, or from patients.

‘The Tories have plunged the health service into crisis through years of cuts and privatisation and the Prime Minister can’t run from the consequences this has had for patient care.’

Responding to Omar Salem’s claim there were not enough doctors and nurses on a children’s ward, Alan Gurney, chief executive of Whipps Cross hospital, said: ‘We are constantly reviewing staffing levels on our wards to ensure our patients are safe at all times, but occasionally – as in fact happened on this ward last night – an unexpected emergency in one part of the hospital can cause a temporary pressure elsewhere.’

Theresa May unveiled plans last year to boost the NHS England budget by £20billion by 2023.

Downing Street said the government had recently invested another £1.8billion into frontline services and were upgrading 20 hospitals across the country. 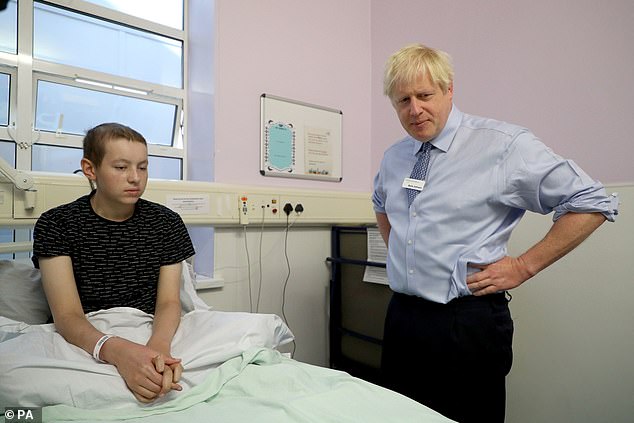 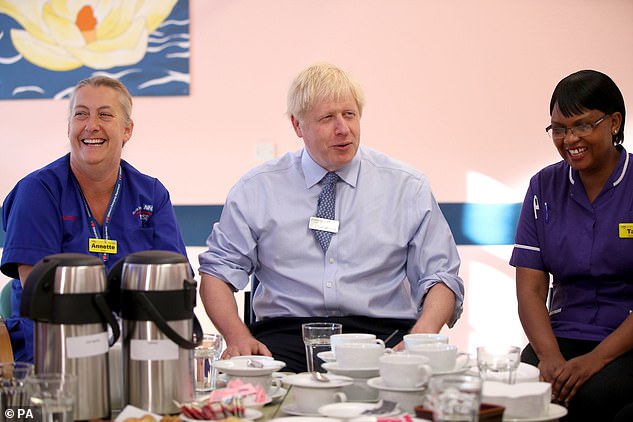 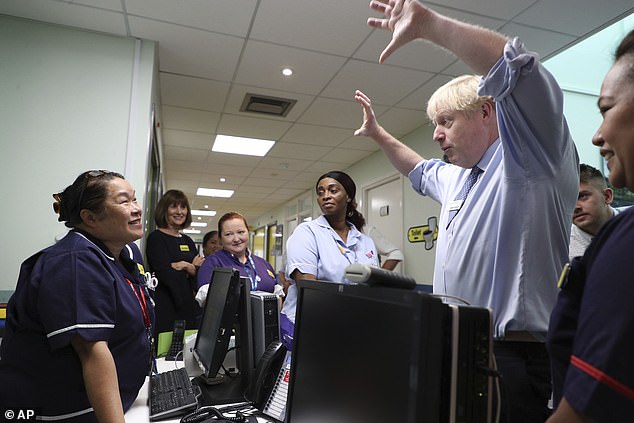