Boris Johnson is on course for a majority of 28, according to MRP model

Boris Johnson is on course to win the general election with a majority of 28, but his lead over Labour has shrunk in the final weeks of the campaign, according to the polling analysis which correctly predicted a hung parliament in 2017.

YouGov’s final MRP model predicts that the Conservatives will win 339 seats, with Jeremy Corbyn’s party on 231 and the Liberal Democrats on 15.

The forecast suggests the race has tightened since the previous MRP model on November 27 showed the Tories on course for a majority of 68.

YouGov warned that the margin of error could put the Tory seat total as low as 311, which would mean another hung parliament.

Boris Johnson is on course to win the general election with a majority of 28, but his lead over Labour has shrunk in the final weeks of the campaign, according to the polling analysis which correctly predicted a hung parliament in 2017

The seat-by-seat model, which is based on thousands of interviews, puts the Tories on 43 per cent of the vote and Labour on 34 per cent.

The Conservatives are predicted to gain 22 seats, including in Labour heartlands such as Ashfield and Bassetlaw, to regain the majority they lost in 2017.

A majority of 28 would be the Conservatives’ best result since Margaret Thatcher’s third election victory 1987.

However, their shrinking lead means that Labour are on course to retain Tory target seats such as Tom Watson’s former constituency of West Bromwich East.

Pollsters say Labour’s recovery has been strongest in pro-Remain areas, where their vote share has increased by an average of six per cent since the last MRP release.

Chris Curtis, YouGov’s political research manager, said: ‘Our latest and final poll shows that a small Conservative majority is likely, with the Tories taking 22 more seats than in 2017 and Labour losing 31.

‘This would be the best and worst results respectively for each party since the 1980s.

‘But the margins are extremely tight and small swings in a small number of seats, perhaps from tactical voting and a continuation of Labour’s recent upward trend, means we can’t currently rule out a hung parliament.

‘As things currently stand there are 85 seats with a margin of error of five per cent or less.’

Meanwhile, the Lib Dems are predicted to win 15 seats, a gain of three since the 2017 election.

According to the poll, the SNP are on course to win 41 out of 59 seats in Scotland, recouping some of the losses they made in 2017.

The previous model results two weeks ago predicted that the Conservatives would win 359 seats, compared to 211 for Labour.

MRP, which stands for multilevel regression and post-stratification, is used to predict results in individual constituencies.

The method came to widespread attention in 2017 when it correctly predicted that Theresa May would lose her majority.

Most polls had shown Mrs May on course to increase her majority after calling a snap election.

YouGov says that the model predicted the correct result in 93 per cent of GB constituencies two years ago.

The pollsters warn that the model is based on interviews conducted before polling day, pointing out that voters could change their minds before December 12. 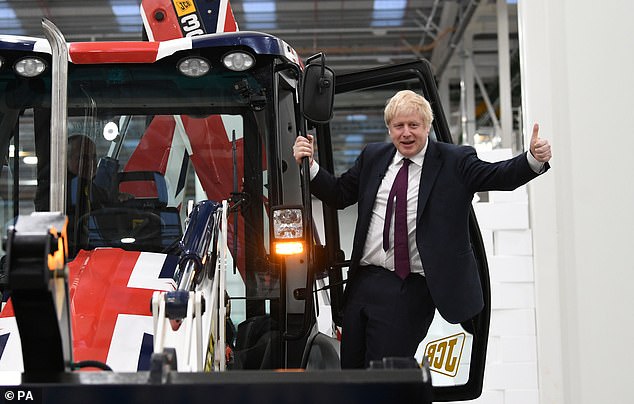 Boris Johnson – pictured after driving a JCB digger at a plant in Uttoxeter on Tuesday – is on course to win a majority, according to the latest polling analysis

New Commons speaker Lindsay Hoyle, who previously sat for Labour, is not being challenged by the major parties in his Chorley seat.

Meanwhile, voters in Buckingham will have a choice of major parties for the first time since 2005 after previous speaker John Bercow stepped down.

The penultimate day of the campaign was dominated by a secret recording of Labour frontbencher Jon Ashworth lambasting Mr Corbyn in private.

He also claimed the civil service would ‘move pretty quickly to safeguard security’ if the Labour leader became prime minister.

Mr Ashworth insisted he was ‘joking around’ but Boris Johnson immediately seized on his remarks to renew his attacks on Labour.

The PM used an appearance at a JCB plant near Uttoxeter to brand Mr Corbyn a ‘Hamas-backing, IRA-supporting, anti-Semitism-condoning appeaser of the Kremlin’.

‘Don’t just listen to me, look at what his health spokesman Jon Ashworth has said. He is absolutely right,’ he said.

Mr Johnson also provided a bizarre visual metaphor for his election campaign by driving a JCB digger through a wall emblazoned with the word ‘gridlock’.

The Ashworth row was a welcome change of emphasis for the Tories after an ugly row over the NHS on Monday.

The PM was widely criticised for refusing to look at a widely circulated picture of a young boy lying on a pile of coats at Leeds General Infirmary.

Health Secretary Matt Hancock was dispatched to the hospital in an attempt to defuse the growing media firestorm.

However, his visit prompted further acrimony when false rumours swirled that Mr Hancock’s aide had been punched by a Labour activist.

Labour accused the Tories of ‘bare-faced lying’ after footage showed that the encounter was no more than an accidental brush of the arm.

Polls open at 7am on Thursday. An exit poll prediction will be published once polling stations close at 10pm.

Votes will then be counted through the night and the national picture should become clear in the early hours of Friday.