Boris Johnson has today been spotted wearing exercise gear just days after he reportedly blamed his need for intensive care during his touch-and-go battle with coronavirus on his weight.

The Prime Minister is seen in pictures wearing a blue top, navy blue Bermuda shorts and a fitness watch as he returns to Downing Street after his morning exercise

It comes after the Conservative leader, 55, was last month rushed to intensive care after contacting Covid-19. 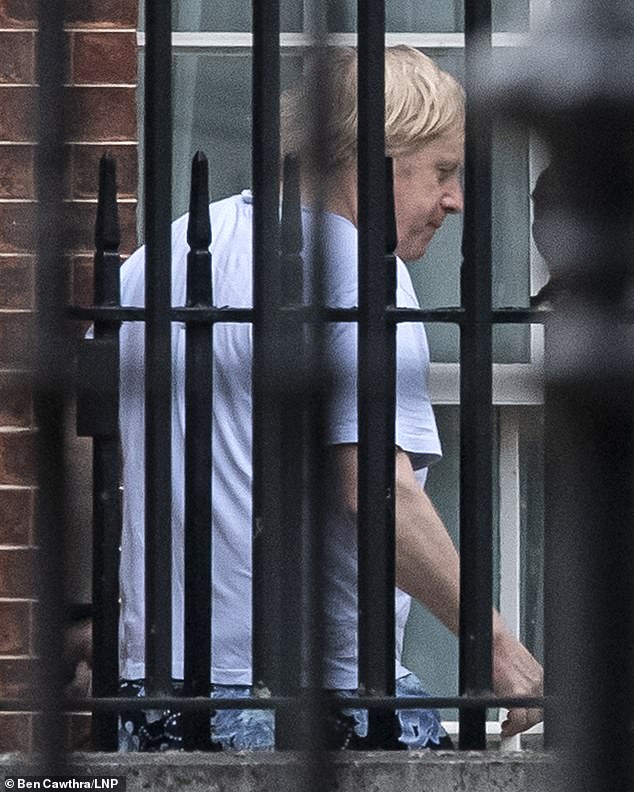 The Prime Minister is seen wearing a blue top, navy blue Bermuda shorts and a fitness watch as he was seen returning to Downing Street after his morning exercise

Mr Johnson was taken to St Thomas’ Hospital in London in April, 10 days after testing positive for coronavirus, and was moved into intensive care to following day.

He left hospital after a week of care, before later thanking NHS staff who he said ‘saved my life, no question’.

But reports this week suggest the Prime Minister had now pointed the finger of blame for his touch-and-go battle with coronavirus on being overweight.

According to The Times, Mr Johnson told some of his colleagues ‘it’s all right for you thinnies’ as he discussed the danger being overweight presents for Covid patients.

His own weight was 17-and-a-half stone before he went into hospital, putting his BMI at 36 when his 5ft9in height is taken into account and placing him over the BMI of 30 that means a person is obese. 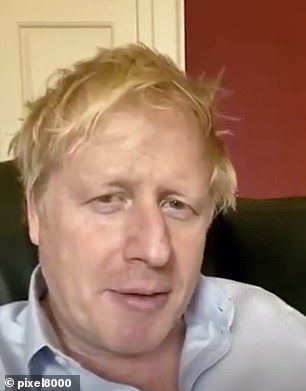 Boris Johnson was taken to St Thomas’ Hospital in London in April, 10 days after testing positive for coronavirus. Pictured: Mr Johnson gave an address to the nation while ill with Covid-19

Research shows being obese doubles the risk of needing hospital treatment for coronavirus.

This, sparked with his own personal battle, has is reported to have made the Prime Minister determined to use the coronavirus pandemic to get people to be healthier and is said to be ‘obsessed’ with getting people to cycle to work.

His swing toward interventionism follows a long-standing opposition to ‘nanny state’ measures and scepticism about the sugar tax, which he pledged to review, among other ‘sin taxes’.

It put him at odds with Health Secretary Matt Hancock, who firmly believes that the sugar tax – brought in back in April 2018 – has been a ‘total triumph’.

A major study in Glasgow last week found obesity may double the risk of needing hospitalisation for COVID-19.

And Oxford University research has found those who are morbidly obese are three times as likely to die of coronavirus.

For the first time, NHS England published a breakdown of deaths by pre-existing conditions. Only five per cent of victims didn’t have an underlying issue.

High blood sugar levels can weaken the patient’s immune system defence, making it slower to respond to viruses such as coronavirus.

It’s also closely connected with obesity, which has been recognised as potential risk factors for suffering severe COVID-19 complications. 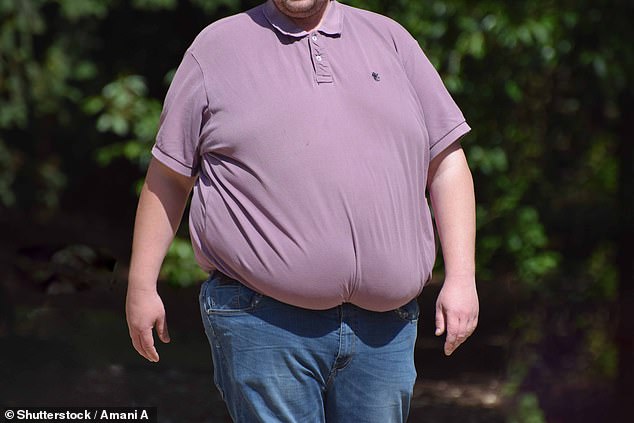 Doctors said diabetics would have better COVID-19 outcomes if they managed their condition properly.

The Government’s official death tally shows that 33,614 people have died of COVID-19 in the UK, including 24,100 in hospitals in England.

Diabetes is a common condition affecting an estimated one in 16 people in the UK. That includes both diagnosed and undiagnosed people.

Dr Hajira Dambha-Miller, a GP and specialist in diabetes, said she was not surprised by the data.

She told MailOnline: ‘People with diabetes are more susceptible to infections, even if we are not in the middle of a pandemic.

‘Diabetes leads to greater susceptibility to infection because there is more sugar for bugs to grow on and chronic inflammation means the immune system is slower to clear it.’

Dr Dambha-Miller said when someone has diabetes, their blood becomes ‘like treacle’ as a result of high sugar levels.

‘When the body does kick in, it won’t work as it should do. The immune cells are damaged because they’ve been saturated in sugar for years and don’t work the way they should.’

Meanwhile as the Government promised to ease the UK lockdown, the Prime Minister is also said to be keen on focusing on moving into a recovery phase for the UK and delivering manifesto promises.

He highlighted pledges such as introducing 20,000 more police officers and building 40 hospitals.

‘He was optimistic and focused on the future, on getting back to the levelling up agenda,’ a source told The Times.