Boris Johnson will hold potentially difficult talks over Brexit with Nicola Sturgeon in Scotland today as he begins a tour of the UK designed to underline his commitment to the Union.

The new Prime Minister will head north on the first leg of a tour that will also see him visit Wales and Northern Ireland this week.

Today he will declare himself a ‘passionate believer in our great Union’, as he unveils plans to release £300million for ‘growth deals’ in the three nations.

But he is facing crunch talks with Miss Sturgeon and Scottish Tory leader Ruth Davidson, who both oppose a No Deal Brexit.

Boris Johnson, pictured, will speak with Nicola Sturgeon in Scotland on Monday in the first stop on his tour of the UK which is mean to show his commitment to the Union

Mr Johnson will use today’s visit to attempt to reassure Tory supporters that the defence of the Union is a priority. Last week, Mr Johnson followed through on a symbolic pledge to add the responsibility ‘Minister for the Union’ to the Prime Minister’s official job title.

Can we afford PM’s pledges?

He has described his spending plans as ‘modest’. But an analysis of Mr Johnson’s pledges made in recent weeks suggests they could far exceed the £26billion so-called wriggle room said to be available in the public finances:

Today he is expected to say: ‘Our Union is the most successful political and economic union in history. We are a global brand and together we are safer, stronger and more prosperous.

‘So as we prepare for our bright future after Brexit, it’s vital we renew the ties that bind our United Kingdom.

‘I’m proud to be in Scotland today to make clear that I am a passionate believer in our great Union, and I look forward to visiting Wales and Northern Ireland to ensure that every decision I make as Prime Minister promotes and strengthens our Union.’

In a letter to the new PM last week, the Scottish First Minister warned she would demand a second independence referendum if Mr Johnson pressed ahead with a No Deal Brexit. Miss Sturgeon wrote: ‘Given your public comments about leaving with or without a deal, “come what may” and “do or die”, it is now – more than ever – essential that in Scotland we have an alternative option.’

Writing in the Mail on Sunday, Miss Davidson said she could not support a No Deal Brexit in any circumstances, pointing out that she is under no obligation to sign up to his timetable of taking the UK out of the EU by October 31.

She said the PM had her ‘full support’ in pursuing a revised deal which could ensure an orderly exit from the EU. But she added: ‘Where I differ with the UK Government is on the question of a No Deal Brexit.

‘When I was debating against the pro-Brexit side in 2016, I don’t remember anybody saying we should crash out of the EU with no arrangements in place to help maintain the vital trade that flows uninterrupted between Britain and the European Union.

‘I don’t think the UK Government should pursue a No Deal Brexit, and if it comes to it, I won’t support it.’

Miss Davidson, who played a key role in persuading Theresa May that a No Deal Brexit posed a risk to the Union, is expected to repeat the message to Mr Johnson. 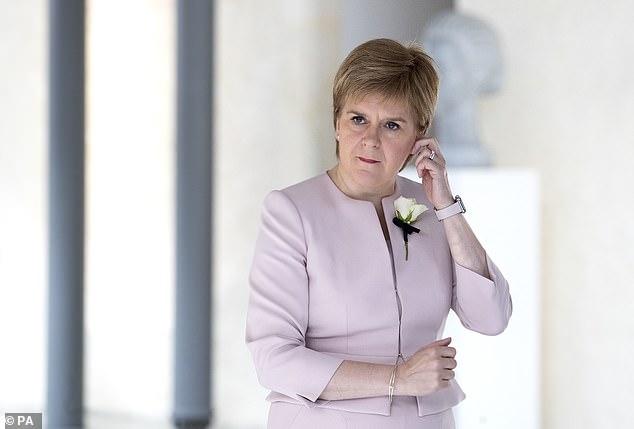 Scottish First Minister Nicola Sturgeon, pictured meeting the Queen last month, warned in a letter to the new PM she would demand a second independence referendum if Mr Johnson pressed ahead with a No Deal Brexit

A study by the Institute for Government today warns that Mr Johnson would have to impose direct rule in Northern Ireland after a No Deal Brexit because of the scale of the decisions required to be taken in the province, where the power-sharing assembly is suspended.

Cabinet Secretary Sir Mark Sedwill warned ministers this year that such a move could lead to demands for a referendum on Irish unification and another poll on Scottish independence.

Mr Johnson has insisted that Brexit will reduce support for Scottish nationalism as the SNP would have to accept the euro to join the EU.

Today’s £300million announcement will provide funding for ‘growth deals’ in a areas including Falkirk, Argyll and Bute, south-west Northern Ireland, the Causeway coast and mid-Wales. The money is for such things as housing, transport, training and green growth.