Boris Johnson has vowed not to ‘jeopardise’ British national security ahead of a crunch decision on whether to give Huawei a role in building the UK’s 5G network.

The Prime Minister hinted at a potential compromise agreement this afternoon which could allow the Chinese tech giant a role while also addressing US concerns.

Speaking in London this afternoon, Mr Johnson responded to claims that involving Huawei in the infrastructure would mean handing power to Beijing.

He said: ‘I think there’s a very, very important strategic win for the UK.

‘The way forward for us clearly is to have a system that delivers for people in this country the kind of consumer benefits that they want through 5G technology or whatever but does not in any way compromise our critical national infrastructure, our security or jeopardise our ability to work together with other intelligence powers around the world.’

He said the UK government’s decision on the issue – widely expected to be announced tomorrow following a meeting of the National Security Council – will enable ministers ‘to achieve both those objectives and that’s the way forward’.

He insisted there was ‘no reason why’ the UK could not have ‘technological progress’ while also protecting ‘security interests’.

The US administration has urged allies to ban Huawei from their infrastructure, claiming it would be a security risk – something the company vehemently denies – while there is also widespread disquiet among Tory MPs on the issue.

The PM’s comments came after Robert Buckland, the Justice Secretary, said the UK will ‘take into account the views of other sovereign states’ but ultimately the ‘decision we make will be based upon our own sovereign right to choose’.

US Secretary of State Mike Pompeo said overnight the UK faced a ‘momentous decision’ on Huawei ahead of talks with Foreign Secretary Dominic Raab in London on Wednesday.

Boris Johnson, pictured at King’s College Londong University today, hinted at a potential compromise which could allow Huawei to help build the UK’s 5G network while also allaying the security concerns of the US Robert Buckland, the Justice Secretary pictured in Downing Street on January 21, said the UK had a ‘sovereign right to choose’ whether to hand Huawei a role 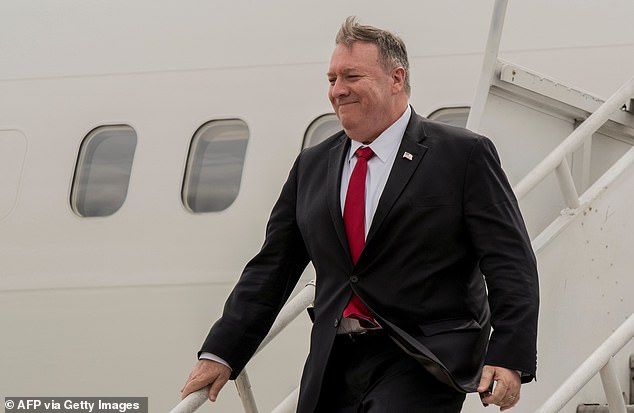 Why is Huawei’s involvement in UK 5G controversial?

Huawei has come under scrutiny over allegations of close ties to the Chinese state.

Founder Ren Zhengfei’s past links to the military have been cited as a concern, as has China’s history of state sponsorship and surveillance.

Chinese law can also compel firms to co-operate with Chinese national intelligence work, which some critics have suggested could see Beijing require Huawei to spy on people through so-called ‘back doors’ in its telecoms equipment.

Huawei has vehemently denied the allegations of any ties with the Chinese state and says it abides by the laws of every country in which it operates.

If the government does announce tomorrow – as is now expected – that Huawei will help to build the UK’s 5G network then the showdown between Mr Pompeo and Mr Raab could prove explosive.

Jeremy Hunt, the former foreign secretary, this morning warned it would be unwise for the UK to be ‘technologically dependent’ on another country while former defence secretary Penny Mordaunt also raised concerns amid a rising Tory backlash on the issue.

Mr Buckland told BBC Radio 4’s Westminster Hour: ‘The British cabinet has to act in the interest of the United Kingdom first and foremost, of course it will take into account the views of other sovereign states.

‘But as a sovereign state that has to place at the heart of its decision-making national security but also the wider interests of the country, namely the development of broadband, then we’ve got to make a decision calmly and dispassionately on the evidence.’

He said: ‘The UK has a momentous decision ahead on 5G. British MP Tom Tugendhat gets it right: “The truth is that only nations able to protect their data will be sovereign.”’

Why is Huawei so important to 5G?

Huawei has invested billions of pounds into research and development around 5G network infrastructure and, as a result, is now considered the industry leader in 5G technology.

It is also already part of the existing network infrastructure in a number of countries, including in the UK.

As a result, using one of Huawei’s rivals, and most likely alternatives – Ericsson or Nokia – for the building of 5G networks, would likely cause a delay and add cost to the introduction of widespread 5G in the UK.

In contrast, none of the four largest mobile carriers in the United States use Huawei equipment in their networks.

But Mr Buckland appeared to dismiss US concerns as he said it will be ‘Britain that will have to live with the consequences’ of whatever decision it makes.

‘All of us have to take that calculation in terms of our own national interest, that’s what we’re going to do,’ he said.

‘The decision we make will be based upon our own sovereign right to choose. It’s Britain that will have to live with the consequences of that.

‘There are risks but we will make an informed decision based on the evidence and we will do so in an autonomous way.’

Meanwhile, Mr Hunt cautioned against involving Huawei in the construction of the UK’s 5G network.

He told BBC Radio 4’s Today programme: ‘I must admit I always wondered whether it was wise to allow ourselves to become technologically dependent on another country, whichever country, for something as critical as 5G technology.

‘That is my view, but I would say if the decision goes the other way this week, as some of the signs seem to indicate it might, I hope there will also be some reflection in the US because we have never needed the Western alliance to be stronger than now.’ 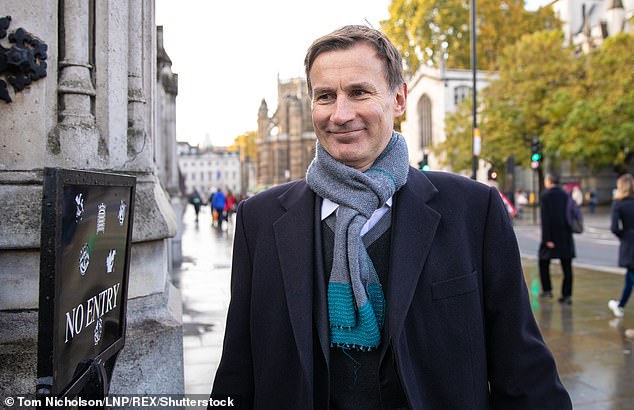 Jeremy Hunt, the former foreign secretary, questioned whether it would be wise to involve Huawei in the UK’s 5G network

Penny Mordaunt, the former defence secretary, this morning set out a number of concerns about involving Huawei in the UK’s 5G network

Mr Hunt said he does ‘accept the word of our intelligence community’, with officials of the belief that Huawei can be safely involved in building non-core parts of the network.

But he added: ‘But I think the issue is what happens if we get to the situation where no Western companies that are really able to compete with Huawei going forward and, like it or not, in a decade’s time people will look back and say “was this really wise to take this decision in 2020 that has led to this dependency?”‘

Ms Mordaunt said the government needed to consider more than just the security implications of handing Huawei a role in the 5G network.

She said: ‘Media reports about Huawei have focussed on how we can limit it to the non-core. That’s not the only issue Ministers need to focus on.

‘Do we value protection of IP and ideas? Do we care how a company treats its workers?

‘Do we value democracy & the good stewardship of capital? What are the standards, values and reliability we want from any company our national infrastructure depends upon?

‘Finally, what’s the alternative – the detail of what we’d need to do, with others, if we said no.’