Europe’s press waved goodbye to Boris Johnson as the Prime Minister resigned today, delighting in the downfall of a man who finally got Britain out of the EU.

‘Europe says goodbye to Boris Johnson without tears or sorrow,’ was the headline in Spain’s El Mundo, which said that ‘no one is going to cry’ for an ‘unscrupulous leader’ who ‘has left not a single friend or admirer’.

La Vanguardia, the main newspaper of Barcelona, recounted ‘eight months of heart-attack’ for the Tories since Partygate allegations first came to light – saying ‘scandal and controversy’ were the ‘tonic in Boris Johnson’s political life’.

Writing from Berlin, Tagesspiegel described Mr Johnson as a ‘scandal noodle’ and said those who have followed his career closely ‘are hardly surprised’ by the scandals that have followed him ‘for months and years’ but proved ‘too much this time’.

Ekstrabladet: Denmark’s main tabloid went with the simple headline: ‘Now he is done’ 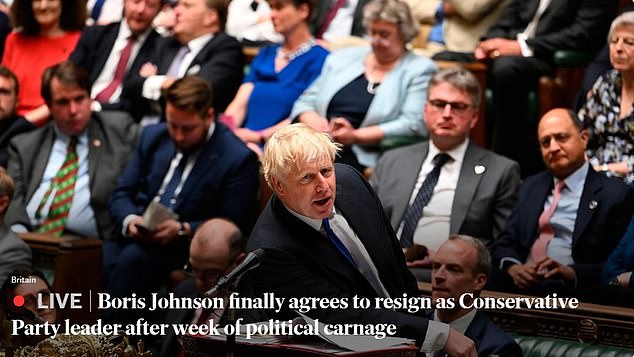 Irish Independent: Mr Johnson has ‘finally agreed to resign’, said the paper’s lead story, after a week of what it described as ‘political carnage’

Faced with accumulating scandals, a raft of resignations, and outright demands from his own cabinet to step aside, Mr Johnson defiantly clung to power through a day of extraordinary political drama on Wednesday.

But, come Thursday morning as analysts began to talk of a ‘constitutional crisis’, the Prime Minister agreed to fall on his sword.

Pablo Suanzes, Brussels correspondent for one of Spain’s largest papers, was among the first to react – saying the Prime Minister ‘has done nothing but accumulate firewood and light matches’ since taking power almost three years ago.

‘Smarter, more dangerous and less trustworthy’ than predecessor Theresa May, Mr Suanzes sums up two years of relations between the EU and UK under Boris as ‘a collection of deceptions, lies, vagueness, delays, lies and provocations’.

‘In Brussels the reaction [to his resignation] is almost indifference,’ he says. ‘There is little guilty pleasure in the downfall, without honor, of an unscrupulous leader.

‘He has left not a single friend, a single admirer or almost a single supporter, for himself, but almost also for the United Kingdom.’

Spain’s largest newspaper, El Pais, said Mr Johnson ‘has thrown in the towel’ and will resign ‘plagued by mismanagement of several scandals in the ranks of his party, in which he himself has been involved.’ 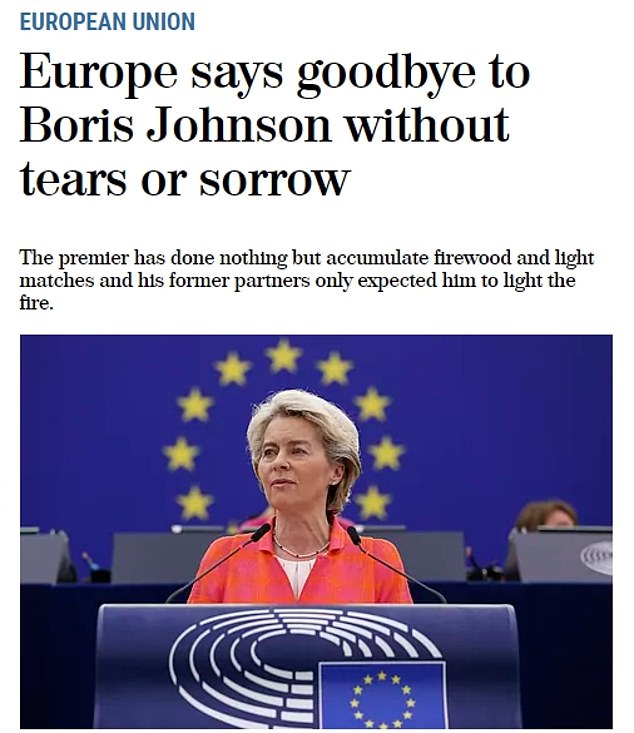 El Mundo: One of Spain’s largest papers said ‘no one is going to cry’ for Mr Johnson’s departure in Brussels, describing him as an ‘unscrupulous leader’ who has left ‘not one admirer’ 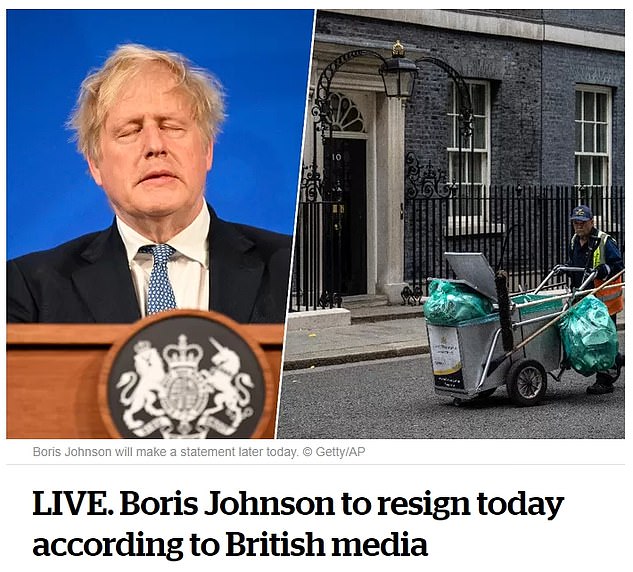 HLN: Belgium’s largest news site showed Mr Johnson being metaphorically taken out with the rubbish as he agreed to step down 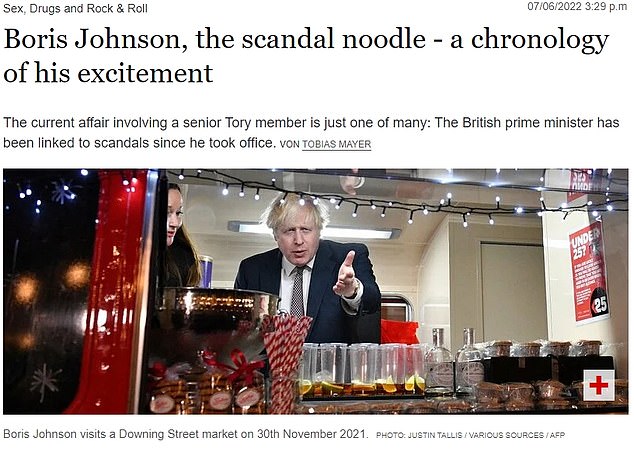 Tagesspiegel: Berlin’s main newspaper described Mr Johnson as a ‘scandal noodle’, saying it is ‘no surprise’ to those who have followed his career closely that he is falling from power

Boris has ‘finally agreed to resign’ wrote the Irish Independent, saying a ‘week of political carnage’ had left him with the support of ‘just 65’ out of his 360 MPs.

Several newspapers chose to trawl back through the list of scandals that have dogged Boris over the years, with Tagesspeigel referring to him as a ‘sandal noodle’ under the headline: ‘Sex, drugs and rock & roll’.

Recalling how Mr Johnson once admitted to smoking cannabis, it pointed out that he is ‘the first British leader on record to have broken the law’ after being fined over parties in Downing Street during lockdown.

Sweden’s Aftonbladet rounded up what they called ‘Bojo’s three years of scandals’ which they said included ‘lockdown breaches, luxury travel and mistresses’ money’.

Repubblica, one of Italy’s largest papers, said Boris was left with ‘no other choice’ but to step down following ‘an increasingly mad and paradoxical resistance’ which saw him ‘barricade himself in Downing Street’ even as his top team resigned around him.

‘Johnson had sought new ministers to replace them, but no one was willing to sacrifice themselves for a now discredited leader and a sinking ship,’ it said, describing Boris as ‘alone in Downing Street’ after a day of ‘absurd theater’.

The Prime Minister’s ‘incredible fall’ comes less than three years after winning the Tories their biggest majority since the 1980s, the paper adds, noting that he has turned ‘almost the entire party and 89% of Britons’ against him.

‘End of the line’, wrote rival paper Corriere della Sera, saying Boris will go into the record books as ‘one of the shortest-lived premieres in recent British history.’ 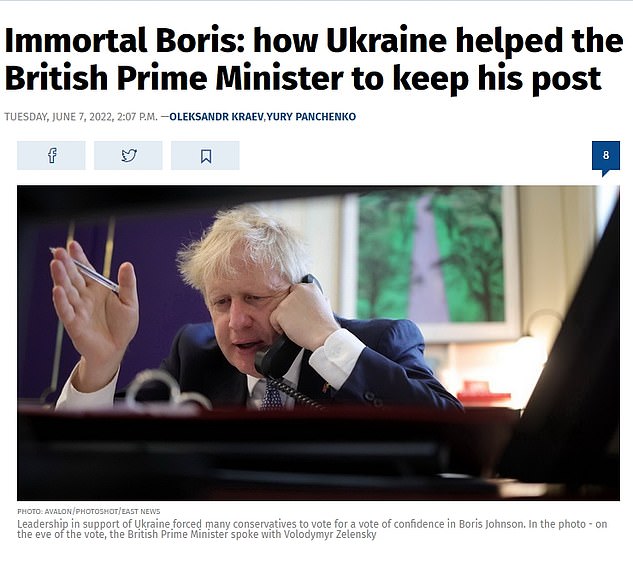 Euro Integration: One of Ukraine’s main news sites lamented the fall of the man they called ‘immortal Boris’, noting fears that a new PM will be less supportive of their cause

‘Boris resisted to the last, but a stench of decay spread around him,’ it added, before looking ahead to ‘months of political uncertainty’ and ‘economic crisis’ in Britain as ‘social unrest spreads like wildfire’.

But not everyone was so gleeful at his departure. Ukraine’s press – where Mr Johnson has earned a reputation as one of the staunchest defenders of the country’s liberty in the face of Russia’s invasion – were notably glum.

Less than 24 hours after running the headline ‘Immortal Boris’, Ukrainian newspaper Euro Integration was forced to report that he has agreed to step down.

‘Boris Johnson has been actively supporting Ukraine since the start of the full-scale Russian invasion,’ the paper lamented.

‘He advocates providing Kiev with sufficient military aid to retake all territories occupied by Russian forces, and has also promised billions of pounds in financial support.

‘In addition, Johnson has been to Kyiv twice since the end of February and held talks with Volodymyr Zelensky.’

Calling Mr Johnson ‘probably the most popular foreign leader in Ukraine’, it outlined ‘fears that under a new prime minister, Britain could adjust its foreign course and limit support for Kyiv.’